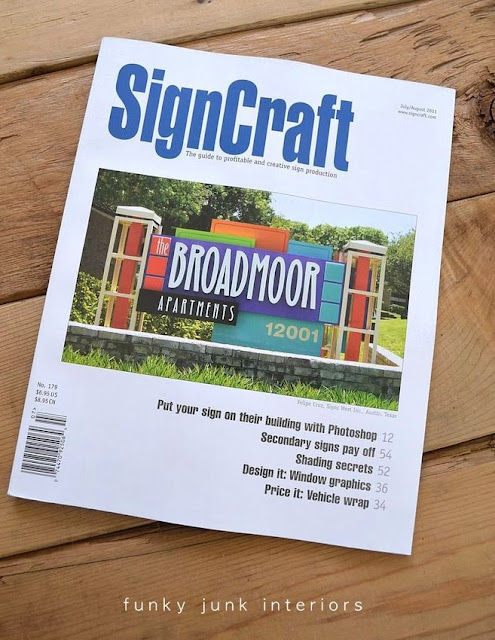 I’ve been in the sign industry for approx 20 years now. And one thing I never even ATTEMPTED was to be in a popular sign magazine that everyone but EVERYONE in my trade collects.

This mag is called SignCraft. And it’s a big deal in my sign world. Let me fill you in why I felt I never had a chance to be in this publication.

I was an independent type. Right after high school I bolted for the back door from home with my mom’s borrowed pots and pans wanting to make a life of my own.

I had just landed a full time job at a major department store which was a BIG KAHUNA deal in those days. So I knew I would swing the rent and started making my own path. I knew I could do it if I worked hard. No doubt entered my mind.

I remember this day clear as ever. The first night I was in my apartment, I went all out. I made a wonderfully massive meal of meatballs and all the fixin’s and smiled, thinking to myself, “I never wanted to do this at home and here I am in my own kitchen doing it. THIS IS COOL!”

The department store paid great! I was raking in the dough. After payday I’d walk through the store at the end of my day and knew I could buy this or that with my money IF I wanted to. But nope! I was into SAVING now. 🙂

It was fun for awhile. But then the store started shuffling, tossing me all over the place. I was in ladies wear, children’s wear, men’s wear, shoes (which I HATED except for the decadent leather smell in the stockroom) and luggage of all things. (eyes roll here)

I wasn’t loving it any longer, but it paid well, remember?

The best days I had were when I spent time in ladie’s wear. I’d display the clothes on the floor in a way to guide your eye towards the back walls. You did this with color.

But my very best days of all were when the store had warehouse sales. We could wear jeans that day and hand draw the signs. I’d make splashy graphics on all the tags and had a BLAST.

Well, it was a good thing I was saving all those coins because that full time job didn’t last forever. I was put down to part time.  Store restructuring. I was DEVASTATED.

But I knew I could make it so I started selling Mary Kay Cosmetics on the side.

I did REALLY well. My parties were only suppose to be approx 8 people and I always booked in about 20. 🙂

And then I got rear ended.

I was off work for about a year, battling with lawyers. I fought every day I was suppose to be healing but that’s the way that game is played.

When it was time to come back to work, I wasn’t doing all that well. My injuries played a big part in taking it easy, so I stayed on part time and did the best I could.

But there was something funky going on with that store and they weren’t saying much. I had a bad feeling it was going under, so I started looking for other work. But this time it wasn’t about the money. I wanted to be happy.

Dare I look into a sign shop?!? I told myself why the heck not, and did it not knowing squat about the profession.

I took a drastic pay cut and went to work for my first sign shop. I hadn’t even touched a computer before but they taught me the basics I lit up like a Christmas tree and proved to be a real go getter.

And the department store? It went under.

And then the sign shop let me go. Without me understanding why.

But no matter. I was determined to find something else right away. And did. I landed working in another sign environment that same weekend, but this time on vehicles.

With very little training, I was sent on the road to stripe vehicles. I worked on commission so if I worked hard, I earned. So I sorda taught myself and became pretty fluent at it. And did really well.

And then they let me go.

It was a small family run company and I really think they just wanted it to remain so.  I chose to walk away and resolved to rethink my chosen career path. Sheesh.. maybe I couldn’t do this after all.

And then I saw an ad in the paper. It was for a graphics class for half a year. Really?!? Well, I can do this! I mean, who’d fire me from school? 🙂 I signed up and got in while drawing in unemployment. I bit the bullet and purchased my own sign equipment and learned by day and practiced at night. I read every manual I could get from the library and eventually surpassed the sign class. I ended up teaching the class what I learned myself at night.

One day I remember the instructor holding up SignCraft which I had heard of. I glanced through those glossy pages and felt, “Wow…  that’s quite something to be that good!” But I told myself I could do this.

Remember that commission job I had previous? I visited each client and won them over. It wasn’t hard. They were frustrated I just vanished and were told I quit. No matter. They became my new clientele. I also pounded pavement for only 3 months and then the return work followed. (and I’ve never looked back)

My biz led to eventually me teaching at the college that taught me, plus a storefront and employee. It grew so quickly I remember my accountant’s eyes when he saw the numbers. It gave me a feeling I’ll never forget.

I eventually did some travelling, meeting up with a group of great sign folks just like myself. I became part of their fray and made a lot of life long friends. And most of those friends landed in Signcraft.  I really was among incredibly talented people! And I remember thinking there was no way I could ever rank high enough to land in that magazine.

Know, lots more water went under the bridge at this point and others, however the most vital is when my marriage ended and I had to move with young son in tow. I was scared we wouldn’t make it. My total focus became about my son and his well being.

To my astonishment, the phone kept ringing.  Work kept coming. I did what I needed to in order to survive but being a single parent was a big responsibility I took seriously. So I didn’t try and win awards or anything. I just did my work so I could parent my boy.

Then the big year long renovation happened to the house. After that was complete, I started playing with decorating and fired up Funky Junk.

It was then I started to work part time for friend Dan.  Dan is in SignCraft every month so it was rather fascinating to watch over the process of writing and photography and so forth.

While Funky Junk grew, so did my confidence. Dan taught me how to work with tools and I learned to play with my camera and honed my writing skills to the point where Dan noticed all the sign related things I was making, and encouraged me to submit to SignCraft.

I laughed and put it off for a good long time. But I started getting in other magazines at this point. So all I could do was try right?

What they hey… I think I can… 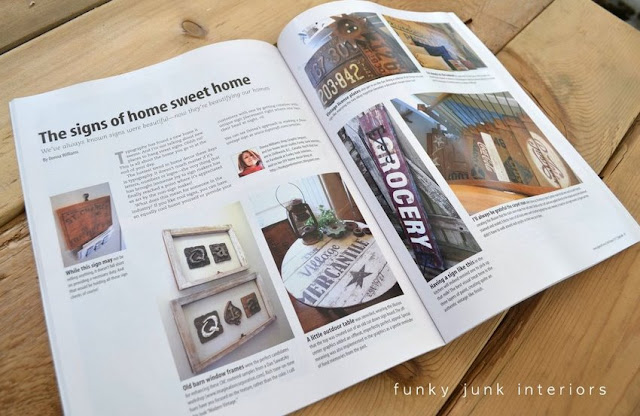 YES I DID!!! I landed in the July/August edition. But not really as a true blue signmaker.

I got in as a signmaker that used signs to decorate her home. 🙂 The passionate loophole that created the “I know I can” magic. 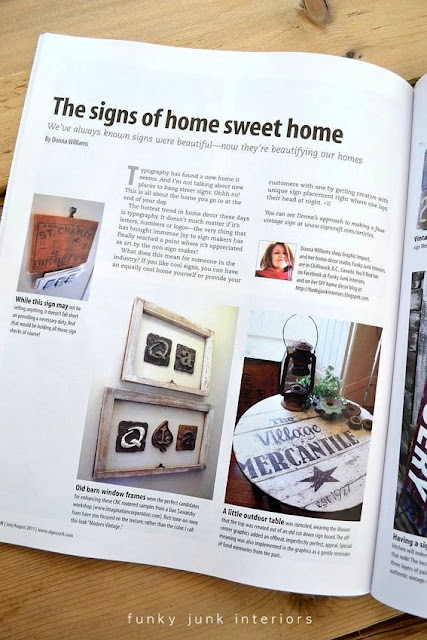 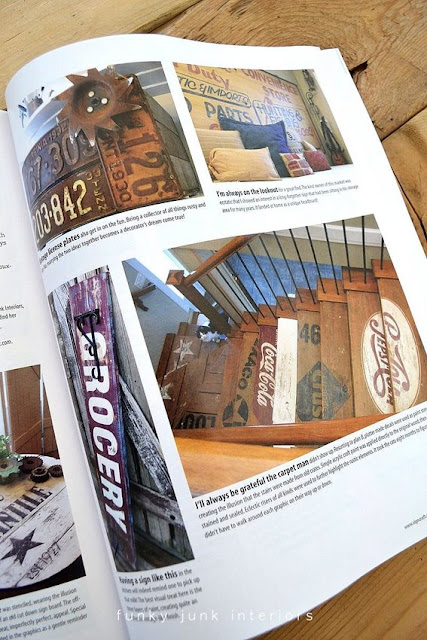 To read the article, you can view the actual magazine PDF HERE. 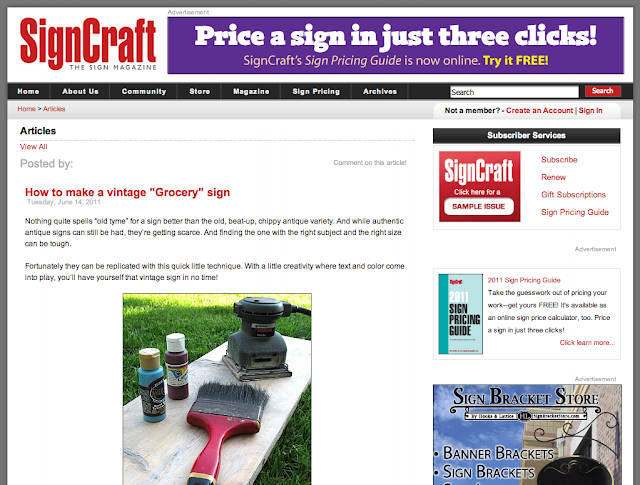 And not only did Tom give me a two page spread, they also featured an online tutorial of my Grocery sign.

So how do I REALLY feel about this major feat? 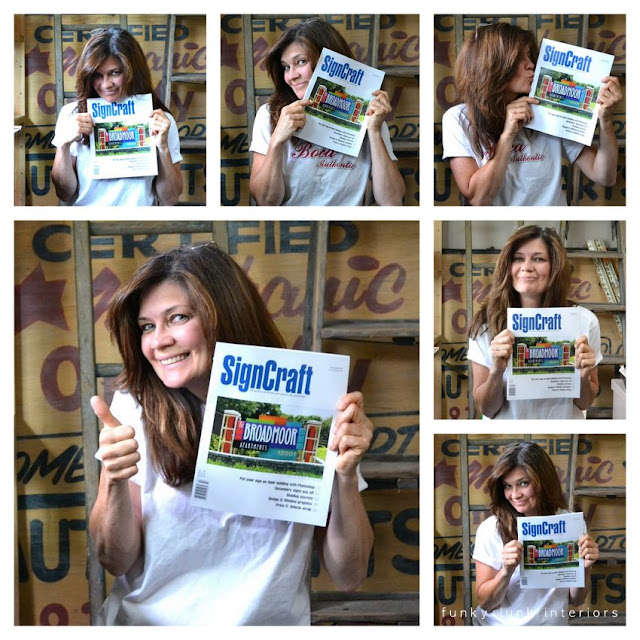 It’s a total honor and privilege to be among such talented signmakers in SignCraft! Thanks Tom!

You think you ‘can’t?’  I challenge you to think differently.

I mean, how much more proof do you need? 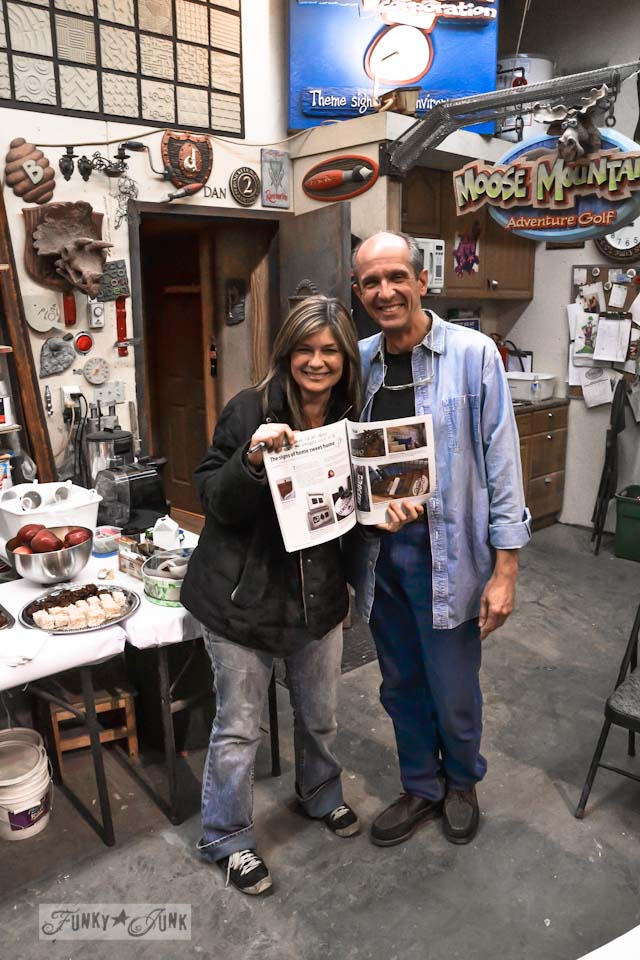 But the story doesn’t end there…

Read Part 2 – When Signcraft came to visit my house…

A message for those fearing to be different
The modern vanity that amazingly became so much more
When one simple thing gets published
Somerset Home magazine worthy junk... x 3!
My stencil's 15 min of fame... and a little chit chat
A ladder laundry room shelf for Country Woman Magazine
Facebook Pinterest Twitter Google+ RSS
Categories: Press
Tags: magazine, magazine features, SignCraft
102