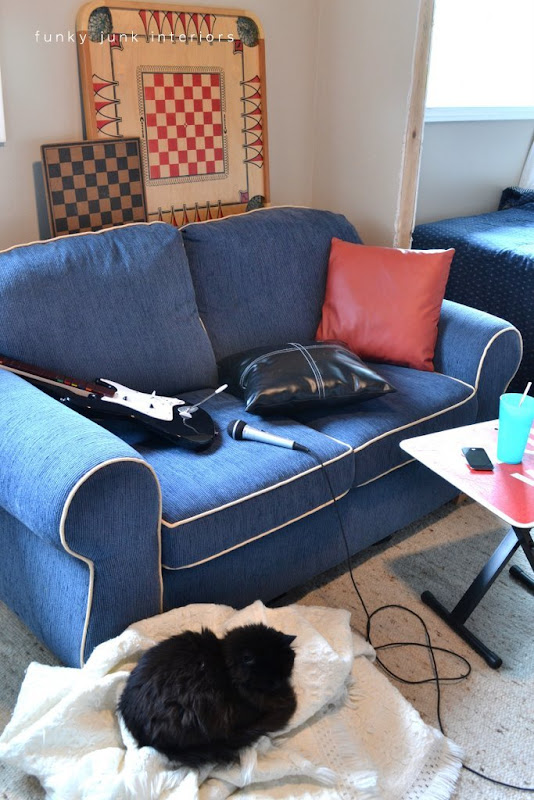 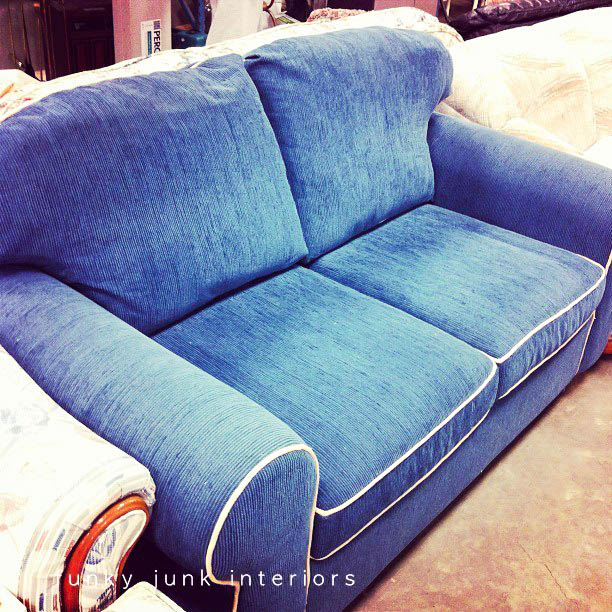 So, remember the little blue couch I landed at the thrift last week? It needed to come inside the house.

Sadly, I didn’t have room for it. What I did have in the way were big oversized furniture pieces that have been sitting in the hallway for MONTHS.

Confession. I really REALLY hate asking for help. Honestly, if a strong handyman or 10 knocked on my door every single day, I’d keep them running. So let’s just say, I do way too much silent suffering just because I’m a little stubborn and feel silly ‘asking’. 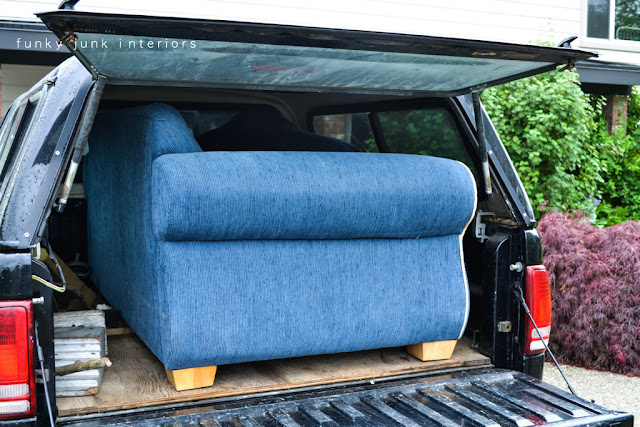 I actually laughed when the thrift store loaded the couch because I was thinking, “I sure have a whole lotta unloading to do before this thing gets near the front door!”(really meaning, asking for help.. augh!)

So my son was really tired today after a full unexpected cadets run. But when he saw the couch in the back of the truck, he sprung into action. He needed to make money NOW for his new gaming system so he can use the couch in his room!

He decided to mow the lawn down the road which meant we needed the back of the very full truck for the lawnmower. (groan…)  So both of us heaved the thing out of the truck and let it CLUNK onto the driveway and sped off. (sorry neighbours… all we were missing was the sunken treasure toilet on the front lawn)

I returned and scratched my head… how on earth would we get this thing upstairs ourselves?!

Well, we couldn’t. So I eyed up the neighbourhood wondering who the unlucky chosen would be this round. (yes I do rotate requests for help but don’t tell anyone) H and G ( I’ll ask if I can swap out their letters for names) were nattering with some friends outside, so I bit my bottom lip and head their way.

So the two guys come over and see the couch on the driveway. They lift it and start to throw it into the back of the truck…

So they stuff it into the room without issue. I’m ecstatic! Except for the fact that all that huge stuff that was in the house was now clogging up the living room.

Negative. Ah well. Plan B now in effect, whatever that is.

I go and mess around with the new couch when I hear a knock on the door. Turns out the neighbour WAS interested in the armoire after all! No way… no way!! I just think neighbours wive’s make the most amazing choices. 🙂

(poor) H comes over with the dolly, I run out to pick up my son, and once I’m in the driveway, we swap out the lawnmower for the 20 trillion ton TV Hank also brought down for me. YES YES YES!

My son sees the couch in his room and is over the MOON. So now he’s  REALLY antsy to earn his Playstation. “Mom, I want to work. LOTS!”

I ended up with our lawn mowed AND trimmed, and my truck vacuumed out. He was going to wash it as well but just ran outta gas. But wants to continue tomorrow… (I reward him for over the top help and I have plenty let me tell you)

(we are also saving for a bigger flat screen TV)

And here is our perfect little blue couch sitting in it’s new home. The one that improved this room,  helped our neighbours and motivated my son. And gave a new landing place for our cat. 🙂

Visit all instalments to the Boy’s Room HERE