3 short years ago, I lived in a house made of tumbling bricks. Meaning, the place was falling apart. I didn’t know how to fix anything on my own, because I never had experience in doing so.

And then I picked up a drill. It was a blue Makita cordless drill with a cute little LED light. It fit my hand like a glove, and I fell in love.

Once I grabbed hold of that first power tool and a mentor that had faith in me, I set about getting familiar with tearing things apart, and building them back up again. It was like a massive impossible metal door had just unlatched, and the more I did, the wider that door opened.

I learned how to do some welding and helped to weld the base of a parade float.

I learned how to work with tools and helped to build several large props for a mini golf.

I learned that my ideas were encouraged and worth hearing.

I learned how to say yes to an amazing group of people that wanted to help me.

I saved and learned what tools to buy so I didn’t have to keep borrowing others.

I learned to build some of the ideas that resided in my head, with tools and wood and everything.

I learned it was ok to upgrade your computer after 3 borrowed craptastic laptops. Because you’re worth it.

I learned that it was ok to loosen the death grip I had on new blog earnings (the fear of poverty runs deep) to buy my first SLR camera.

I learned to start taking better pictures by spending the time, fighting the battles from having no idea what I was doing to being stunned when something actually worked.

I learned it was ok to have a different decorating style than I’d ever seen out there.

I even learned I’d get sought out for certain opportunities because of it!

I said yes to opportunities to write.

I said yes to opportunities to fly and meet up with those that supported and followed my journey.

Know what? I’m glad I was broke and was absolutely FORCED to push my creativity. Otherwise Funky Junk Interiors would never have happened. 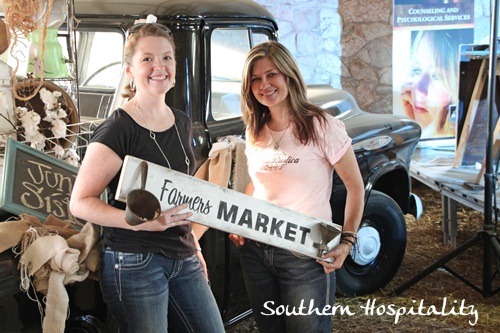 These days I’m 50 years young (sorry, it’s not my birthday, I have edited to reflect that!) and basically have this new life. I now look at a project and have the confidence to know I could make it if I really wanted to. I could photograph it and maybe even get it published somewhere. And whatever I do, buy, go or try, it all has to do with what some may deem as work. Wow. Dream talk! How did all that happen?

It all started with a drill.

And permission from myself to say YES.