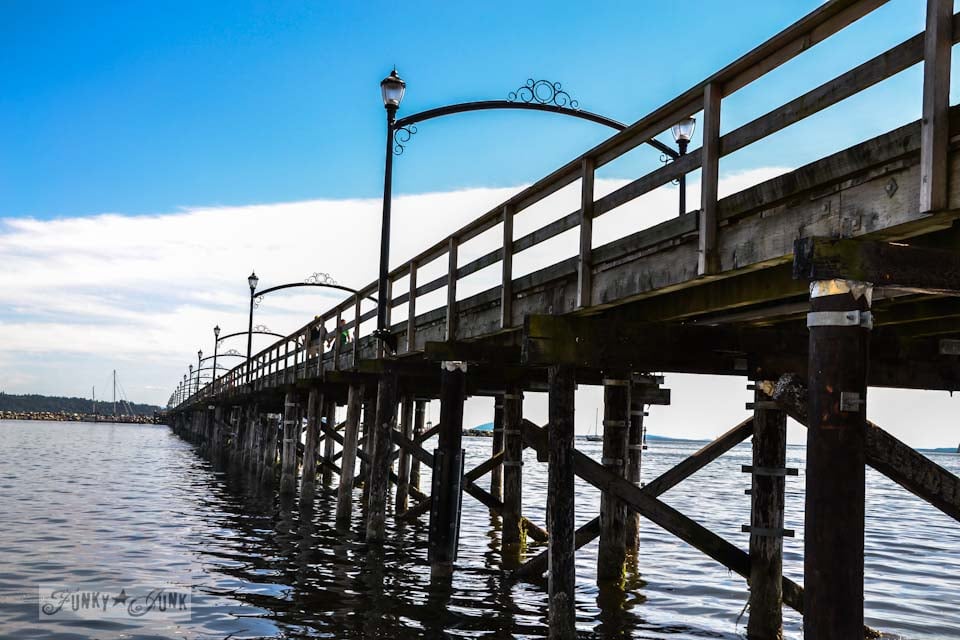 My son rolled his eyes… we at times have these AMAZING plans that don’t pan out. But not this time.This was gonna be great!

Spur of the moment trips dictate picking and choosing something close by. No prob! We only were due for 1 sunny day anyway, (we pay dearly for our greenery) so we decided our adventure would take us to the cute little seaside town of White Rock, BC.

White Rock is kinda located nearish to Vancouver if you look on a map. It’s very close to the Washington border. So close in fact, that the main route getting there is called 0 Avenue. It’s a road that runs parallel and right next to a US road. Seriously… you could walk across. I don’t know how people don’t because one could. Anyway,  I meant to take a picture of how crazy this sounds but I was going to on our way back, because we had it aaaallll planned out you see… 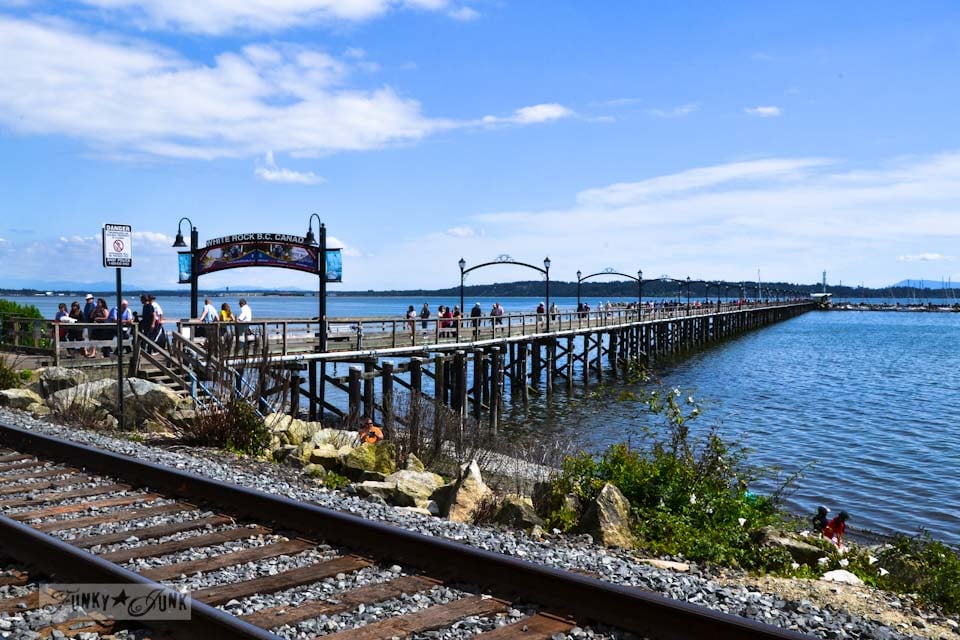 Anyway, I’m terribly directionally challenged, so I decided to study a map before we took off. After I got a glimpse of our route (5 pages of drawn glimpses to be exact), we set out. Yes, I had the GPS, but sometimes that thing takes us to places we don’t want to go… 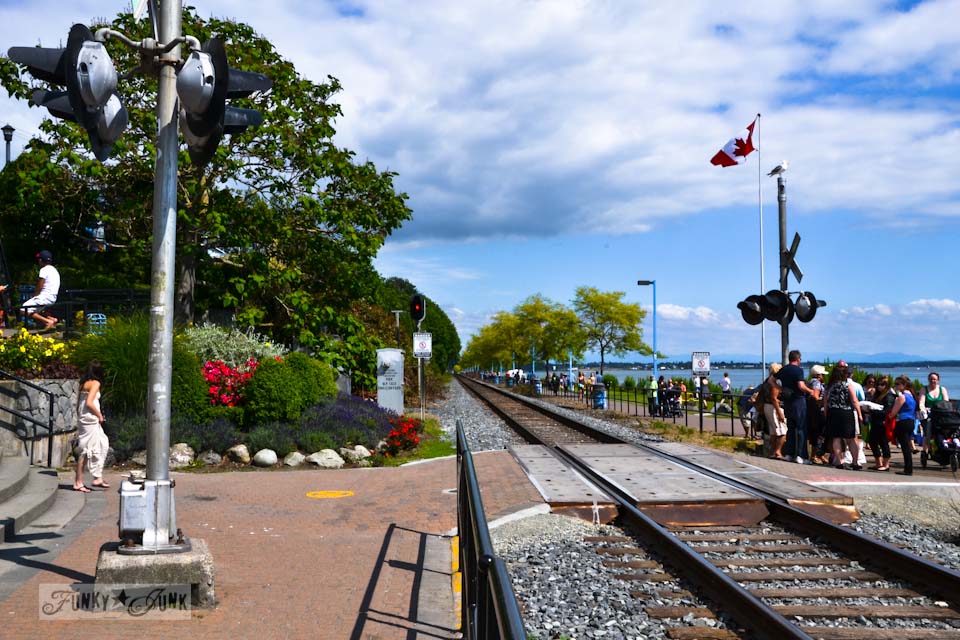 And as luck would have it, the GPS started coughing up all the wrong directs. “In 300 metres, turn left on blah blah blah…” squalked the automated voice.

“Mom, why aren’t you turning? You’ll get LOST if you don’t turn!”

“No no, I know… I studied a map. This thing is trying to take us to all the side roads… I really should stop and adjust that…” 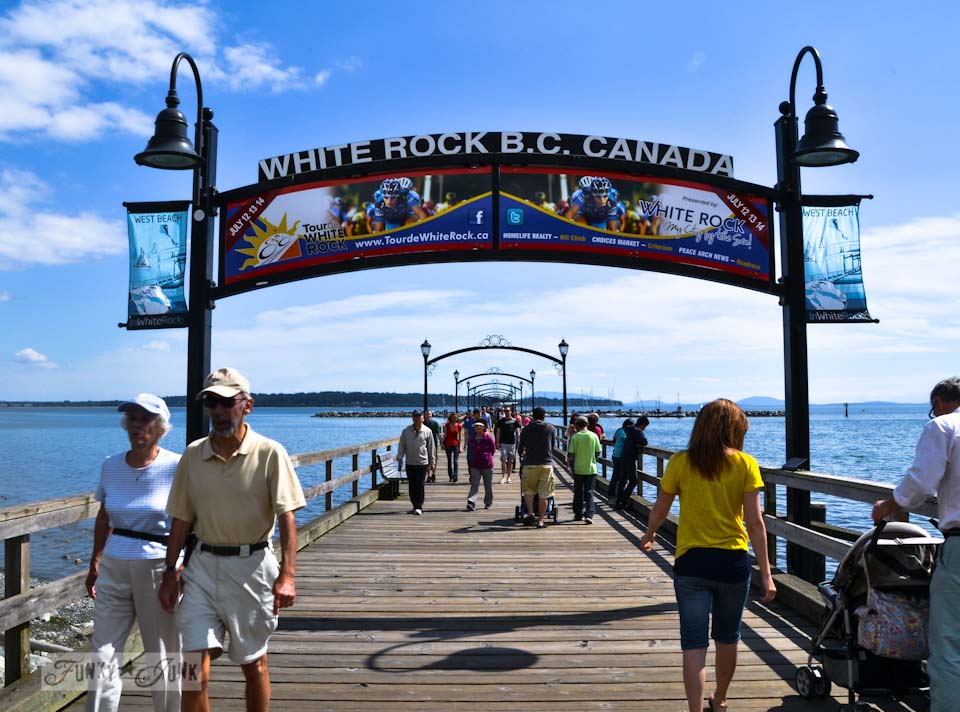 And we DID get there! Trust me when I say, that kinda thing makes me GIDDY. I don’t know where anything is so to even get down the road at times is miracle making at it’s best. So we found a parking place.. hmm… it was very full. But we found one! And I even prepared… had the right coins for pay parking and everything. See? I had a handle on this day! 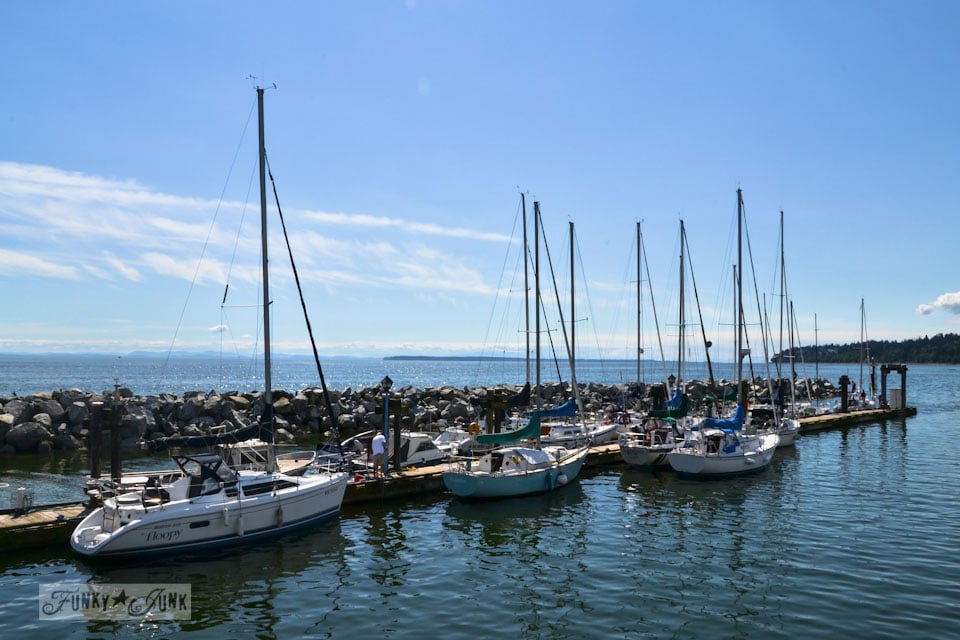 “Plunk plunk plunk” went the coins. All $9.00 of them. But… they didn’t take. Don’t you hate that when those machines don’t work? It basically ATE my coins. No return and did not register as paid. Seriously?! They were all the coins I had too! 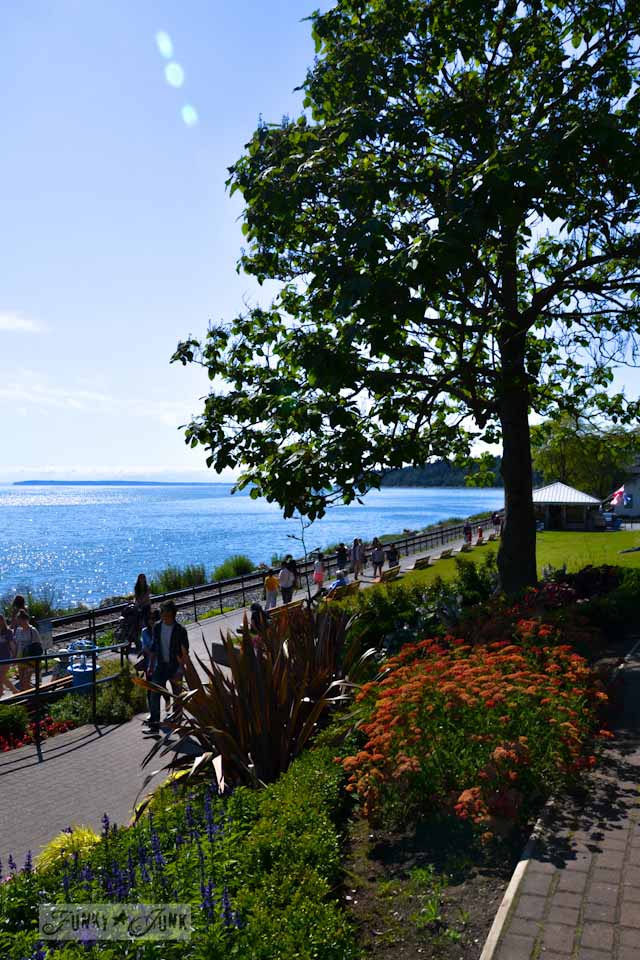 “IT ATE MY COINS!” I exclaimed, afraid to go down the road for more in case they towed me away. (son rolling his eyes again..)

By pure luck, the parking police (?) approached me with, “I would have never believed you if I hadn’t seen it for myself.” He signed my ticket so we were good to go. I smiled.. yup, this day WOULD be awesome! 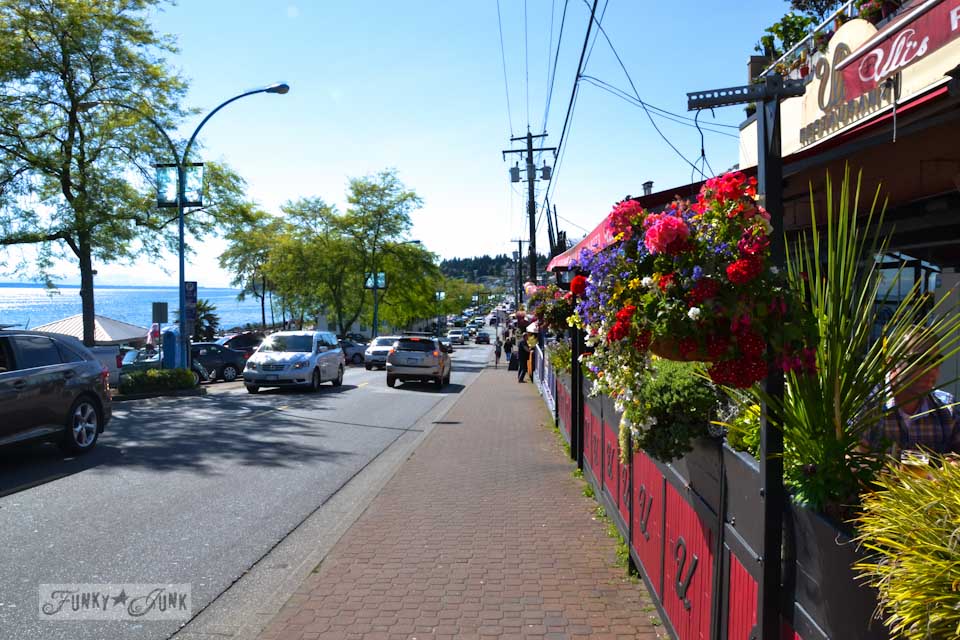 So first things first, we head for something to eat. White Rock is known for their amazing fish and chips, so you can bet that’s what I ordered. And yes, they were DELISH. The fries were so fresh they melted in your mouth. I don’t remember any fries I’ve ever eaten doing that. But these did. 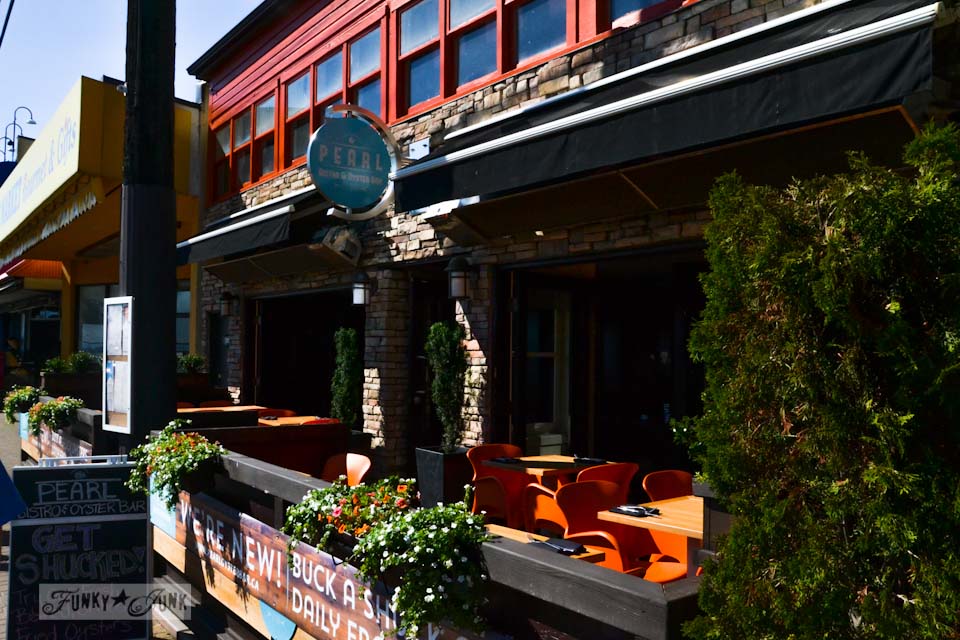 This wasn’t the place we ate at (I think that pic is in the iPhone???) but whatever. The entire beachfront was filled with cool open air restaurants like this so you could take in the gorgeous view. 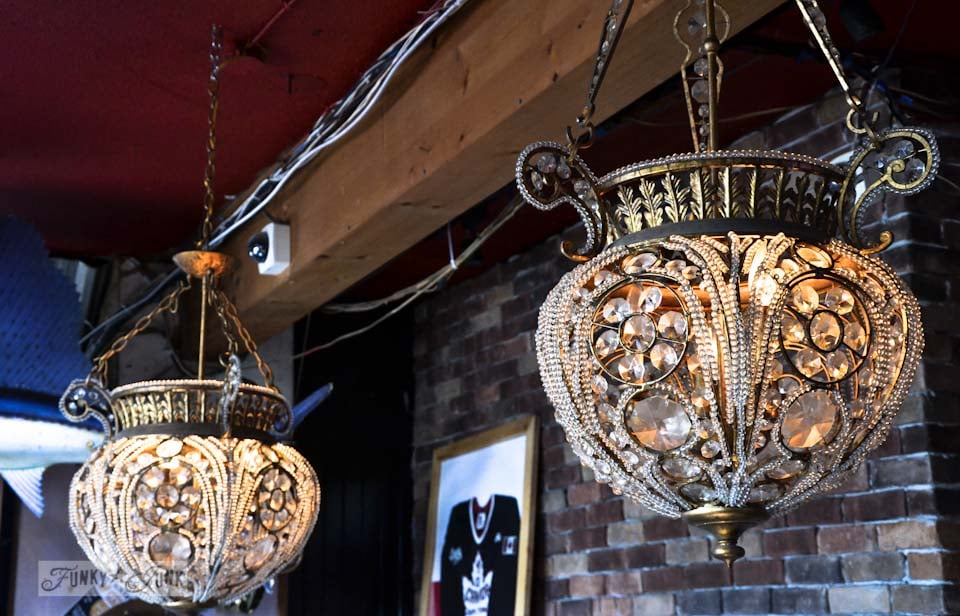 Aren’t they beautiful?! I knew you’d appreciate them so I fussed with settings on the big gun camera after much debate. 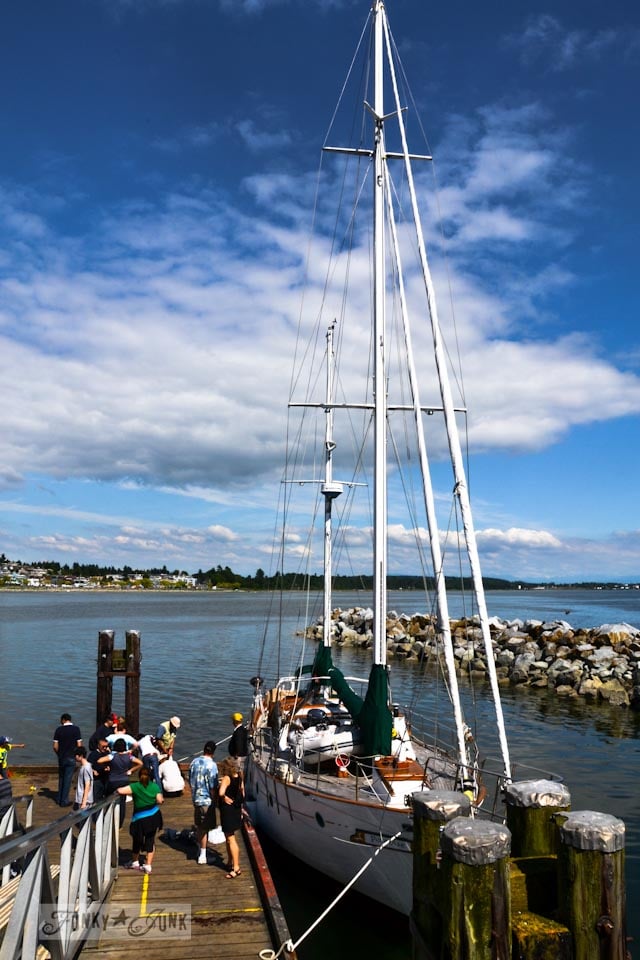 Time for a walk… let’s check this place out! And it was pretty… so so pretty. I adore the water, but admit to being more accustomed to lakes. This was the OCEAN so it was very special. The air was filled with salty sea air. The day was warm, but the cool breezes off the ocean created the perfect day.

“Mom, what’s THAT smell… it smells rotten or something…” 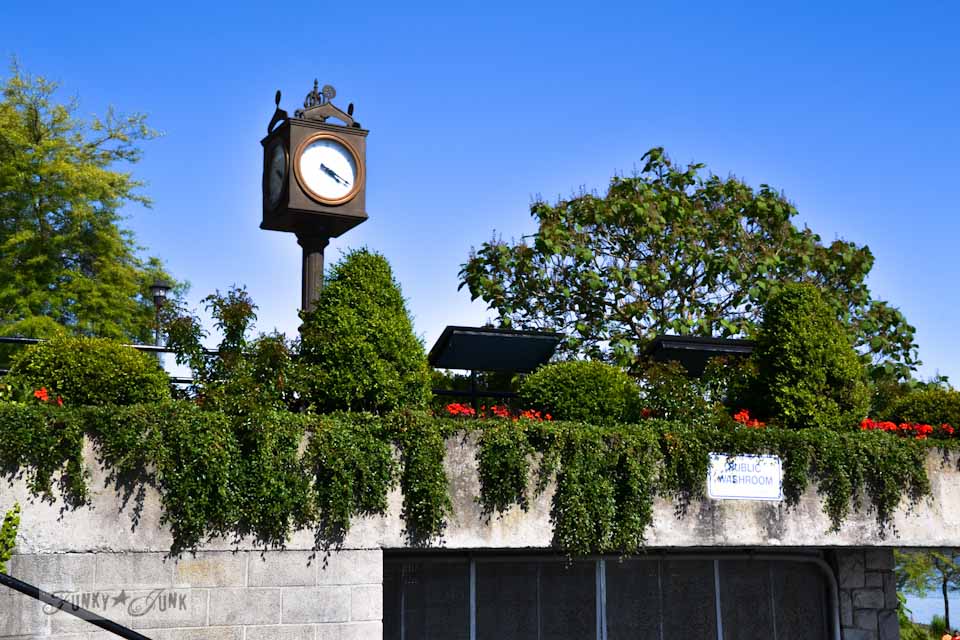 Like any seaside town, the coolness is all along the beach front. Beautifully groomed and lush parks and landmarks were dotted along the entire seawall. But we wanted to hit the beach. So we walked down towards the water and realized there was no sand at this part… (that should have been a hint!) 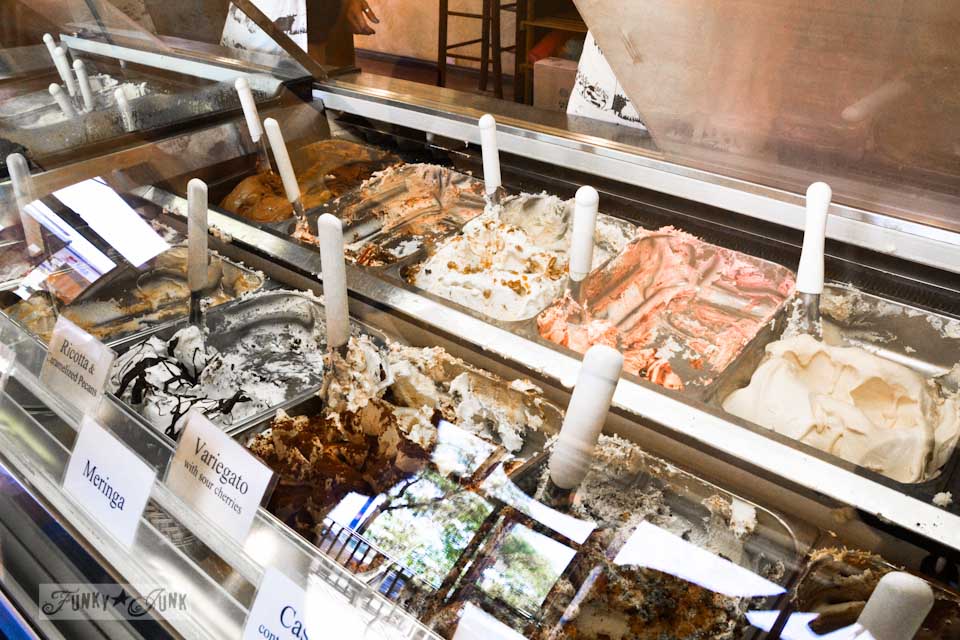 Oh no worries! Let’s grab a gelato on the way to the other side of the beach area. It was pretty warm out… this would be nice. 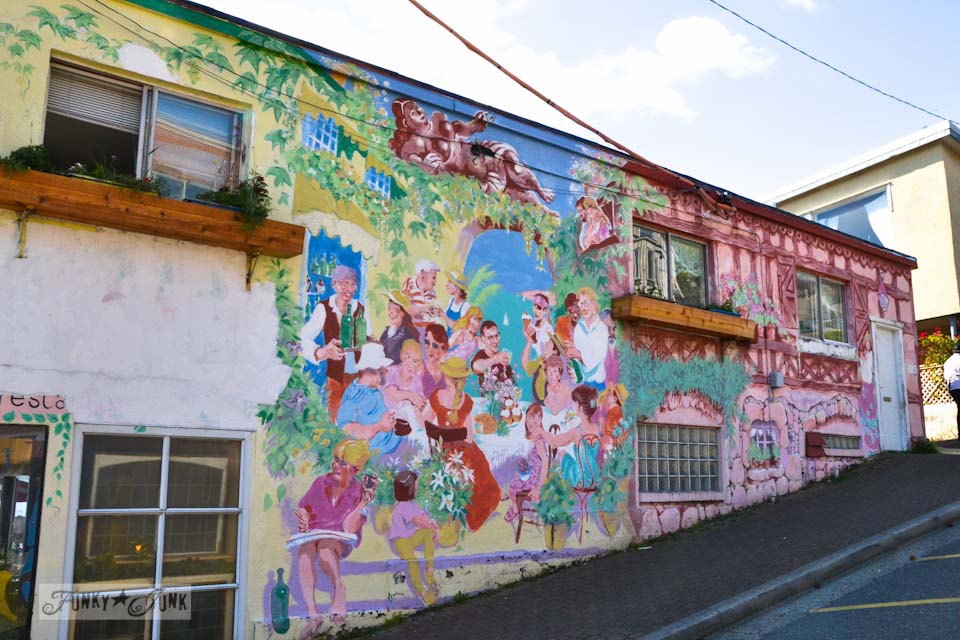 So, we head towards the beach, taking in some shops and sights along the way. 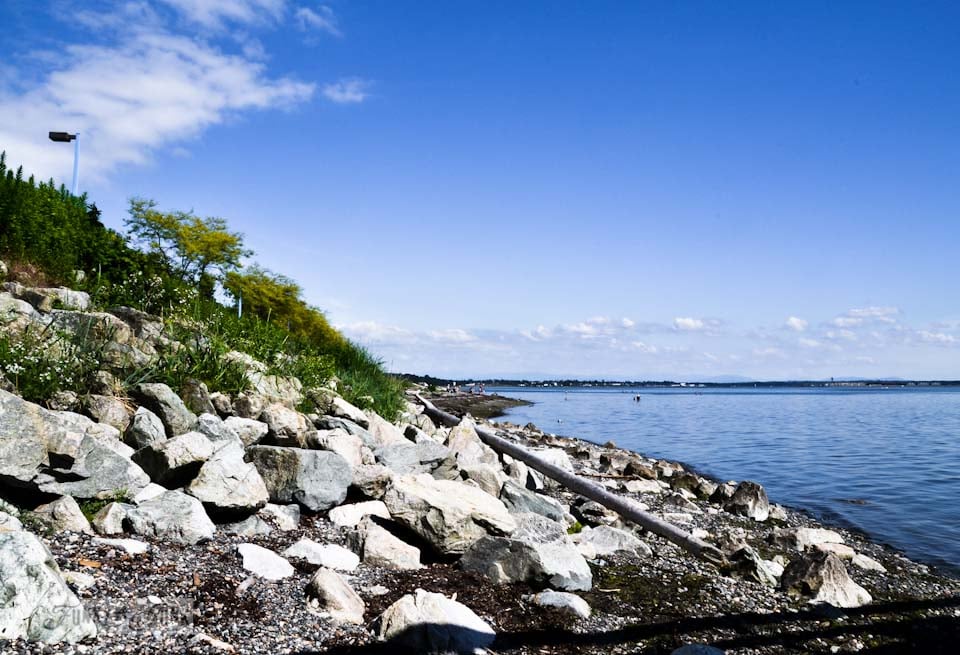 Ahhhh… water! Let’s go for a wade… but… no. The coastline was covered in thick seaweed. 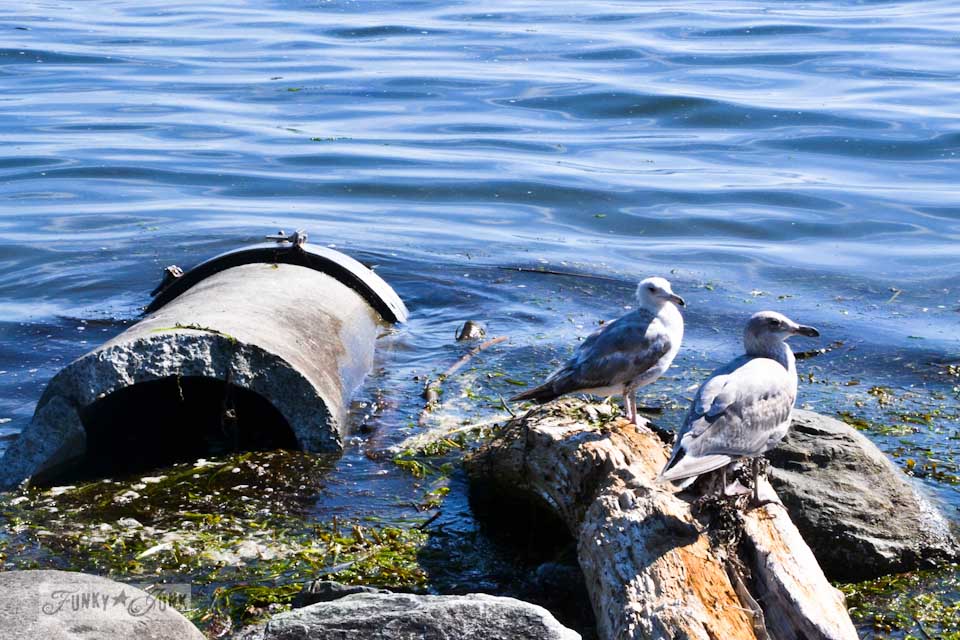 Oh, right. The tide is IN. Lake people don’t think of tides. There was basically no beach to be seen at all. Rocks and sea weed. So because we couldn’t cool off, maybe we could sit under a tree… hmmm… no trees on the beach. Hmm…

Son wasn’t crazy about this ordeal at this point. “So we can’t even find crabs or shells?” Hmm… not really.

Hot. It was HOT. I looked at the water, wishing I had worn my flip flops I had in the truck. Not that it would have mattered. I couldn’t fathom feeling a thick sponge of seaweed squishing between my toes… um… no.

“Bye bye ocean! Next time we see you, we shall visit you when the tide is OUT.” So we picked up a couple bottles of water and head out.

But I wasn’t quite ready for the day to end. I secretly hoped we’d come to a special landmark on the way home to add to our adventurous day. But I need not have worried… our day was about to get a little longer.

The silly GPS was spitting out the wrong directions again. But I had a handle on things! I had a MAP(s).

“But I’m sick of hearing that voice… In 300 metres….. turn left….. RECALCULATING…” (doing the perfect mechanical voiceover complete with hiccups when it can’t pronounce right)

“Well, just turn down the volume. But just leave it on…”

But something was strange. I was trying to reach 0 Avenue, my newest BFF road that got us here. The avenues were getting larger yet we were going in the right direction…

“Something’s wrong… the roads are wrong…”

“Are you getting LOST?”

“No! We have the GPS if I do… no, this is right. But why are the roads growing and not shrinking? I don’t get it.”

I pause… but then do it, shaking my head thinking… I’m cooked.

Well, our adventure brought us to  who knows where…  ever rely on the GPS, and while it generally always gets you out, you end up going through these neverland roads that haven’t been inhabited by humans in quite some time? Yes, those. HOOPED to the rafters I was.

And then there’s nothing like when the GPS tells you to go straight, but there’s a HUGE cement wall right in the middle of you route with the road continuing on the other side… but the GPS not being human or in panic mode at all, cannot see beyond this. It just taunts you with “RECALCULATING” because you’re now driving in wild circles that never seem to end.

So I did what any person trying not to lose their mind would do. I laughed.

“WHY ARE YOU LAUGHING? I don’t get adults. You should be wondering where you are!”

I have NO idea how we got out of that spirograph, but I ignored the GPS a few times to TRICK IT. Yes, you can trick them by ignoring them! And it worked! It led us down some pretty crazy streets (including some private construction driveway with empty sheds and trees with no leaves on them????) but we got out! And got home. Just not down 0 Avenue.

Are you still reading? I just scrolled up and noticed I wrote a BOOK. 1521 words so far. That’s ridiculous. Oh well. Thank-you for your thoughtfulness.

So… we got home. And were EXHAUSTED. But it was a good exhausted. Kinda. WhiteRock is beautiful. You should go! 🙂

I dream of hitting the wide open road with no route in sight. (bet I wouldn’t get lost that way!) It’s truly on my bucket list. But man, it’s a tad stressful getting lost even if you are in your own country. So… now I’m second guessing the big pie in the sky adventure of no destination.

Unless we had a driver… yeah… that would work! Anyone have all the time in the world on your hands, don’t need to earn a living and would be willing to drive a junker and her son around the world hitting major hot spots? I know my chances are just excellent…

But for now, we’re going to keep attempting these spontaneous day trips to new discoveries right in our own back yard. I mean, if we can’t even figure that out, maybe we shouldn’t go further.

But then maybe we will… time will tell…

25 thoughts on “The White Rock adventure… with one crazy story”