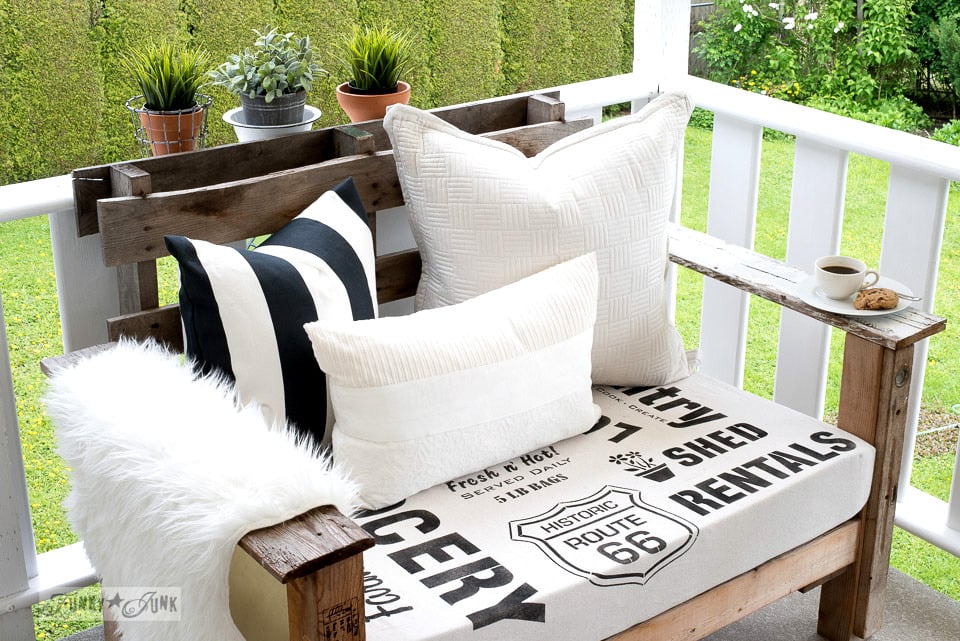 Blame this one on Bliss Ranch’s AMAZING chairs.

And then came I Restore Stuff’s crazy cool carpet.

Oh my goodness. I resolved to try those ideas somewhere! I just didn’t know where yet.

Until this past week… 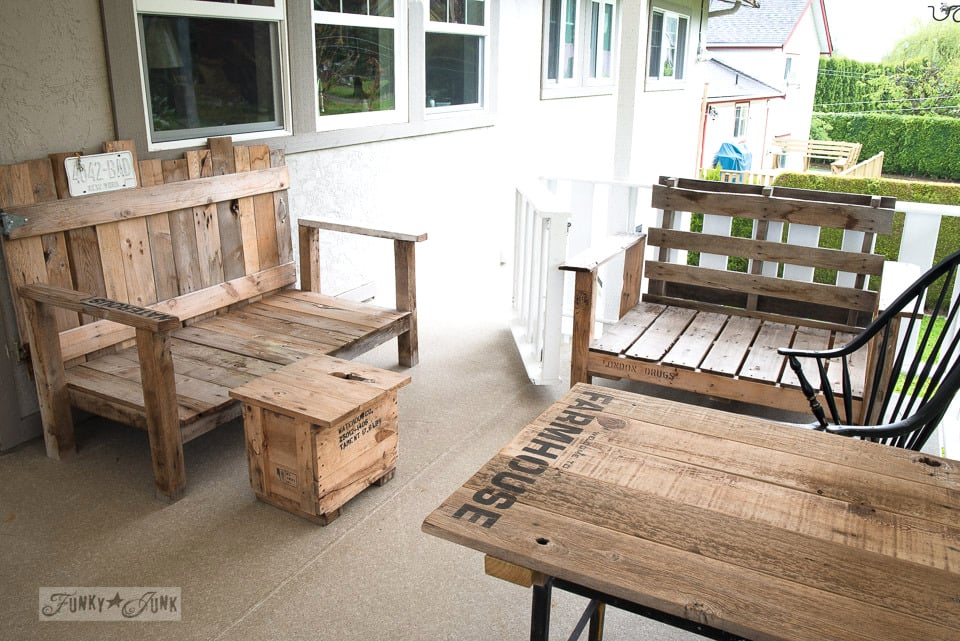 As you know from my last post, I just finished pressure washing the entire backyard area. First hit was the patio.

Oh how I LOVE the patio at this stage! It means anything is possible!

While I was pushing everything back in place, I sighed. I wanted something fresh and different from last year.

So I snooped through my linen closet, hoping for something to just magically jump out and yell, “I’ll work!”

Nothing. Not a sound was heard.

Until my eyes landed on an old, repeatedly washed painter’s drop cloth. 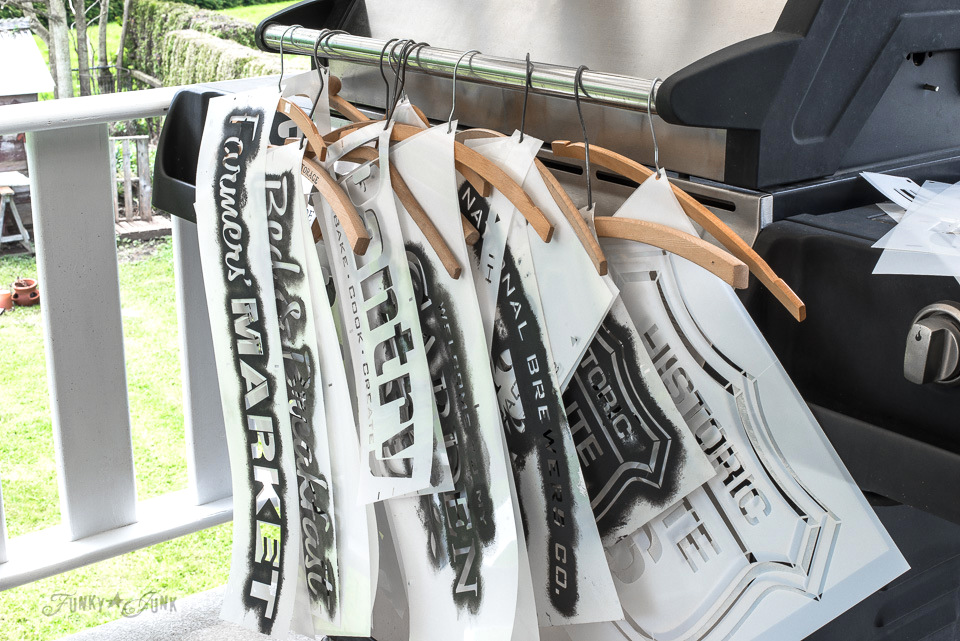 And just like that, those two inspiring projects that were on my mind had me sprinting for every stencil I owned.

The grill has never looked so… creative. 🙂

Armed and ready, this stenciled fabric totally transformed the look of the chairs, and was so fun and easy to make!

I really think this is my fav patio update thus far!

Here’s how I did it…

A random board for underneath the stencils 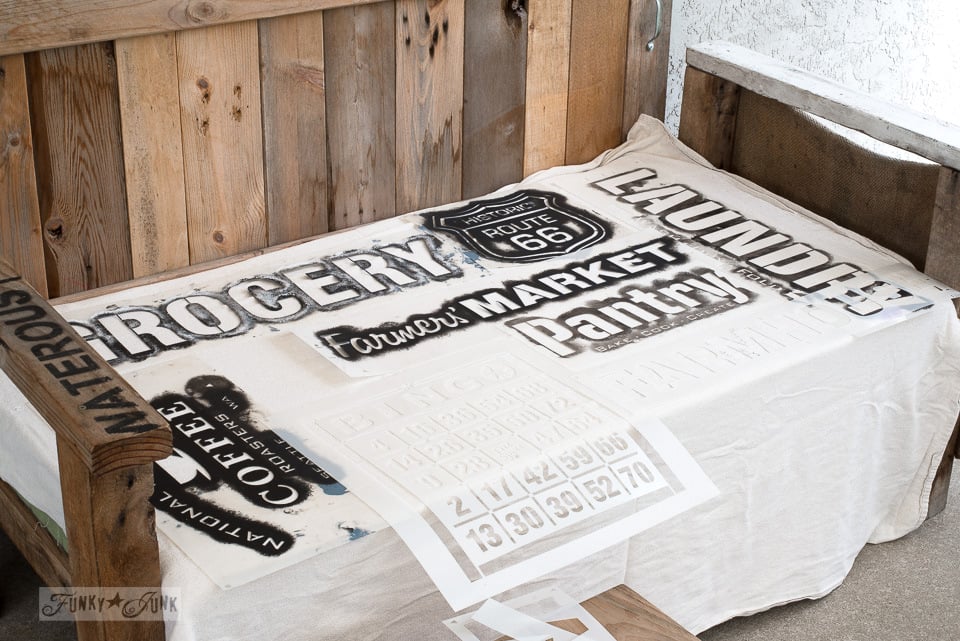 2. Position stencils where desired on the drop cloth.

3. Placing a board underneath to avoid bleed, stencil each design, using a very dry brush to ensure crisp, sharp lines.

Tip: While the stencil placement looks pretty random, there was some thought behind it. I rotated bold vs. thin letters, then designs vs. words. Some stencils also aligned against each other.

Since the fabric is so absorbent, the stencil lines were super sharp and went on flawlessly!

If one desired to sew, they could create a fitted sheet of sorts out of it. But since my sewing machine is MIA…

I just folded the fabric around the foam mattresses. It stays put pretty well! 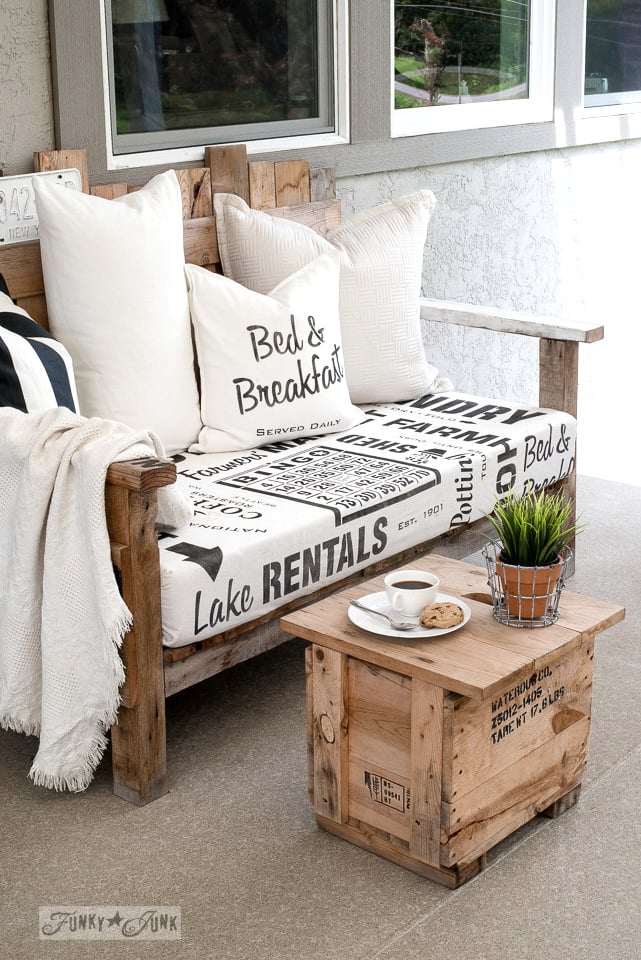 A few pillows later, this pallet sofa was ready for coffee time! 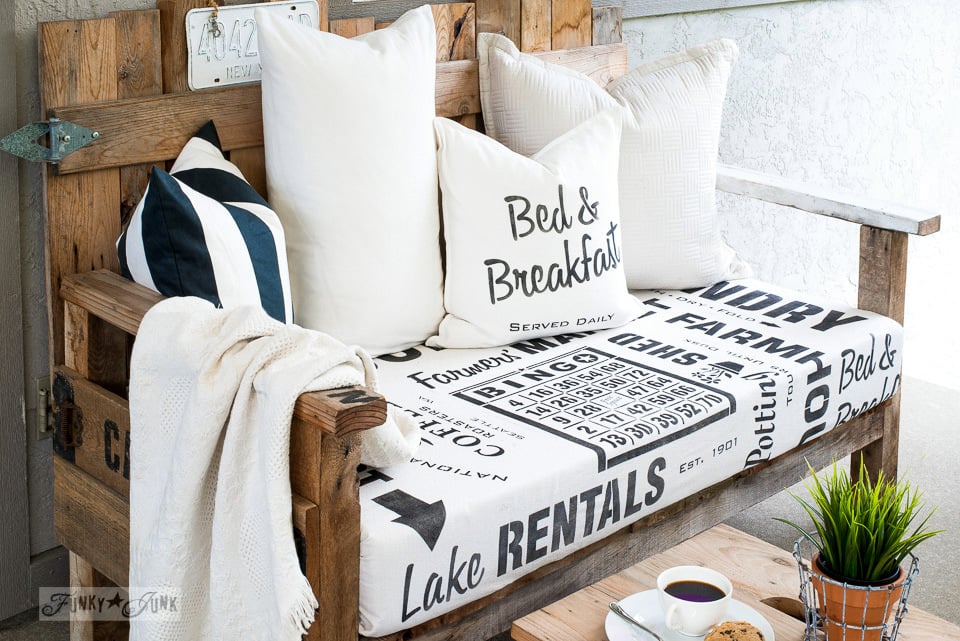 You’ve seen the Bed & Breakfast pillow in my bedroom before.

As well as the crate coffee table.

And of course, the tutorial for the pallet wood sofa is HERE. 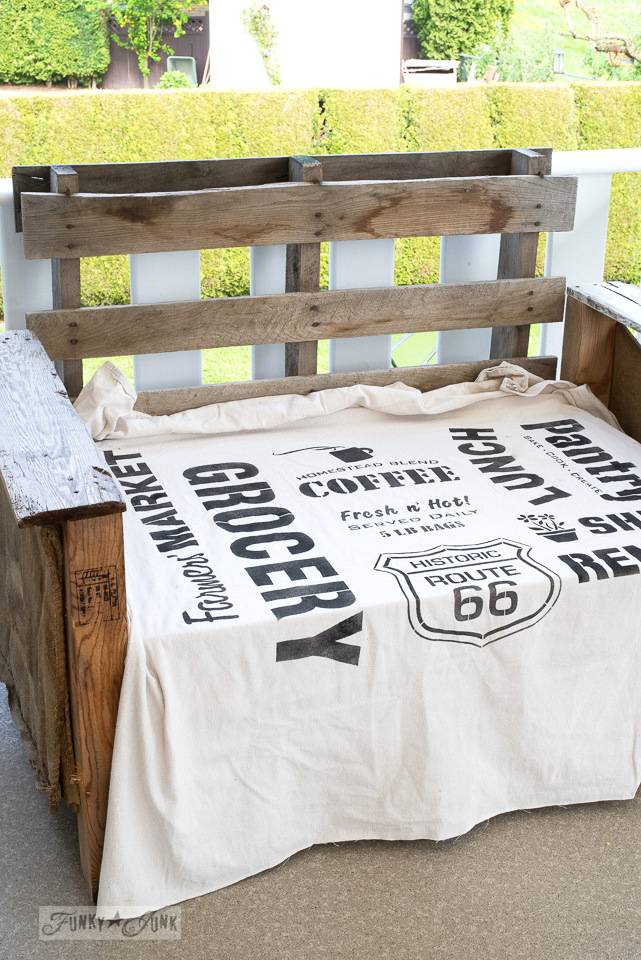 The pallet wood chair was next!

A few different stencils were used to vary things up a little.

With all the same steps taken…. 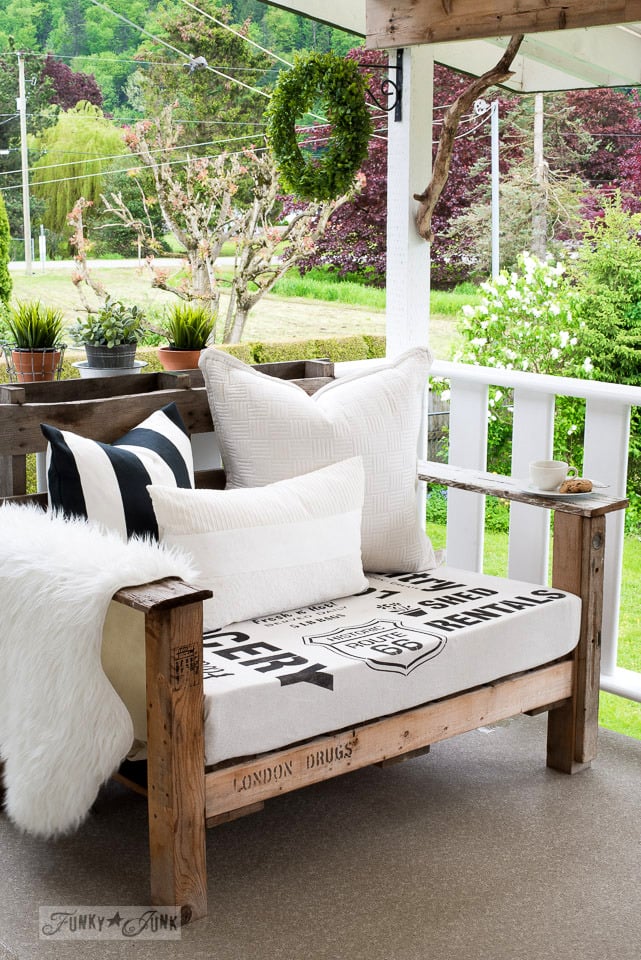 … the end result was one pretty sweet lookin’ chair! 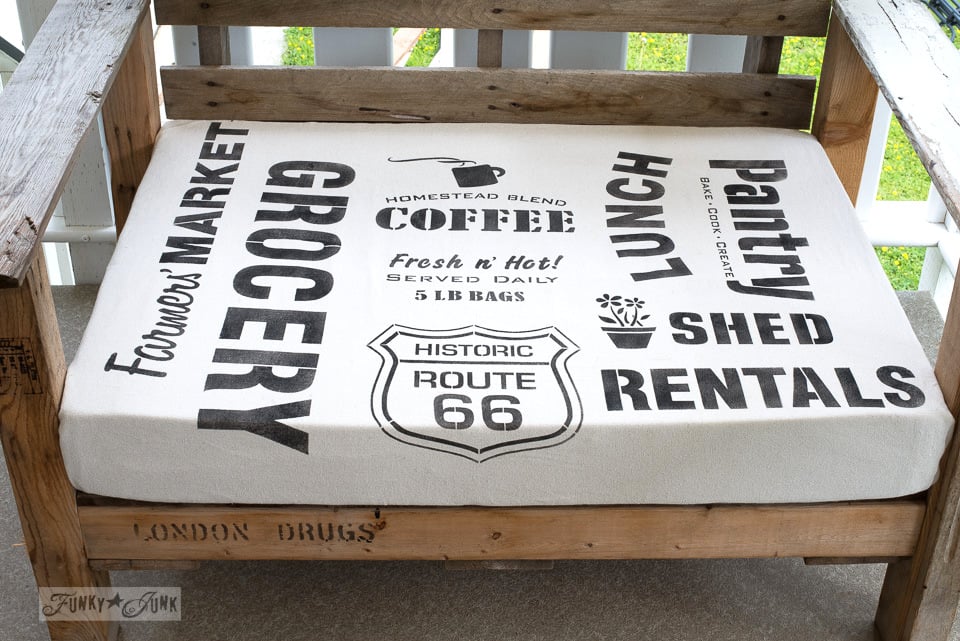 Here’s a closer look how the graphics were arranged.

In hindsight, I probably could have added more. However some rain tornado hit the patio sending everything flying, so the patio was gutted in under 30 seconds, then resumed 2 days later.

However the chairs got done, and now I can call myself a fabric designer! 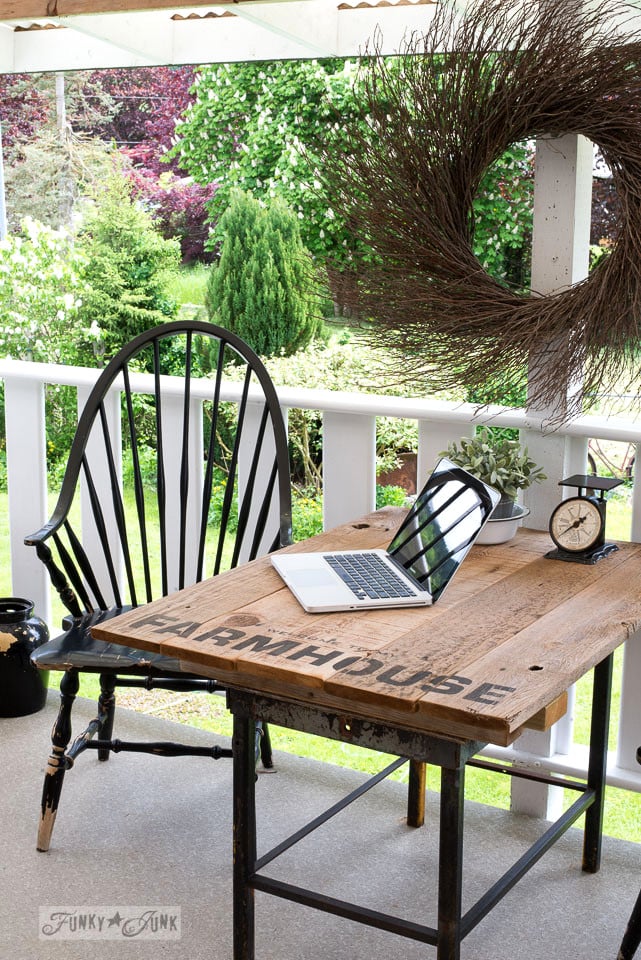 I think I’m leaving the Farmhouse patio table in place, because it does work. I just added a big wreath until I decide if I’m getting flowers up here or not.

Gotta admit, I’m rather intrigued that the wreath won’t die on me… 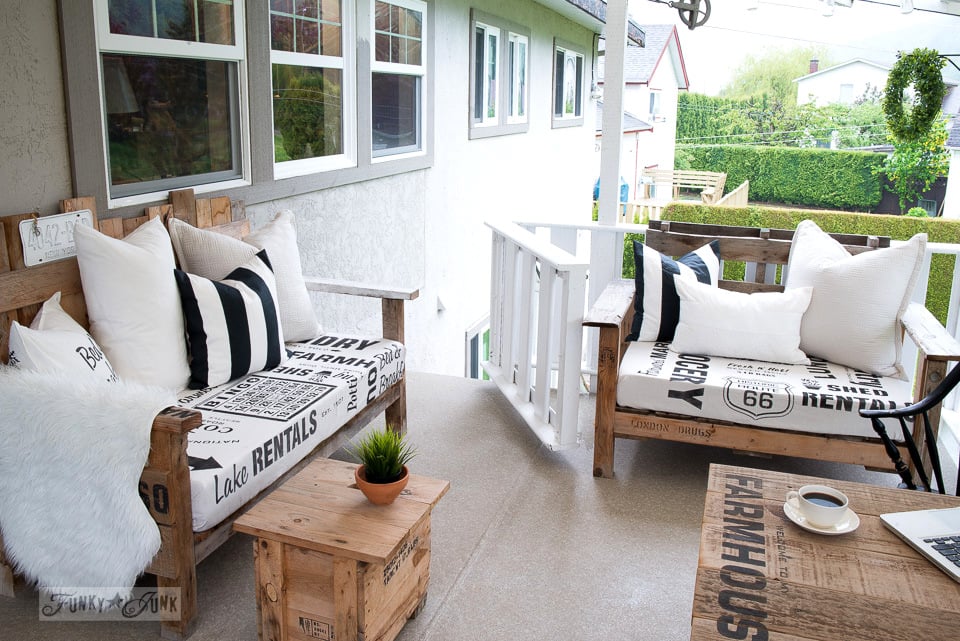 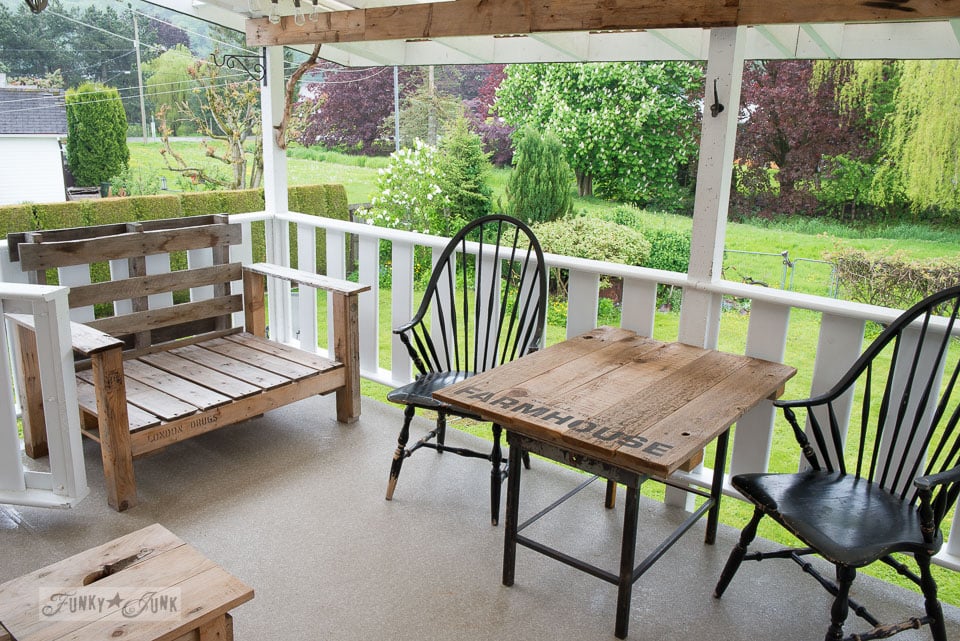 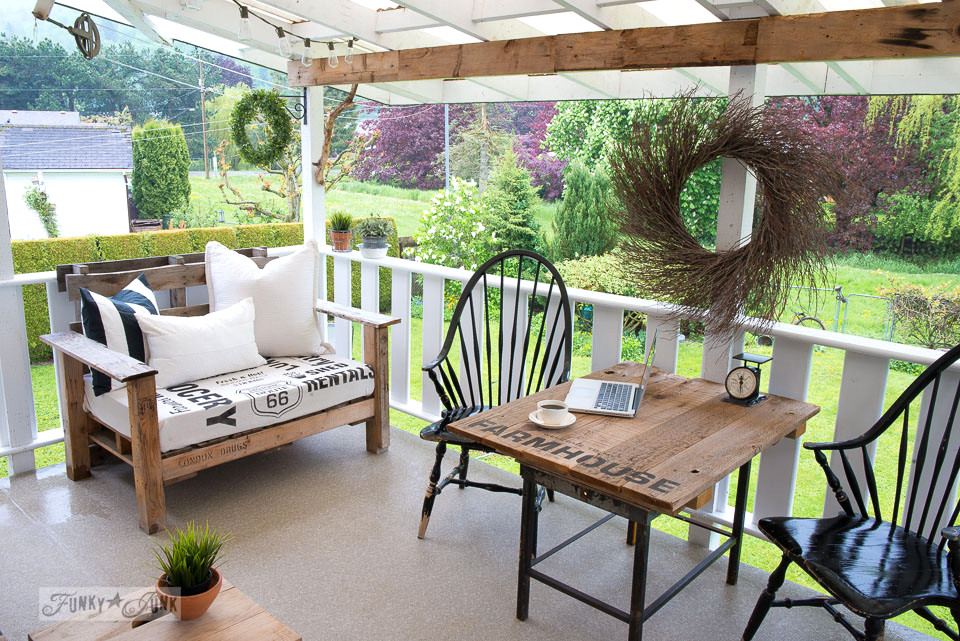 Simple and sweet and done! Let the 2017 patio games begin!

What do you think of the fabric idea? Think you may try the look out with some stencils you have?

Disclosure: I work with Fusion Mineral Paint to showcase projects using it and because I love the stuff. I was not monetarily compensated for this post. The stencils are from my own line.

35 thoughts on “Sign stenciled fabric for the pallet wood chairs” 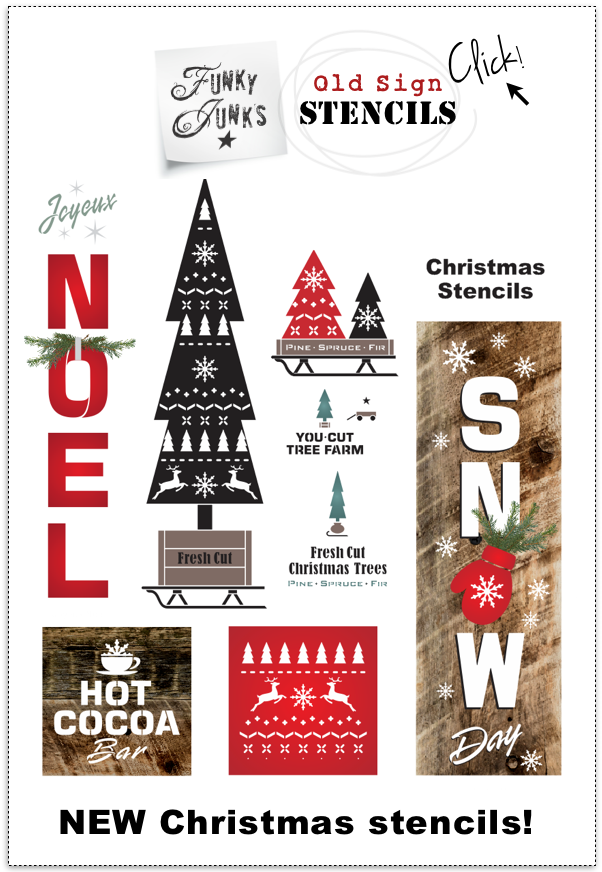