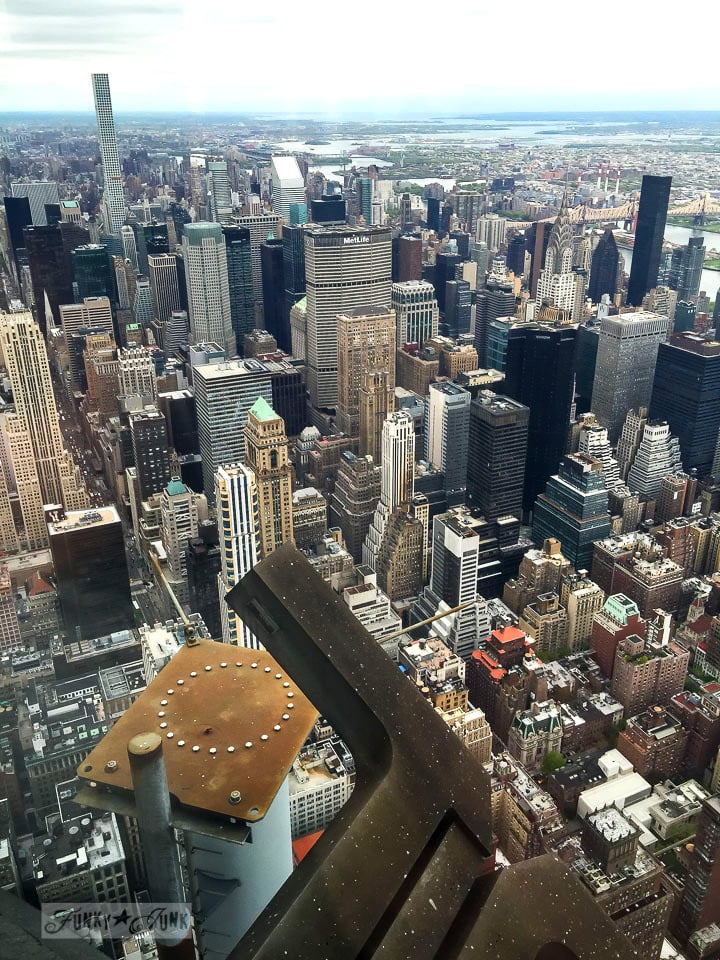 “But I admit, while I was rattled from all the new, scary stuff around us, I was SUPER antsy to get outside these buildings, and take in what I had heard about this place for so very long…”

Waking up in a city that is so vast was a little overwhelming. Especially when you don’t know your way around, and every tall building appeared to hug you so tight, you lost sight of direction.

Studying a map before we head out, we decided to take in the Empire State Building. It appeared to be walking distance so it can’t be that hard to find, right?!

Rule #1 about NYC… everyone will say stuff is walking distance, but things are actually farther than they appear on a map.

Well anyway… we attempted to rely on google map once again, but once it started spinning silly circles, I decided to ask people or look up. That seemed to do the trick! 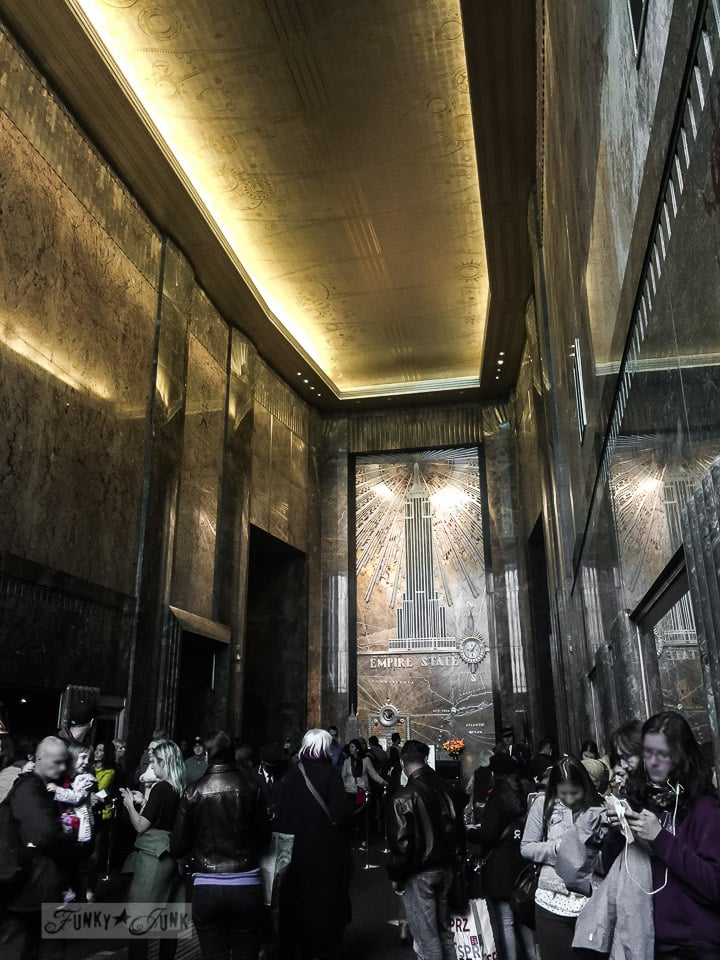 It was right about here that I had to laugh to myself.

When did I turn into my parents?!

I’ve been pretty blessed to travel lots with them as a teen, but was ALWAYS annoyed at the stuff they wanted to see. Where was the nearest beach?! But nooooo… they wanted to see boring buildings and dumb water stuff (I passed on Niagra Falls for a hotel room, can you believe that?) 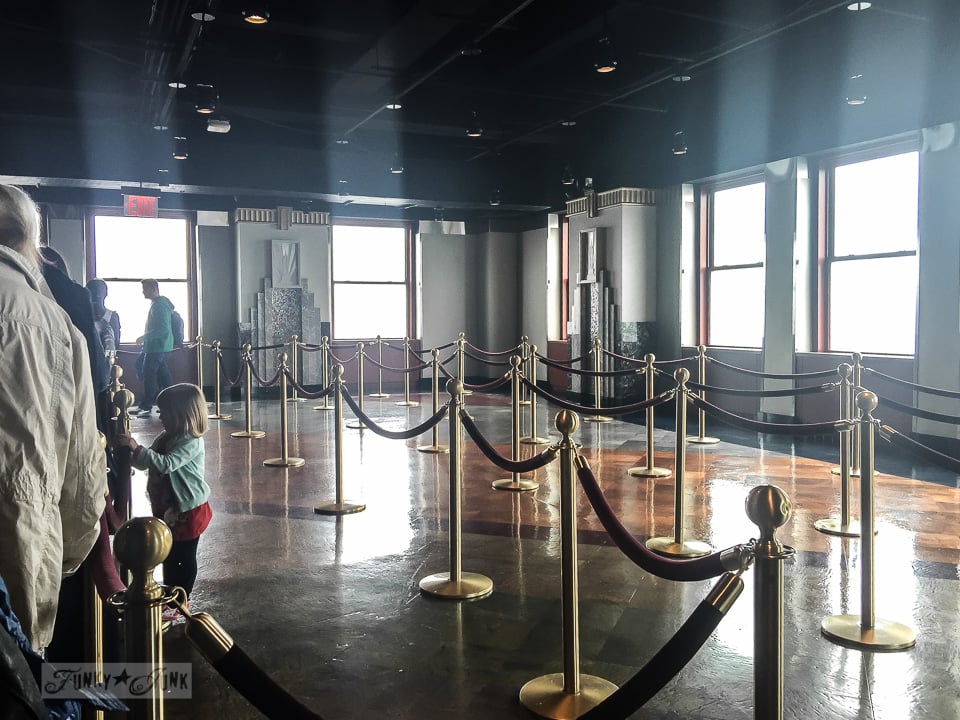 Well, I had to take in at least one good view while in this city, so I hoped my boy would get something out of the experience.

It was suggested to avoid the major sites on weekends, so I was thrilled to see the lineups so short on our Thursday.

And it was right here when I realized my fancy point and shoot camera’s card malfunctioned. Whaaaat…

So with no card, I prayed my phone could do a reasonable job. 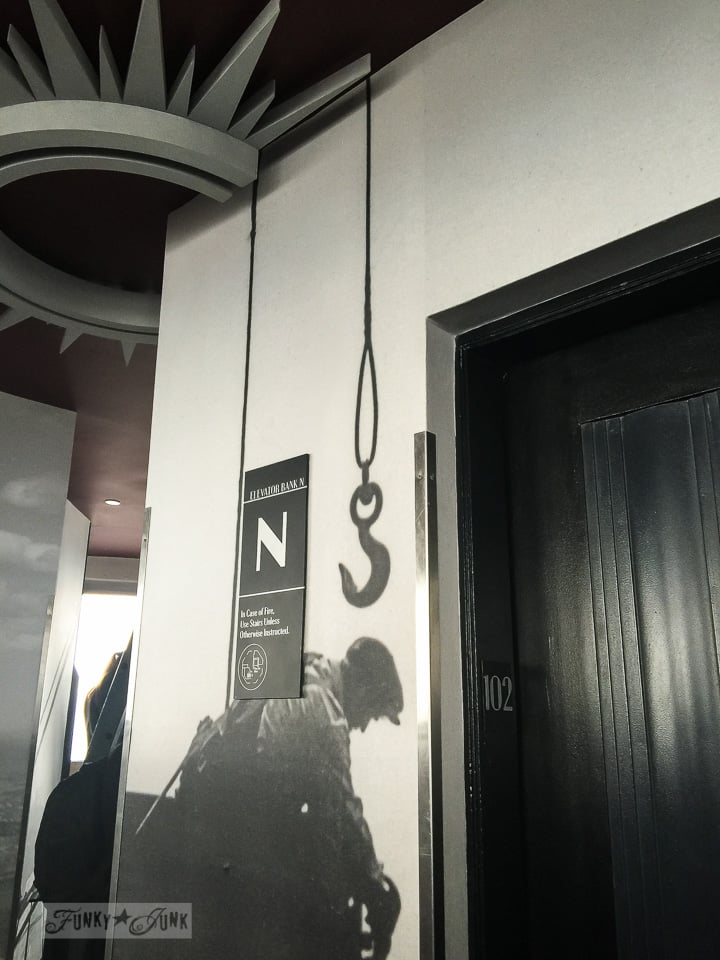 There’s two ways to view.. the first landing, and then the very top. Of course we bought the full meal deal, which ended up being around $100 for 2. Rather expensive elevator ride, but it isn’t everyday you get an airplane view of NYC from a building. 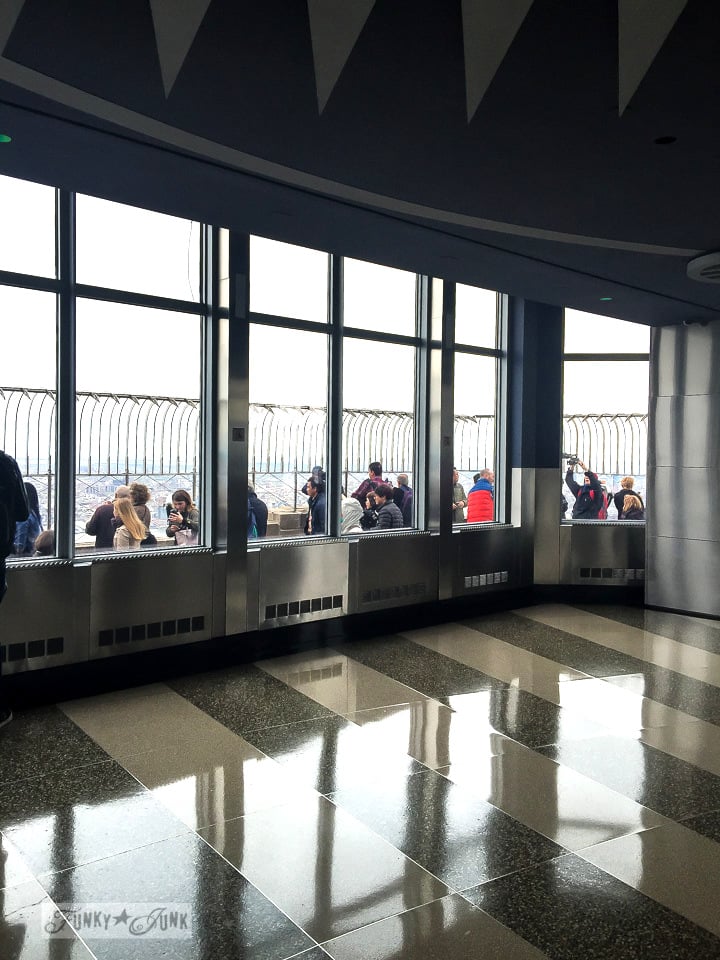 This is the first landing. You can go outside and peer through the caged walls, which was perfectly fabulous. Where Harry Met Sally.

And the view was AMAAAAAAAZING! 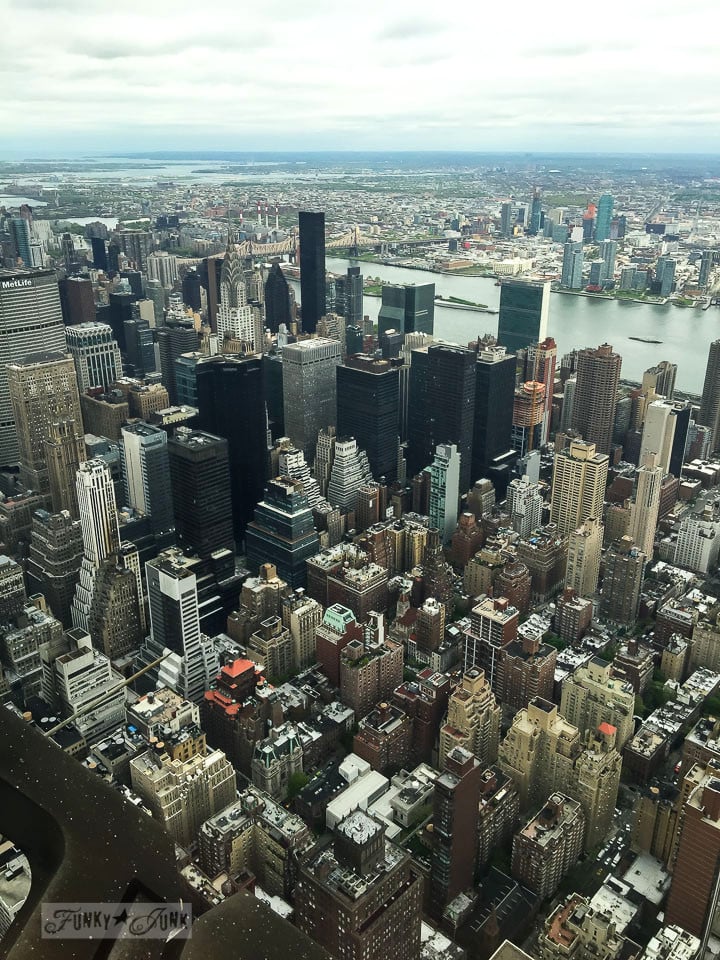 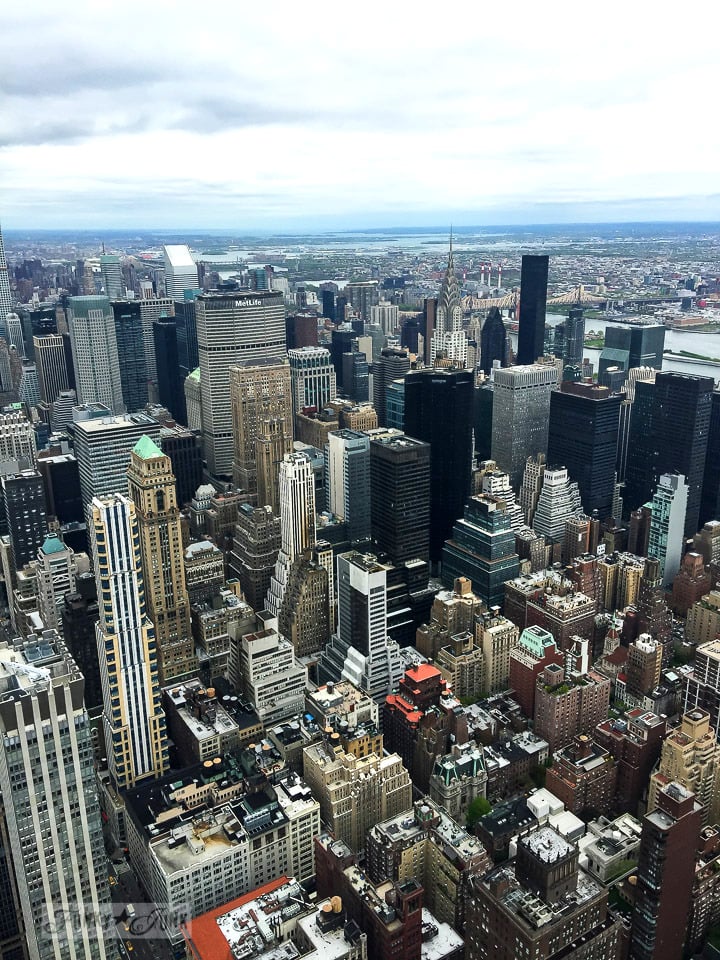 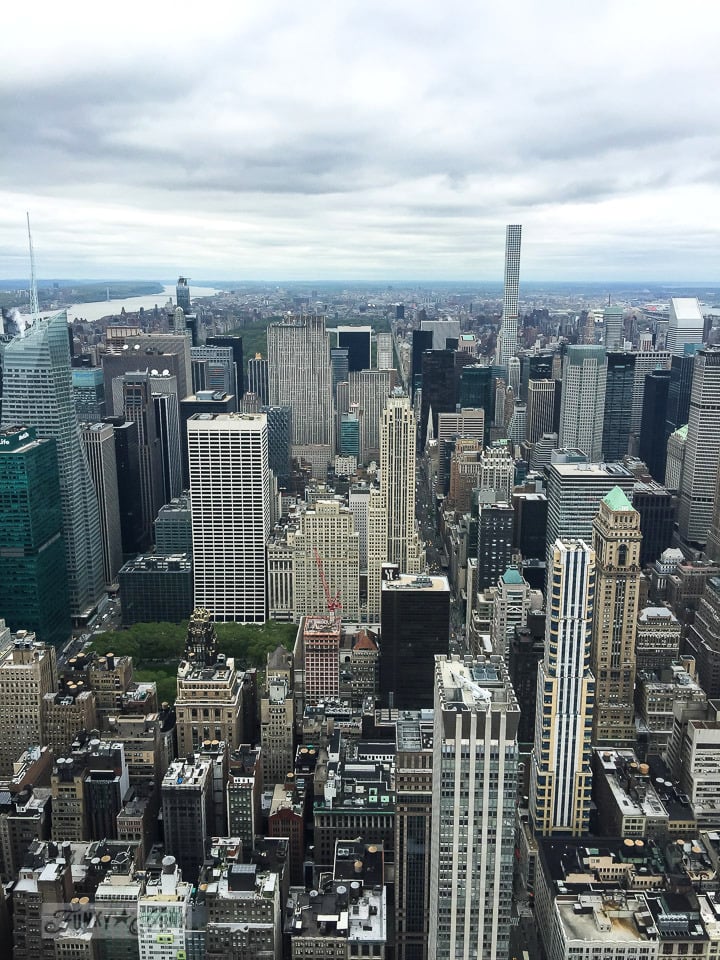 Central Park! Giddy! This was one of my biggest bucket list items ever so I was pretty thrilled with this.

Until someone mentioned, “See the building with Comcast on it? That’s The Rock, and it has a better view than this.”

As a side note, the day we tried to go, it was so fogged in that visibility was 0, so we passed. Drat. So I’m glad we got this one in. 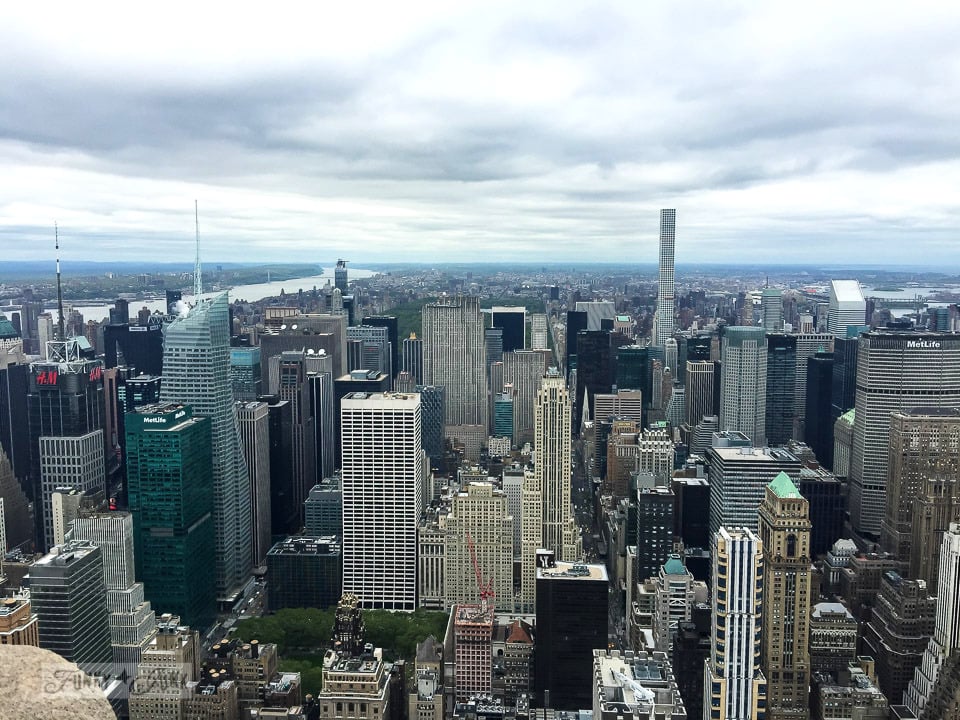 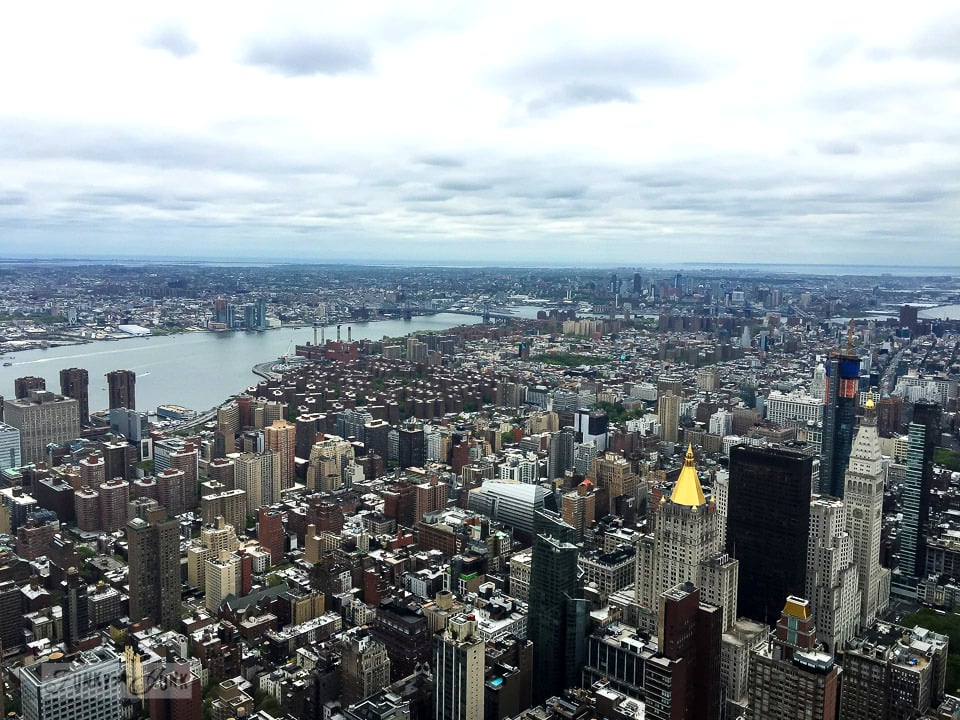 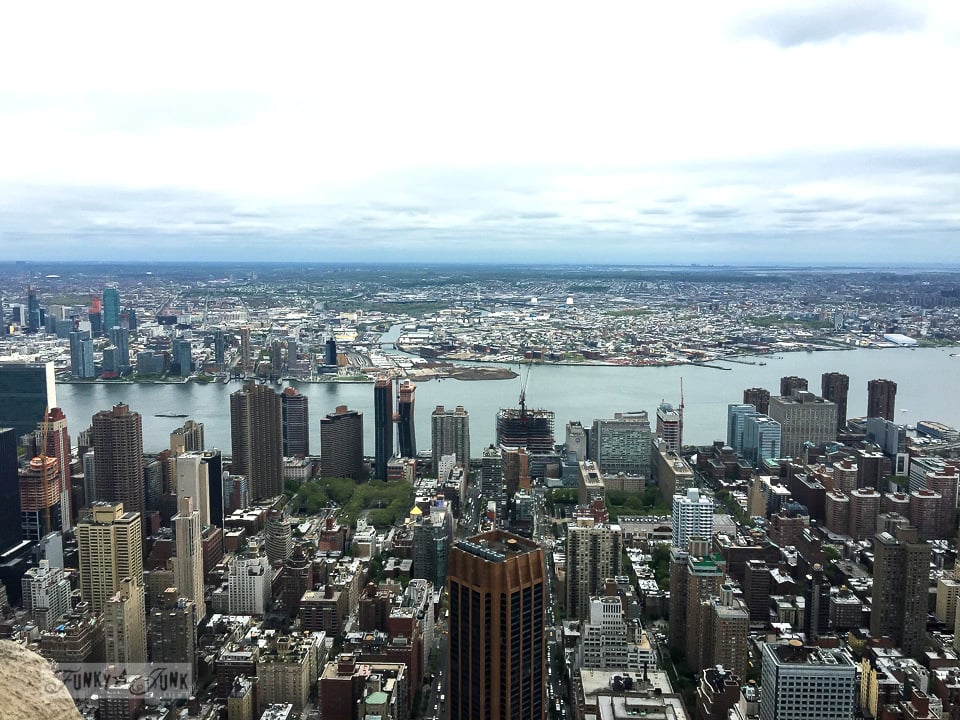 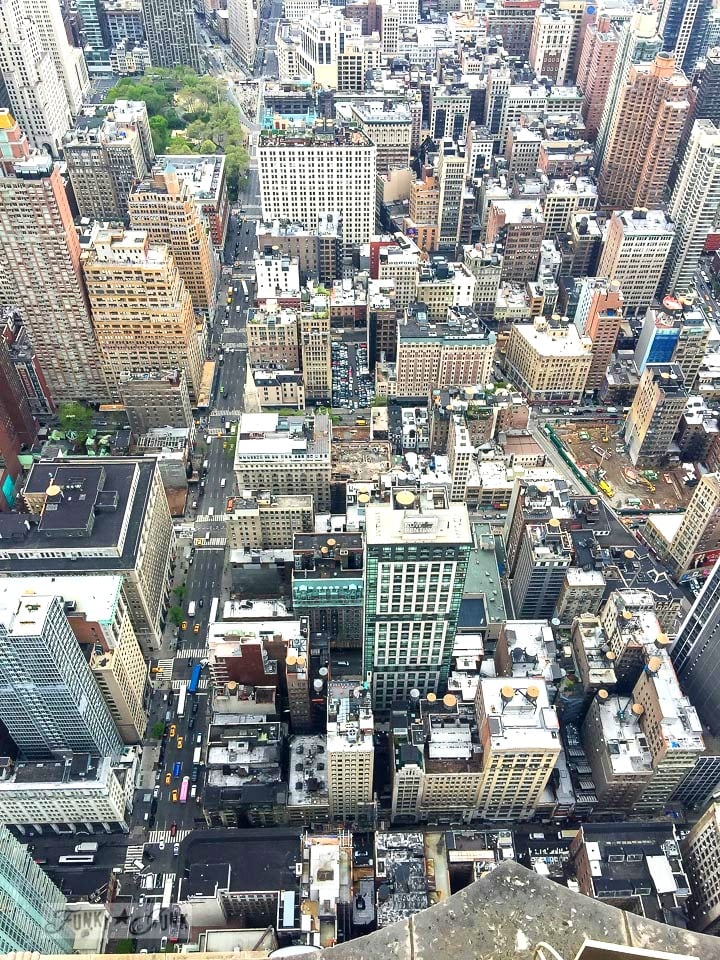 This is holding the phone over the edge. Yep… we were pretty high up for being on a building! 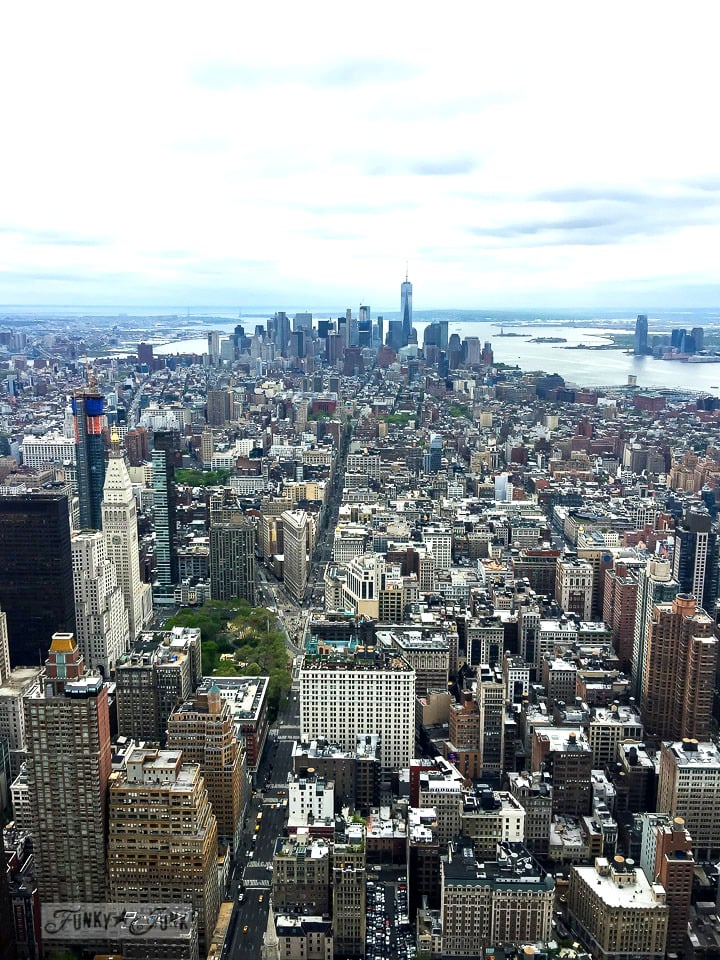 Very beautiful! The tall building in the back is the Freedom Tower where the 9-11 Memorial is. It looks close, but it isn’t!

Is going to the very top of the Empire State Building worth it?

As for the very top level, it would be my suggestion to save your money and skip it. The viewing was through glass that offered glare for every picture I took, and the glass didn’t appear to be all that clear to look through. View wise, everything just looked a tiny bit smaller, so not much different.

But if you’re anything like me, you will ignore that advice, and do it all anyway.

So, we spent a zillion dollars on some souvenirs, then hit the streets to see where we’d end up next. 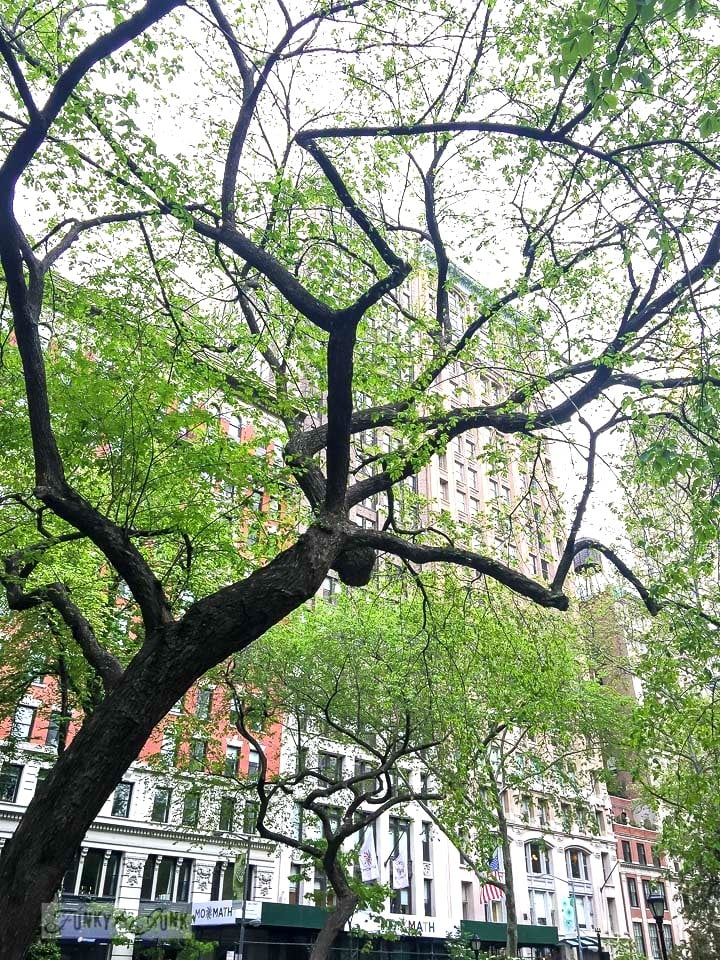 So because we used the phone so much at the building, the battery was down to about 10%. Goodness… and naturally we did NOT know our way back.

We ended up in the Flat Iron district, which was really cool! But remember… no camera, so no pics.

But the trees stole the show for me. Welcome to Madison Square Park! 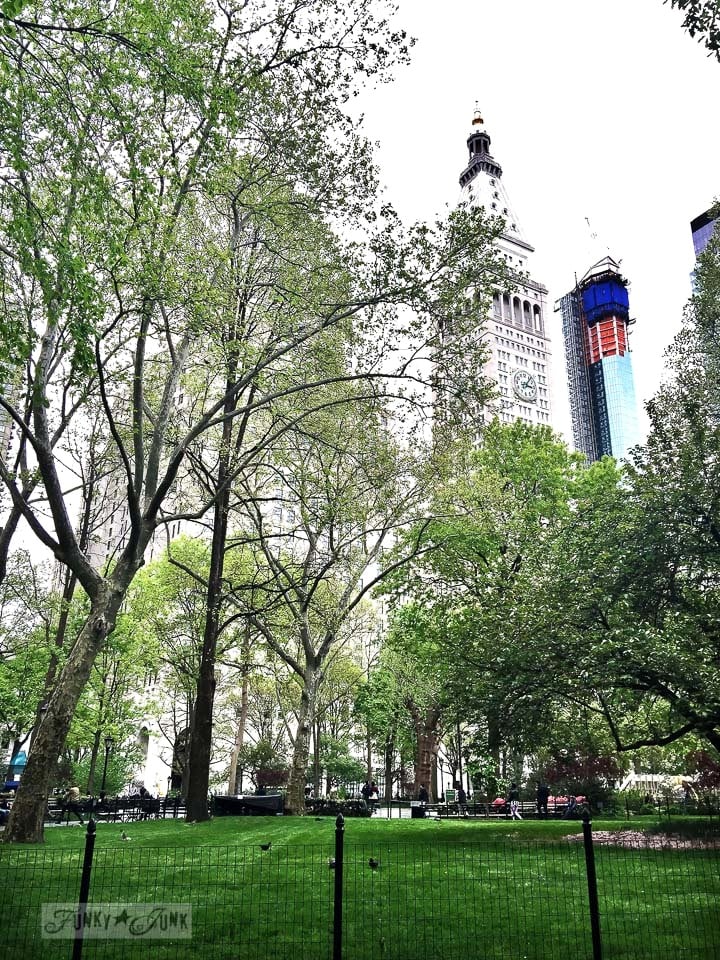 There is something magical about how green spaces speak to me, and this park did it to the nines. It was small and quaint, but the really cool thing about it was, while dense in the middle, it allowed the tall buildings to shine in the background. It couldn’t have been a more perfect setting.

So we just sat, and watched the pigeons, people, and appreciated the beauty.

My son wasn’t ready to walk back yet, so we resigned to find a new lunch place . After walking past the usual types, one stood out. 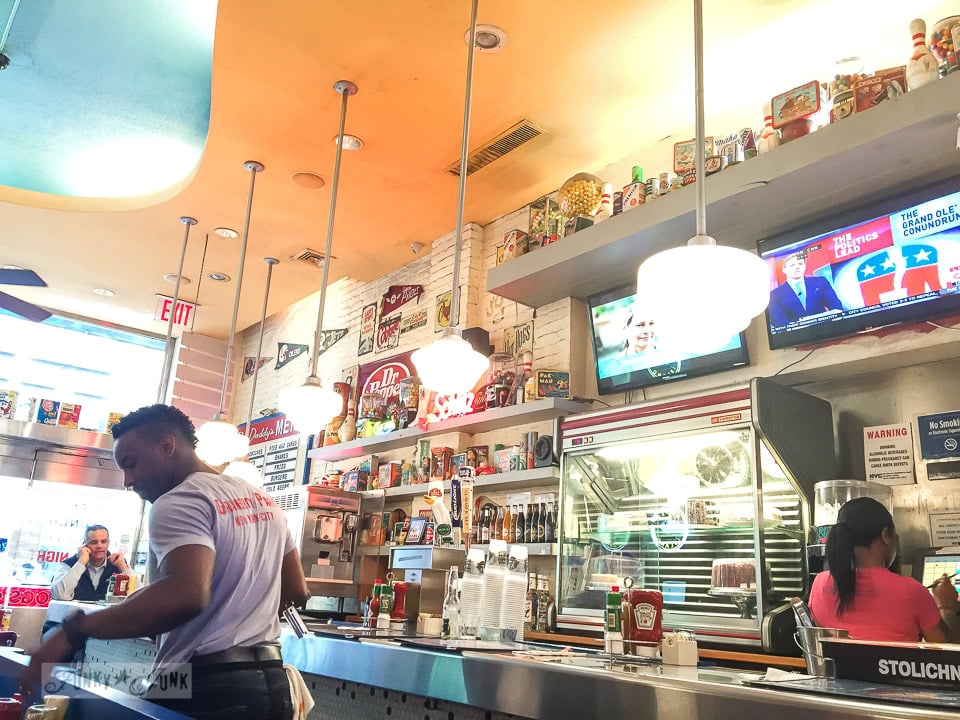 Big Daddy’s is a vintage styled diner, and at this point, I didn’t even care if the food was good or not. I loved the aesthetic of this place sooooo much!

Noting a drug store across the road, I ordered, then bolted to grab a new charging cord, plug AND SD card for the camera. What luck!

And that is how I captured this quaint place. 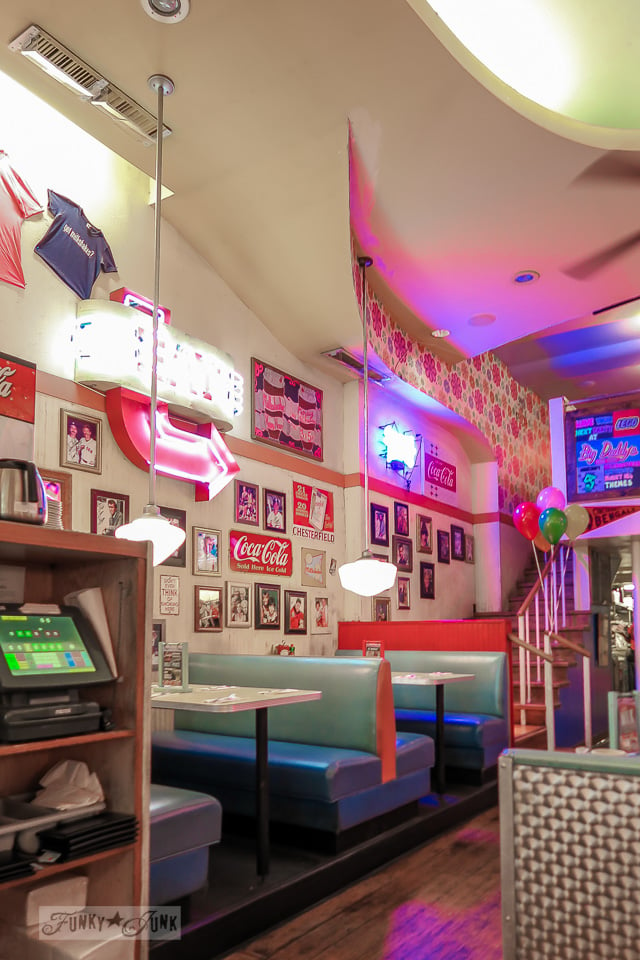 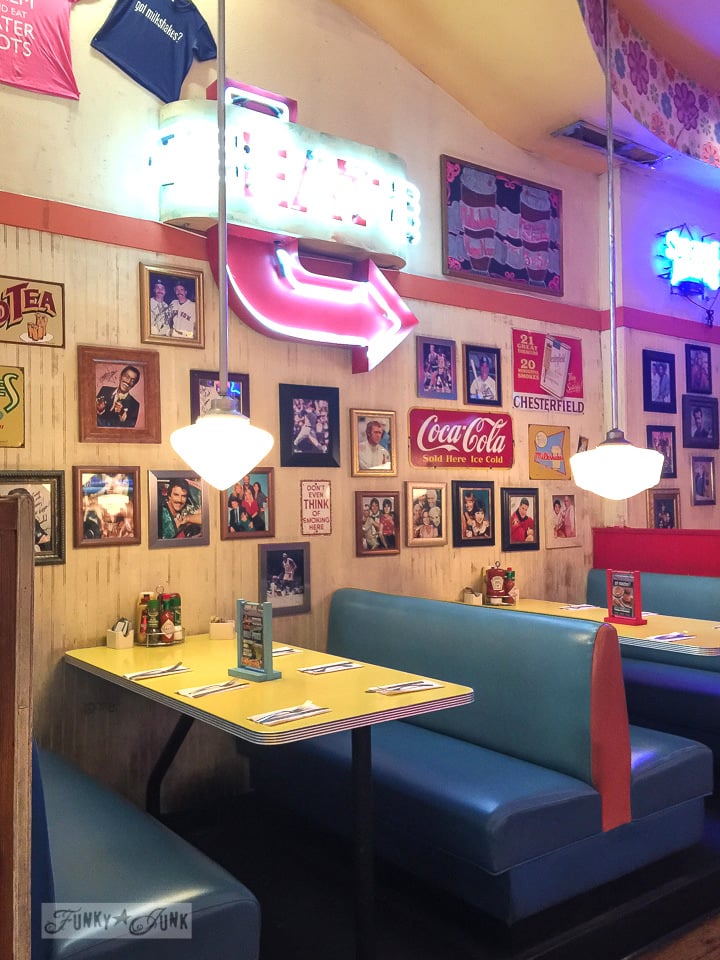 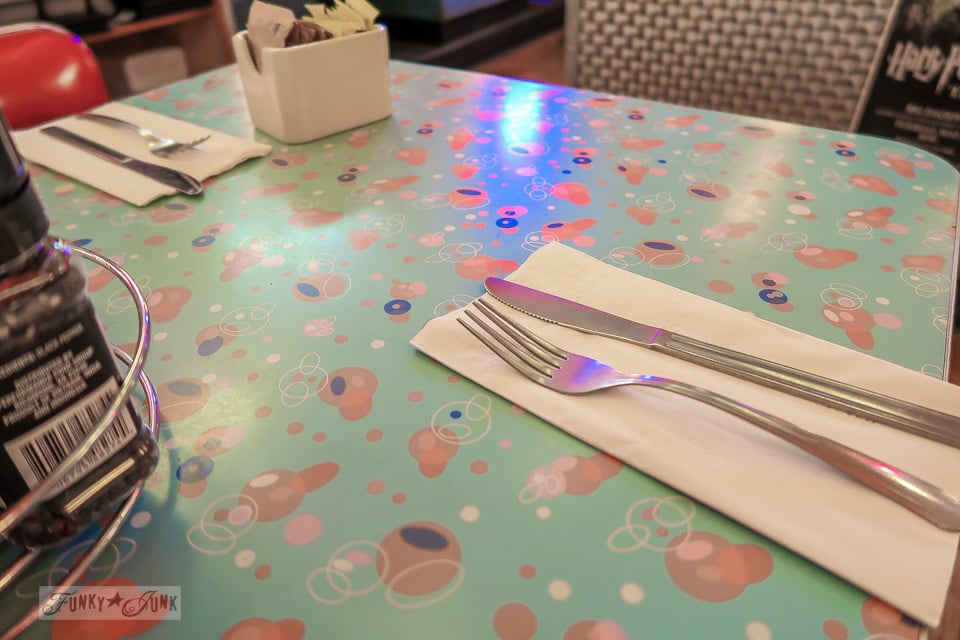 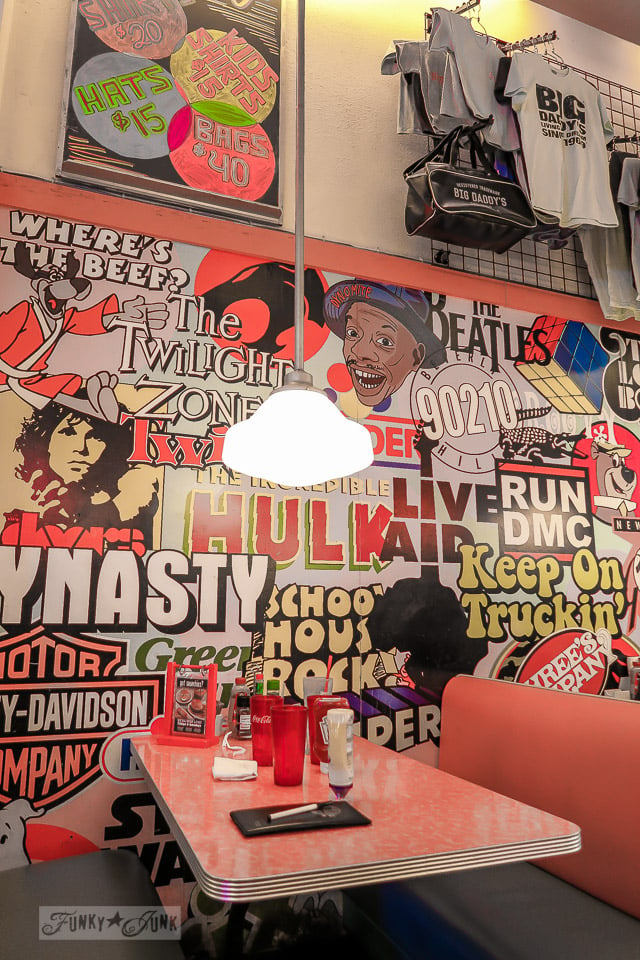 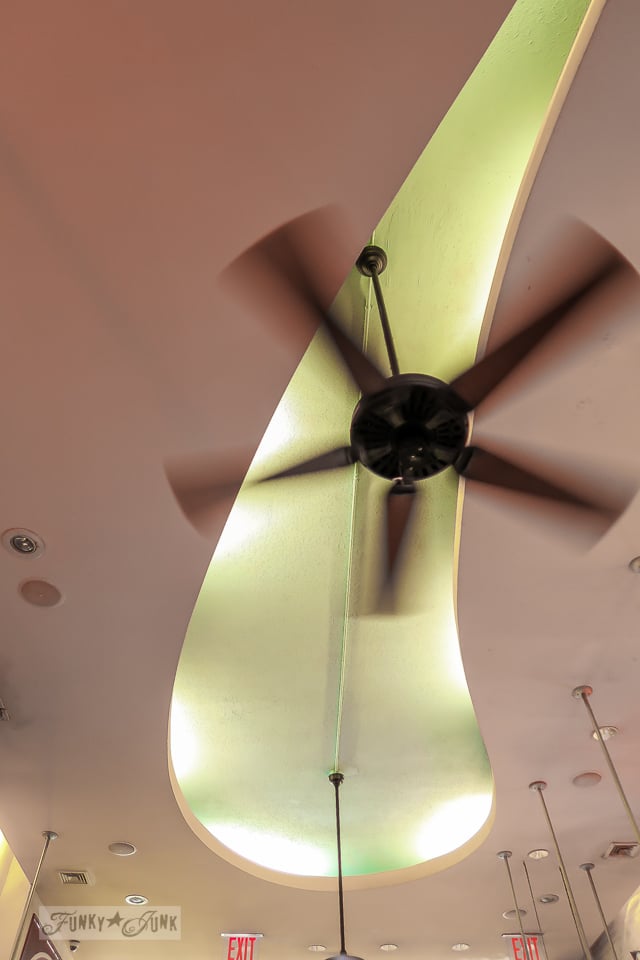 Isn’t that just the most fun you’ve ever sat in?! Very welcomed treat for hungry eyes and tired feet.

I really loved my salad, and the coffee was amazing! But my boy ordered a burger that came rare. We flat out forgot the USA served them like that. He didn’t tolerate it well, but I feel that was our fault. We didn’t forget the next time. 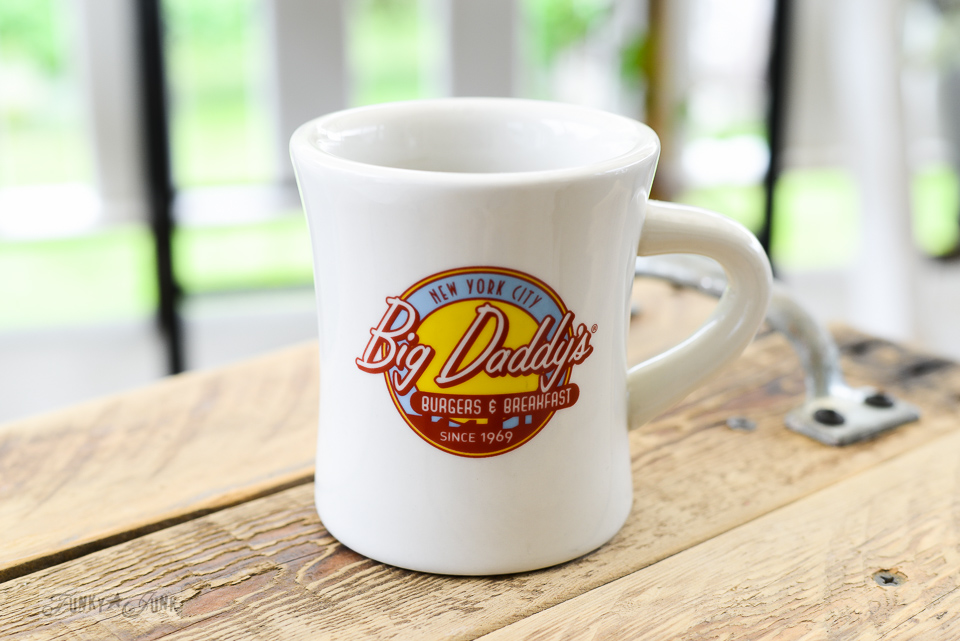 I enjoyed my coffee so much, I  HAD to get a mug from there after seeing how cute they were! It means more to me to collect from memorable places.

After eating, my son was so done with the walking thing. It may have had something to do with getting on the street and me mumbling.. “Where the blazes are we…” I need to keep my thoughts to myself more it seems!

So we tried UBER for the first time! Scary… but ohmygoodness… I’m telling you, within 2 very short minutes, this gorgeous black sedan pulls up. Wow!

Until we were dropped off. They don’t even ask you for payment because it’s all automatic, which is cool! But I was curious about how much our ride was.

$20 for just down the road… literally. Ouch. After research, I learned we ordered the luxury sedan. I didn’t even know there were options! Another lesson learned.

Settled into our rooms, it was too early for me. So I struck out for a walk on my own (lookit me all NYC like!) after drawing my OWN map, to try and find Macy’s. I’d heard all about these vintage wooden escalators from Susan at Homeroad, and I HAD to see that for myself.

My directions rocked, because I found it instantly! Right then I knew I needed to just hand draw maps and be done with the getting lost thing. Or (gulp) learn to use the subway…

Goodness, this place was massive. It took an entire NYC block! Not exaggerating. It was really that big. 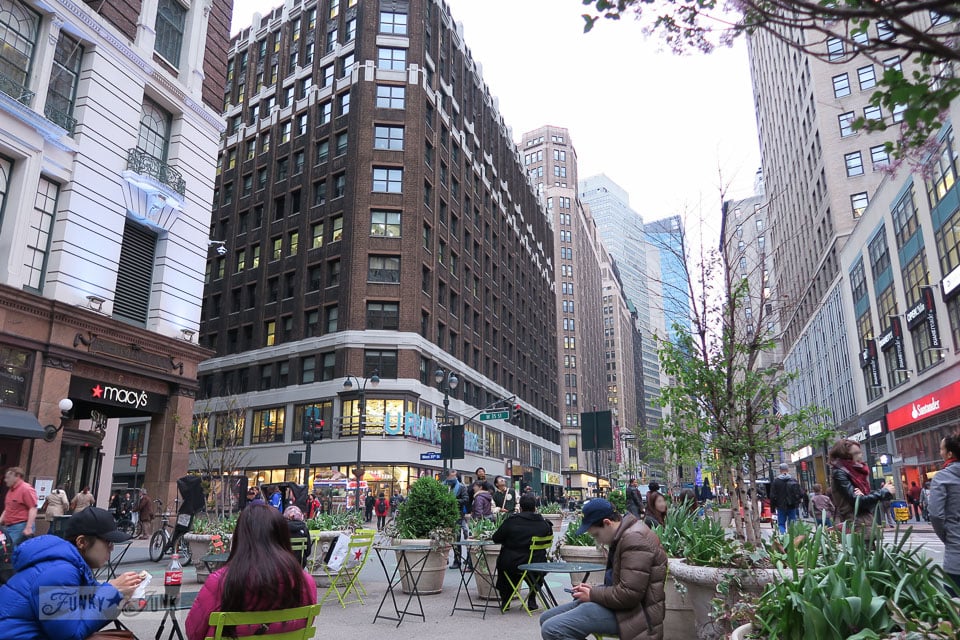 I just adored how they blocked off this large area of the street for tables and chairs. It was the perfect place to people watch. But… off to go find that escalator! 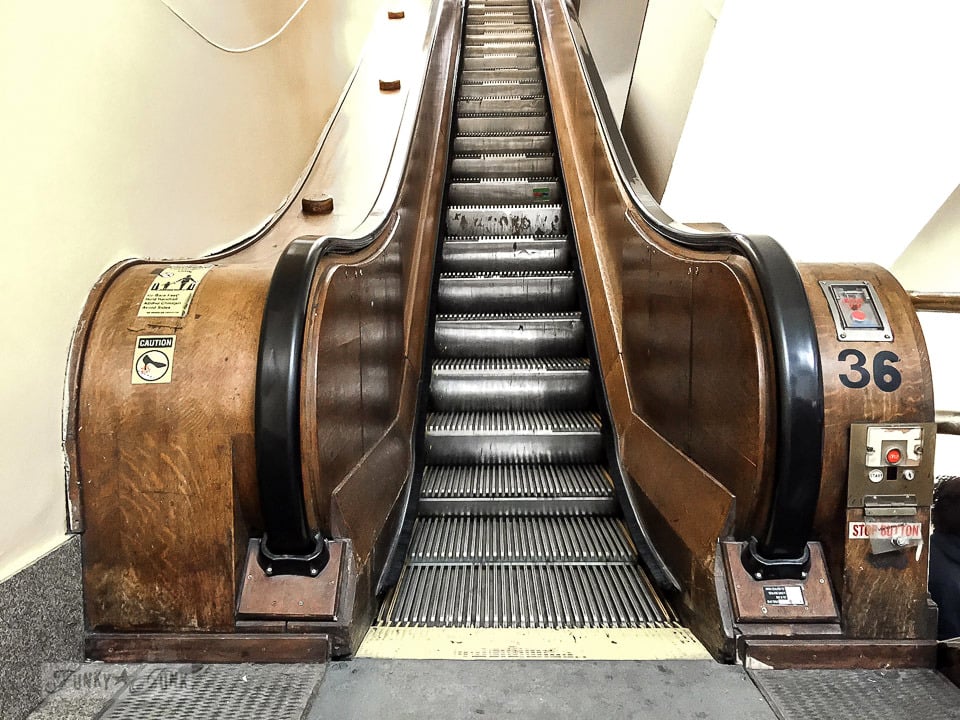 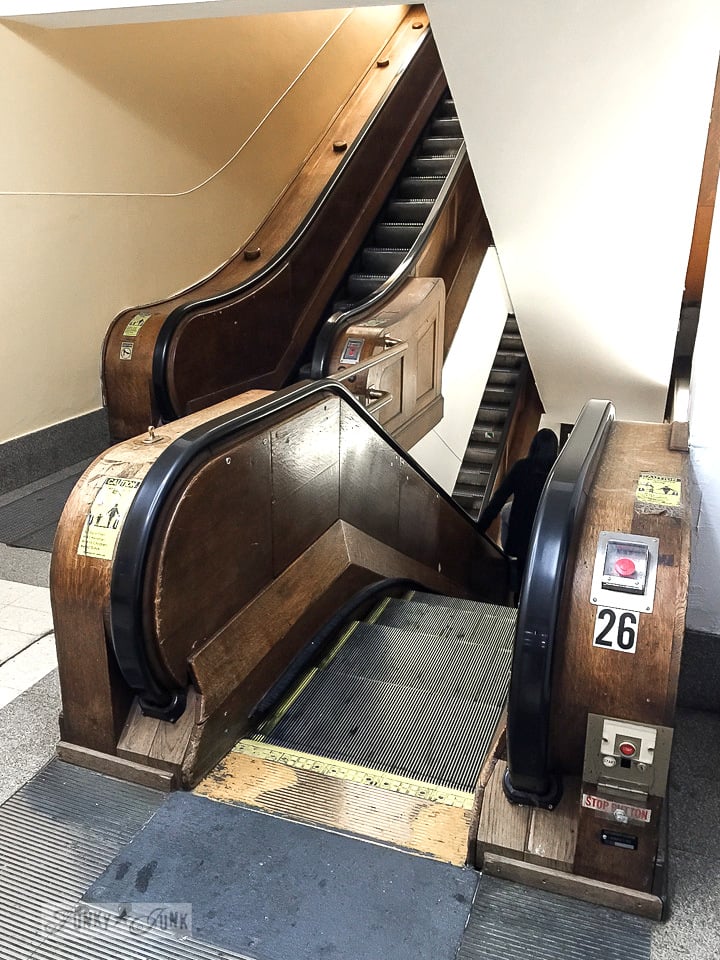 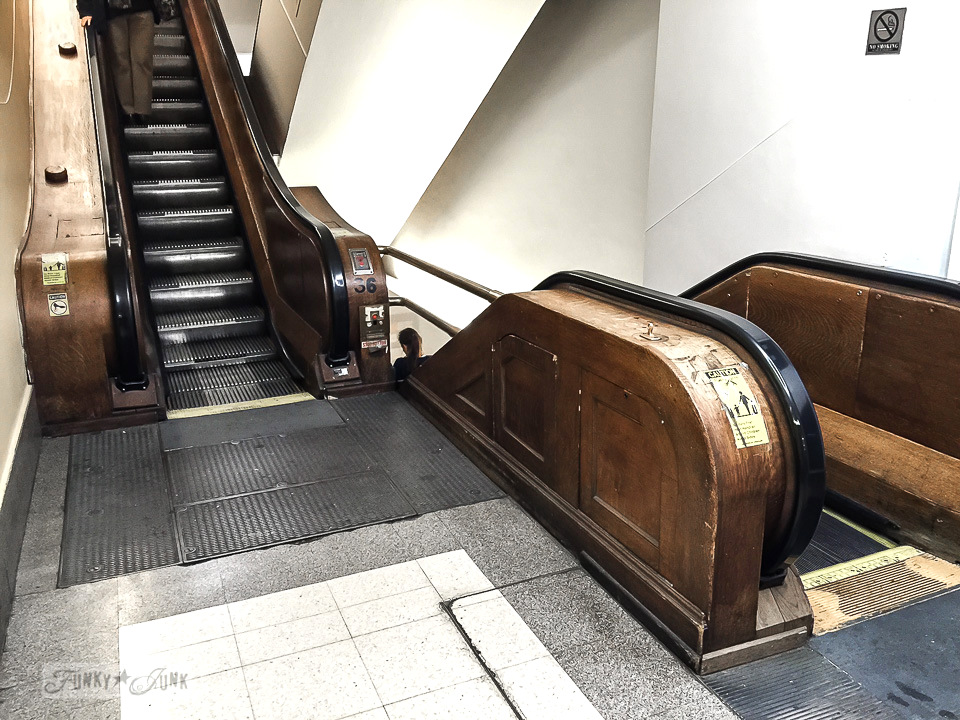 I was not disappointed! These were cool! I rode 2 flights but there were more. And by the looks of an online search, I should have further investigated, because it looks like some steps are still wooden nearing the top floors.

As for Macy’s, I suppose if you’re going for retail shopping, this is the place. It was like many brand name stores setting up store in one main. But I saw what I came to see, so I head back right after the escalator adventure.

Upon returning to the room, my boy was fast asleep, so I escaped one more time (I was kinda getting into the city vibe!) to a grocery store nearby to pick up a few things for an in-room dinner, and call it a night.

The next day promised to be a big day… we were changing hotels, and by golly, I HAD to brave the scary subway so we could make it to Times Square… HAD TO!

And that adventure is next…

Here’s a short video with a tour of NYC in 4 minutes!