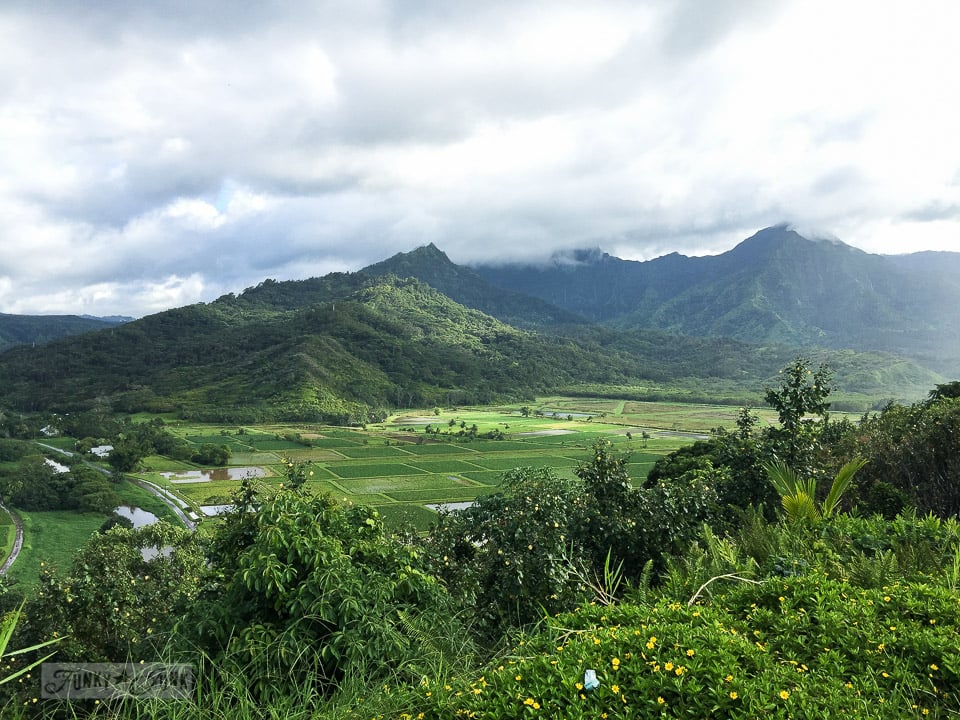 Oh goodness you guys… I have started so many good ‘fires’ at home, but with no middle nor ends, blog posts just can’t really happen yet. From purging to painting to tree pruning to house washing to dump runs to selling stuff to gutting my son’s room for a new makeover, there is lots of good stuff to come.

It’s like I got this massive burst of, “I cannot believe this place looks like this and I’m over the mess!” It’s mayhem in the best of ways. And I’m sprinting full speed ahead. Faster than picture taking apparently!

So until fuller stories can emerge, I felt it would be a good time to continue my storytelling on our summer Hawaiian getaway, and offer up my first impressions of Kauai.

We have been to Maui MANY times, and even a couple to Oahu. But this was our first trek to Kauai, and boy do I have a few things to tell you!

Please bear in mind, these are what I consider ‘crappy phone shots’, as I lost all my good shots inside my also lost Cannon camera during the trip home. Sigh…

But they are good enough to help tell the story. Here we go! 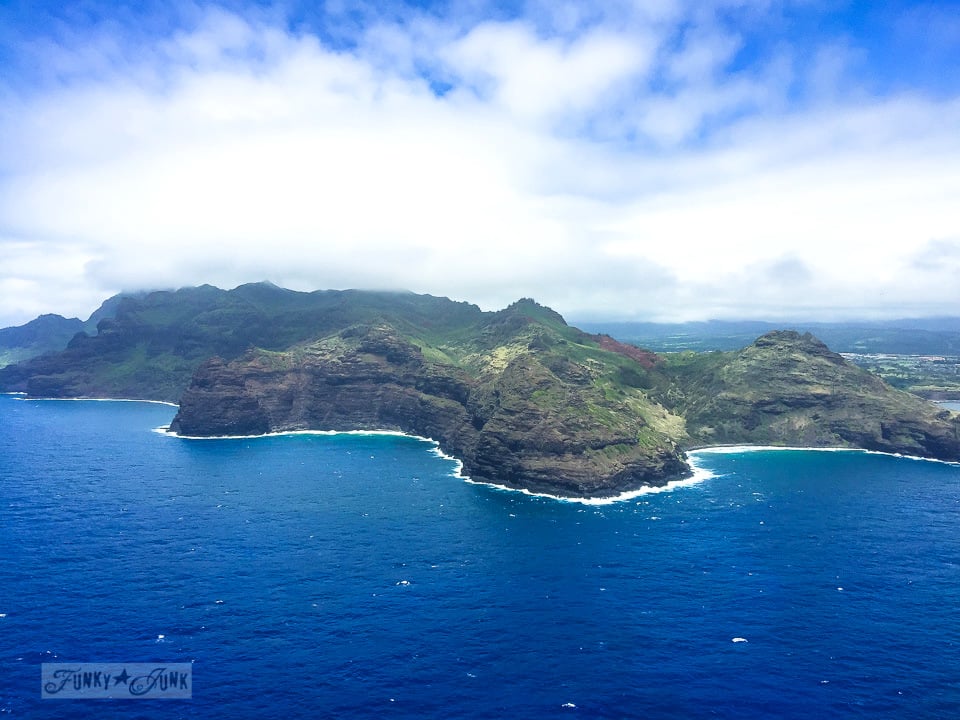 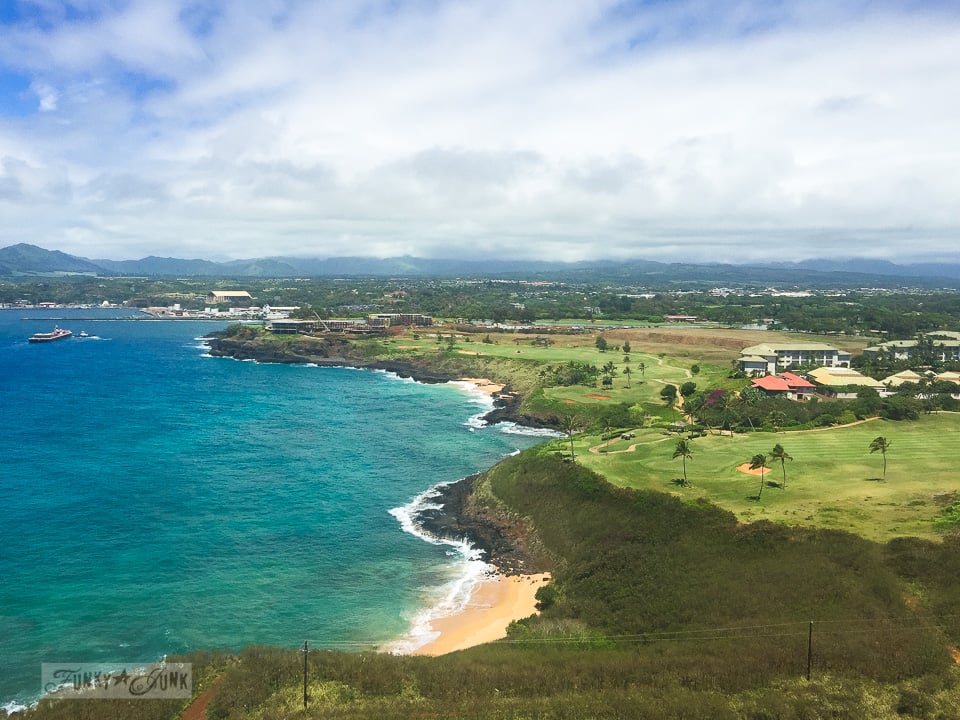 Here’s what it looked like as we approached Kauai from the air. I could barely contain my excitement! Look at all that GREEN.

All last summer I was itchin’ to get over here. Talk was, the Maui locals fly to Kauai’s north shore for their summer vacations, and to definitely stay there. But… you must love rain.

I’m from the wet coast, so I was good with that.

One lane bridge in between Princeville and Hanalei

There is a reason they call Kauai the Garden Island. Most drives to and from airports on Maui are your ‘basic sugarcane fields’ and industrial buildings. It’s neat, but it doesn’t send you bolting for the camera in a hurry.

But this island throws that mind set to the curb, and showcases its finest even before you reach a destination. 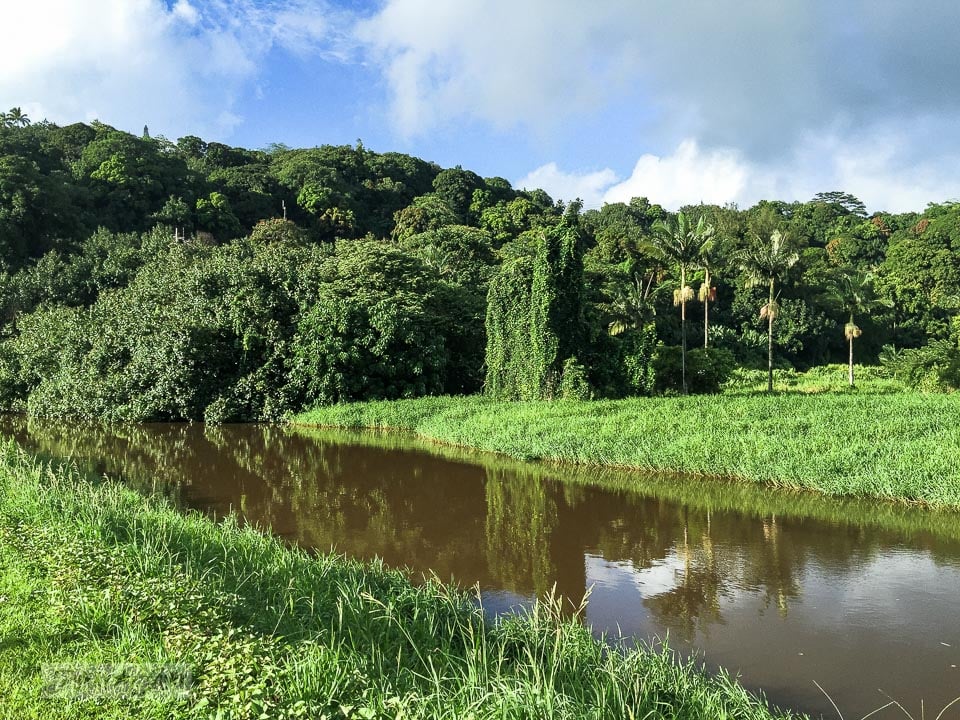 The valley below the Hanalei Valley Lookout – do drive this!

On the way to the north shore, the scenery was so outstanding, it was so hard to keep your eyes on the road.

At one point I just spat out to my son, “WHAT IS THIS PLACE?!”

And that’s a wrap! We are heading home to cooler temps, our own beds, and best of all… kitties! 🙂 . Our last day happened to be stormy, which made it easier to let go. 🙂 . But I did manage to run out during one stalled downpour to capture one of the prettiest parks I’ve ever seen, located in Princeville. . There were meandering paths all over it! Who wouldn’t want to walk along this gorgeous tree lined lane? . Thanks for following our #funkyjunkinhawaii2016 adventures! I’ll give a heads up when new blog posts eventually go up… after I hug my kitties a good long time… . Mahalo!

A photo posted by Donna via Funky Junk Interiors (@funkyjunkinteriors) on Aug 8, 2016 at 12:56am PDT

I will never EVER forget how the surroundings made me feel. Imagine being a tiny ant in a giant jungle. Like that. The mountains are tall and close to the roads. The trees TOWER over you, and in many cases, trees on both sides of the roads create an arch, because they are touching. It’s as if the vegetation is on steroids. 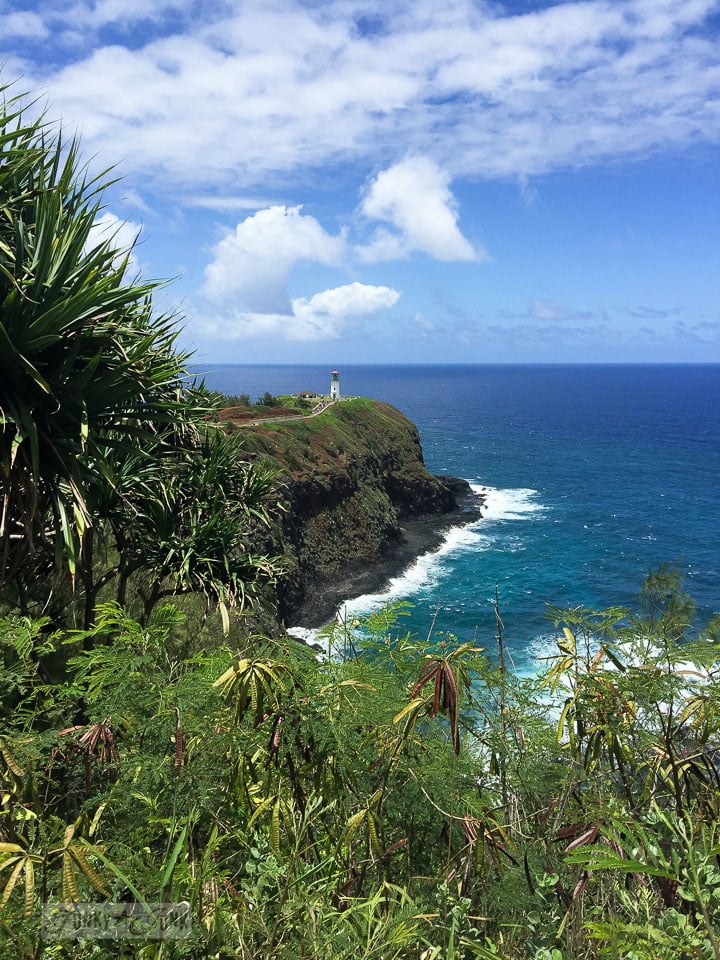 Chaotic Perfection is the perfect name for this place. It’s rambling, and even a little wild. But in the most beautiful ways imaginable.

But then a little bit of tough reality quickly set in. As we eased through the towns along the 2 lane highway towards the north shore, traffic came to a stand still at each town. It was ugly. And I quickly assumed there must be some kind of construction going on.

But I was wrong. This was everyday traffic. Rush hour at 1:30 pm?! Yep. All day. Every day. Unless you leave before sunrise, as we learned later. Crazy talk.

The airport town is Lihue. And then there’s Kapaa. Both those towns have alternative routes, but we didn’t know about them at that point. So… if you go, look them up! 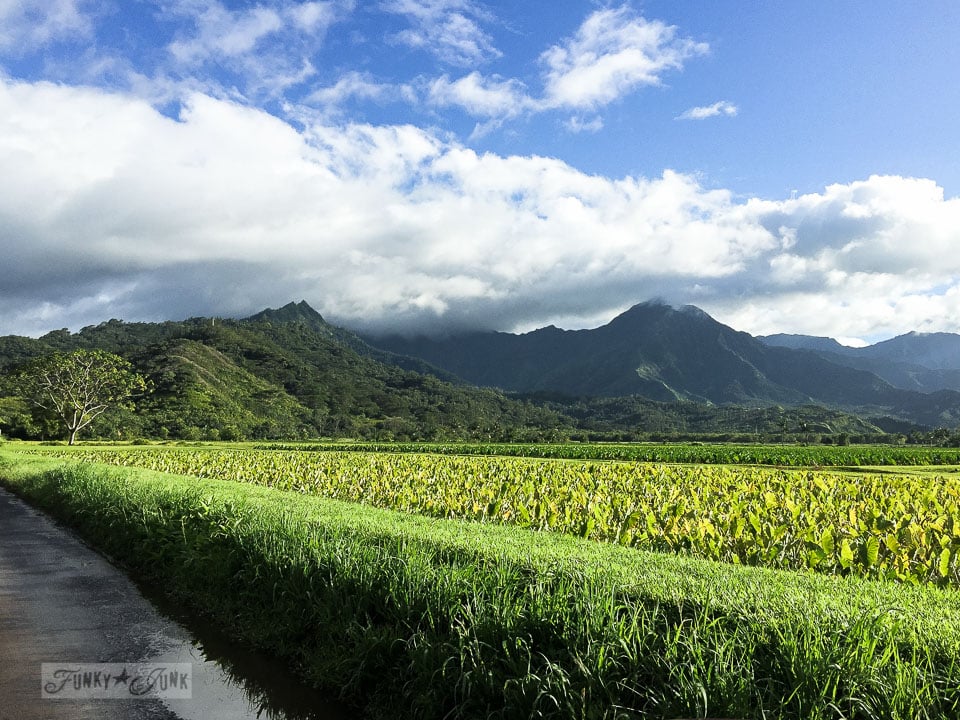 The valley below the Hanalei Valley Lookout

But of course, in between the towns, (once you FINALLY got through them that is…) the highway was basically yours. And you got to see stuff like this. And this wasn’t even anywhere yet! 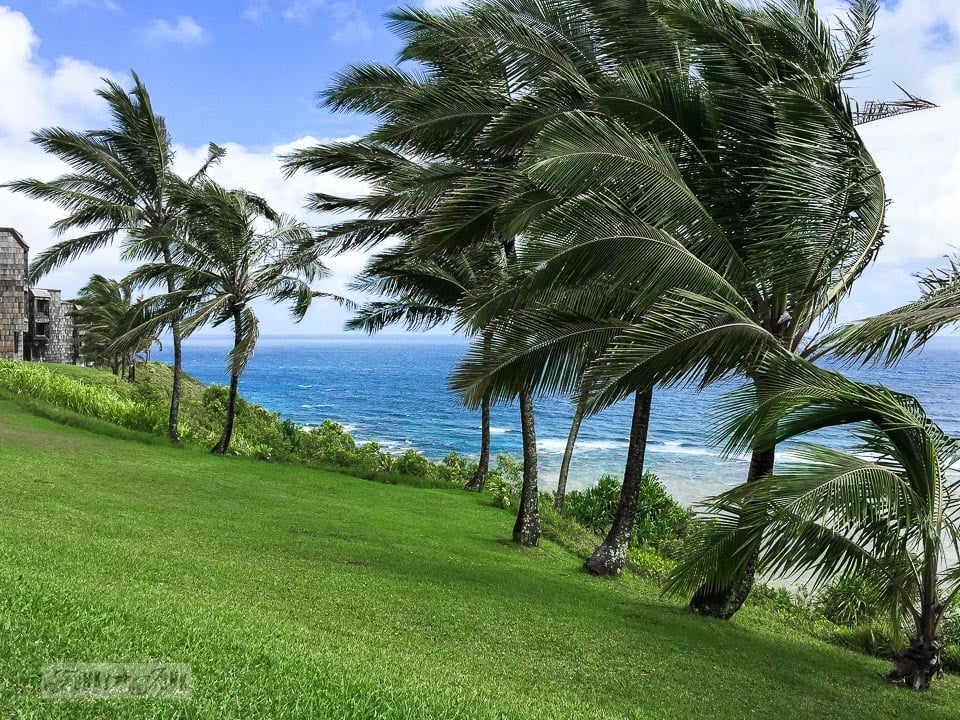 But first things first, we settled into our condo.

We stayed in the area called Princeville. It’s a community of condos and residential living, situated around a golf course setting. So… perfection.

Our condo was called the Sealodge. (we booked through VRBO) We chose there due to a friend’s recommendation. It was pretty cool. 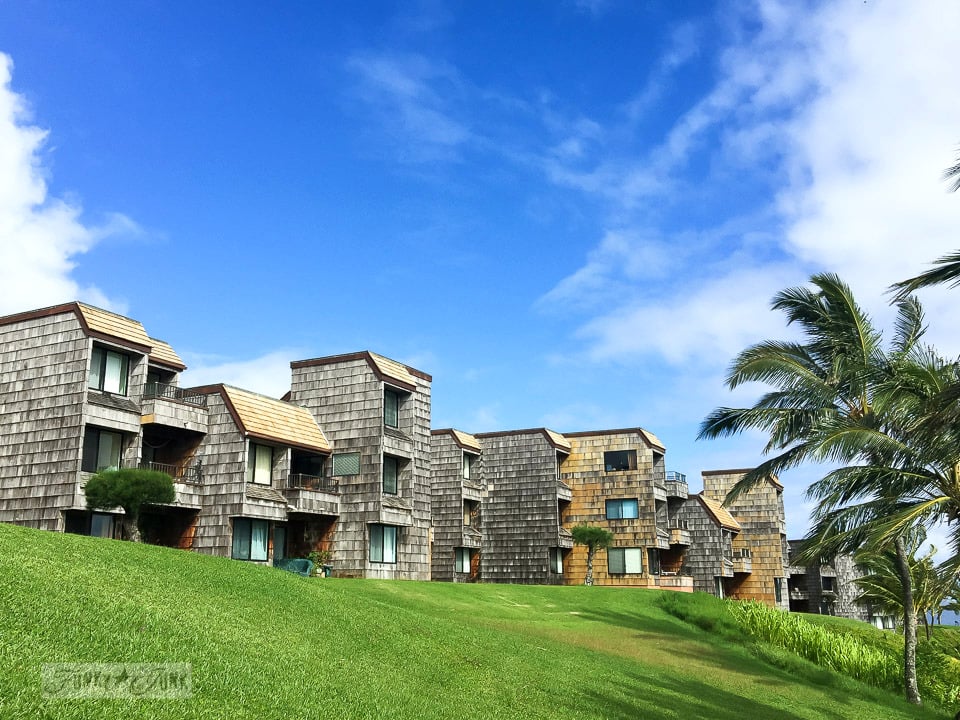 Sealodge reminded me of all these deserted beach houses along massive rolling hills. It was so quiet, which felt odd, yet fascinating. It’s about the most affordable place on the north shore. The condos are amazing. Ours even had an upstairs, so my son could enjoy his own space and TV!

I wish I could show you the complete shoot I took of our place. But… someone else is enjoying them.

One of the reasons for the affordability is, while it’s ocean front, it is not beach front. It has its own small secluded beach, but the trail to it was very steep, and since it rained every day, it was too treacherous to attempt.

But some pretty outstanding beaches were only quick 10 minute drives. I’ll show you a few soon. 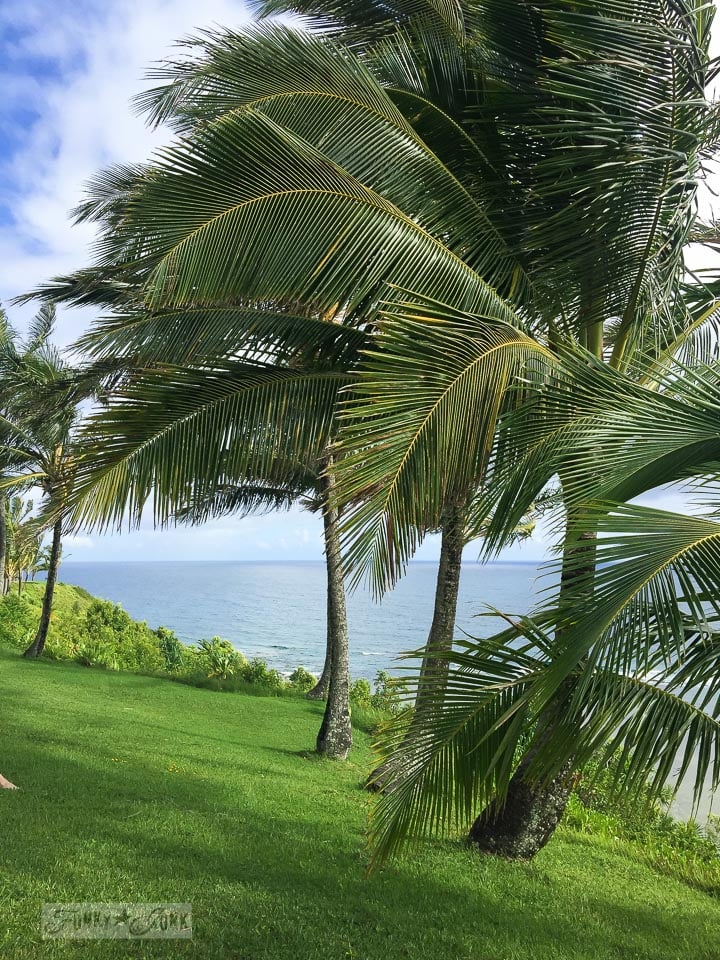 The rolling hills on the grounds were so steep, you actually felt a little off, like you’d roll right into the ocean.

It was neat, in a cartoon kinda way. 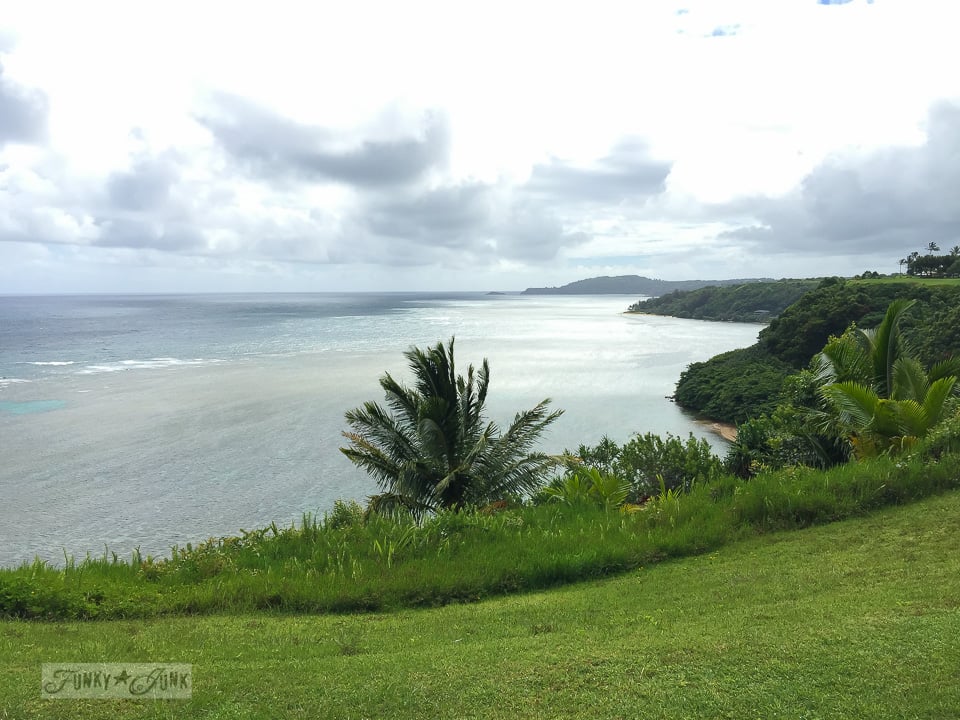 But what a view.

This place even had its own rain forest. I kid you not. On the other side of the condos was a full out jungle beside the grills.

I will never understand this island. 🙂

So once we finally found the place, and figured out the ‘unique push button door locks’, (you need a good memory to get in, I’ll tell you that), I had to go for a drive to see where in blazes we landed.

First stop was the Princeville super market. Because our time was so limited to 8 days on this island, I wanted to book in a helicopter tour, Na Pali Coast snorkle sail, and check out the inner tube ride through the Plantation.

Which apparently sells out a year in advance… and they just opened!

But helicopter and snorkel was ON. 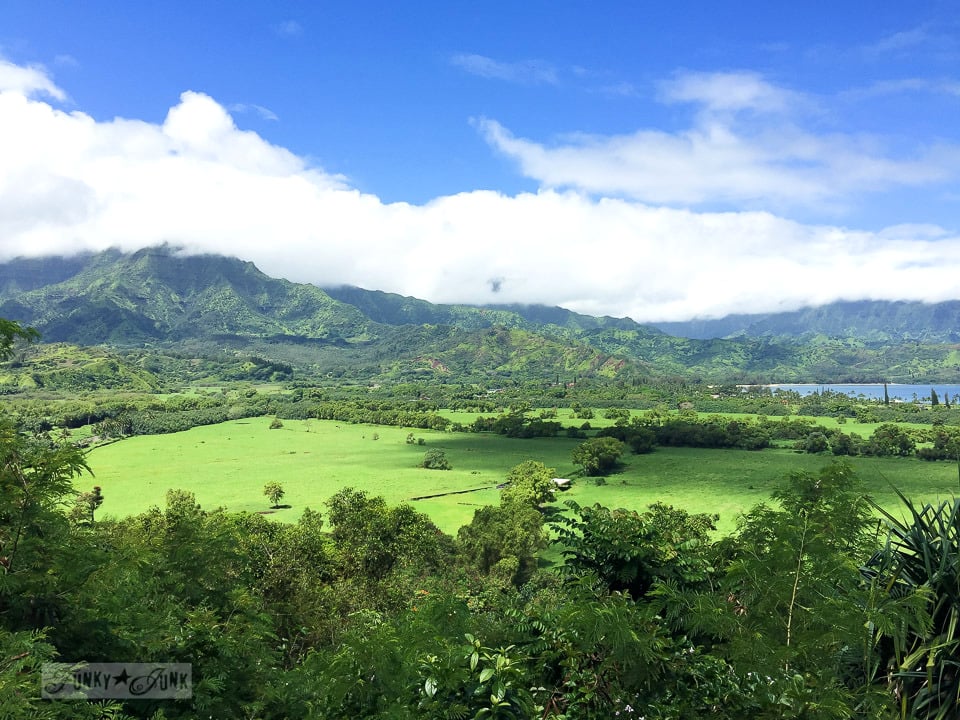 So I took a little trek along the coast, towards Hanalei.

WORD. It was one of the most spectacular drives I have ever laid eyes on.

It made me want to cry. 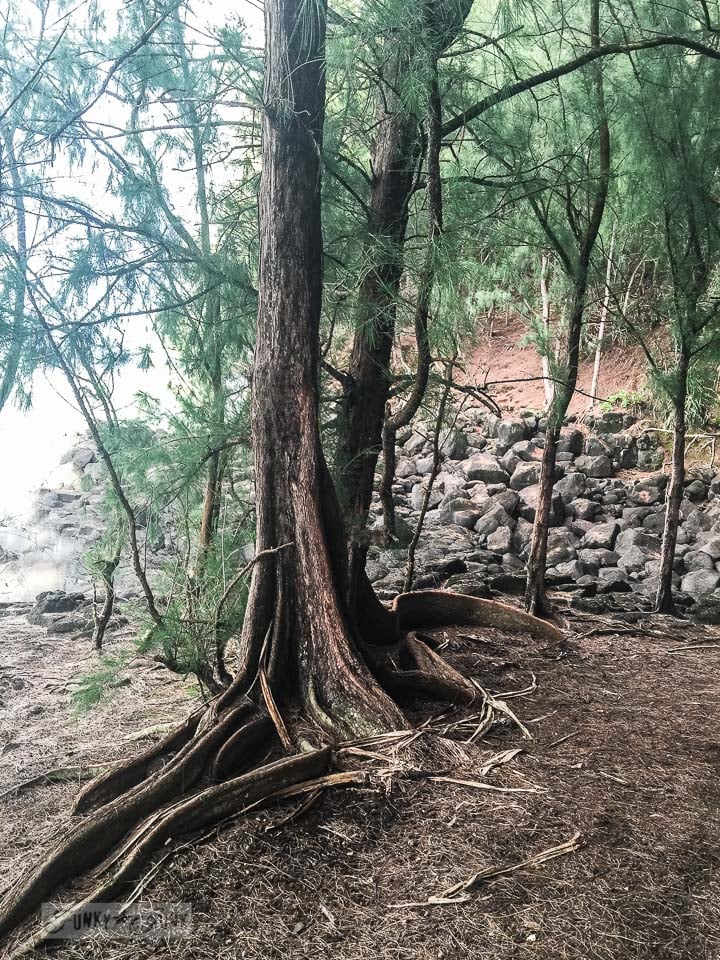 Passing through the town and beyond, I was curious where all the one lane bridges would lead. So whenever there was a cluster of cars along the side of the road, I pulled over to snoop. 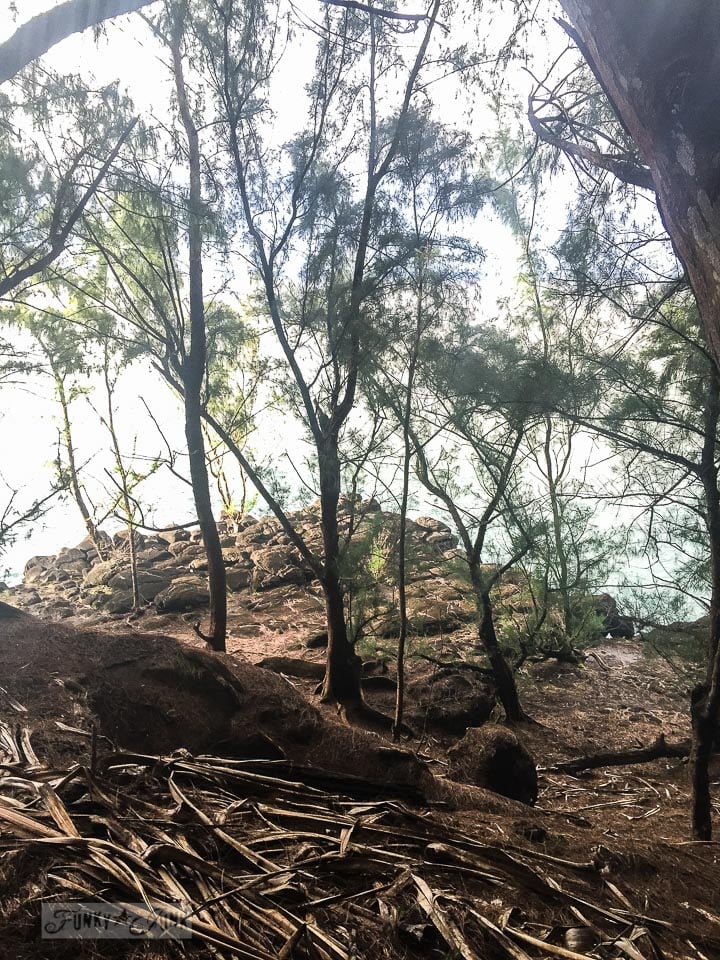 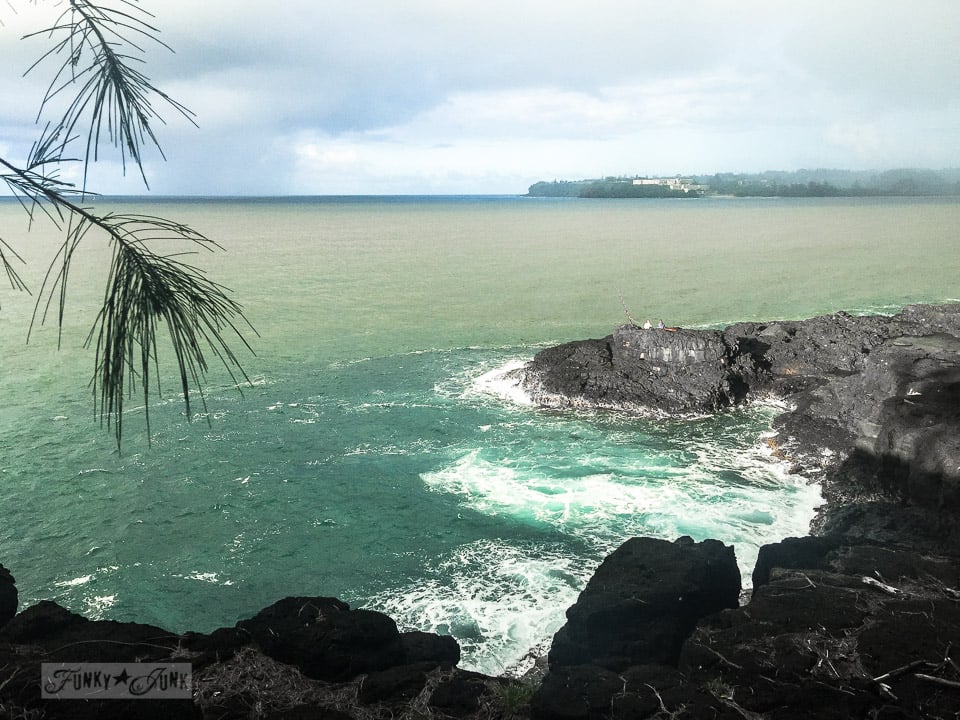 But darkness was fast approaching, and my windshield was fogging up, and wouldn’t stay clear.

What is going on…

I quickly learned that going with a cheap, older car was NOT the right move in this place. With heavy rain comes deep puddles, and lots and lots of moisture. My sorry, crap happy windshield never was completely clear until I took a drive down south. Which did me no good up north. The defrost on this car was the worst, leaving some kind of white film that never left.

My car ended up being a total bust, where I could barely make out where I was driving the entire time during drizzle. Not. Good. I hate to complain, but this part ruined a big chunk of our stay. Being paranoid not being able to see got old fast. Night was ridiculously hazardous. Crazy bad car.

So my advice? Go newer SUV. All the time. 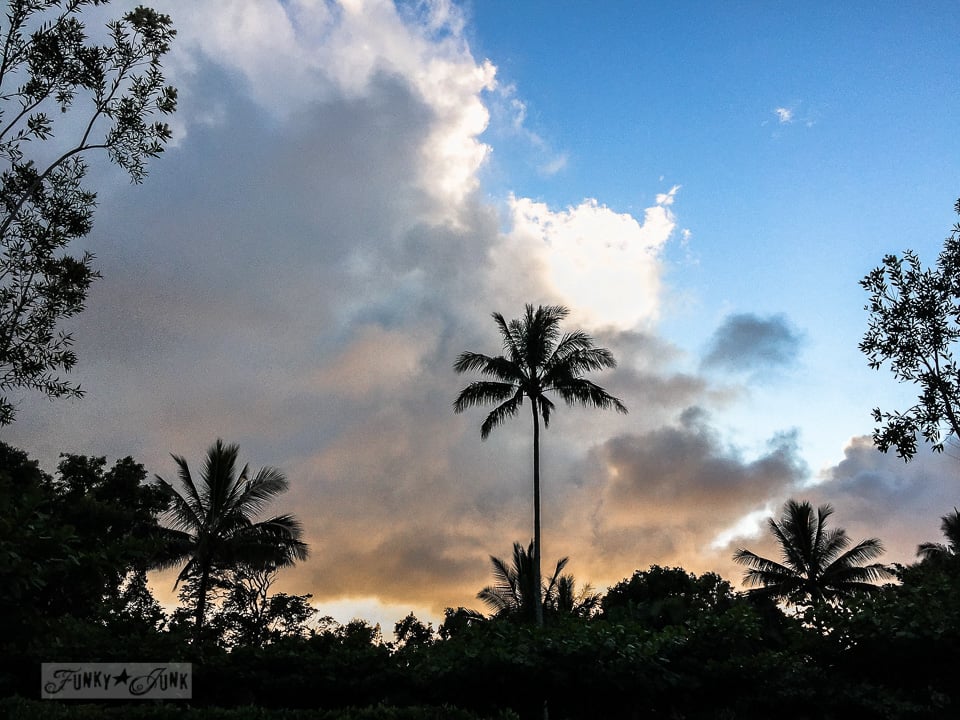 While it wasn’t a beach front sunset, I did manage to see it peek through our rain forest on the property… 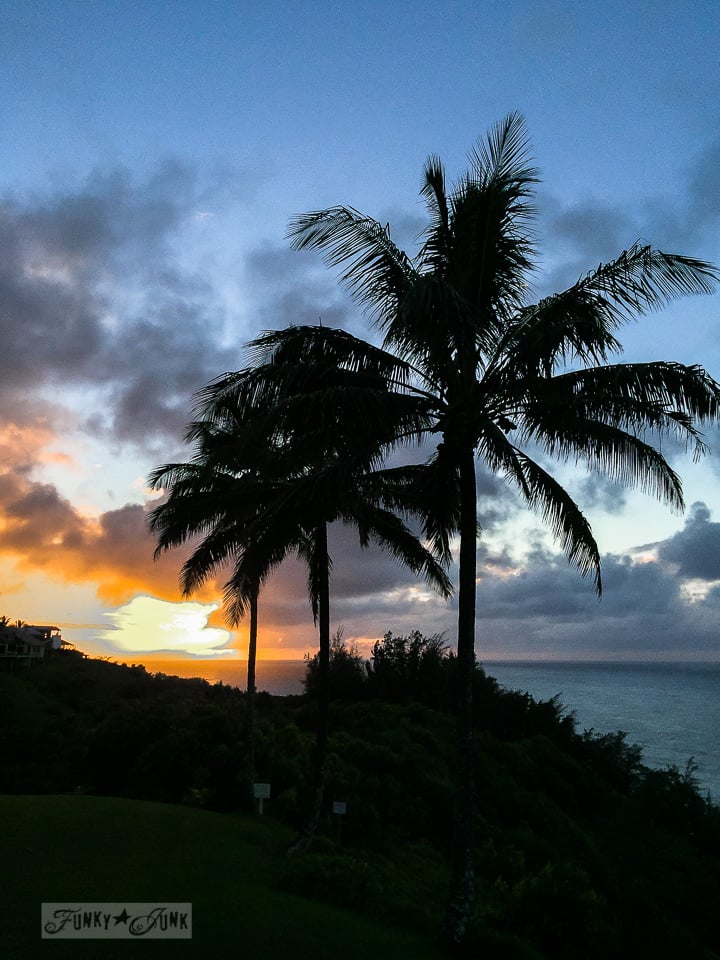 … and at the end of all the rolling hills.

Next up, the outstanding helicopter ride over the entire island… and a few other beautiful surprises thrown in for good measure.

With a little more drama, just to keep things interesting… 🙂

Have you been to Kauai? Which area did you stay? Did you like it?

See all our Hawaii 2016 adventures HERE

12 thoughts on “First impressions of Kauai, and our condo”