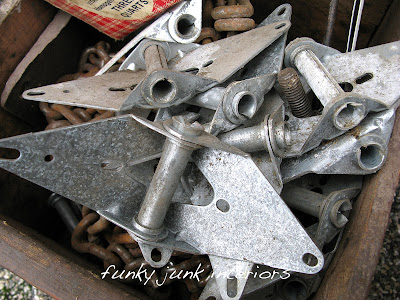 #2. I had been knocked out flat with my current cold.

So I slumbered along my merry way, brewing a pot of java and attempted to focus on a few SNS entries. I heard something clang outside. I ignored it because my coffee pot beeped at me and THAT always comes first. CLANG. Huh? CLANG CLANG.

I shuffle on over to the picture window with my fresh coffee, lazily wiping morning fog from my eyes when I spot this next door… 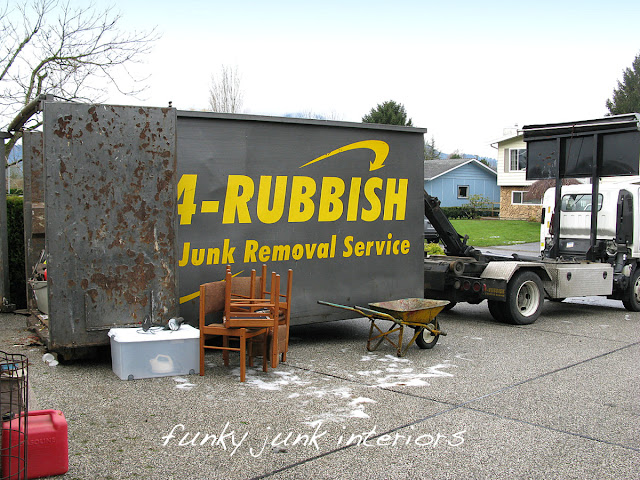 Well now… my coffee cup could have gravitated in mid air with my mad dash to find my jeans. Threw on the ol’ farmer’s jacket, grabbed the waiting cup in the air on my way out and SPRINTED next door.

Trying to remain all calm cool and collected, or as much as I could with bed head, a stuffed up sinus head congestion, and mud on my shoes from the run over (next time I’ll use the road), I took a deep breath and calmly walked to where the guys where throwing stuff. AWAY. GASP!!!! 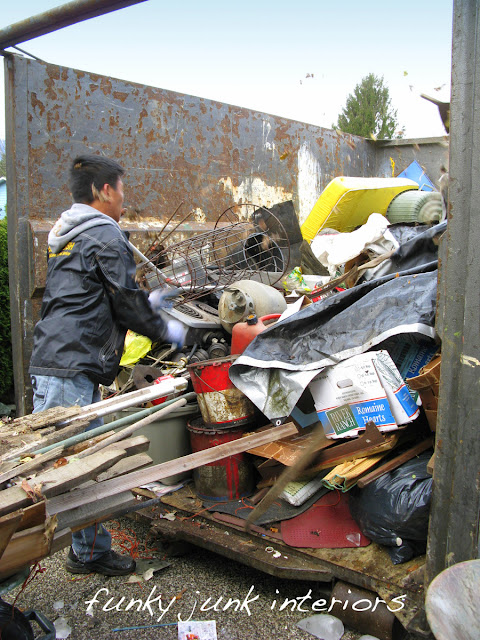 See that round metal whatever it is? 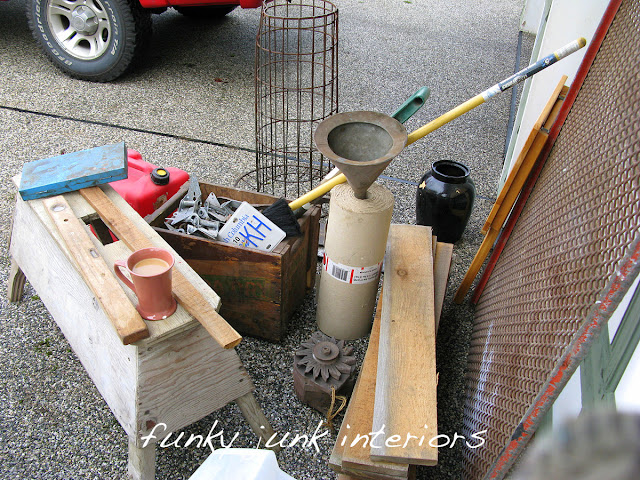 It went in my ever growing pile. And see that cool sawhorse upper left? That became my bench. I sat there and watched every fragment that went into that truck and was a complete pest asking for stuff I wanted.

They soon got the drill. They started asking ME if I wanted this and that. Atta boys. 🙂

It took abit for them to realize what I was after. Imagine turning away brand new things and wanting anything with grease or rust on it. 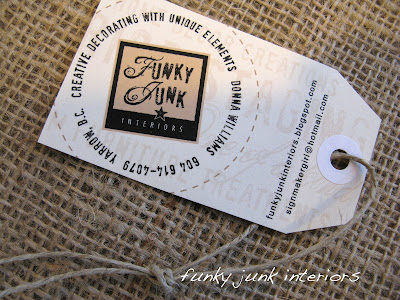 I should have given them my new blog card. 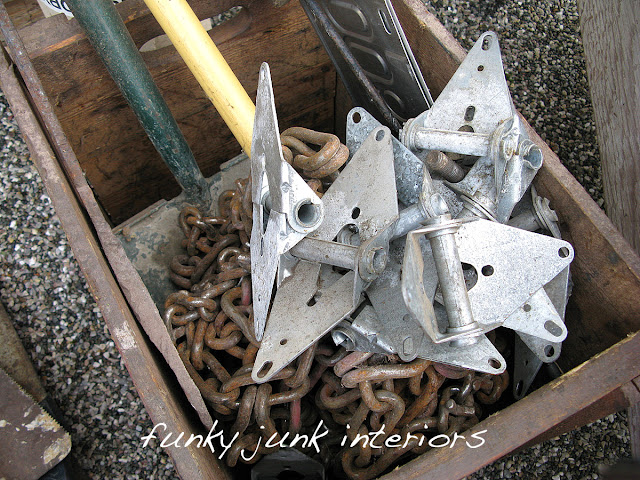 My next door neighbors are moving after being there for many many years. The Mr. was super into collecting and building. So when the owners came out of the house and spotted me, they laughed and invited me to take whatever I desired, for it was all being thrown out. Today. They even added to my pile themselves! 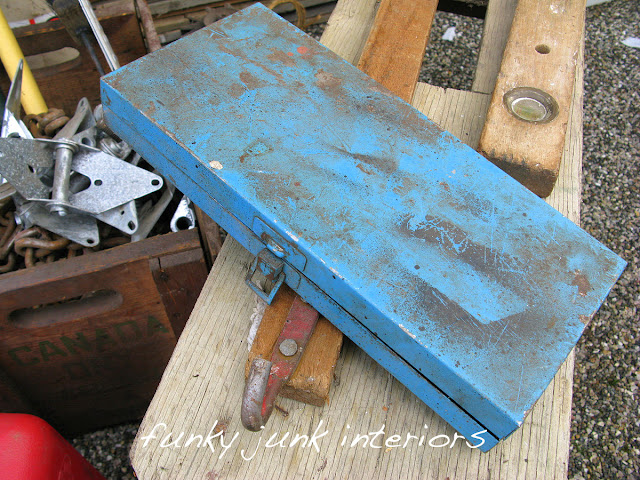 I decided I didn’t give a junkin’ hoot what I looked like that day because I matched all the grit and rust on this stuff anyway. You are what you collect, yes?

So I just became ‘that chipper homely girl next door.’ Did you know you can charm your way into people’s hearts by being just amazing and loving their junk? I mean, they LOOKED at me so at least I didn’t scare them or whatever. 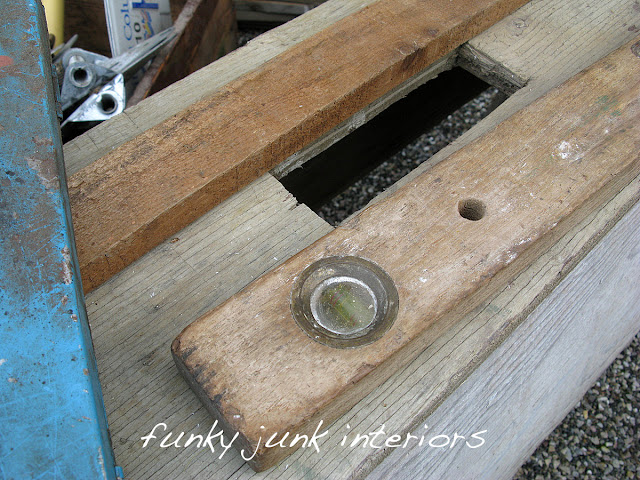 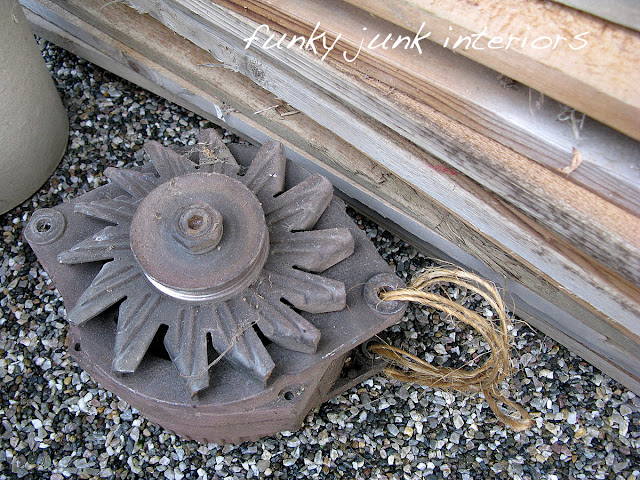 Don’t even ASK because I really don’t know. Nor care. It was cool and rusty and starburst  like so I was good to go. The Thing even came with it’s own binder twine handle so it was truly made for me. 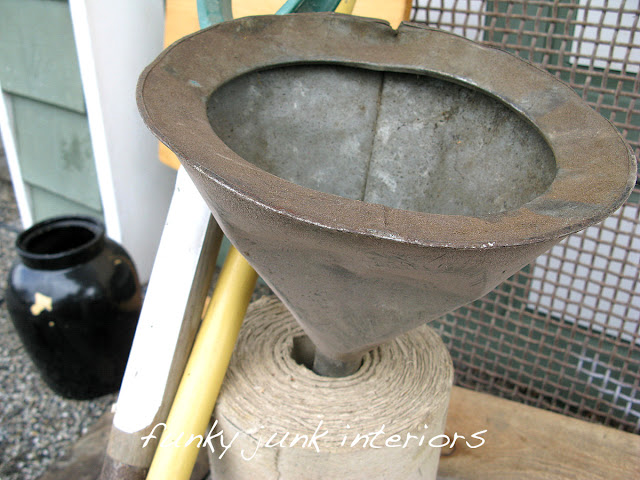 That crackled black pot which is VERY old is now sitting on my stairs looking mighty swanky in her new home. 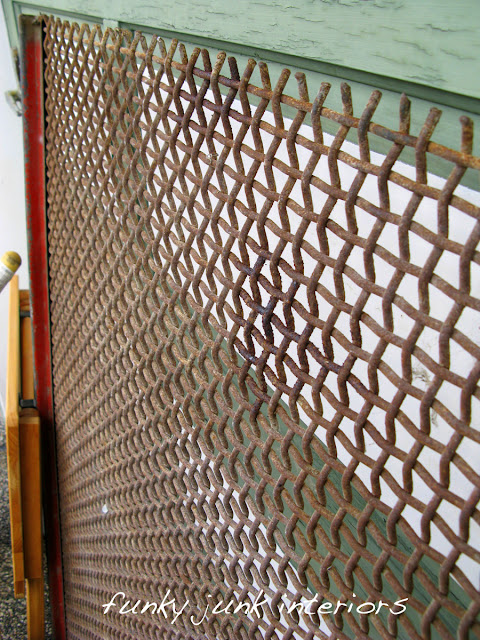 Darn it. I forgot this sheet of mesh stuff. I’ll have to go back for it. It even was in it’s own red beat up frame. 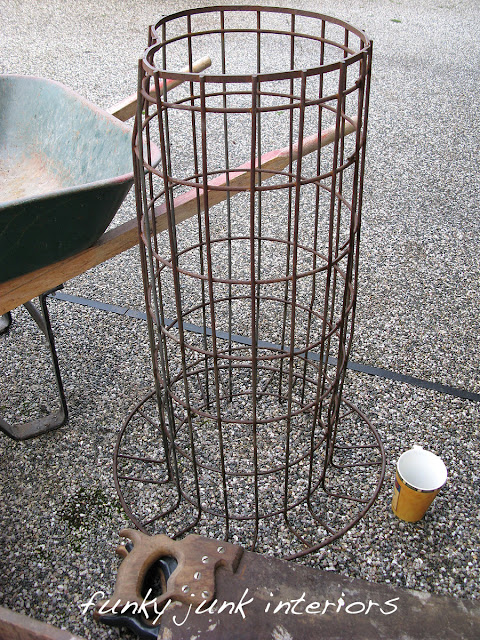 No idea here either, however I figure I’ll have the most stylin’ sweet peas in my flower garden next summer. Is this for compost or something? 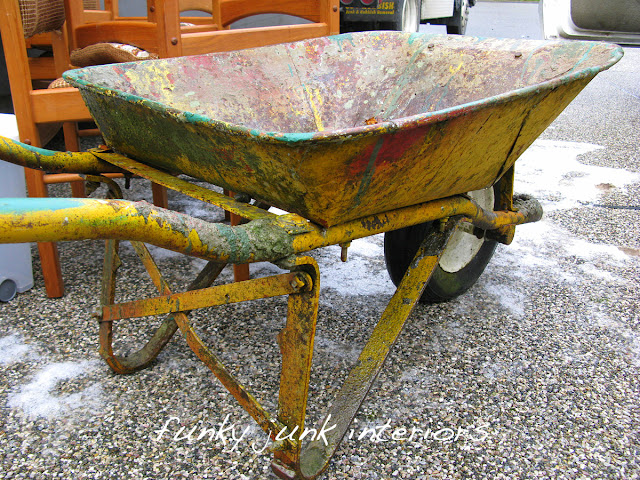 I hear ya. But it’s so perfect for flowers. It’s just deep enough and level along the top. Build it and they will come, yes?? 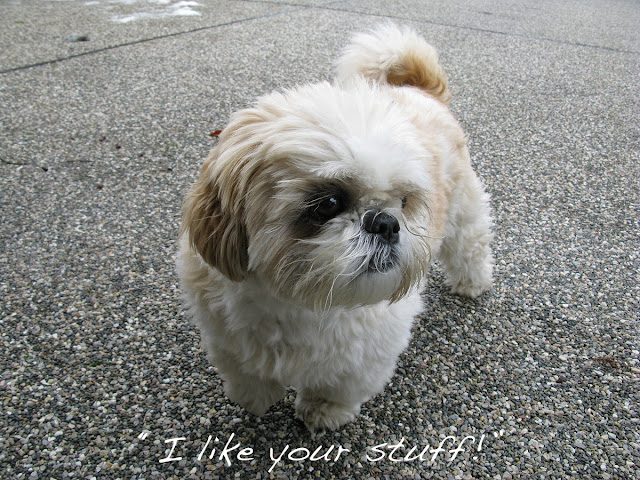 Thanks pup! You’re not so bad yourself. 🙂 Junk fans everywhere you go these days. 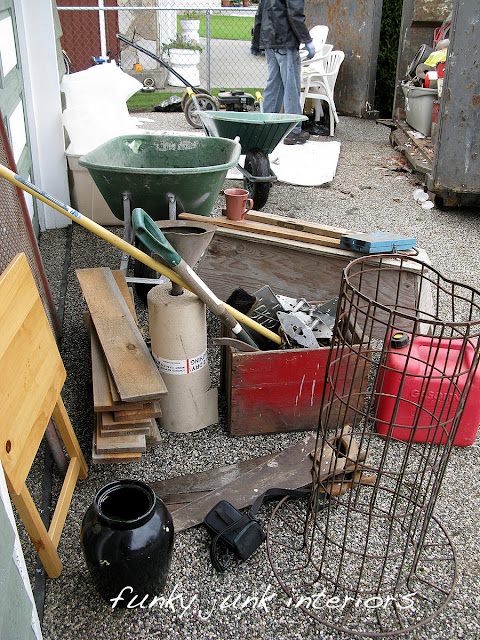 At one point I had to run back home for my camera. It was a very risky move, however I attempted it when the guys were in the backyard reloading. They said not a word as I clicked away and held up my hand for certain stuff during the junk auction event. I have NO idea why they didn’t throw me out. Not a one.

See that small pile of boards upper leftish? I made something with those this weekend. 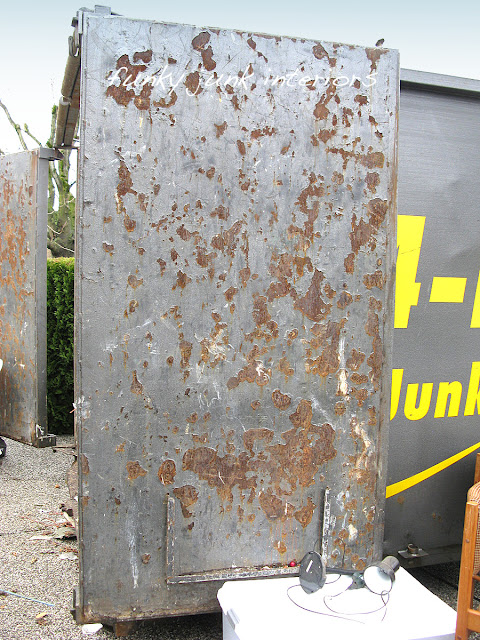 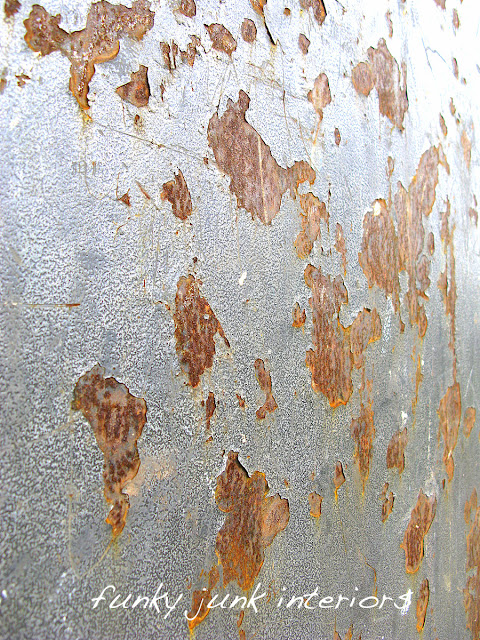 Is it WRONG to love the patina on the trash truck’s doors? 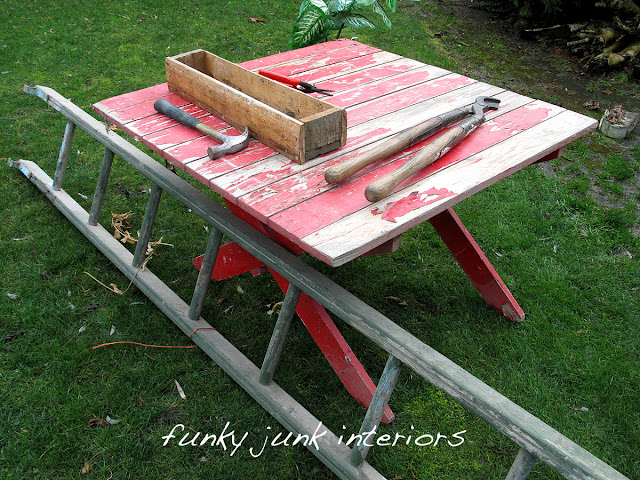 Check out that ‘coffee table’ all themed up for Christmas! So is the ladder for that matter. 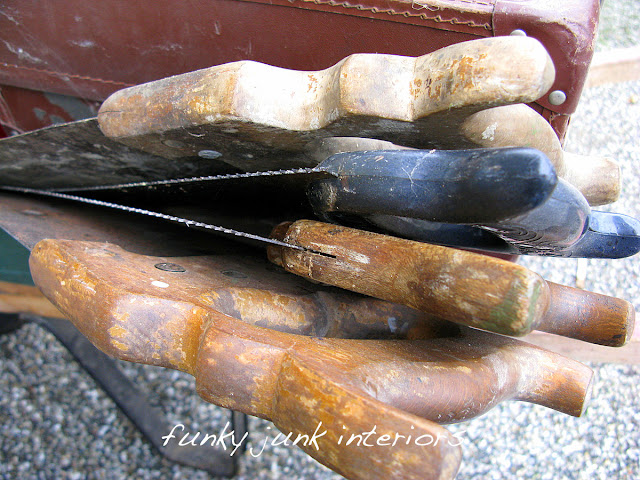 I just liked the wooden handles. Ok OK. I liked the metal rusty saw part too. So they became mine JUST. LIKE. THAT. 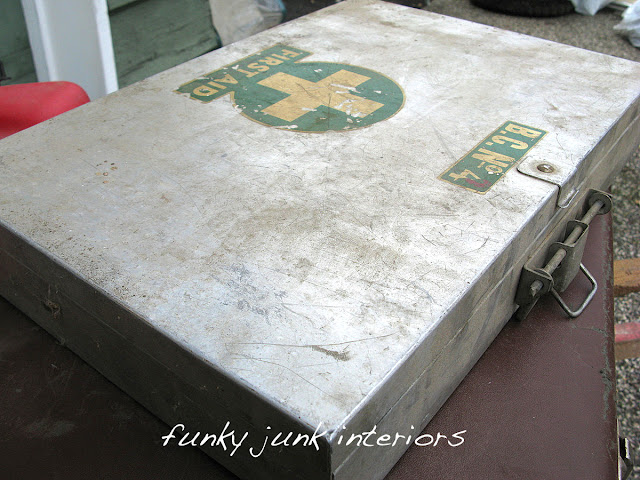 This one made me think of Miss Mustard Seed. She has a hankering for red cross collectibles. I guess green is the Canadian version, eh? Maybe she’ll trade this for coming over and making me 2 wing chair slipcovers AND 1 sofa one and decorating my entire Christmas tree with her amazing creations. I think I have her number… 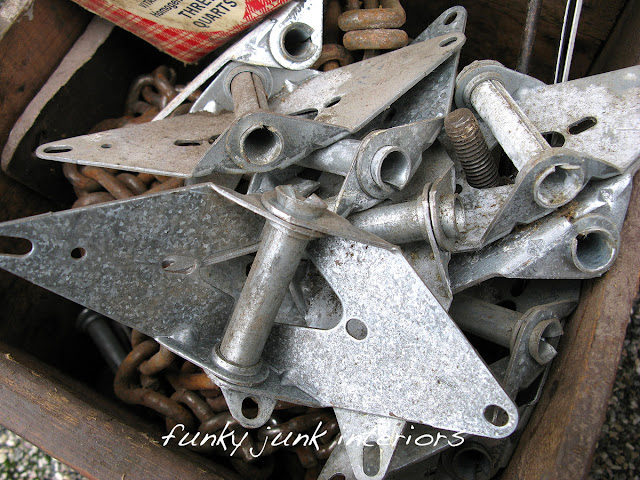 Oh dear sweet metal galvanized hinges, I LOVE you so! And I made something out of these this weekend too. 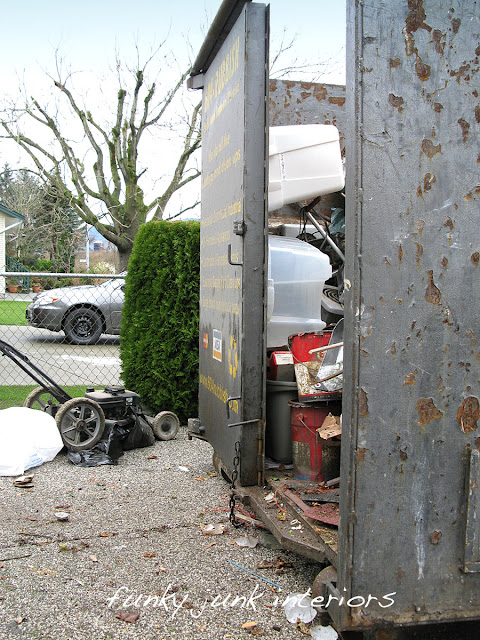 And then the show was over. Just like that. With little warning. I hadn’t even finished my second coffee yet in ‘the bidding lounge’. 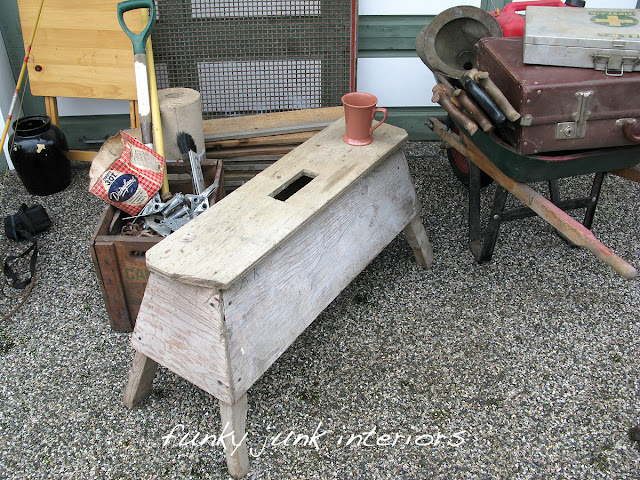 I’ll forever have the fondest of memories from this event.

And I only walk away with one small complaint… 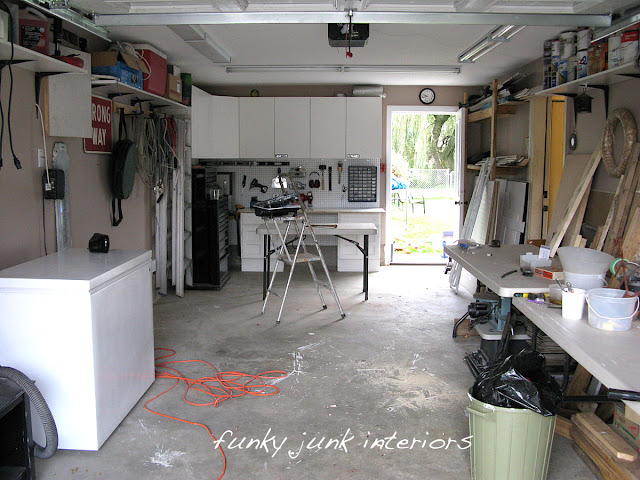 91 thoughts on “A Heaven sent junkin’ event right next door!”