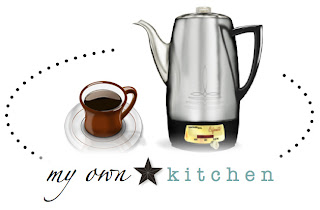 Welcome to ‘My Own Kitchen” story, Part 3.

All installments to date can be found HERE.

Where we left off: 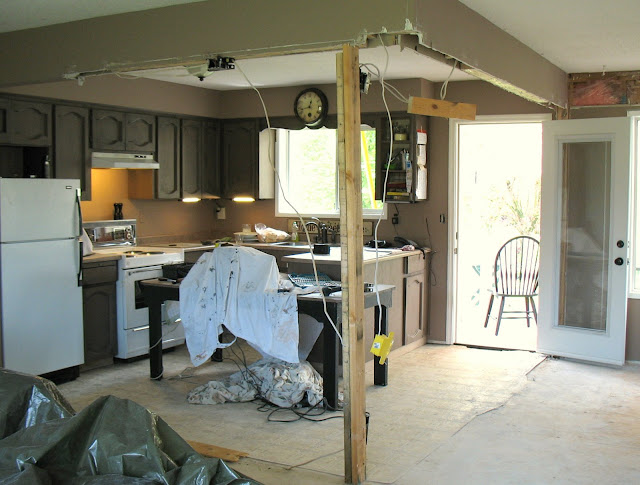 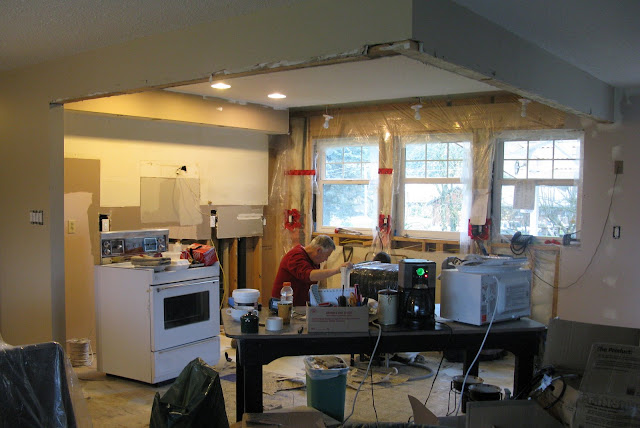 In Part 2, with the old walls out and new windows in, it was finally time to do the next step. 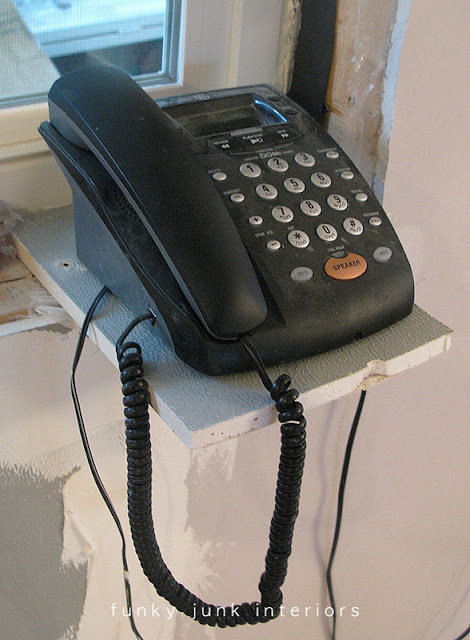 That happy go lucky drywall phase we all love. 🙂 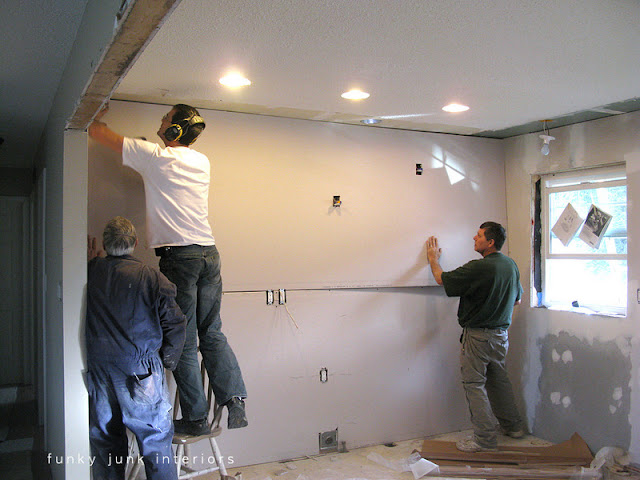 My Extreme Dream Team and myself worked on the drywall. They’d put it up and patch and I followed along with the finetuning. Messy messy messy stuff! I really REALLY love those nice loooong pieces of drywall you see above. Less patching. 🙂

Now before we move on, look at the ceiling. See all that patchwork from where the old cab headers use to be attached to? I wasn’t getting new cabs in all those areas again so I had a choice of patching that nasty popcorn ceiling like crazy (which never looks great) or covering it up with something.  More to follow. 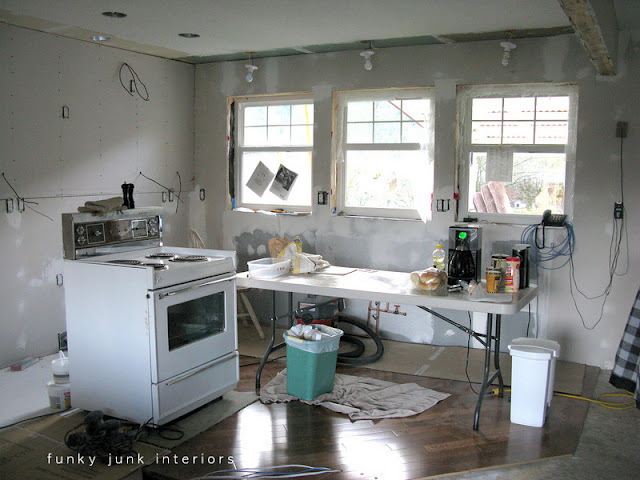 Note the floors? They snuck in. We were in quite a mad rush to beat the cab deadline so sections of the floor was laid where panic ensued and volunteer availability reigned.

The hardwood was laid with a diagonal in the kitchen area to follow the soon to be angled kitchen island.

With the drywall in place, it started to feel light and bright. Total use of the kitchen was also still in effect, including that beater range. 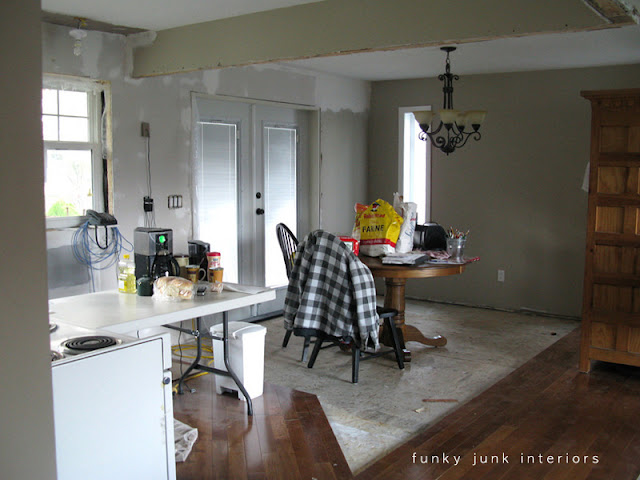 And then the painting marathon began. A soft neutral was used for the entire area which turned out to be the perfect shade of taupe without looking green nor pink. Taupes are difficult! 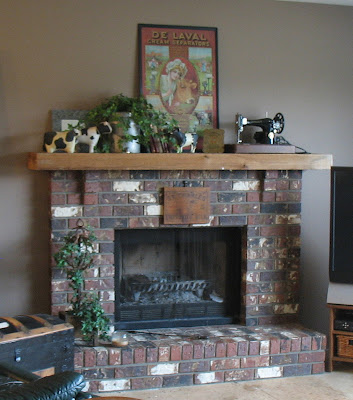 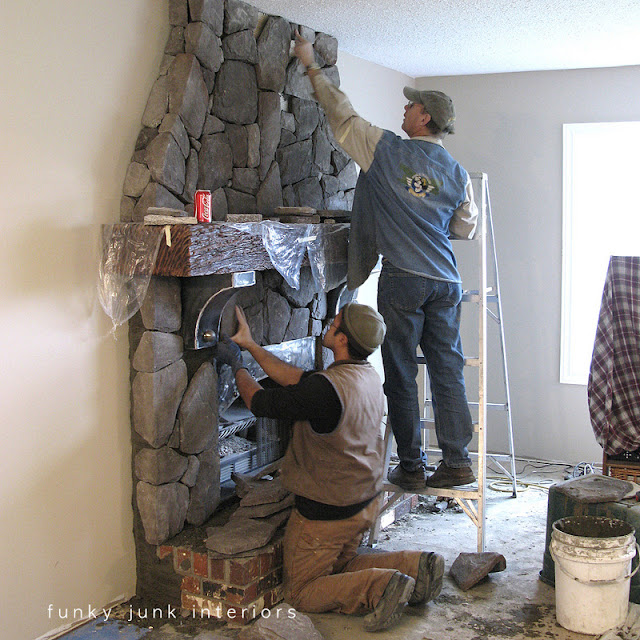 … the fireplace going in.

Friend Dan and his team refaced and revamped the old brick fireplace by covering it with cultured stone, and created a funky wooden beamed mantel with metal influences galore. It’s become an amazing focus for the entire upstairs.

More on the fireplace build is HERE.

The fireplace was a gift. Dan and team donated the labor and required supplies and Yarrow Hardware donated the stone. Am I blessed or what! 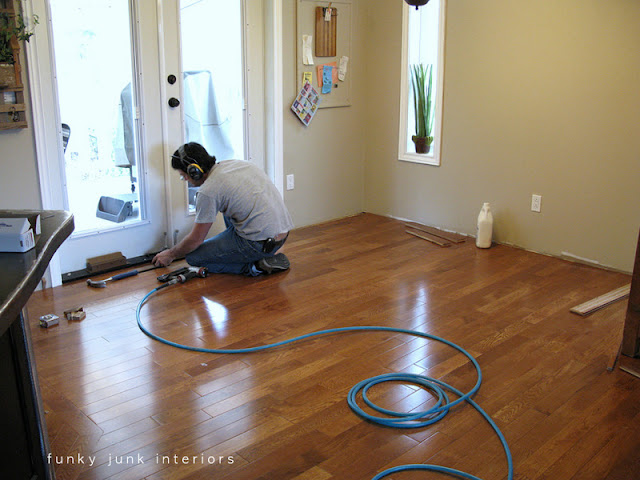 And then Ron donated his time to install the floors, leading the rest of the team helpers. He’s a floor artist. 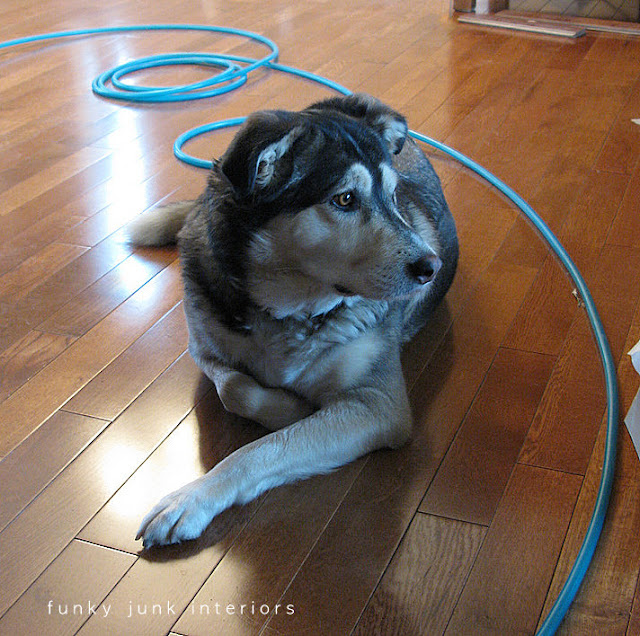 I had purchased my flooring a few years prior and had them stacked in my basement. It was such a joy to see them finally in full use over top the plywood flooring I’d become accustomed to.

And then we were finally ready for the BIG day. 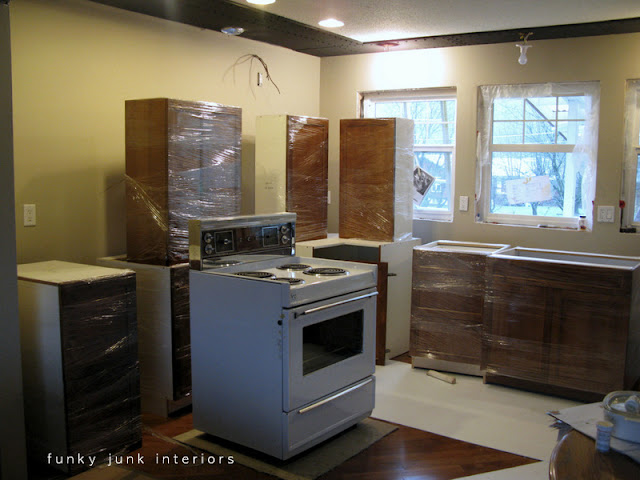 Because the team helped me with soooo much else, I was able to swing the purchase. I bought a new kitchen. Alder shaker styled cabs, rustic hardware and badly needed new appliances. 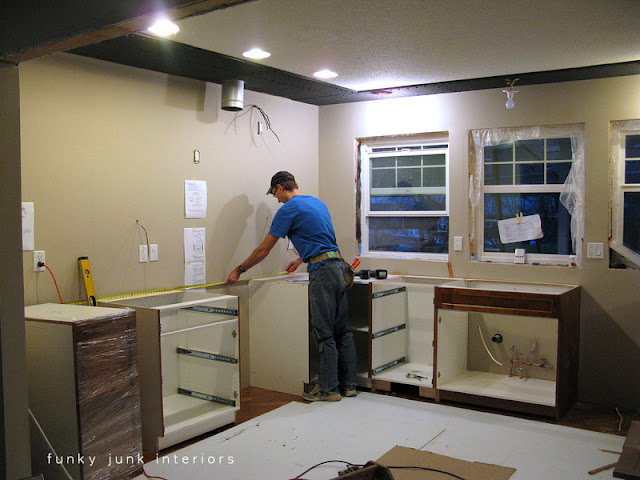 I was at home from work the day the cabs were installed and it took everything out of me to NOT HOVER. But I did alot of walk throughs because… I had to! I was so excited.

The install went FAST. This guy was an absolute pro.

See that black stuff on the ceiling in the above pic?

One of the most asked questions I get is “What is that?” Today’s you’re lucky day. 🙂 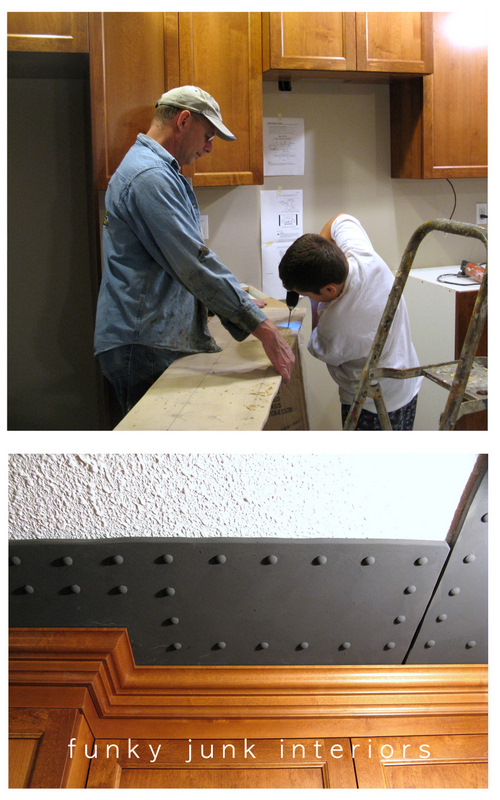 I took my ceiling patched dilemma to artist friend Dan. What I really REALLY like about Dan is that nothing is impossible in his eyes. And being an artist, he doesn’t think traditionally. And neither do I. 🙂

I had sketched out some kinda panels to cover the ceiling mess, and he improvised with his take on it.

The board is simple MDF you can see being drilled in the above 1st pic. The panels were installed in place, then plugs were fitted into the predrilled holes for the illusion of rivets into metal sections.

It covered the ceiling gaps beautifully! And added massive funk. 🙂 The panels were then coated out with a special paint by Sophisticated Finishes loaded with metal pigments. If I hit the panels with acid, they will rust. It was my intent to do so but after seeing the black basecoat, I left them as is.The black just looked so sharp! 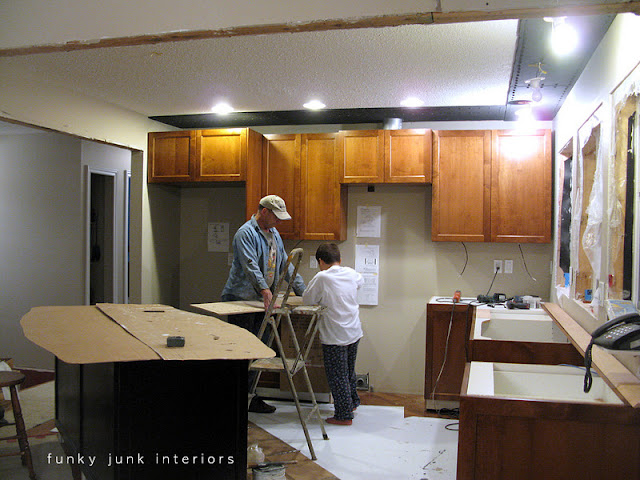 Dan was about to create a very one of a kind metal island topper as well so the cardboard above was to simulate the shape and size I desired. Something so permanent and heavy needed a trial run as there was no turning back once it was a done deal. 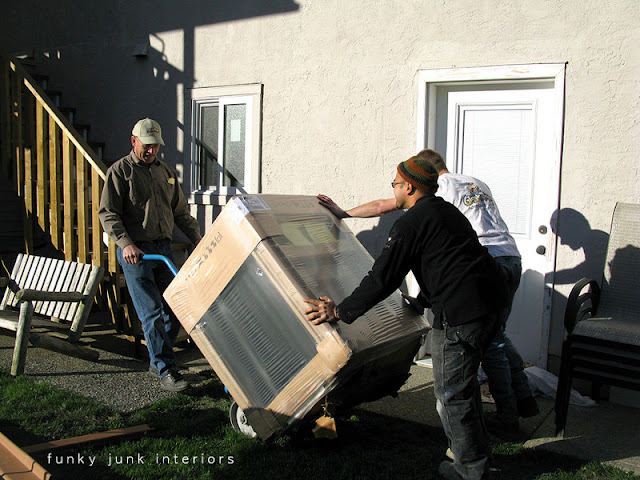 And then it was appliance day. FINALLY! The beater stove hit the curb and in came the glossy black and stainless Bosch jewelry.

Have you ever driven an hour with a brand new fridge standing straight up in the back of a pickup? No? Ah… you haven’t lived yet then, my friends. 😉 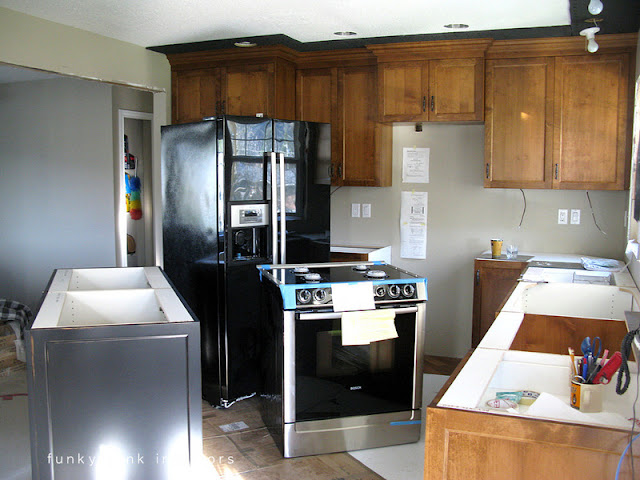 What I adored about these appliances (other than the quality) were the fact that they were black AND stainless. I had the black fridge outfitted with stainless handles so it would blend with the other pieces.  Aren’t they purdy? 🙂 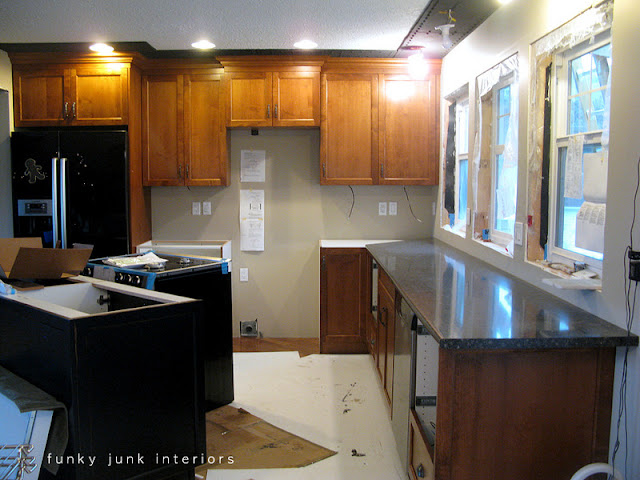 And then the counter tops arrived! Although they look like granite, they are laminate.

The counter tops were generously donated by Columbia Kitchen Cabinets, Abbotsford BC.

So things are looking quite neat and organized, are they not? 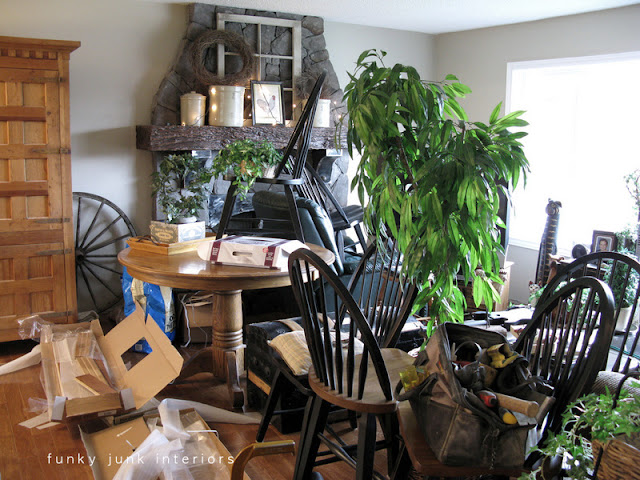 Because, next up is the complete reveal with all the nitty gritty details.

(If you’re new here and are curious about all the donations, you can catch up in Part One. )

24 thoughts on “My Kitchen Part 3 – drywall, cupboards and floors”