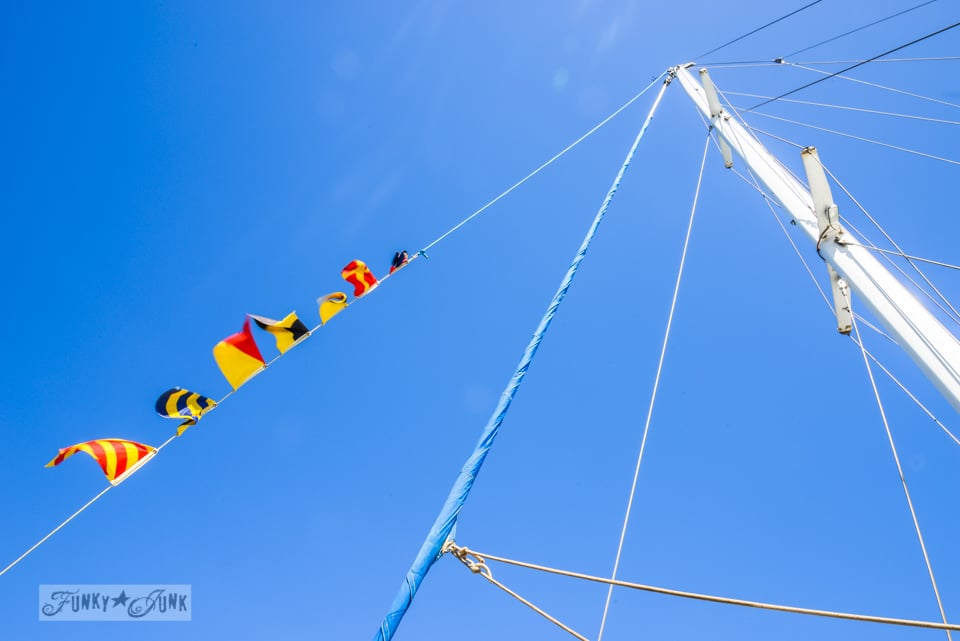 Lest you think my blog is about to turn into All About Maui Inc., I promise you, it isn’t. Unless I move there of course. No plans as of yet, so I think you’re all safe. 🙂

Since coming back from our Maui vacation, it’s been a little rocky getting back on schedule. I think I finally experienced what true jet lag was. I really couldn’t move around much for a couple of days. And then the day job needed me as soon as I finally woke up.

I’m also really missing my Kona coffee fix. Kona has a slight sweetness other coffee doesn’t, and I crave it! Everything else tastes like dirt in comparison. Sheesh. So I think I’m going to call the company on the empty package and get a carton sent to me. Yep. It’s just that serious….

Anyway, I’m kinda glad I have these pictures to share, while I try and find time to do a little DIY and get back on track again.

Today, I’m going to share what I think is the best way to snorkel and snuba while on Molokini. 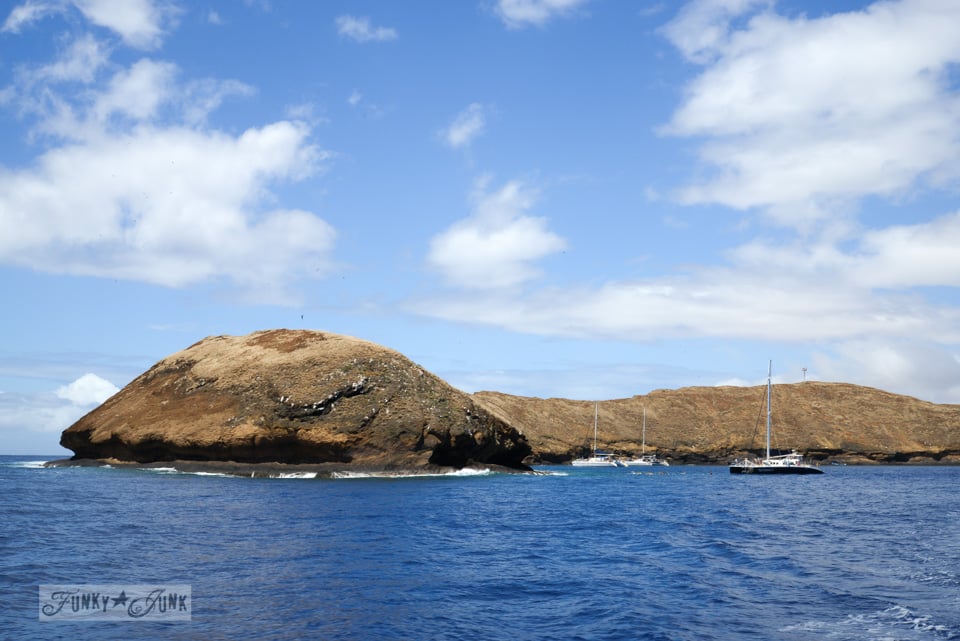 Molokini is a sunken volcanic crater in between some Hawaiian islands that is world famous for it’s snorkelling, and now snuba. (underwater snorkel)

It doesn’t look like much. If you google it, it resembles an eclipse. Air shots are much more impressive. But it’s all about what’s under water this round. Since there is no sand at Molokini, the waters are crystal clear, and when the sun shines, the coral lights up like a Christmas tree. It’s amazing!

And the tropical fish are truly abundant and gorgeous! No large sea turtles where we were, but apparently there generally are.

It’s ok… they’re super big and a little frightening to swim with if it isn’t an everyday thing for you. I ran into a few in our own private snorkel bay and that was enough for me.

The best way to snorkel while on Molokini 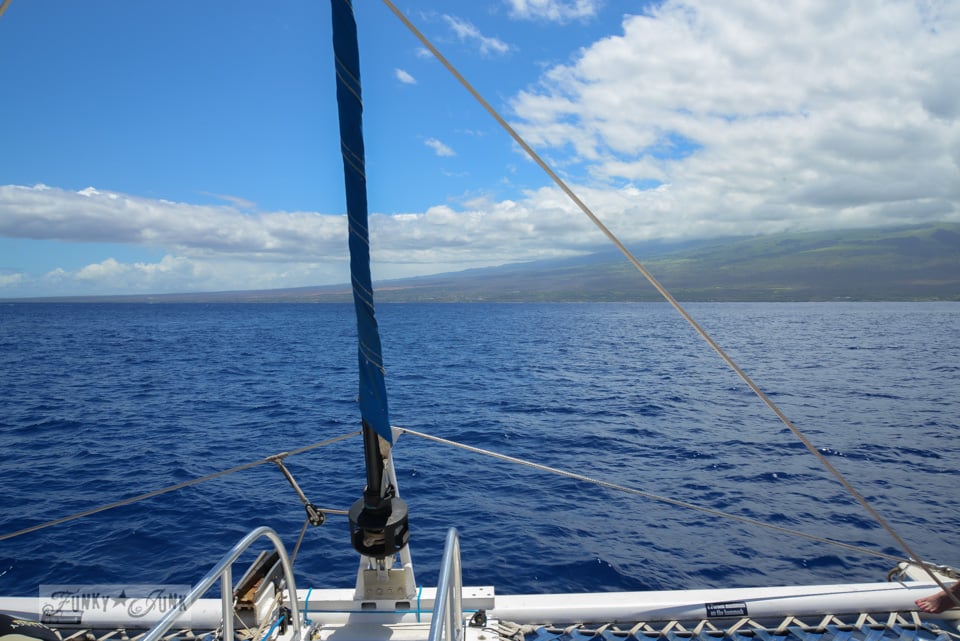 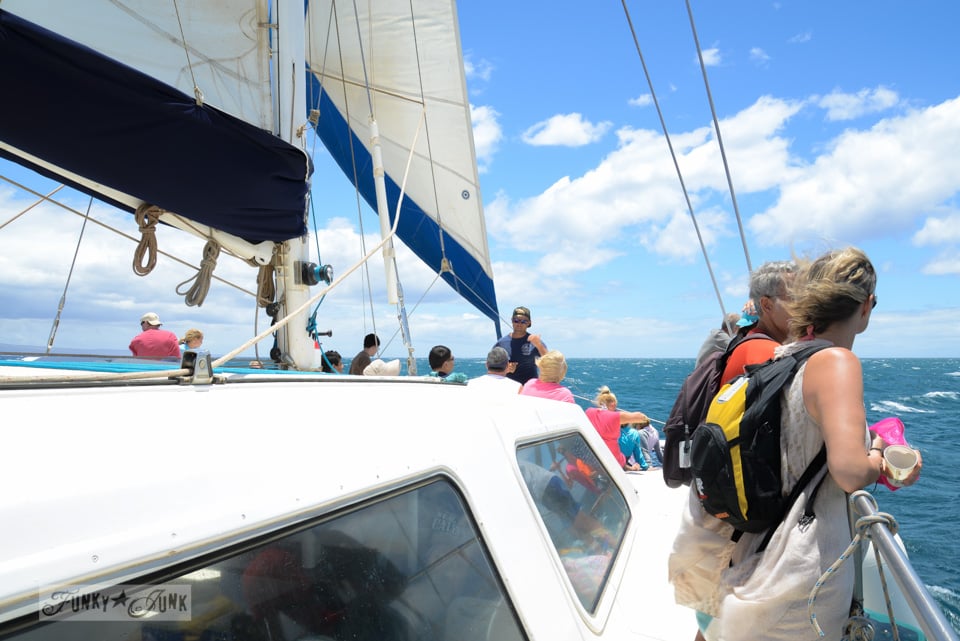 Sounds obvious, but it kinda isn’t. You can pick a large charter boat that brings hundreds, or you can choose smaller that can carry 40. We chose the smaller variety.

And honestly, that was enough. When everyone is walking around, that’s still a lot of people. It was recommended to us to go small, so that’s what we did. And we were very happy with the attention to detail.

We chose Trilogy and the crew were light hearted and fun!

Also keep in mind, there are motor boats and sail boats. The treat about a sail boat is they will turn off the motors, pull up the sails and you’ll glide along in complete silence. It’s awesome!

2. Go early. The earlier the better.

An honest snorkel cruise will tell you to go to the early AM one vs the PM ones. The water gets really rough later in the day, and snorkelling is best when the waters are as still as possible.

So we needed to be at the marina by 6:30 to load. Ouch. Early while on vacay, however this round, the AM departure is not a gimmick. Just do it. Once we were out in the water even a couple hours later, it was really noticeable how much choppier the water got. 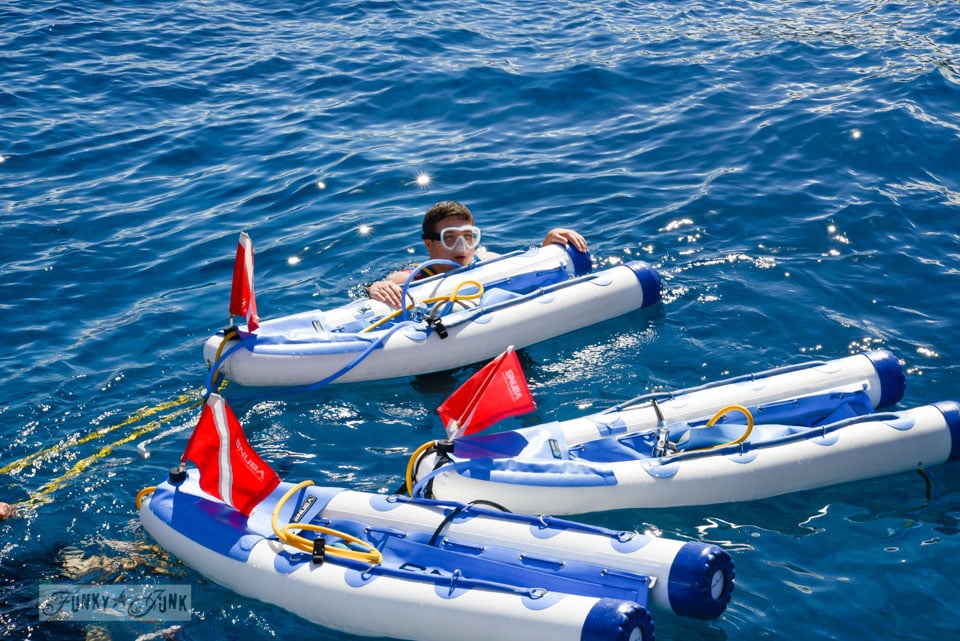 Snuba isn’t apparently new, but it was new to us. It’s underwater snorkelling that allows you to go about 20 feet underwater with only a 10 minute training session. ANYONE can snuba if you snorkel.

But not all charters offer it, so if there’s someone in your party that is adventurous, choose one that does.

Each snuba diver has their own tank on a floatation device with an airline. This allows them to dive without carrying any heavy apparatus on them. They put on belts with weights and off they go. My son had a blast!

Snuba is an extra $50 or so over and above snorkelling. But well worth it if you go all the way to Hawaii!

I stuck to snorkelling. That was enough for me.

Tip: If you ever rent your own snorkel gear, rent the BEST. It’s designed so water doesn’t enter the tube back down into your mouth should a big wave cover you. 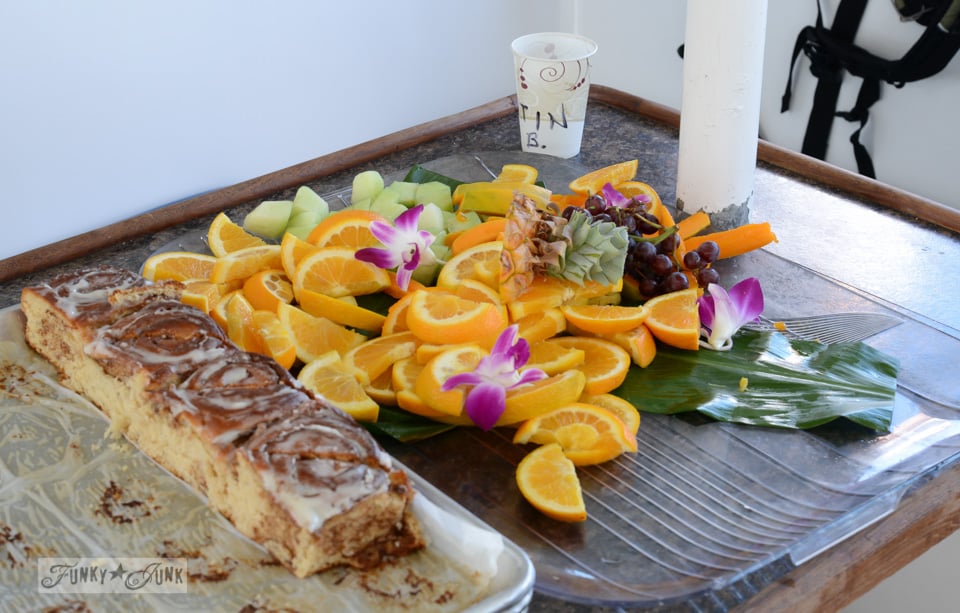 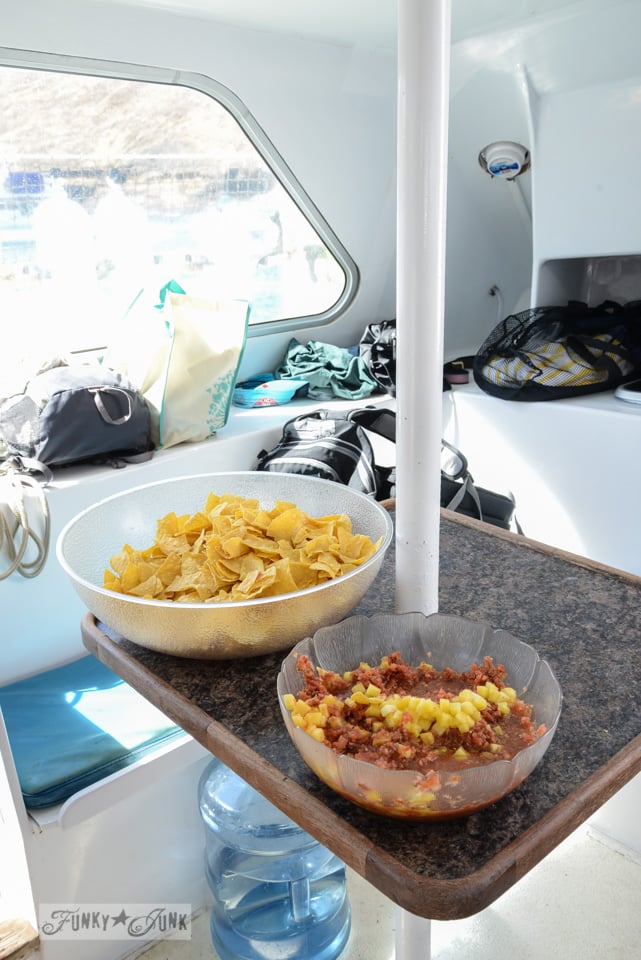 Our own excursion was from 7 until after lunch. Some last all day, making several different stops. I felt ours was way long enough. Snorkelling takes effort and the wind from the boat ride will tire you out.

The cool thing about these trips are the food that’s included! For breakfast they served hot coffee and homemade warm cinnamon buns, lunch was BBQ chicken, rice and salad, and snacks in between everything were chips and homemade salsa, as well as ice cream.

Trust me when I say, I felt very fancy walking onto a sail boat with my beach bag in hand, grabbing a coffee and hitting the deck. What a way to greet the day! 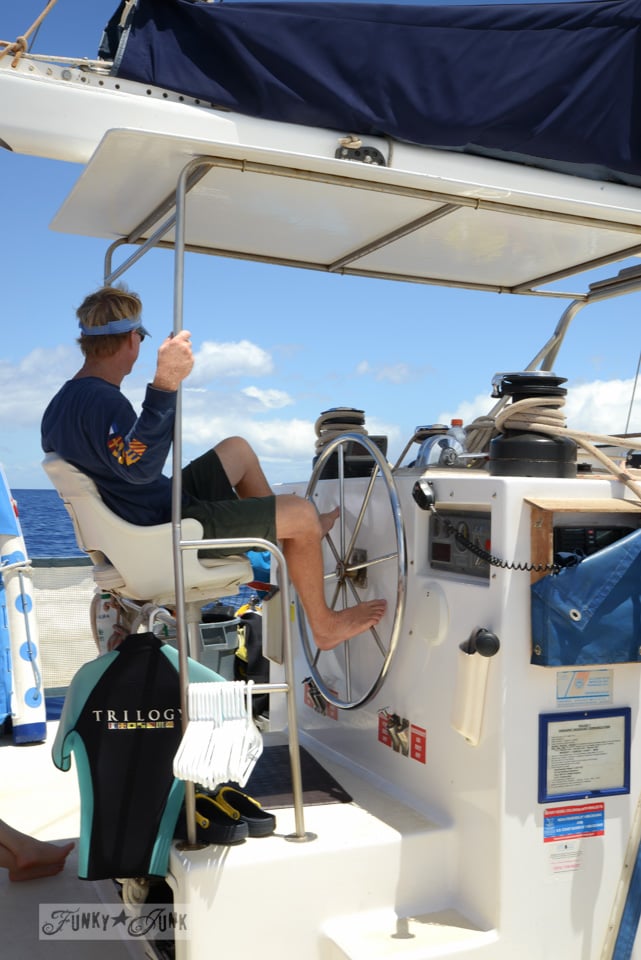 5. Use the floatation devices and outlast everyone!

Proficient swimmers like to swim without anything holding them back. They dive into the water, come up for air and shoot the water out of the snorkel pipe thing.

Me? No way. I threw on a waist device (looked like a big fat sponge belt), entered the water down the stairs, and worked hard to get to the shore. And felt fatigued once I got there, only to have to return and work twice as hard against the ocean current to get back to the boat.

The 2nd time I went out, I also asked for a boogie board. That made all the difference in the world. When I felt tired, I climbed up onto the board to catch my breath. Best thing I ever did. I could have stayed out there all day. 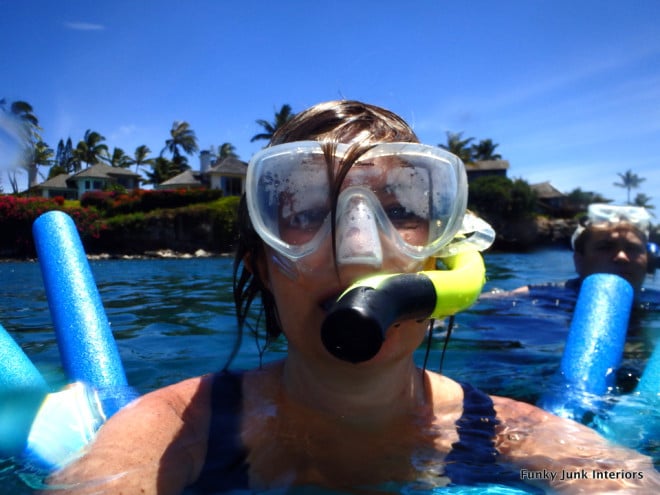 Snorkelling gear is pretty hawt, this I know. 🙂 We’re snorkelling in our own bay at the condo here, but you get the idea. I used pool noodles to hold myself up here and it worked fantastic. 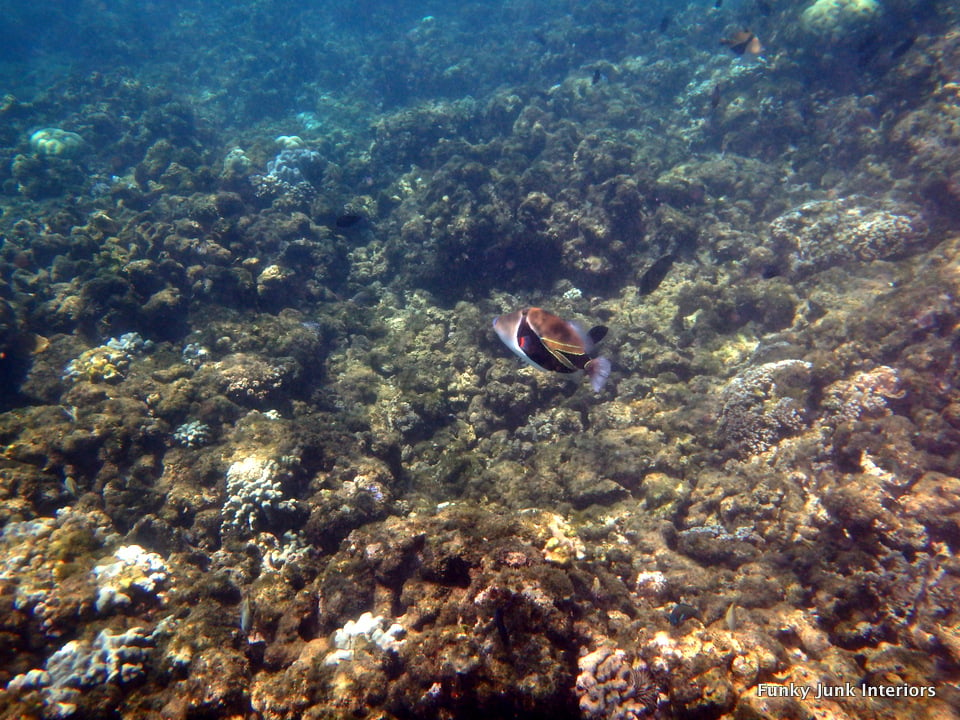 This is a shot from our own bay. As luck would have it, the underwater camera we rented ran out of battery power during our Molokini cruise! Drat!

The fish were equally gorgeous in our own bay, but the coral is covered with mossy stuff. On Molokini near the shore, the coral is squeaky clean and gorgeous.

That right there made the entire trip well worth it, because it’s something you can’t get on the beaches. 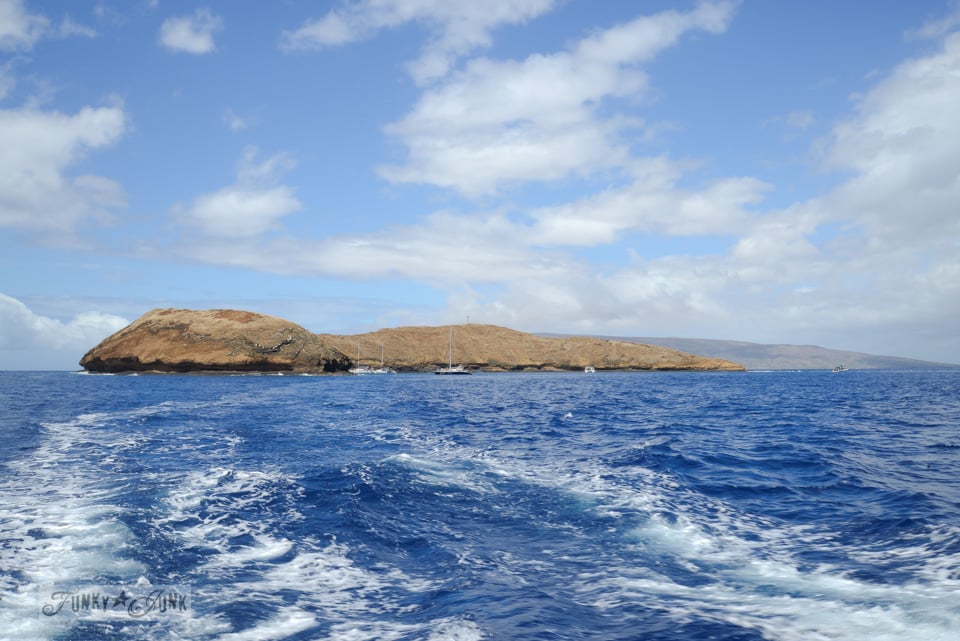 It appears that if you book through the agents at the hotels, they land you the best deals because they purchase blocks of time. That’s what we did and got a slight discount. So just compare. 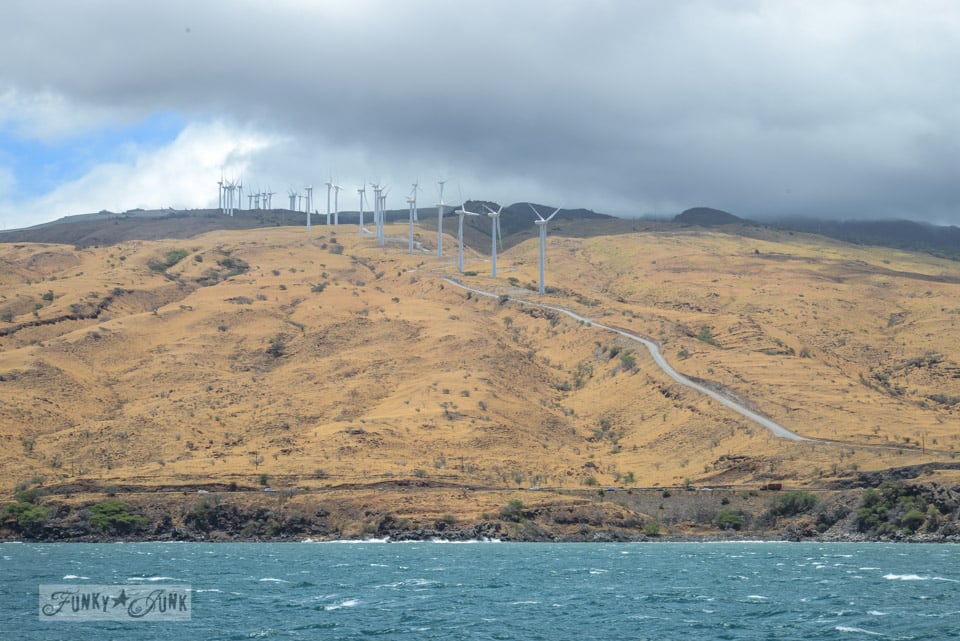 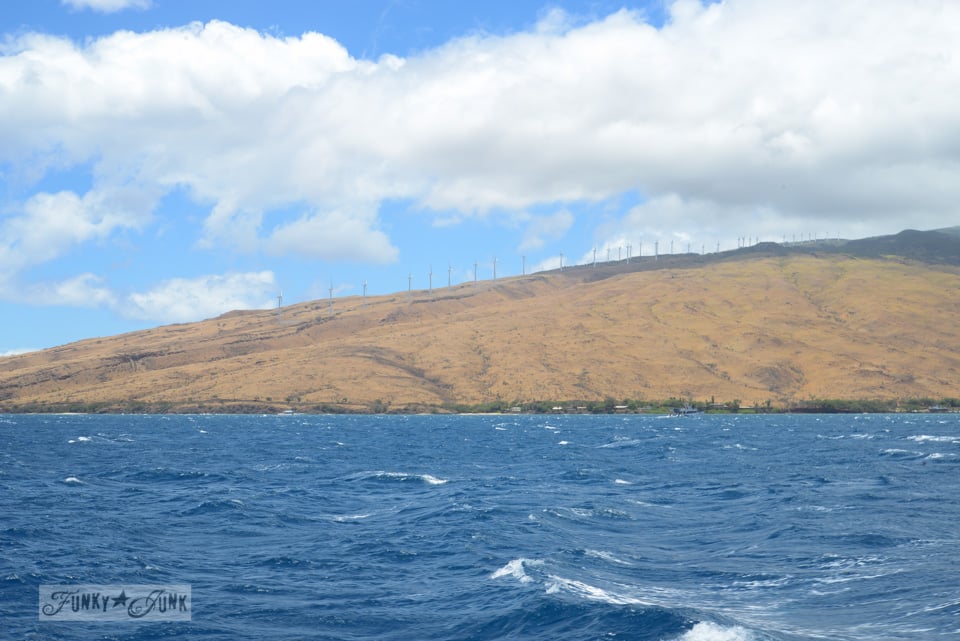 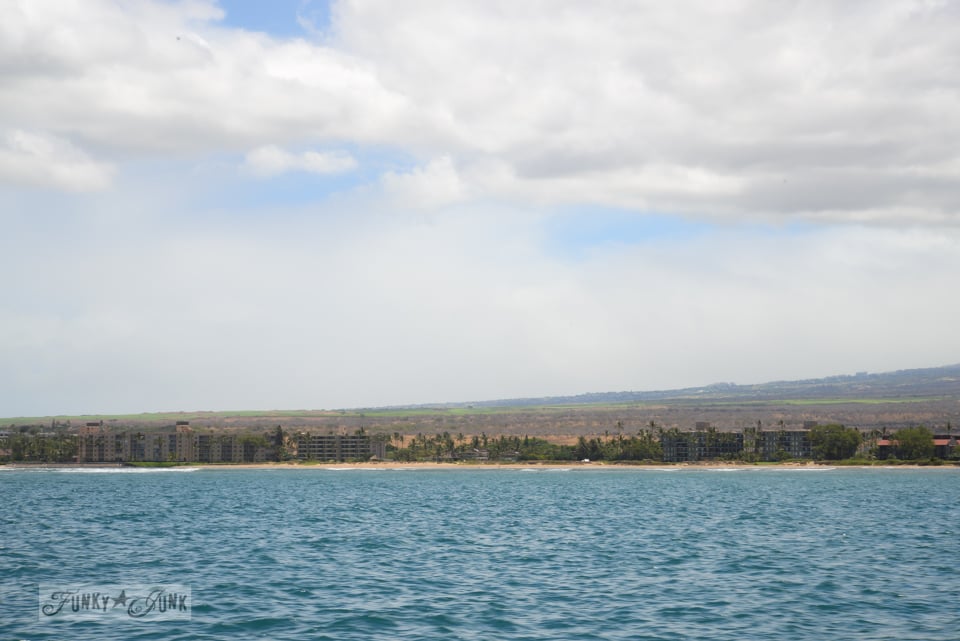 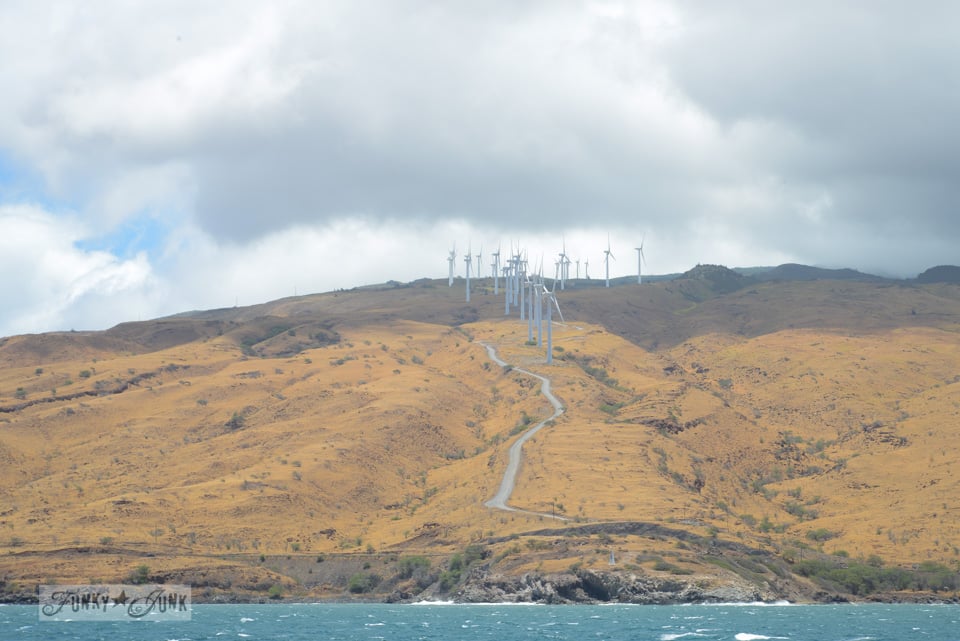 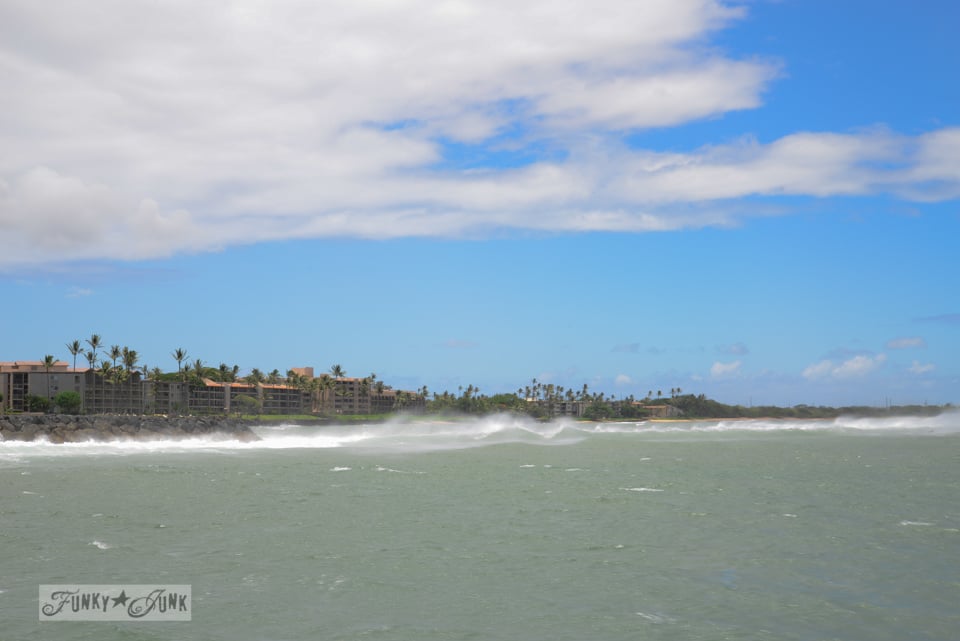 And because we chose a sail charter, they took a little shoreline cruise, caught the wind just so, cut the motor and let the sails do their thing. It was kind of like two excursions in one. Lovely! Neat to see Maui from a slightly different perspective.

Hope you enjoyed this little snorkel / snuba / sailboat adventure! I’d do anything to throw on the snorkel gear and hit some aqua blue water whenever I felt the urge.

Did you go snorkelling? What was your fav part about it?