We had just enjoyed the past two days hooking up with friends that knew their way around the city! 9/11 memorial, junk, Grand Central Station… jam packed and so fun!

But our very last day was next… and it turned out to be one of our fav drama filled epic days in the city EVER..

I don’t know what it is about the word ‘Central Park‘, but I needed… nooooo… NEEEEEEDED to be in this place.

Before going to NYC, I use to google searched it, then select images to just stare…

Our stay nearly didn’t allow time for this one. It was kinda 9/11 (my son’s deal) or the park (my deal). I was willing to give up my dream, but I will admit, I white knuckled the phone while making the call to reserve the Statue of Liberty boat tour as it was by the 9/11.

And then as luck would have it, Miriam took us to the 9/11 (that’s a big fat CHECK, son!) and we had our last day, Monday, all to our park lovin’ selves.

I happily bypassed the statue tour if I could have my park!

And weather wise, it was the nicest day in the city thus far. How did that happen? 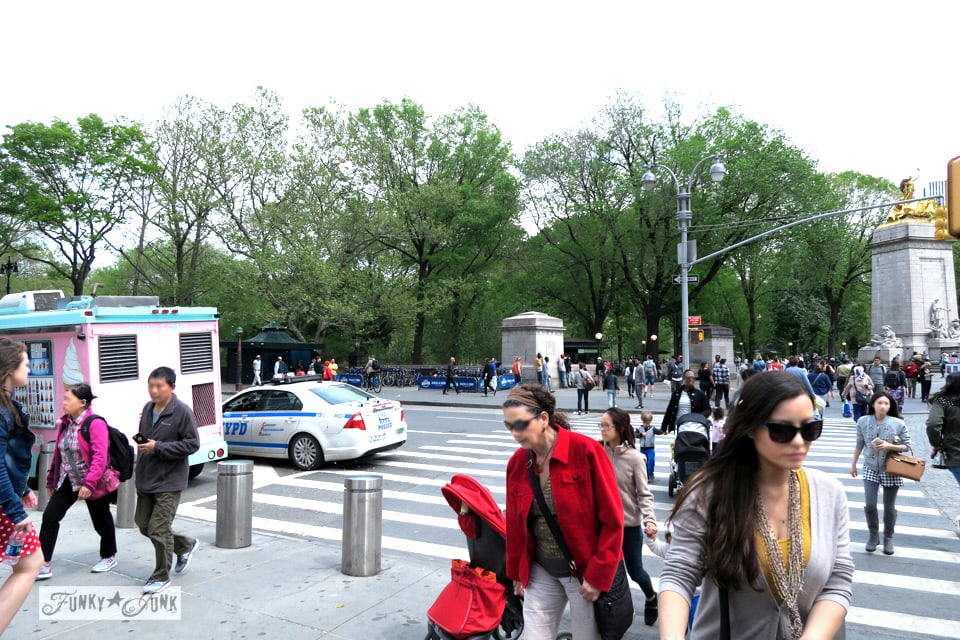 If you were to have seen me, you’d think the park was some movie star I had been in love with my entire life. I was THAT excited to see those trees, upon coming up from yet another hole in the (subway) ground. 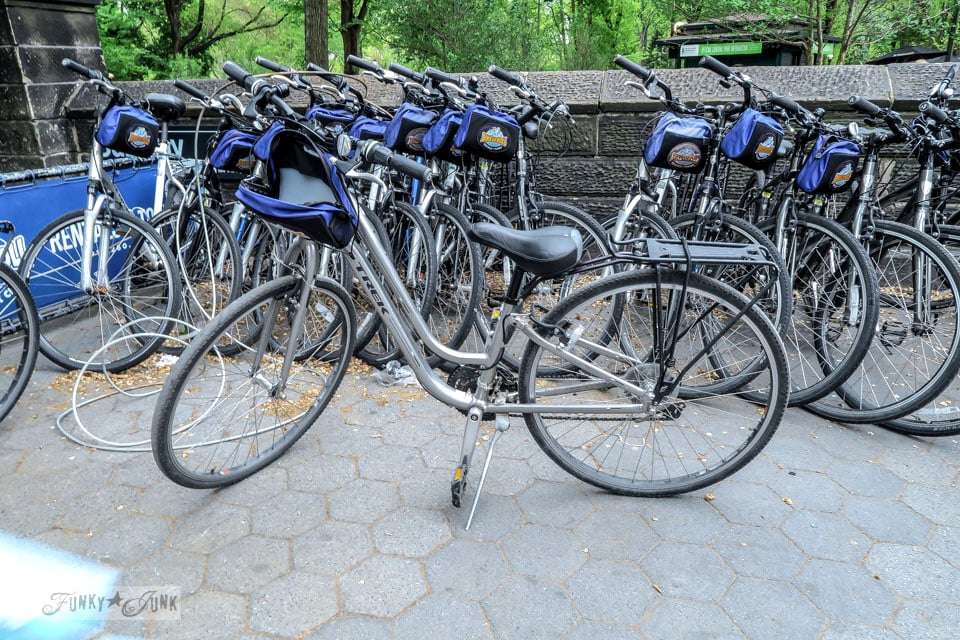 And then there they were.

So we grabbed a couple, and started the somewhat longish walking trek along the trails until we hit the park road. 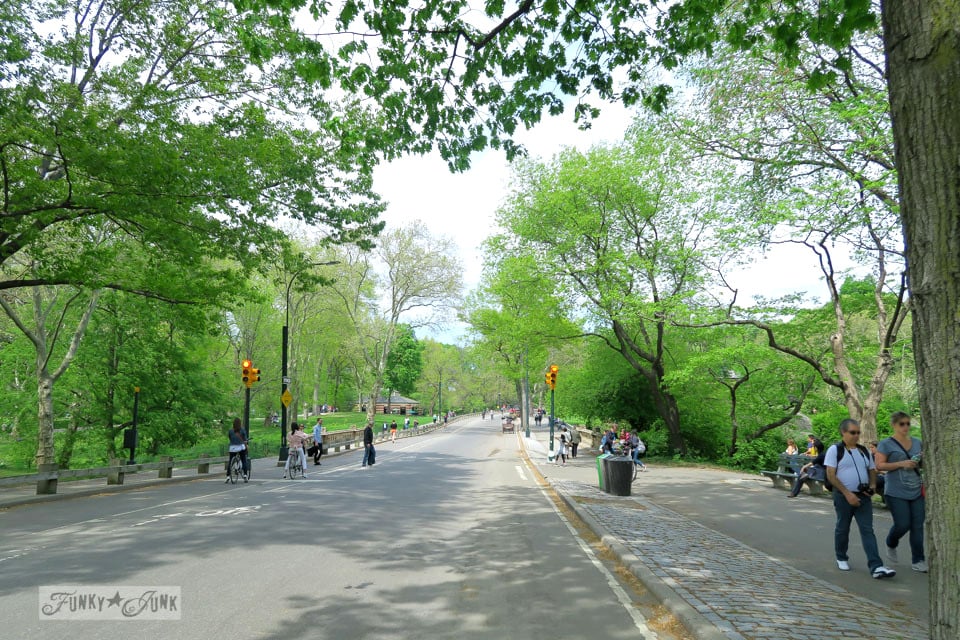 This is a park road. This road wound around the ENTIRE park. GIDDY wasn’t even close…

We hopped on those bikes, and started to ride… until… what in blazes… ?!?!? 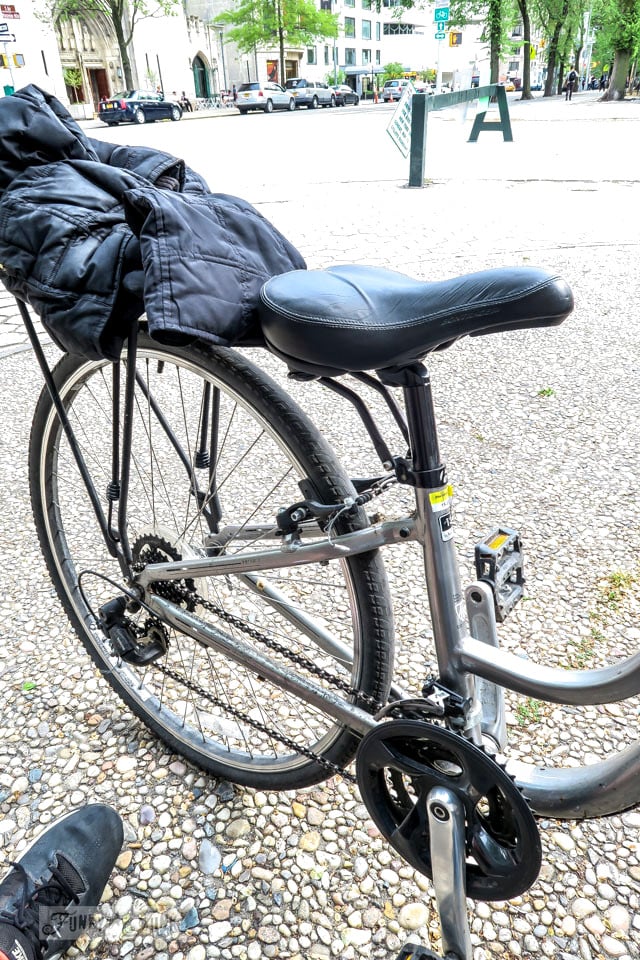 Did you notice anything slightly amiss in that first bike picture? Scroll back one more time.

For the sharp shooters in the crowd, the seat was…. short.

So I dismounted the bike, trying to figure out how to raise the thing. The adjustment device was broken off, so I was stuck.

For 2 seconds, I thought of returning the bike for another, but figured… meh… whatever! I’m sure it’ll be just fine.

It was such a long walk back after all. 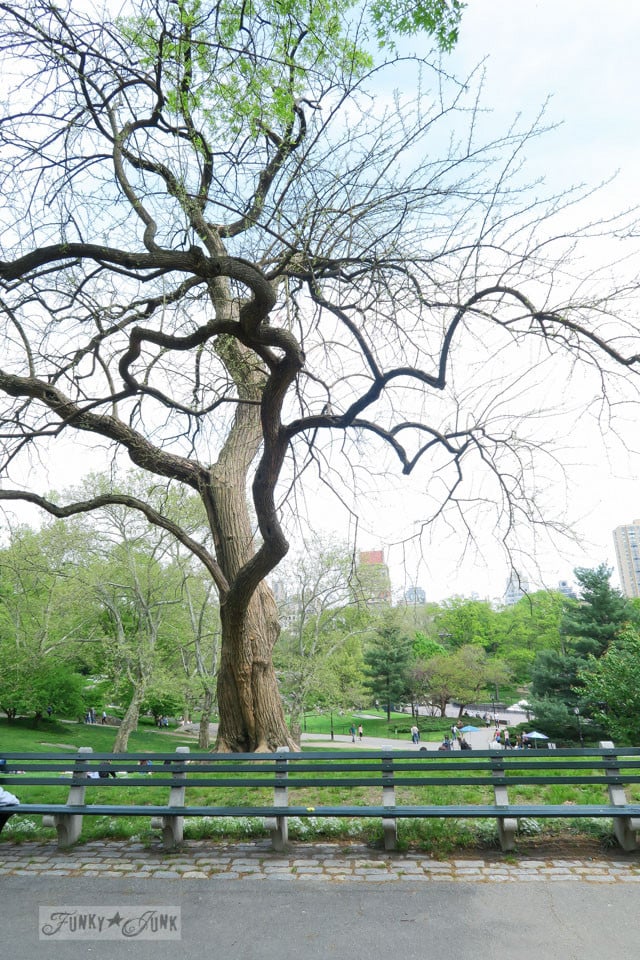 This park was even MORE than I dreamed about. There were vast areas, those with rolling hills, quaint bridges, and some attractions. And the bridges…. swoon! 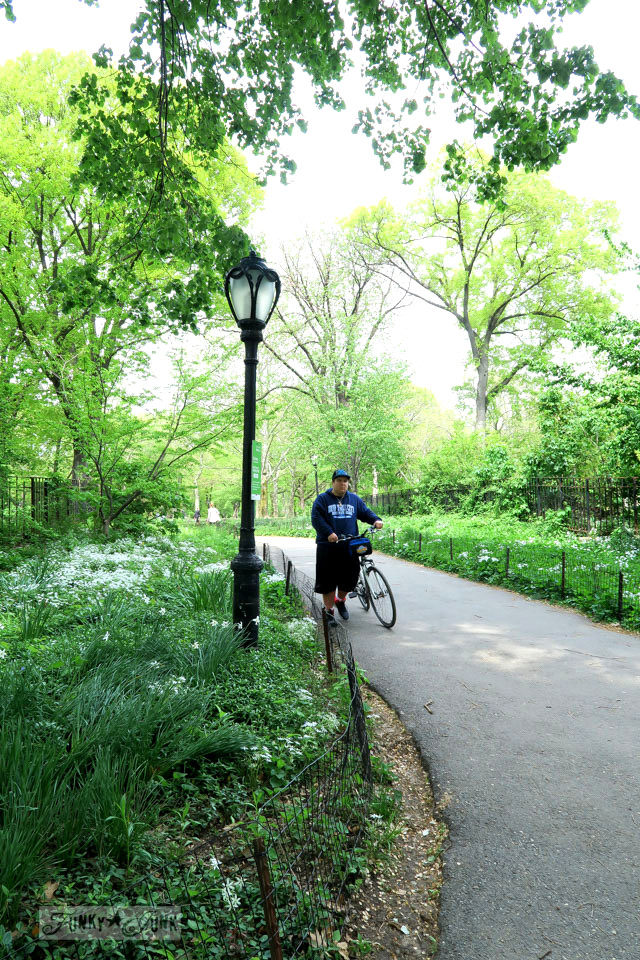 There were so many side shooting pathways were you could only walk, which was cool! I wouldn’t have wanted to wander in these areas any other way. It would have been too fast. 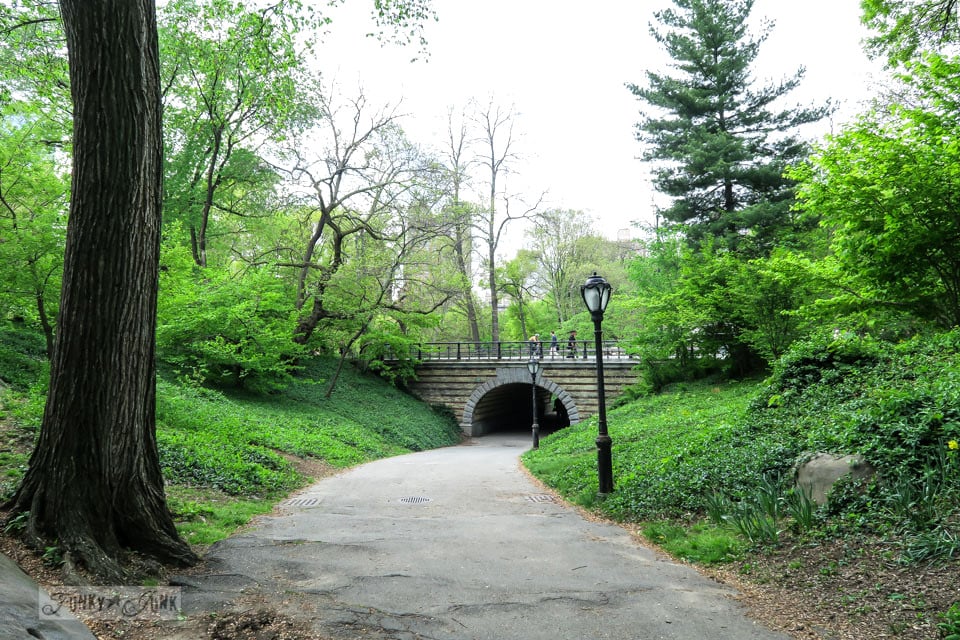 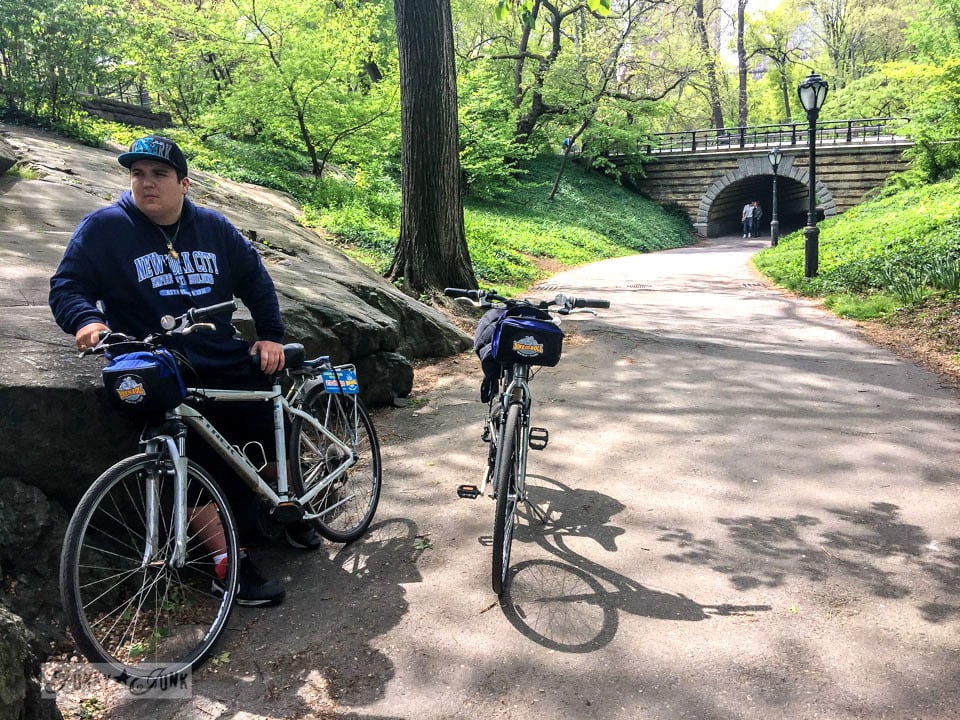 Ohhhh goodness! I can’t believe we were ever even here! Every single turn you made was picture taking perfect! 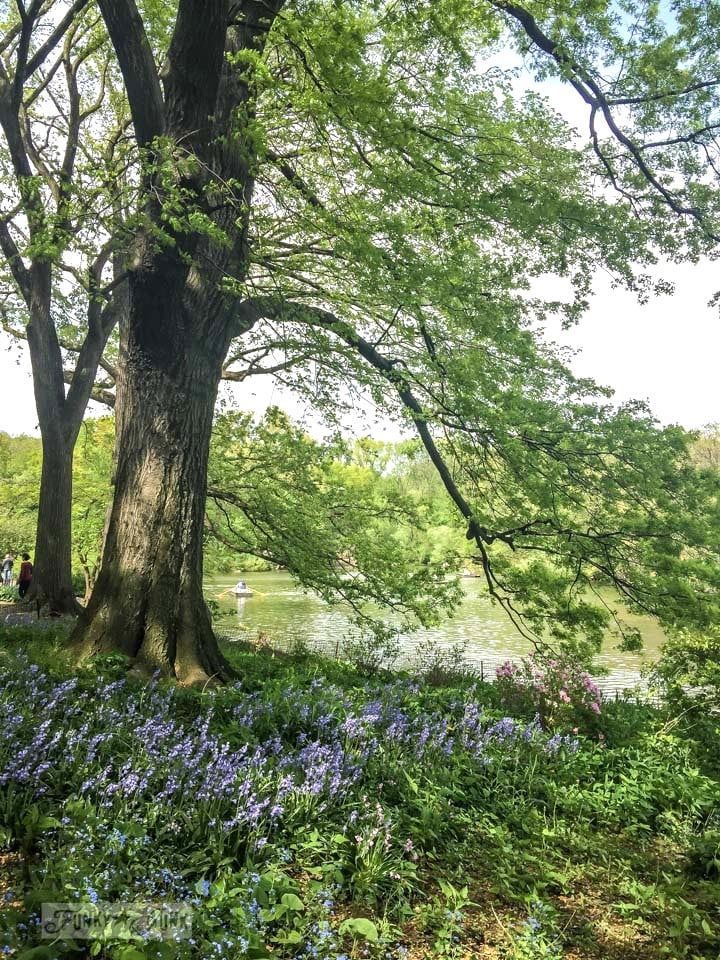 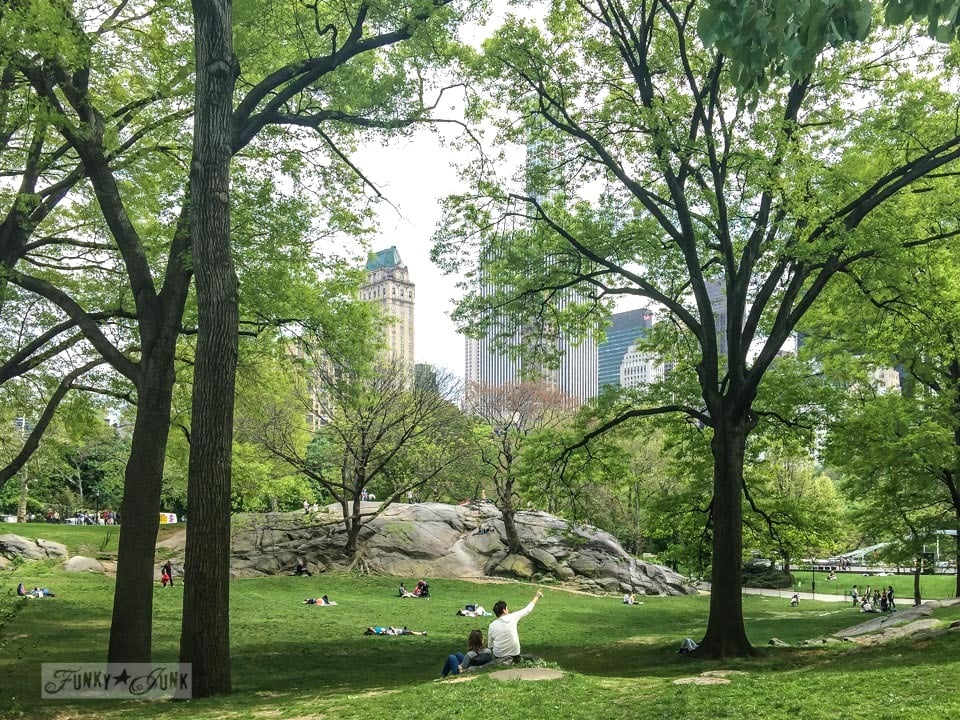 And then we hit a hill. It was small, but I noticed pretty quick my speed was diminishing fast.

I tried to stand up and ride, but that was a loss too. Drat! So I dismounted the bike and walked up the hill… surely there wouldn’t be many hills anyway, right?? 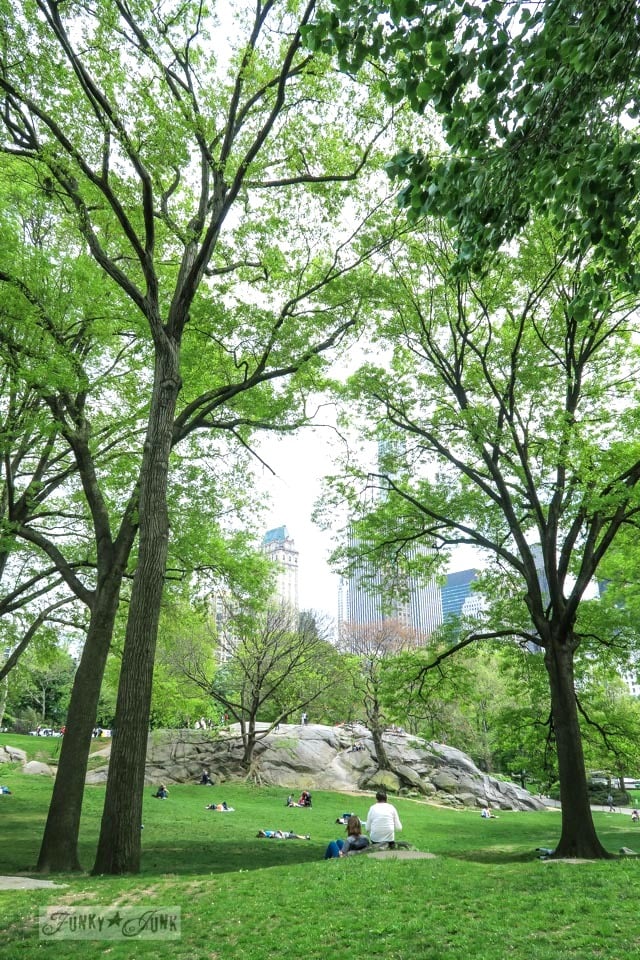 Once we hit the other side of the hill, all systems were a go! I hopped back on and we enjoyed the warm breeze among all the gorgeous trees, standing against tall stunning building backdrops.

But… another hill? Hmm… 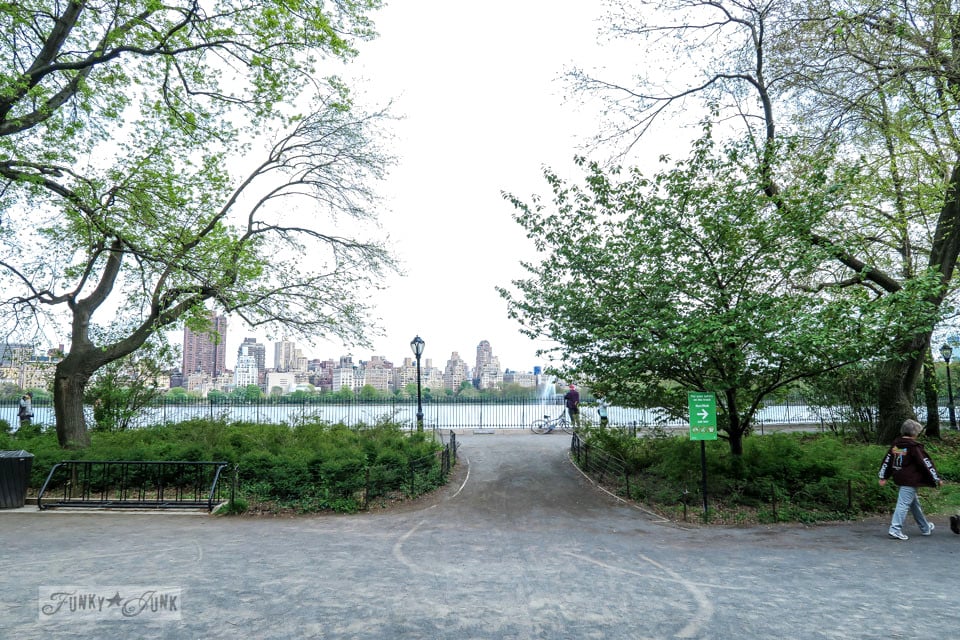 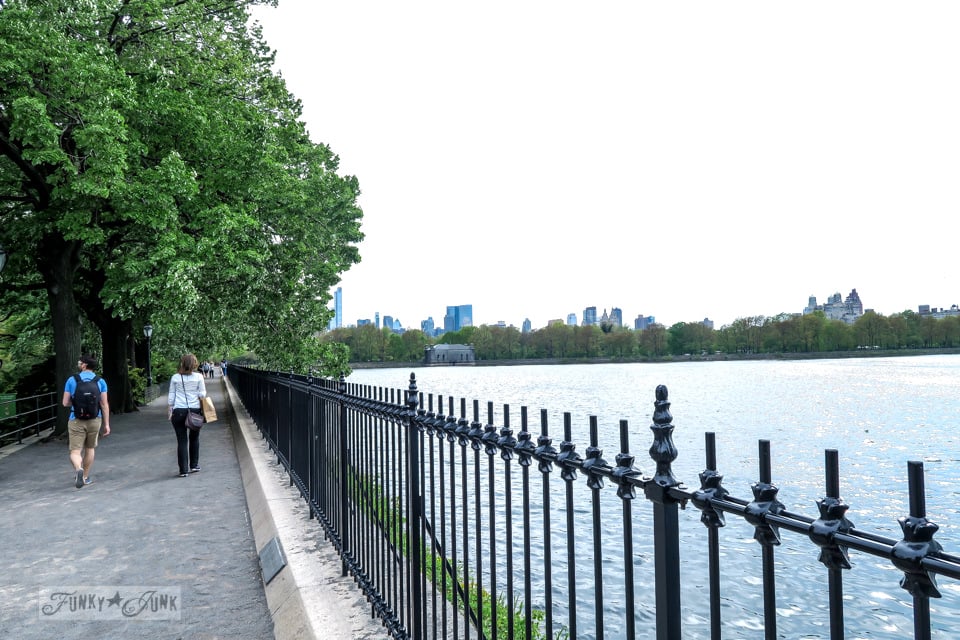 So pretty! And as luck would have it, we were near a gated entry into the park… 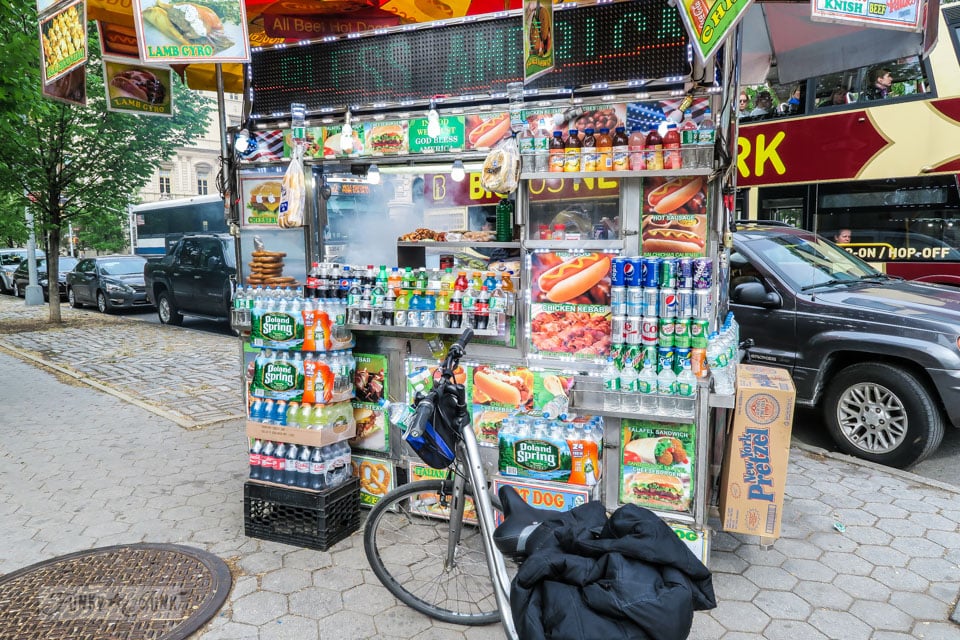 So we sat for a spell, with food ordered from the food truck.

Then something rather comical happened. As we sat on the bench minding our own biz, an irate customer got mad at the vendor for the high priced water his friend just chose to buy.

The friend said nothing. But the arguer had lots to say. At one point, the customer and the vendor operator started yelling at each other, and while I watched on like a shocked deer in headlights, my son was quietly cracking up.

Who knew water could be such a hot topic?

After the guy left, I got up and bought one to make the vendor operator feel better.

Plus, I was feeling I’d need it anyway… more knee knockin’ hills to come I’m sure.

Well, the park ended up getting prettier and prettier. 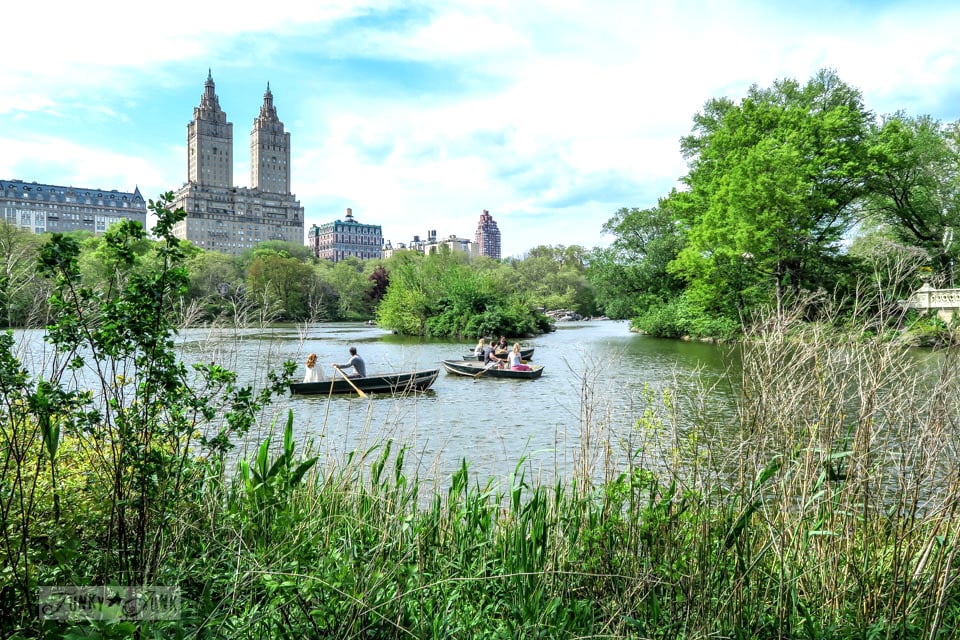 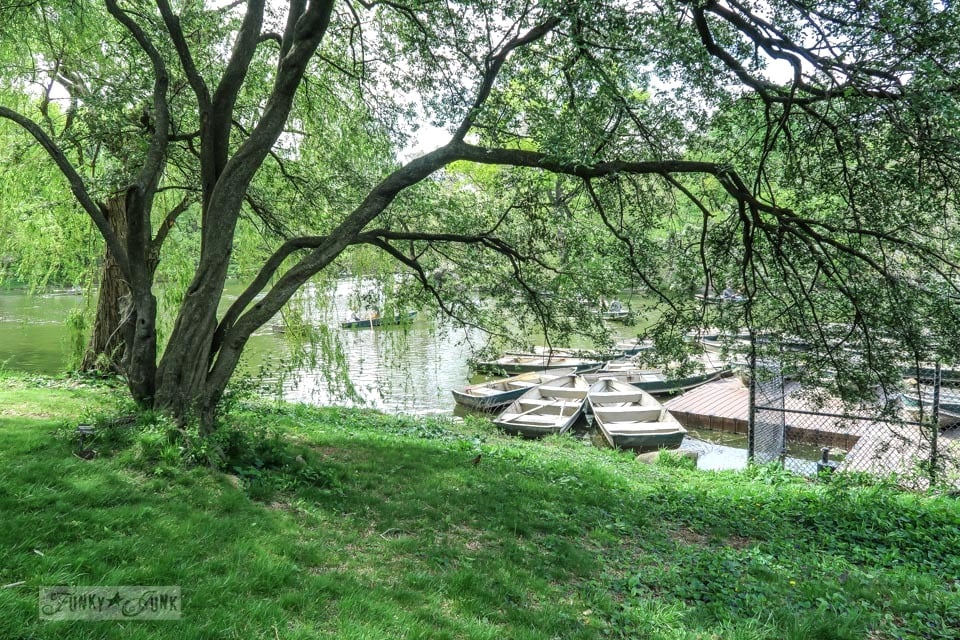 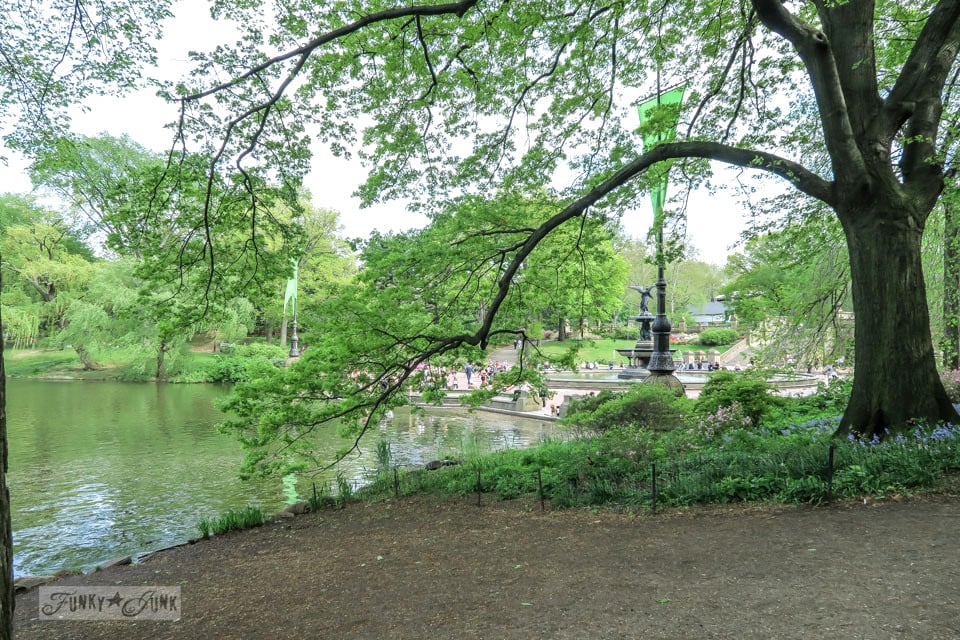 And then I found it. IT! My beloved Bow Bridge I had been dreaming about for so long!

You needed to walk down a few paths to find it… and I’m so glad we had stopped where we did, otherwise we would have missed it! 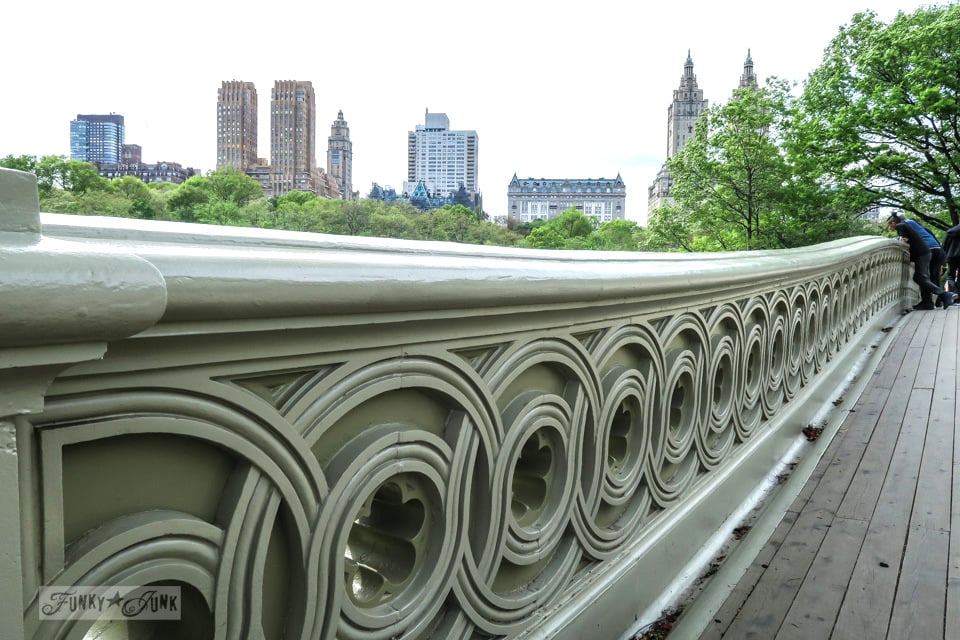 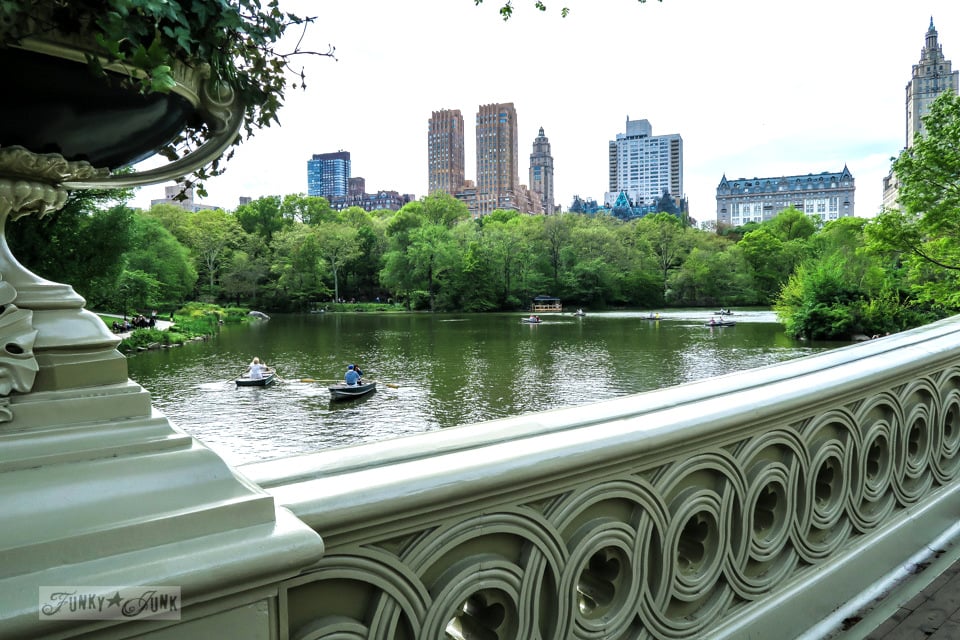 SO in love! We bought a couple of ice creams, and people watched.

This is where I started to wonder if we were taking too long… bikes rented out by the hour. But whatever… THIS is the one thing I had to do, so I resolved to quit thinking about it, and just enjoy.

We eventually hopped on the bikes again, when things got really tough. It was like the road turned into some kind of uphill race track. There was absolutely NO WAY I could pedal that bike.

I anxiously looked around for any pro looking bike riders, hoping I could spot someone with tools so I could adjust the seat. I asked a few, but came up empty handed.

Desperate, I decided to try and call the bike place and see if they could bring me one… because by the looks of the map, we weren’t even half way done and this bike was going NO WHERE.

No one answered the phone.

So… with one (many) big sigh(s), I took my midget bike for a walk. A very LOOONNNNGGGG walk.

At one point, my son was curious why it was so hard for me, so we switched bikes. I could suddenly FLY! But he? Complete standstill.

The hills were so long, I honestly at that point just wanted to cry. 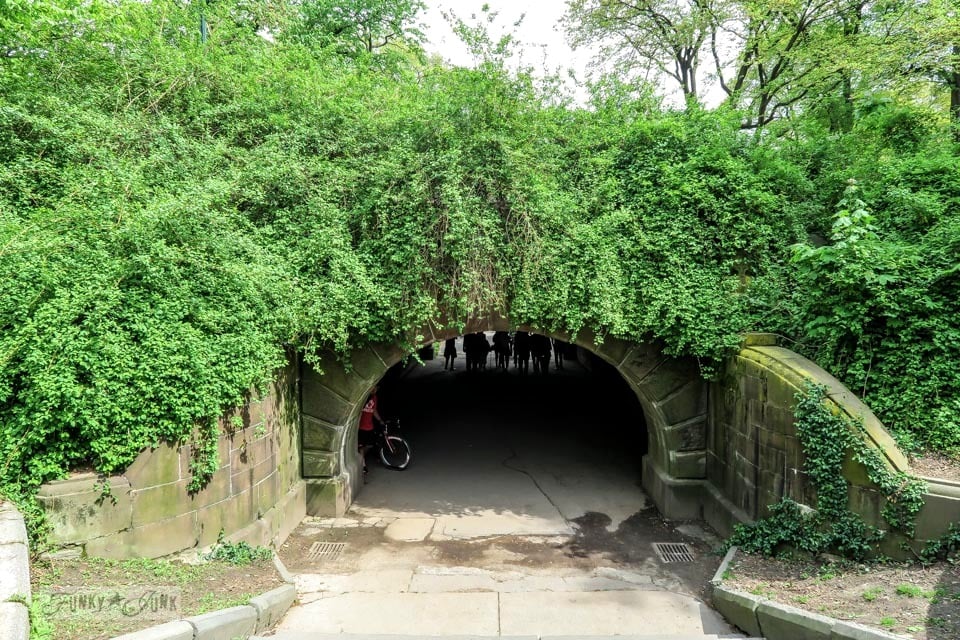 And that’s when I summoned some work truck. BEGGING for either a ride or tools (he said no to both), he told me that he did have some good news though… for just around the next bend, it was pretty much all downhill from there.

I nearly kissed him. Or maybe I even did. I don’t remember. I just remember pushing that bike with all my mightless might until the downhill began.

At this point, I didn’t DARE get off any more side trails. I needed to take advantage of going down as fast as I could. 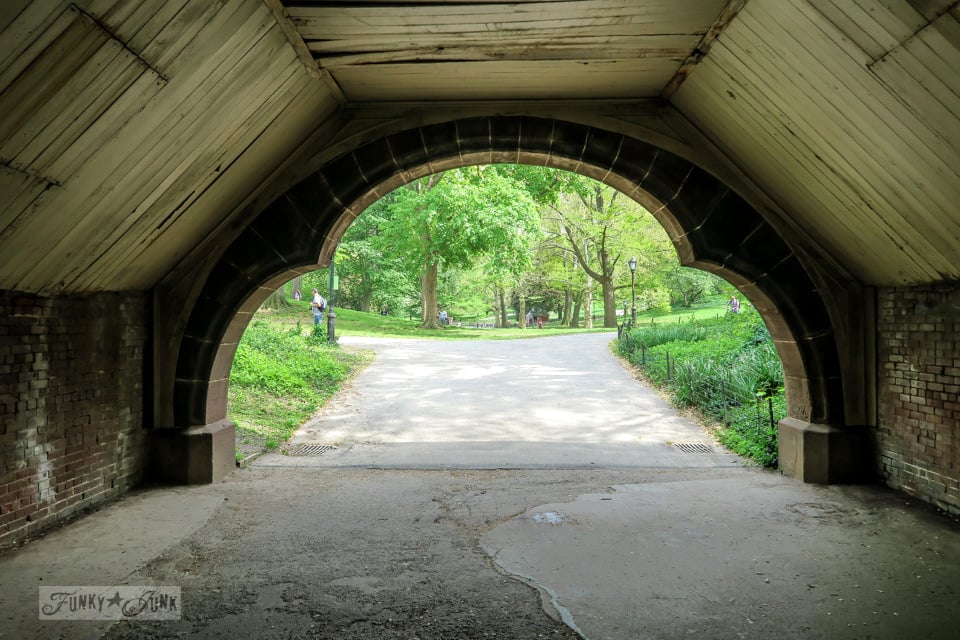 And downhill we flew!

Honestly? It was soooooo fabulous!

Imagine whizzing by the most gorgeous scenery possible. It felt like we were biking through a painting.

I will never forget the feeling. 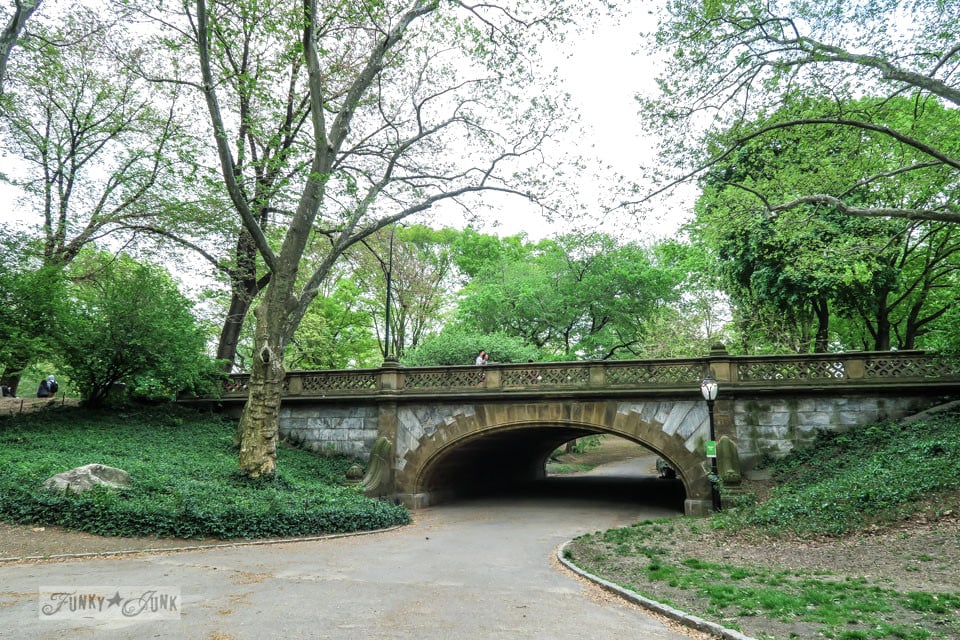 By the time we got back to the bike place, it was edging to half a day. Egads… if you bike the entire park, it takes about 2 hours.

And that’s when I had a little chit chat with the bike man. He felt so bad about the error, he only billed us BOTH for 1 hour total.

That was a super nice break for sure!

But you know what my son said as soon as we got off our bikes? 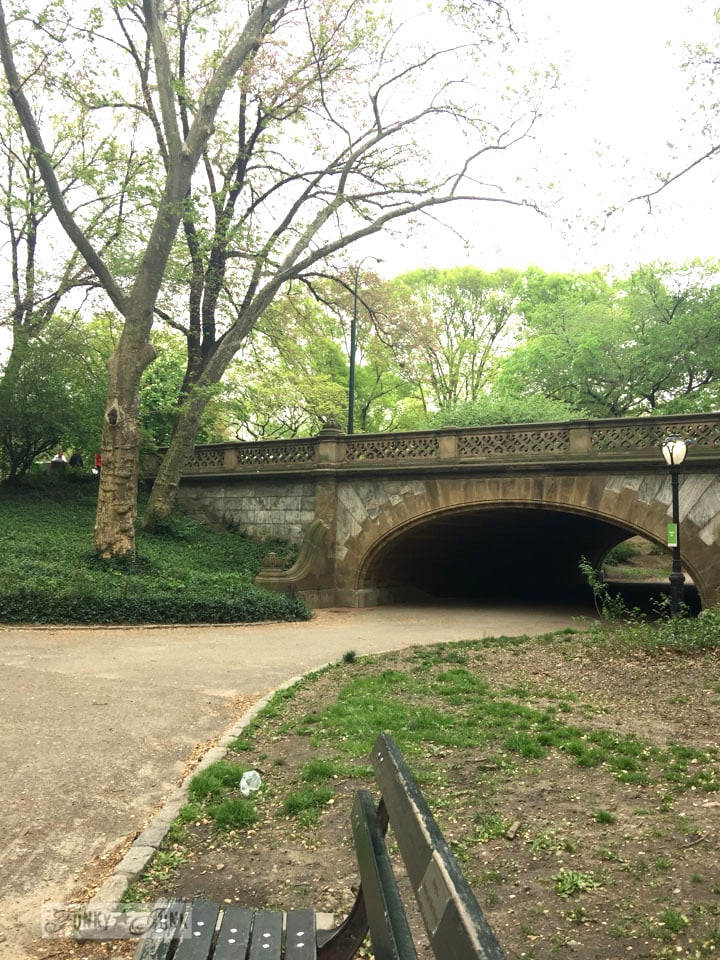 “Can we come back to NYC next year?”

“I want to go downhill again!”

Music to my ears, boy… and I completely agreed with him. This is the very first thing we’d do if we ever returned. Except next round, on a non midget variety, so we could afford to walk a few more trails.

As we exited the park, I didn’t want to rush. Ok, make that, couldn’t rush. It was like all the wind was completely knocked out of me. MY brain was too numb to put together two thoughts, never mind actual words.

So we sat near this gorgeous bridge, and just… ok, I mean, other than catching my breath, it was hard to leave. This was MY park… I owned it now. And if my legs hadn’t been complete rubber, I’d have biked it all over again that very day. We loved it just that much! 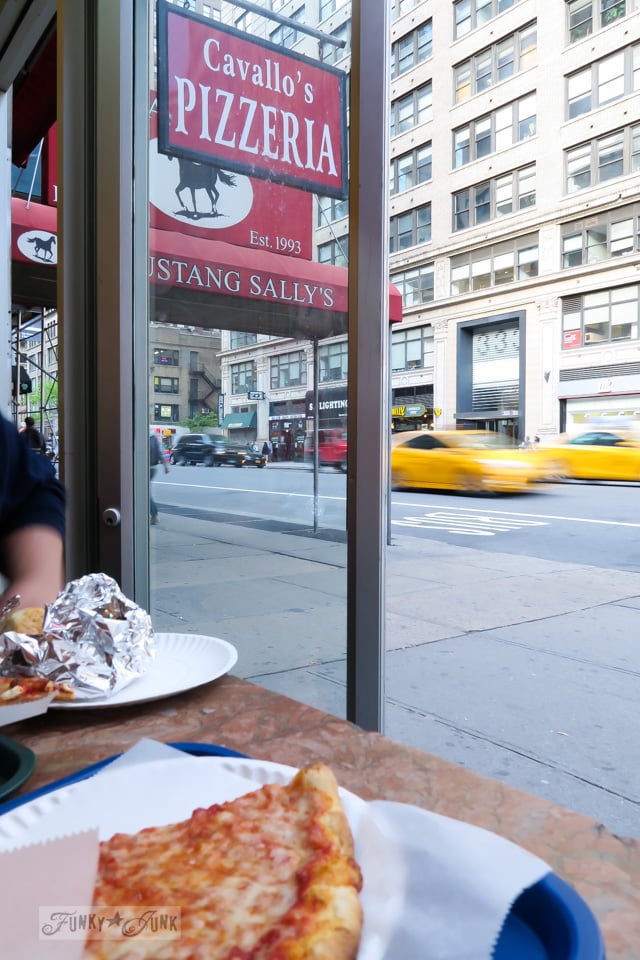 After flying back on our very last subway ride, (we were pros now!), we decided that NYC pizza was a MUST on our last day.

We found the perfect place too. The glass doors were wide open, so eating here felt like eating on the street. That is the way to have pizza in NY! 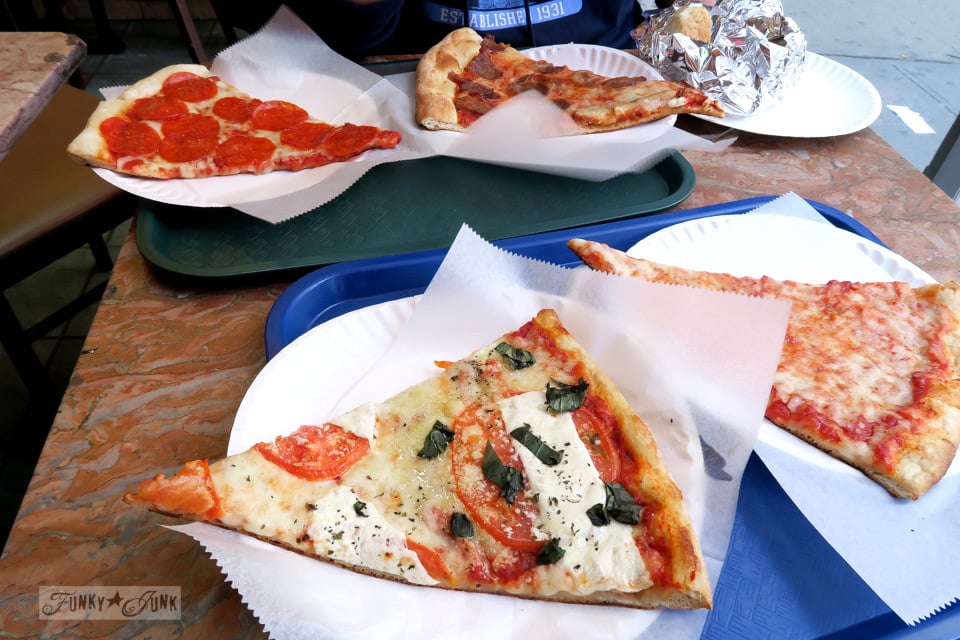 So so so so so delicious! It hurts my heart to see these pics.

After resting up a bit in our room, we started pacing the streets, just to take in one last round of the fabulous night glow.

And it was on one side street, that I spun around and gasped…. 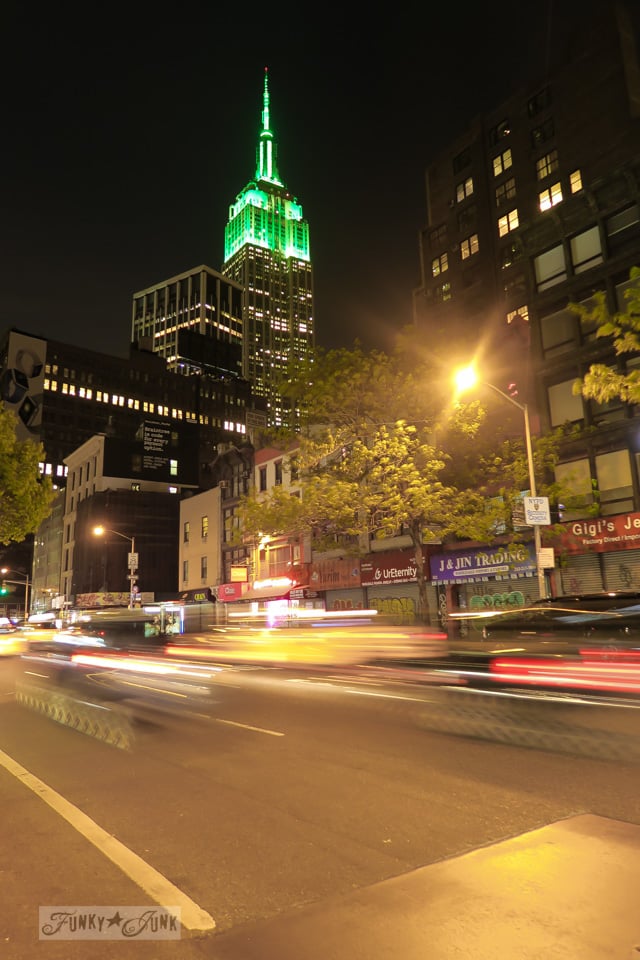 How did I not notice that majestic lit up Empire State Building right there this entire time? 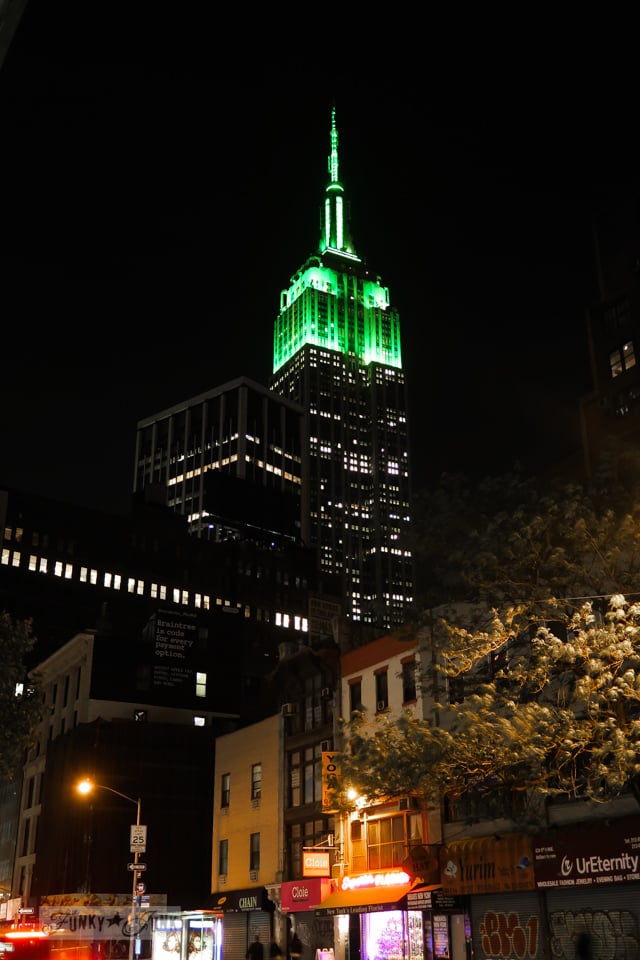 Seriously, this trip was probably one of the most unique we’ve ever been on. Some of it was not what I expected, yet some spots, even better than I could have dreamed of.

But bar none, one of OUR fav things was spending an entire day at Central Park. Just do it! I guess you just can’t take the country out of a farmer’s daughter and her son…

If we ever go back, I’d love to take in the Brooklyn Flea Market (because we’re subway pros now), and the Brooklyn Bridge… and visit brownstones in Brooklyn. I think Brooklyn is a tad on my sights… ya think?! And getting out of the city to see Susan at Long Island would be super cool!

But in all, a week felt right to spend in this fab city! We were ready to come home. (and stop walking…)

Well friends, thanks for joining me for our exciting adventure to NYC, journal style! It made for a slightly unique delivery, but I just had to express everything we felt and did this round. I shot some video too, so if I ever get around to it, I may do a movie / slideshow feature at some point for You Tube. I’ll be sure to add it to the lineup here if it ever becomes ‘a thing’.

Now where are those travel people that just want to send you places so you’ll write about it? My number is…

You can catch up on ALL INSTALMENTS HERE, or:

Here’s a short video on seeing the hot spots of NYC within 4 minutes!