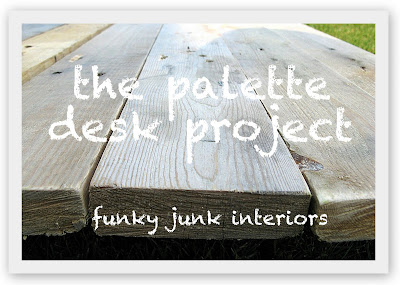 (all parts to date here)

Part 3 – preparing the materials and design 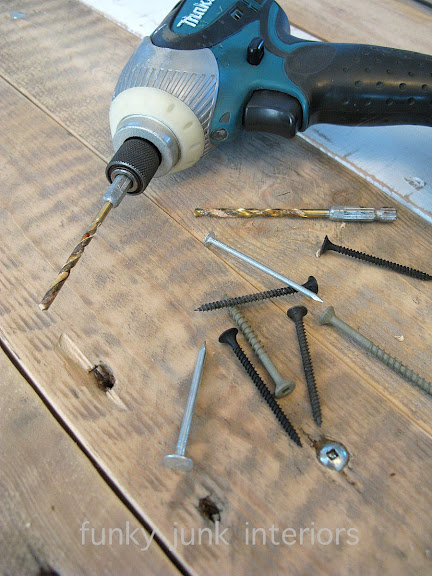 I received an email from my artist friend Dan. He thought the table was cool, but enticed me to use random screws for attaching the palette boards to the ladder.

I thought of hiding the screws, gluing the boards, all kinds of options that were discussed with the Facebook crew. (thanks all!) And in the end, I resorted to not only the easy way, but the funkier way. Dan was right. Let’s go to town! And that’s when I dropped the perfectionism and hit the hardware store, bought a handful of this and that, and went crazy.

Remember the nail holes from when I pulled the nails out? I even put ‘pretend’ working nails and screws into them for added bling. 🙂

Tip: predrilling the holes created a much cleaner look, otherwise the wood tended to splinter abit 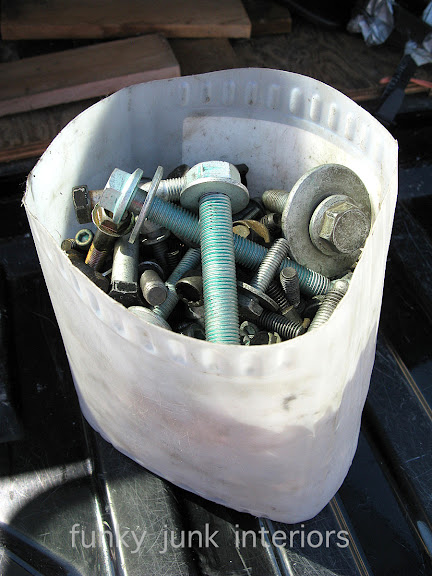 I had another windfall in the past week. I had been wishing I had all kinds of crazy giant bots and washers on hand so I could decorate the desk top even more. And this bucket is what I found at my fav palette shopping mall the very next day! Oy… I giggled the rest of the way home. 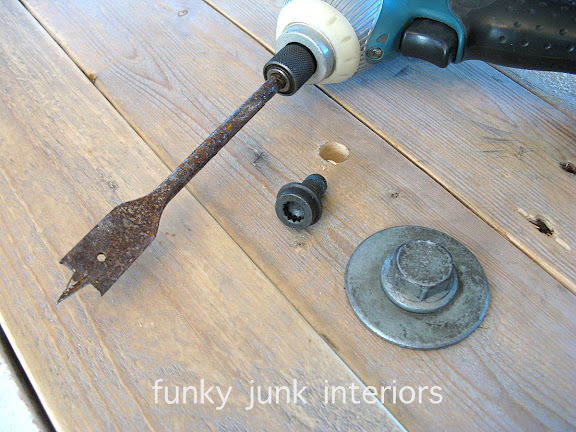 See?!? Tell me this isn’t cool! Right then, I knew what I needed this desk top to look like. So I started drilling random holes slightly bigger than the screws, and simply dropped them in place. 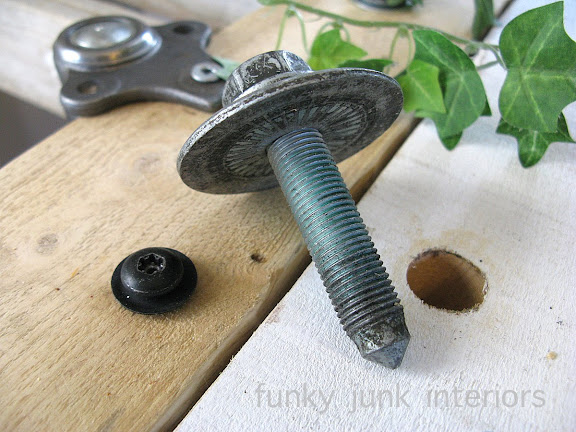 And found other weird stuff in the bucket like that thing on the left. No idea what it is but it’s staying! In case you’re curious… I installed all the fancy stuff away from work zones and legs so they won’t be in the way. And if they are, I can just pull them out for the timebeing.

Next up was deciding how to decorate the boards via paint. The bolts, rustic boards and random screws just told me to leave the look as random planks nailed together. They resembled railway ties in a round about way, hence, the logo. 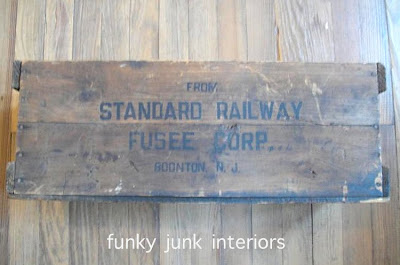 I was mildly inspired by this crate I found on the net, but wanted more colour than shown here. So I revamped the design to suit. 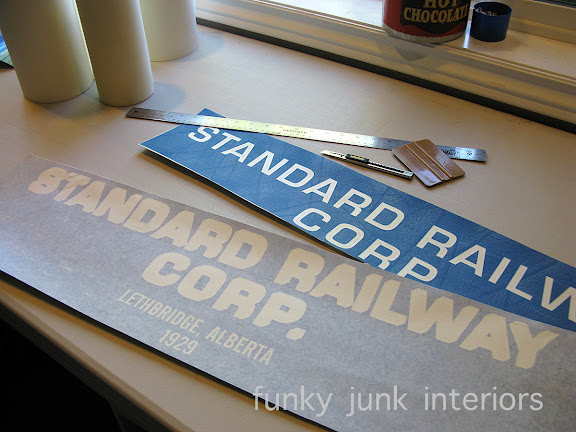 The black went on first, then after it was dry (nearly), I applied another layer with white.

FYI: I own pro signmaking equipment for my day job – CorelDraw, Signlab, and a 20″ vinyl cutter and simply used old vinyl on hand 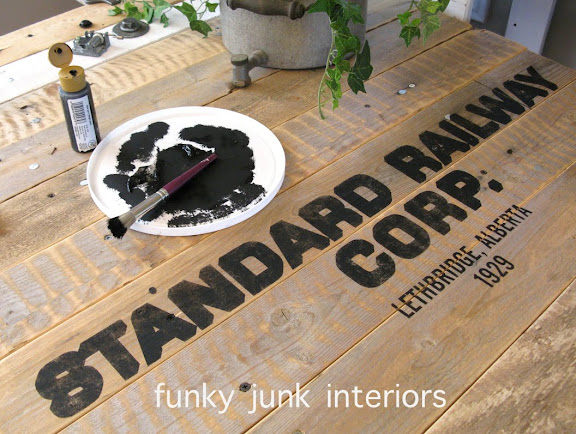 Simple acrylic craft paint was all that was used. And I used a stipple motion for application so it left a mottled appearance from the get go. 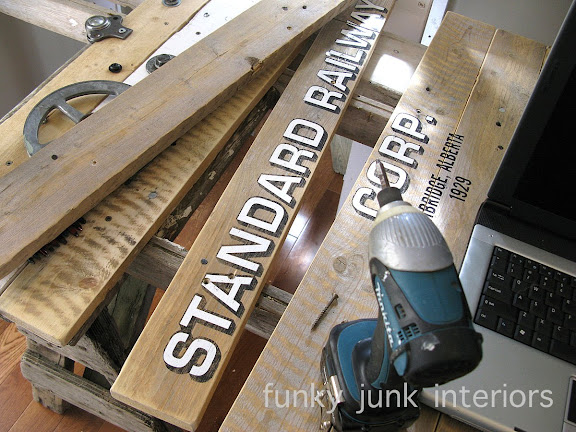 Once I stenciled the design on the boards, I changed my mind on placement. Doh!!! After mild panic subsided, I simply unscrewed the boards and moved them where I desired. Now THAT was a brilliant move those screws were… 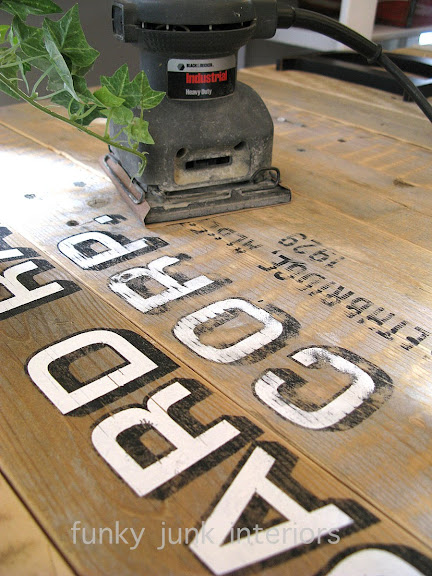 I then distressed the paint with a palm sander, proving to be effortless compared to doing it by hand. And had more fun with paint in other areas. 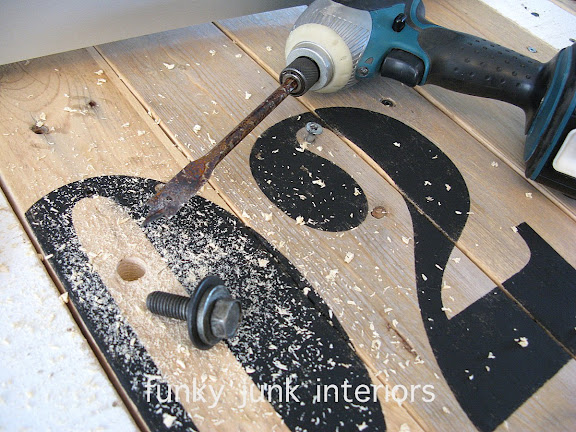 Once all the designwork was painted on, it was easy to see where embellishments would work, so I kept adding and adding.

What? The boy’s hungry? Yeah, I got him to cook. I was busy workin’ after all! 🙂 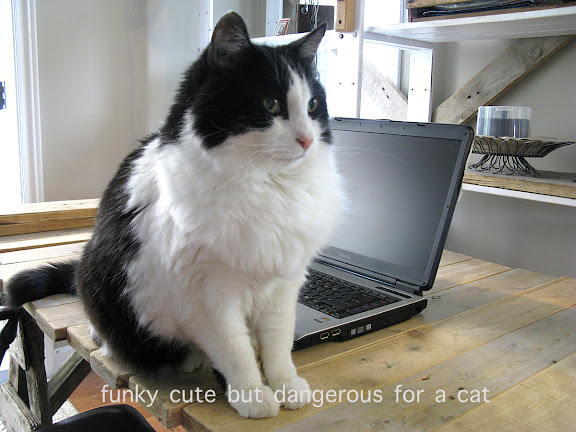 Another detail I had already thought of but Dan also suggested was to not line the board edges up so perfect. He simply confirmed that it was a good idea. Remember the pic of my cat sitting on the  boards here? If you look along the edge, that’s what I did although abit more subtle than what you see. I wanted it slightly random looking without a comical aspect.

Wow. We’re finally down to reveal time! So I have a treat for ya. I’ve also got a Part 6 that will follow right after this post, so be sure to look for it. Not only did I want you to wait any longer, I also wanted to be a part of a blog party on “Where I Blog” so that little deadline really pushed me to get this all done. There is NOTHING like a deadline, folks! 🙂

See ya shortly over at:

Thanks to the Facebookers that offered their helpful opinions during this project!
And they get teases sneak peeks too!