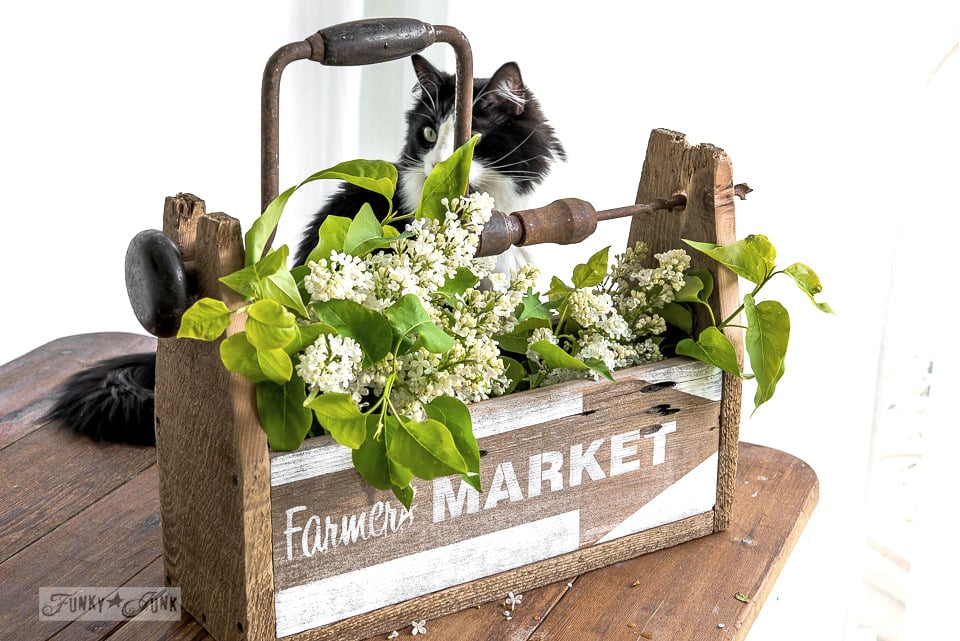 In preparation for The Olde Farmhouse vintage market, I’ve been playing with the old fence wood I collected a while back. Remember the lottery win post HERE?

First I needed to find it a home. So I built a wood cart to go underneath an ugly fold out turned cool farmhouse style table.

And then that wood had to be cleaned. There was so much mould on it, I thought I’d have to throw most of it out. But… not a one needed to go. THIS proved to be the easiest way to clean reclaimed wood!

Then I was left with a pretty sweet cleaned up haul that was itchin’ to become so much more than planks from a falling down fence. 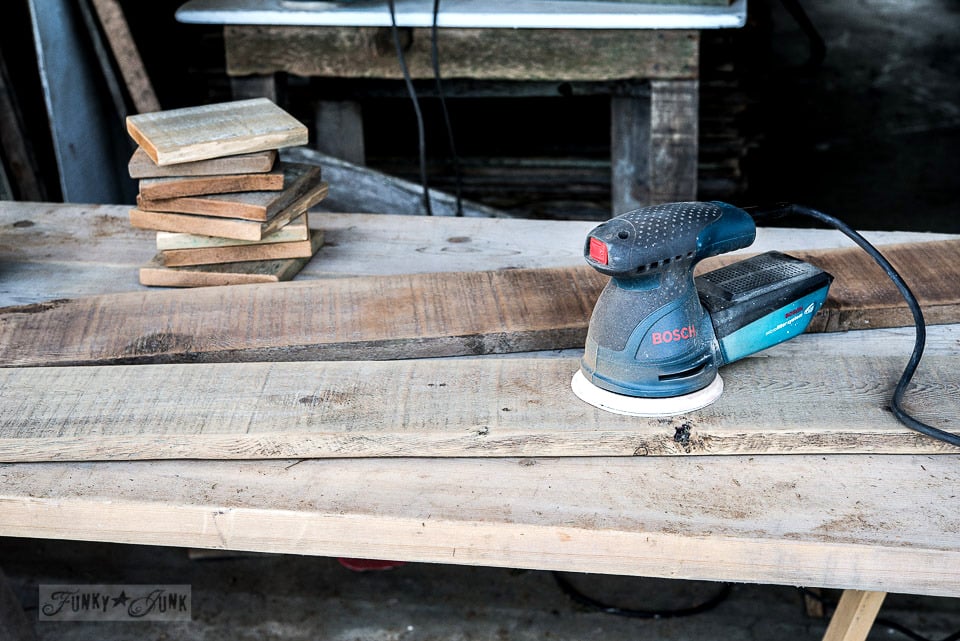 After cleaning, the boards got a super good sanding. Then it was time to play. 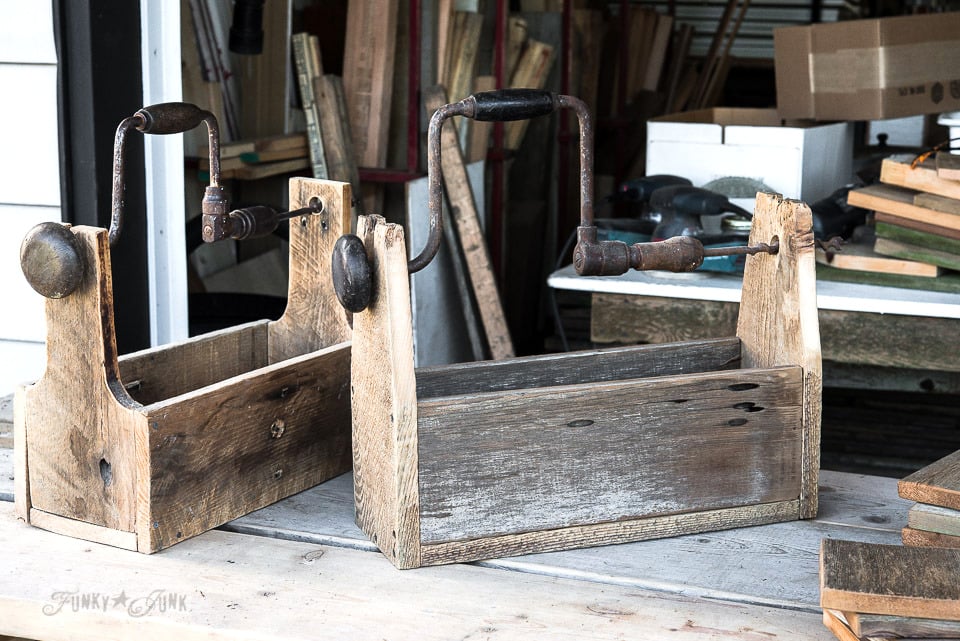 And a reclaimed fence wood drill handled toolbox was the result. The one on the right is new. The one on the left was my first try at it many moons ago, which I used as inspiration for size.

How to build a drill handled toolbox is HERE.

But, let’s look a little closer, because I have a few secrets to share with this new (old?) design. 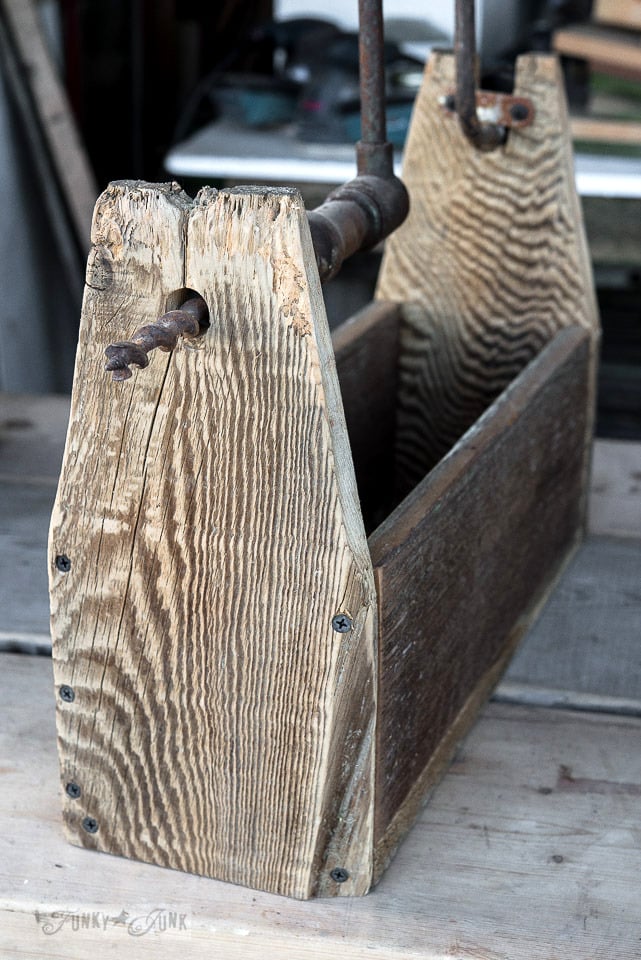 This round, I angled the toolbox sides, but ensured the top edges were left original. 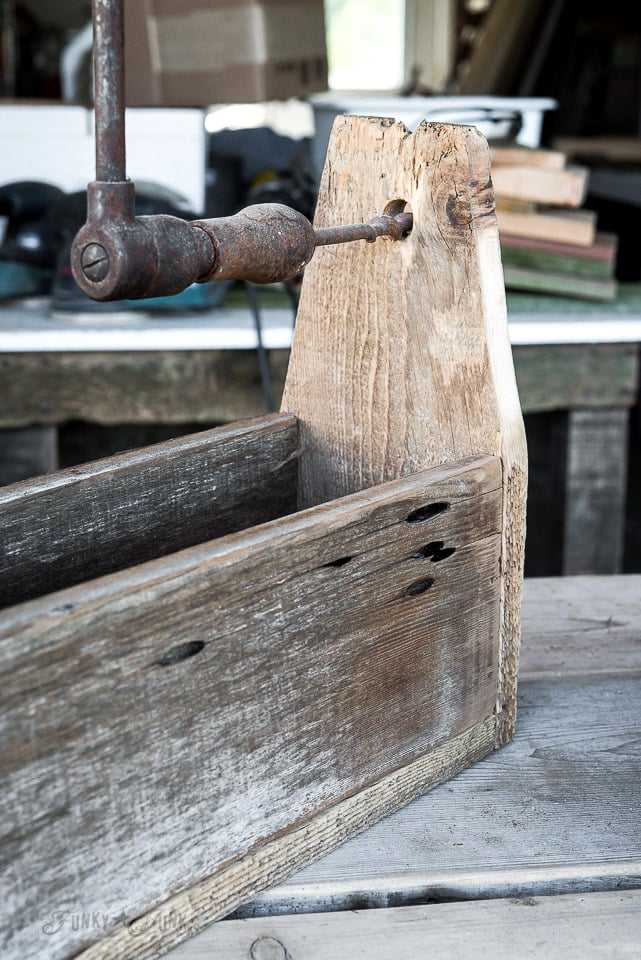 To further celebrate the old wood, imperfections were given centre stage. 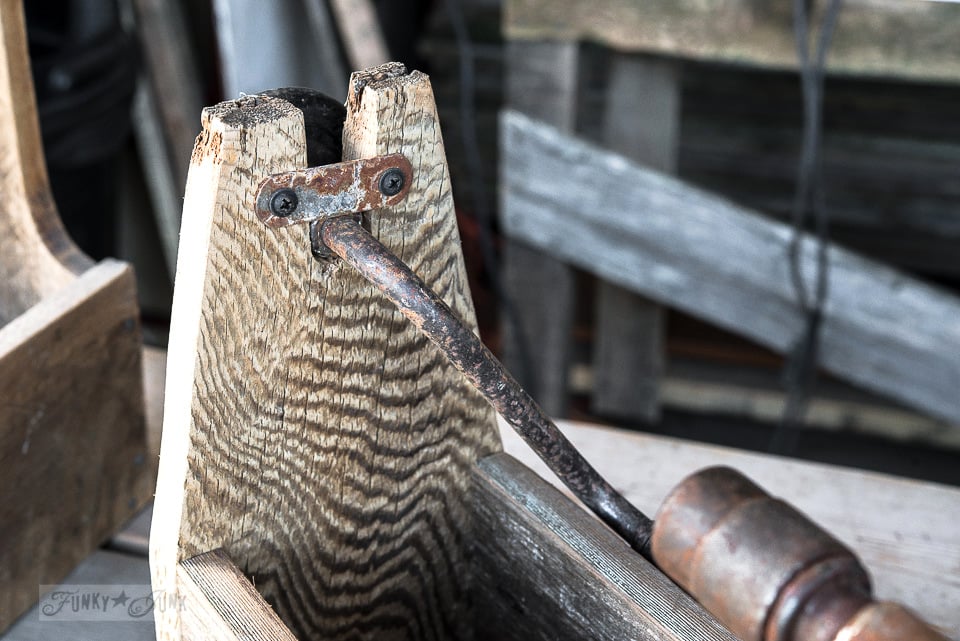 To hold the drill handle in place, a rusty bracket of sorts was screwed right above the handle.

That’s really the trick to something looking authentically old… just use old stuff when you build.

And then… temptation got the better of me. 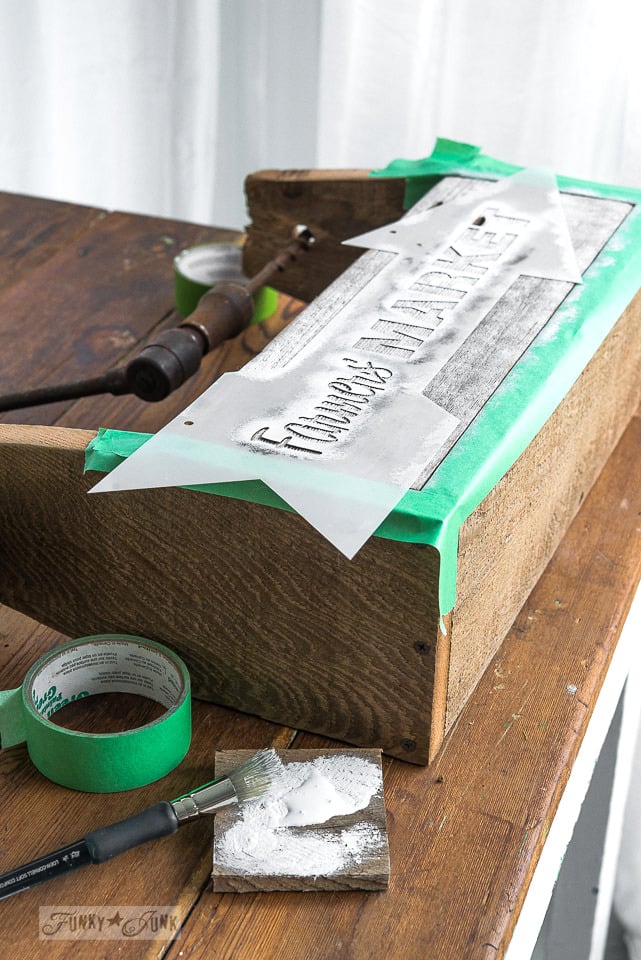 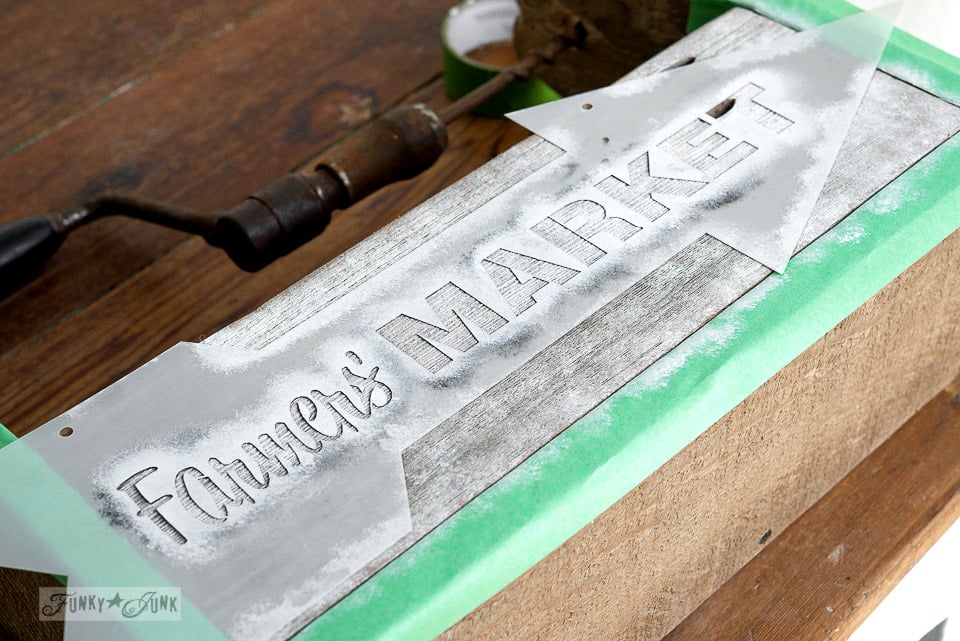 The Farmers’ Market arrow stencil (* small kit is no longer sold, just Farmers’ Market large is avail* ) was used, but with a twist. See where the arrow jogs out wider after Farmers’? I just slid the stencil to the left to fill in that area so the arrow would be straight.

Now… what to do with this thing… 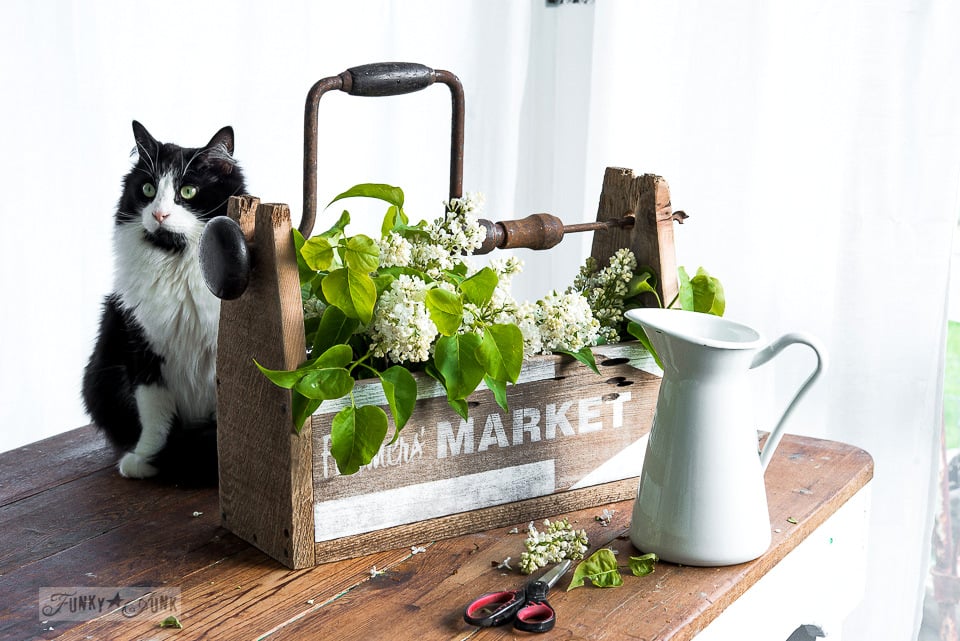 Well, I mean, everything goes better with lilacs and cats!

So yes! The toolbox makes a great rustic vase. Tuck water filled jars inside and just add cut flowers from the yard.

But how about something a little more productive? 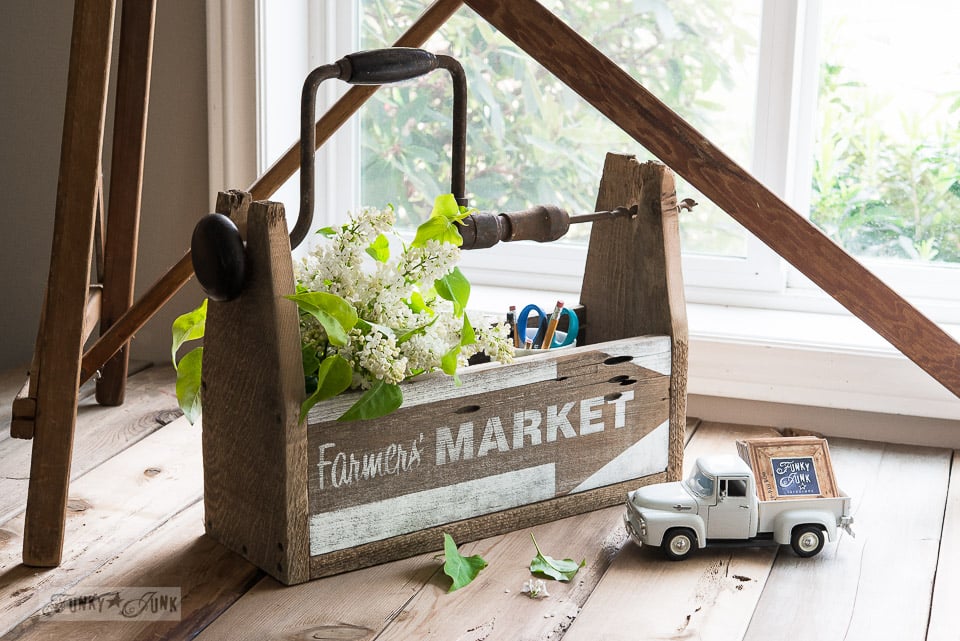 You could store files if you built the box long enough like I did with my shutter toolbox. 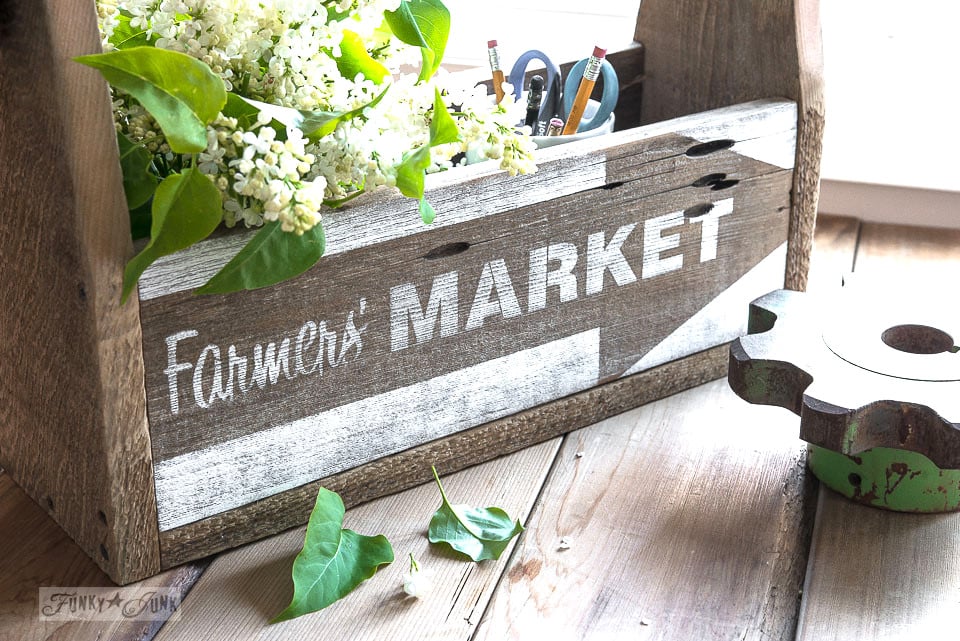 The stencil was intentionally cut off here and there, to resemble the toolbox being made out of a wood sign. The design wasn’t further distressed, to encourage the white to pop as much as possible. 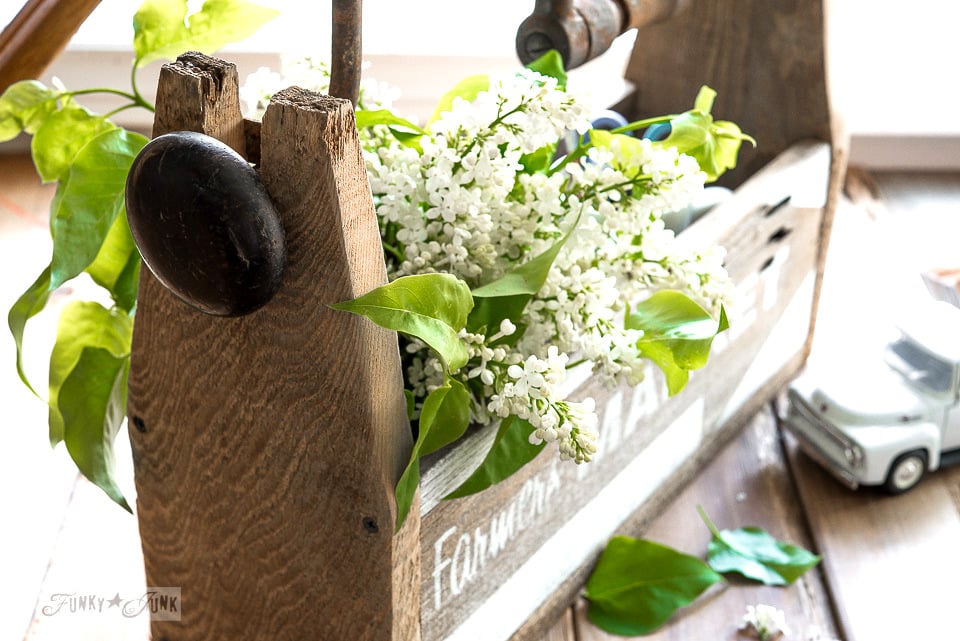 That WOOD! Isn’t it pretty?

Well, that was fun! But I wanted to try one more idea… 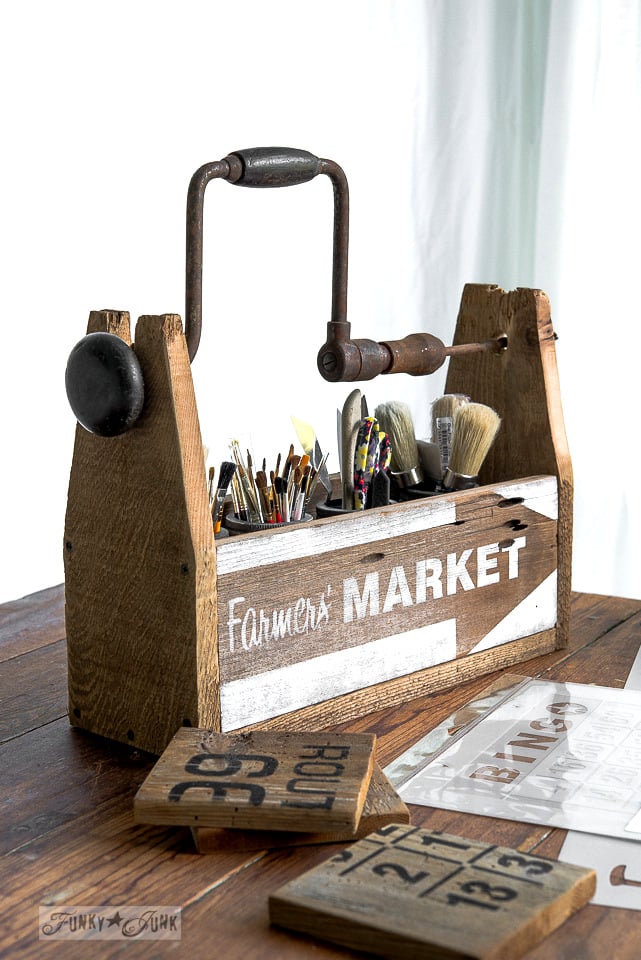 Now we’re talkin’! All my paintbrushes were a perfect fit. 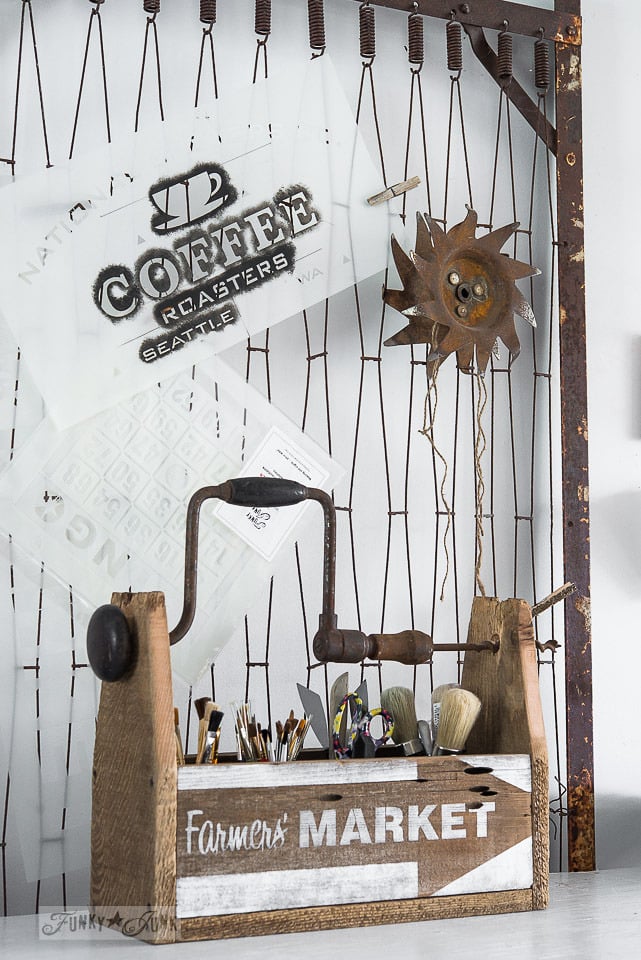 And boy did this drill handled toolbox of many talents look good in front of the mattress spring stencil holder in the paint studio.

What do you think Skye? Is the toolbox a keeper? 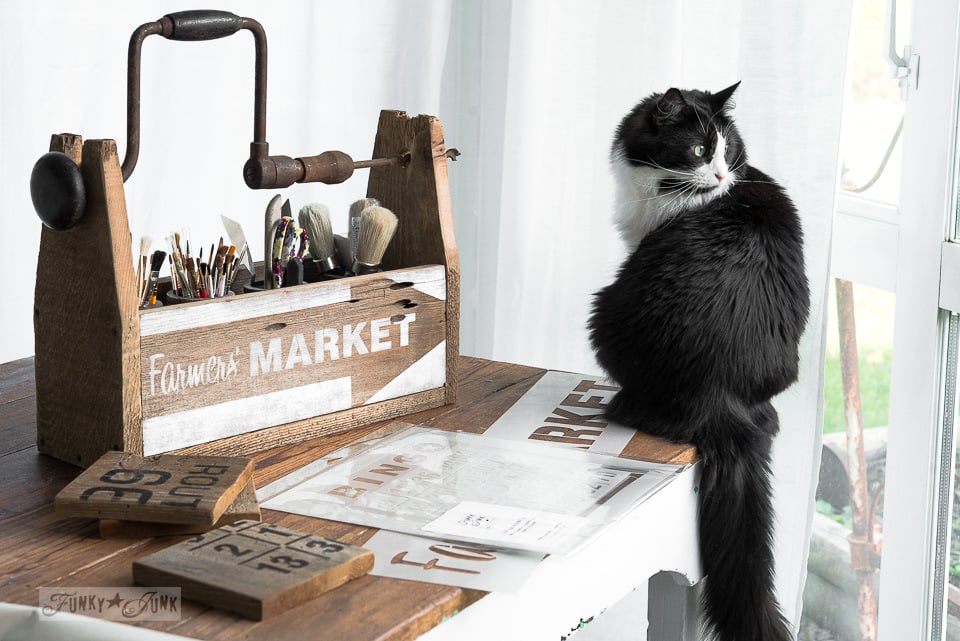 Show time comes first. I guess I’ll just have to make another. For myself and the show.

I’m going to bring some plain so they can be decorated up as desired by their new owners. 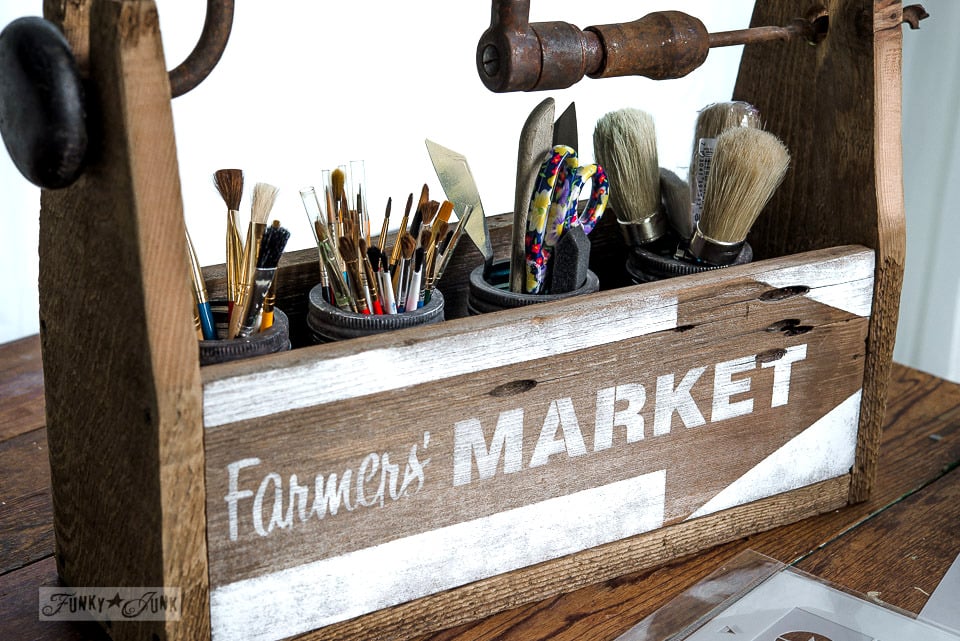 What would you use it for?

(this small Farmers’ Market arrow kit is no longer being sold)