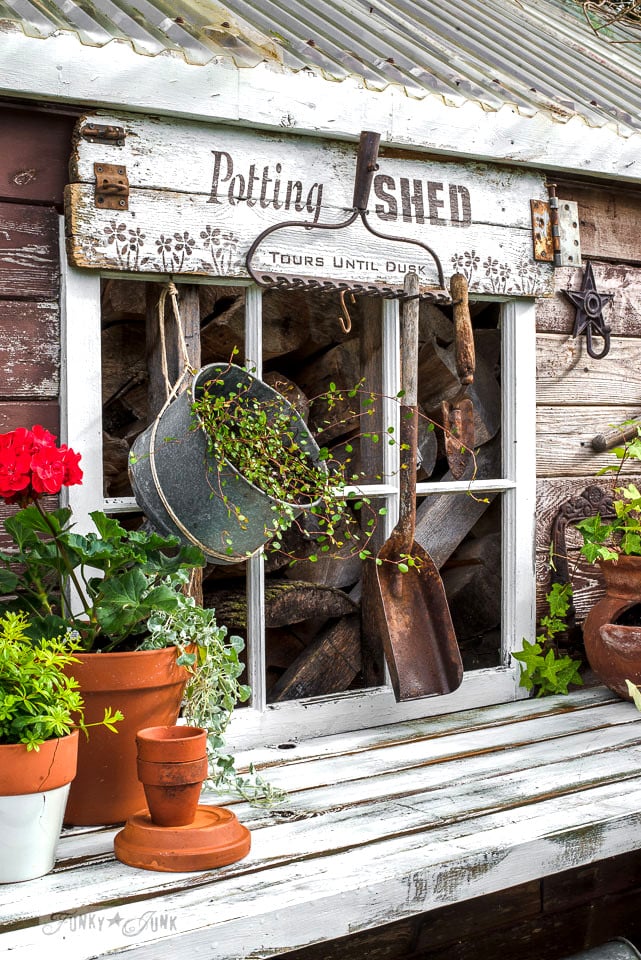 When I was asked to create some garden themed stencils, one of the first ideas that popped into my mind was to do up a rustic shed reveal with potting shed garden sign.

A potting bench was something that would entice you outdoors, keeping you creating, through the beauty of flowers and plants.

But nothing ever materialized.

Until the crate broke in front of the shed… YES!

So finally, a rustic shed reveal with potting shed garden sign plus a potting bench made from two sawhorses transpired! 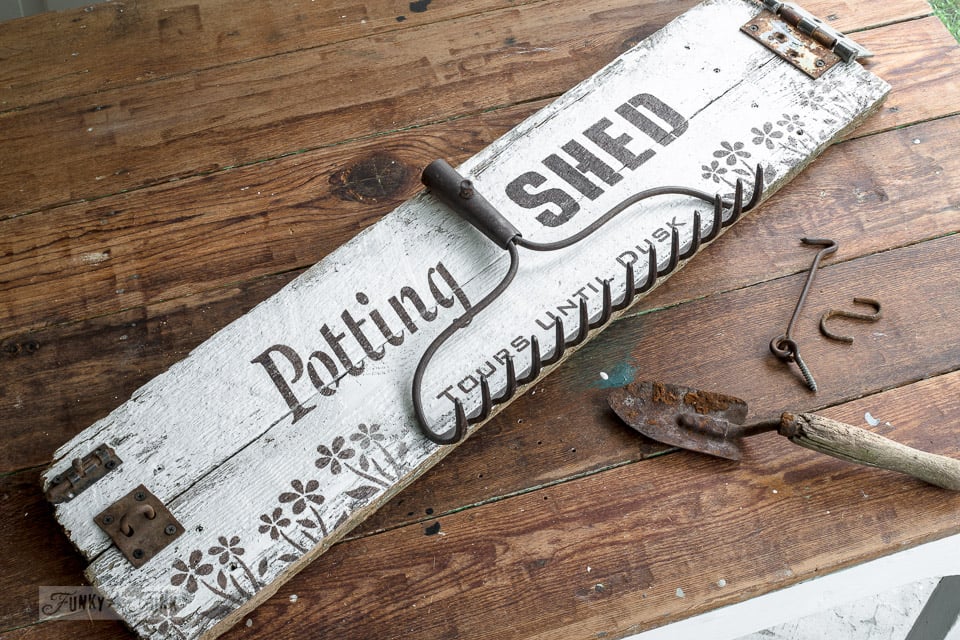 Let’s start with a Potting Shed sign, with a fun twist!

Then I’ll share how the sawhorse potting bench turned out too!

This post contains some Amazon affiliate links in which I earn a small percentage from qualifying purchases through these links, at no extra cost to you. Thank-you for helping to support my blog! 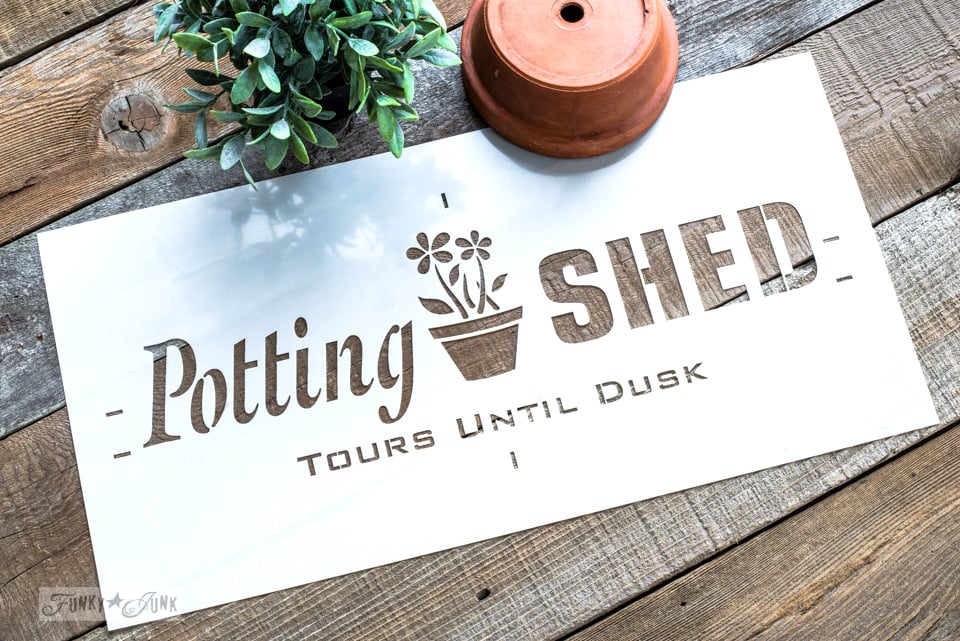 Potting Shed is a garden-themed stencil perfect for spring and summer to decorate your garden shed with! It includes a potted flowers graphics for just the right finishing decorative touch!

So let’s make a super cute garden sign that is also productive! 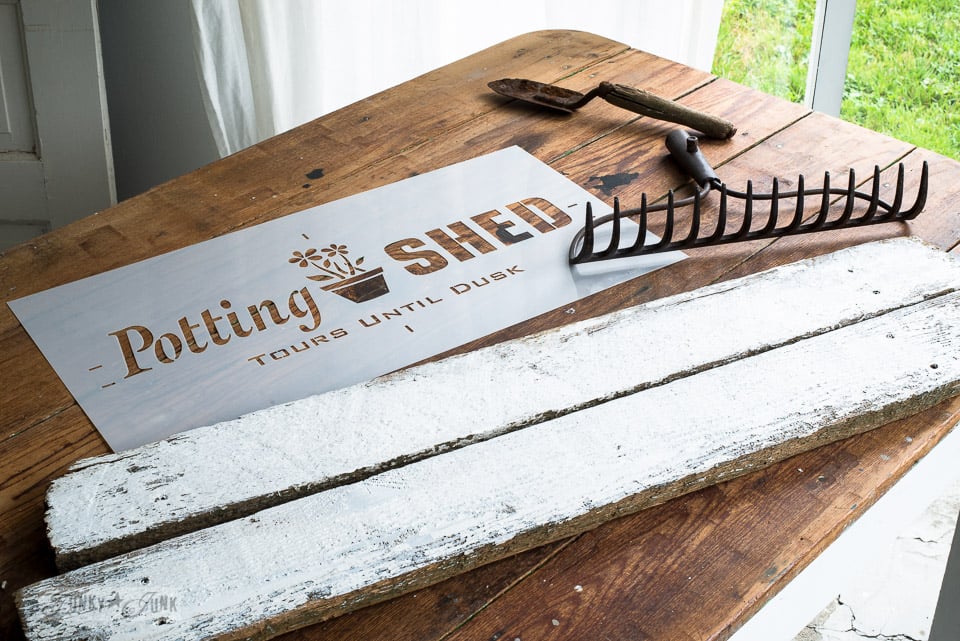 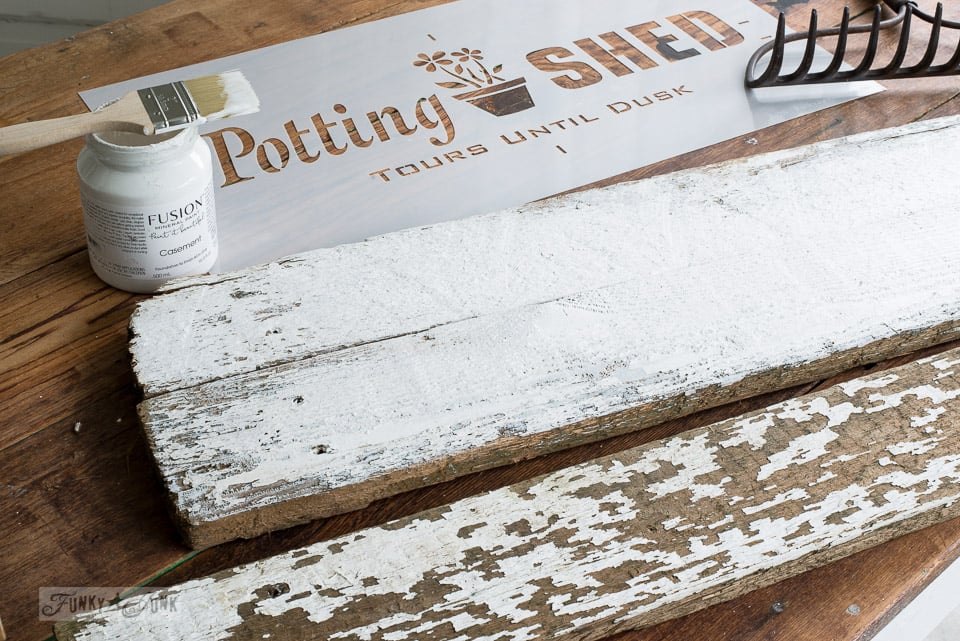 a) Two boards were fit together, to accommodate the Potting Shed stencil.

b) Fusion Mineral Paint’s Casement (white) was coated in the main areas of the boards where the stencil would be placed, for higher visibility. 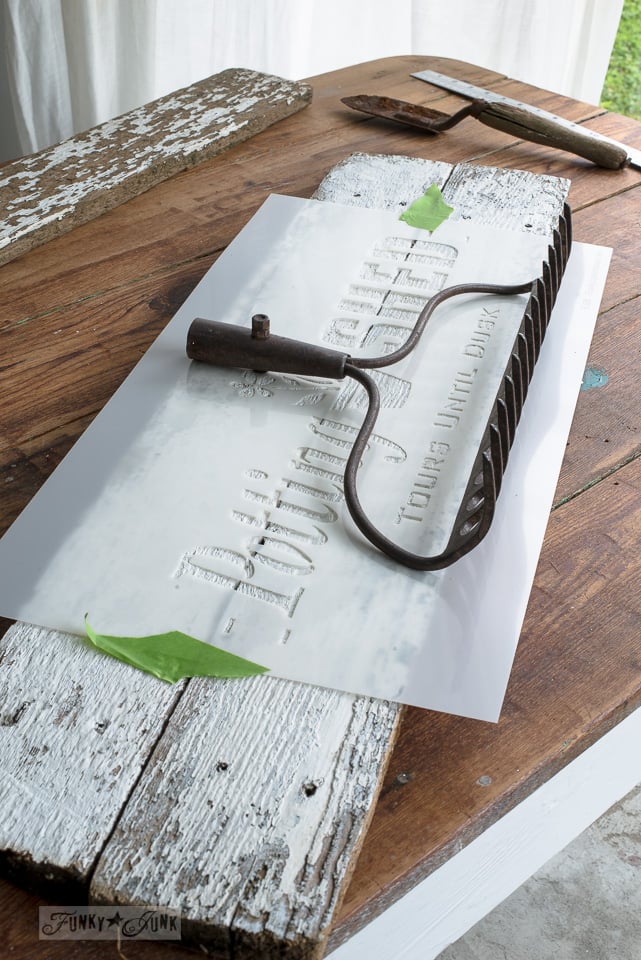 How to position the rake

.
c) Decide on placement of rake and graphics.

Note: Tours until Dusk was positioned to be inside the rake. 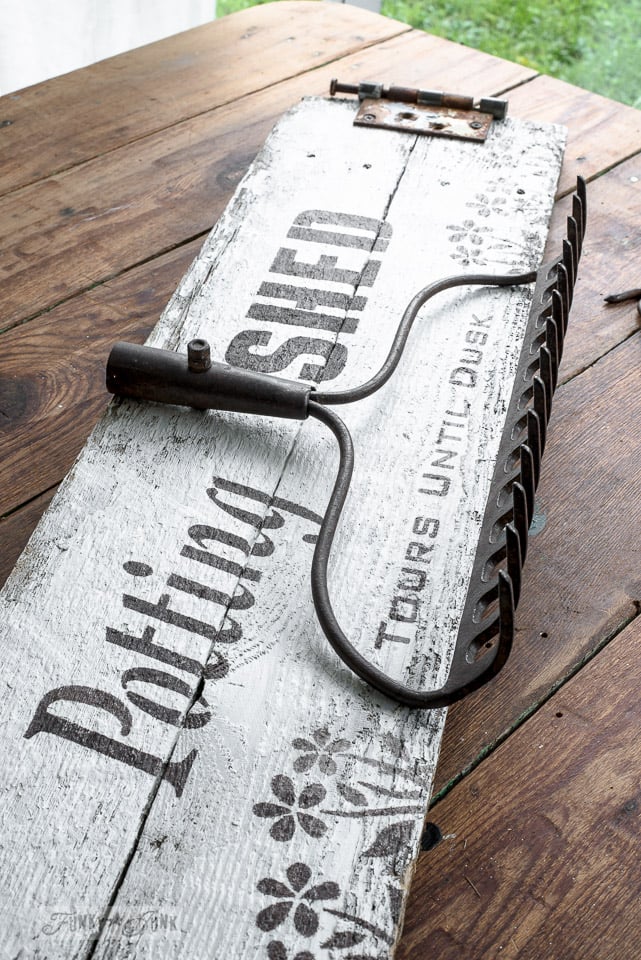 How to stencil the images

d) Using Fusion’s Chocolate, stencil Tours Until Dusk first, then move up Potting Shed, to miss most of the rake. 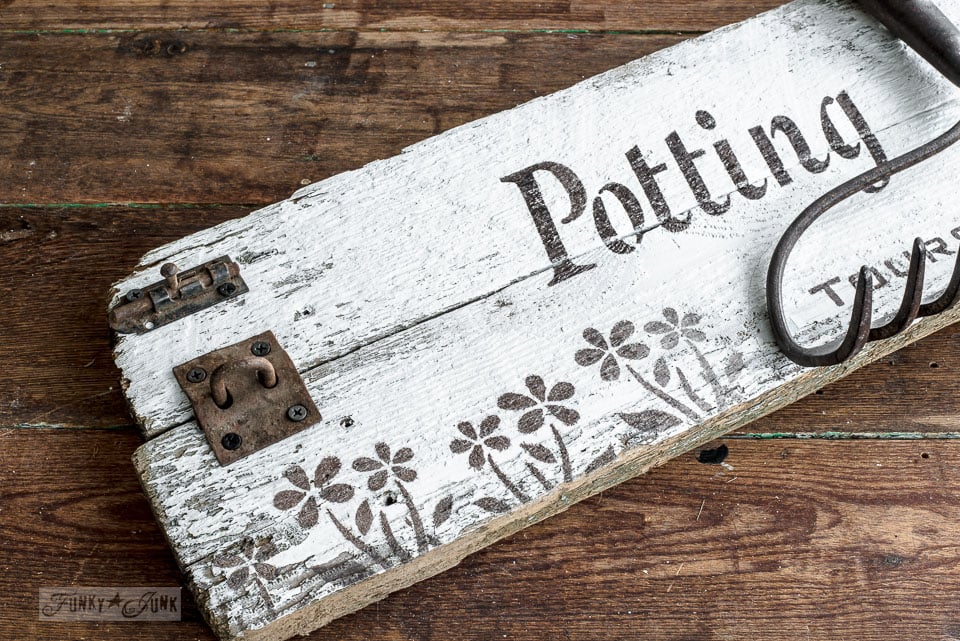 .
e) Choosing just the flowers from the Potting Shed stencil, stencil them along the bottom of the sign, just short of the rake sides. 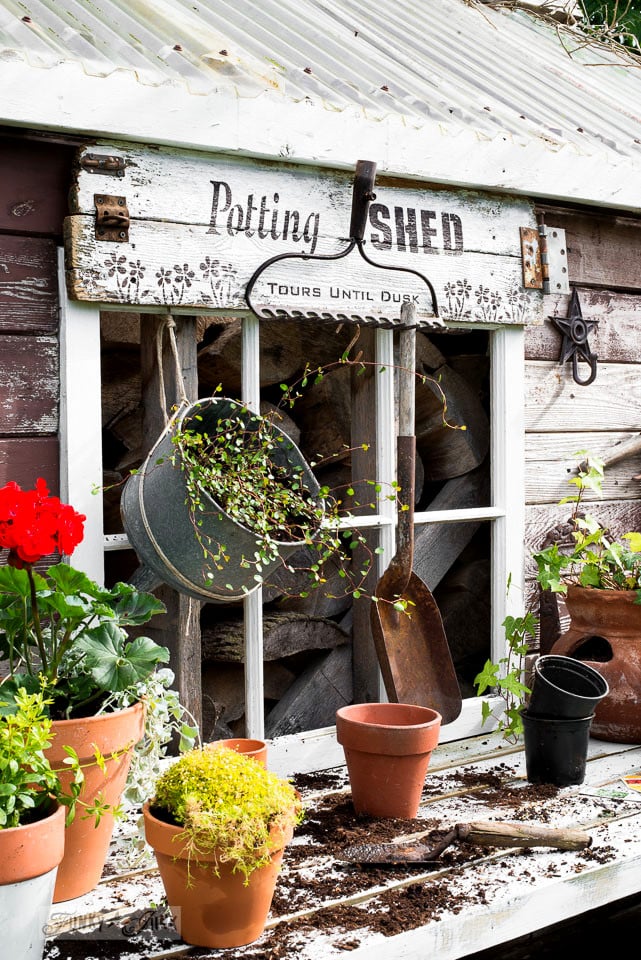 g) And add rusty junk jewelry for good measure! Ok… and to hold the boards together. I just love the character it adds.

And here’s the rest of the shed! 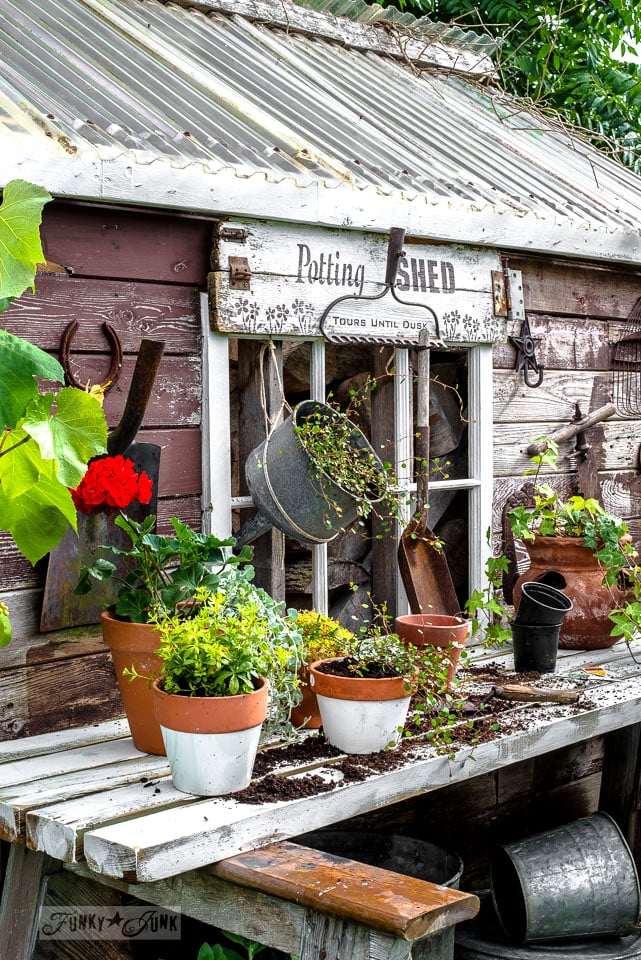 Not only does it make a statement on this shed, it’s also super productive and can hang garden tools!

It was so fun to truly pot plants on that potting bench too!

Isn’t it even pretty in all its messy glory? 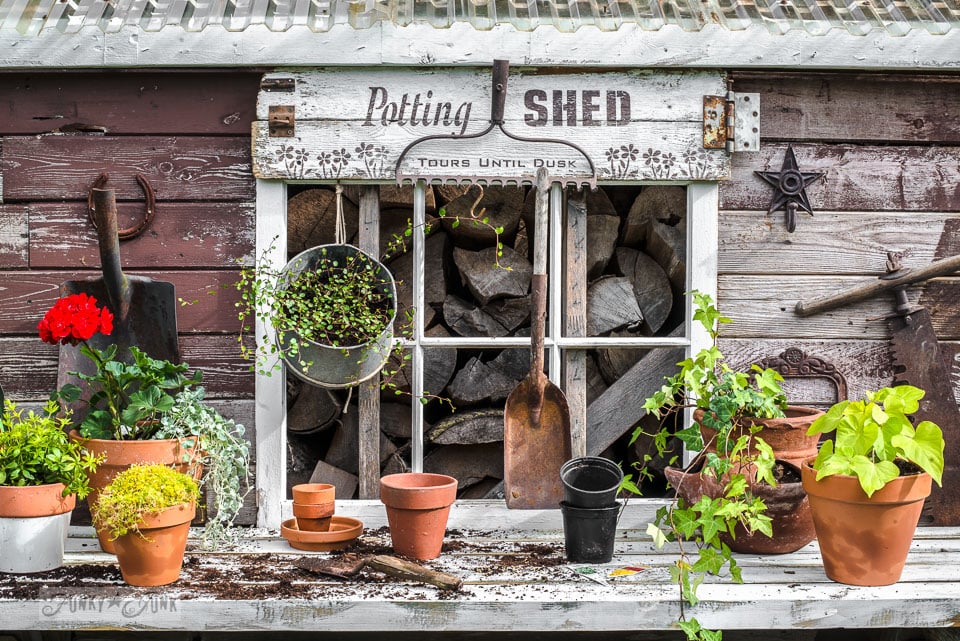 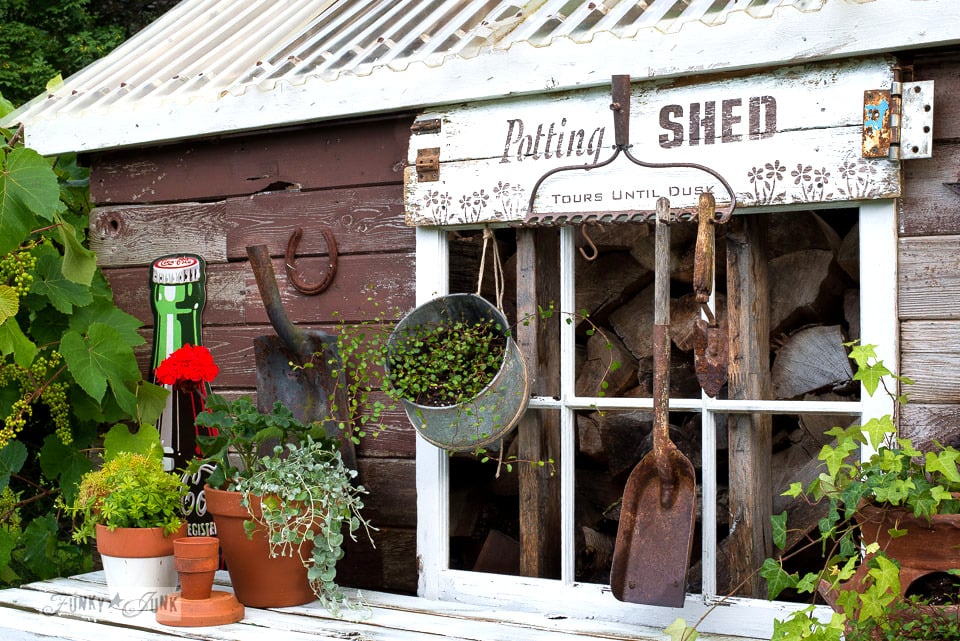 After everything was potted up, I simply hosed off the top, and it was a done deal.

The spaced boards along the top of the potting bench was the ticket. It really works! 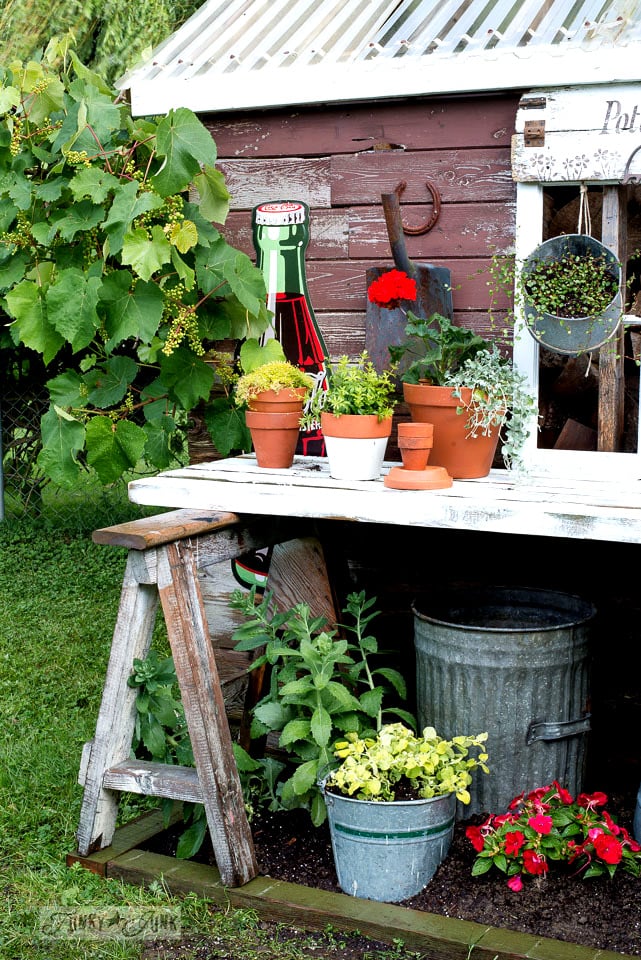 Learn how I built the potting bench in Part Two HERE

The saw horse potting bench was easy to create!

Two sawhorses pose as the legs, then add boards on top with a flowerbed underneath!

Some galvanized goods were stacked for storage underneath the bench, and as garden fillers. It really is a potting bench in action, plus a garden feature! 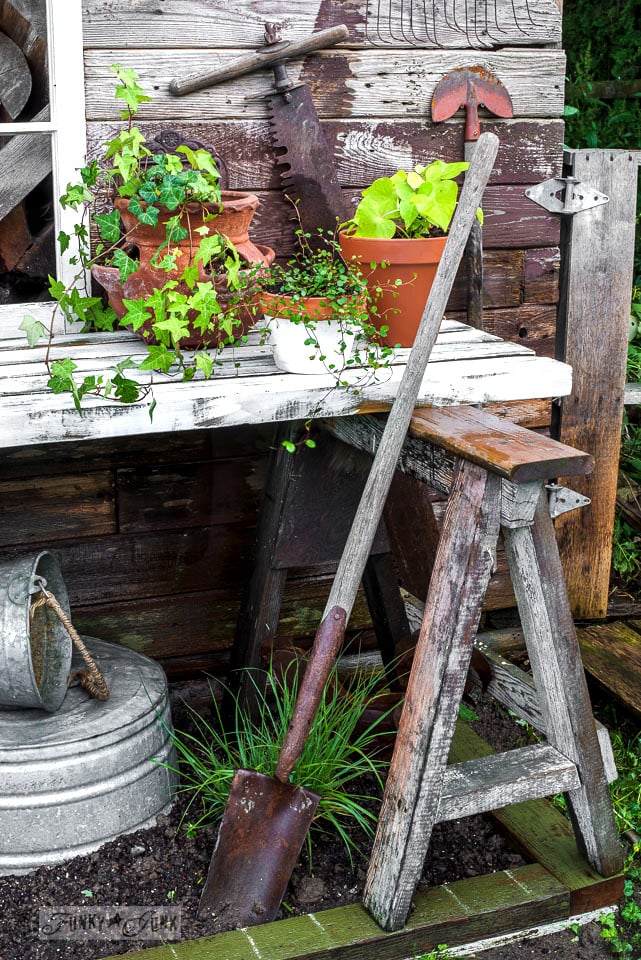 You may have noticed some boards missing from the top of the potting bench, compared to the first draft. 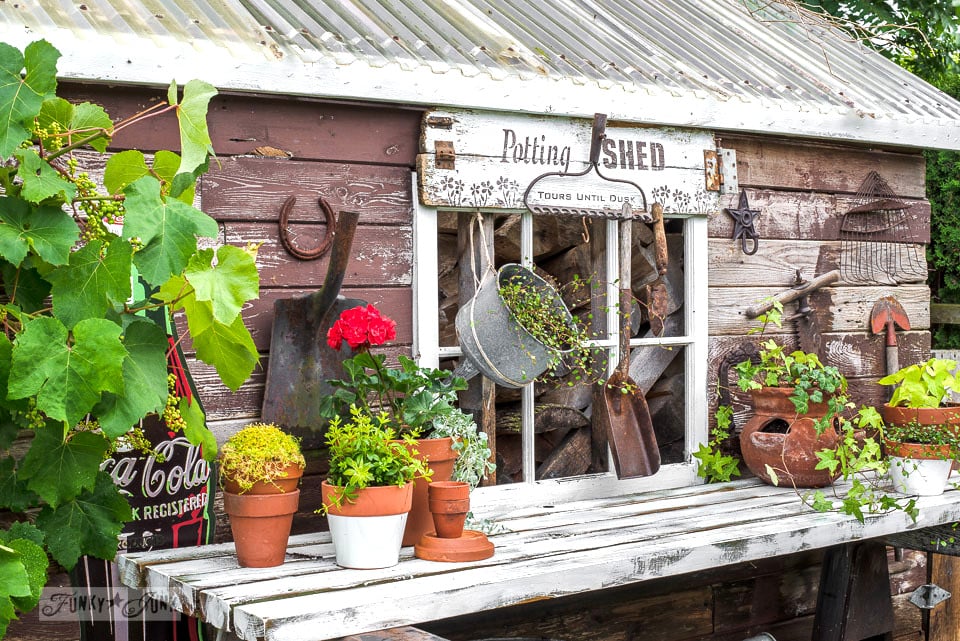 The option for a shelf or table size is awesome!

The shelf allows the sun and rain to hit the plants below. And when more working space is required, 3 more planks plunked on top will do the trick.

I honestly found the shelf size to be perfect for a potting bench space. 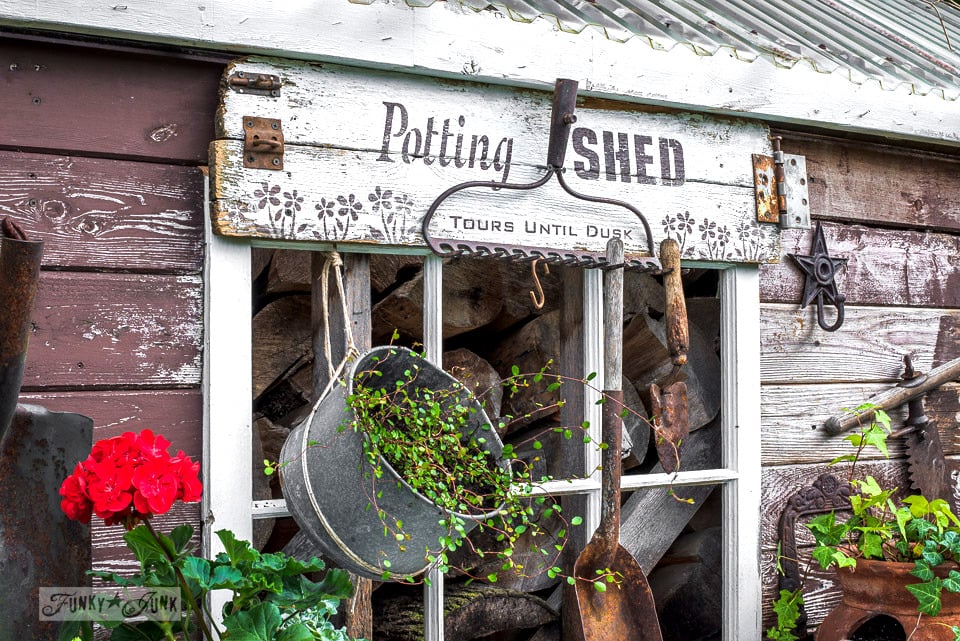 .
Recognize that oil funnel from my branch ladder flower stand?

I replaced the wire vine with a new one. Love it! 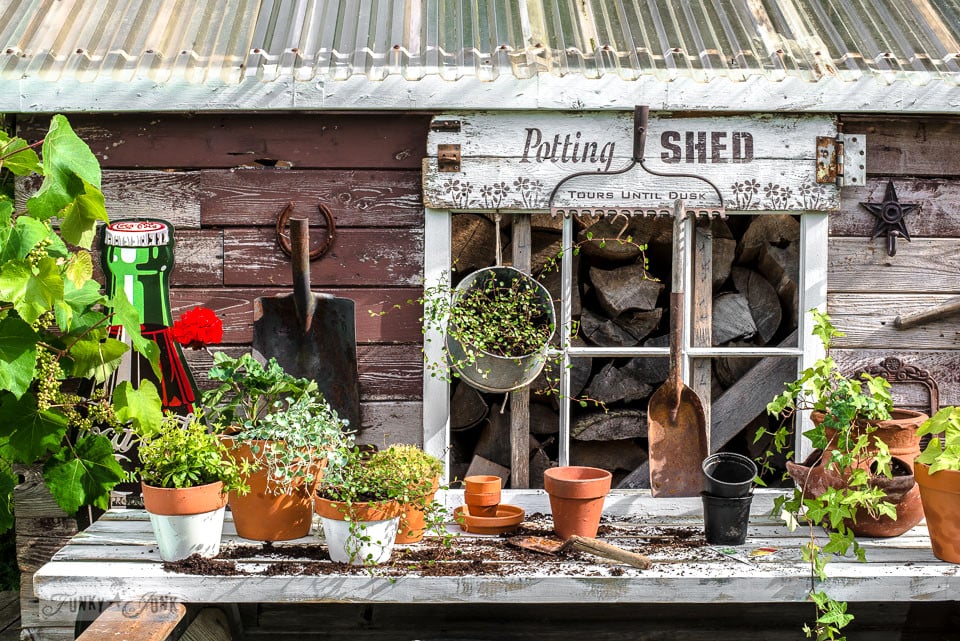 The plants in clay pots and rusty junk teamed up with the cute Potting Bench sign with an old rake is rustic and really creates a whimsical backdrop for a backyard! 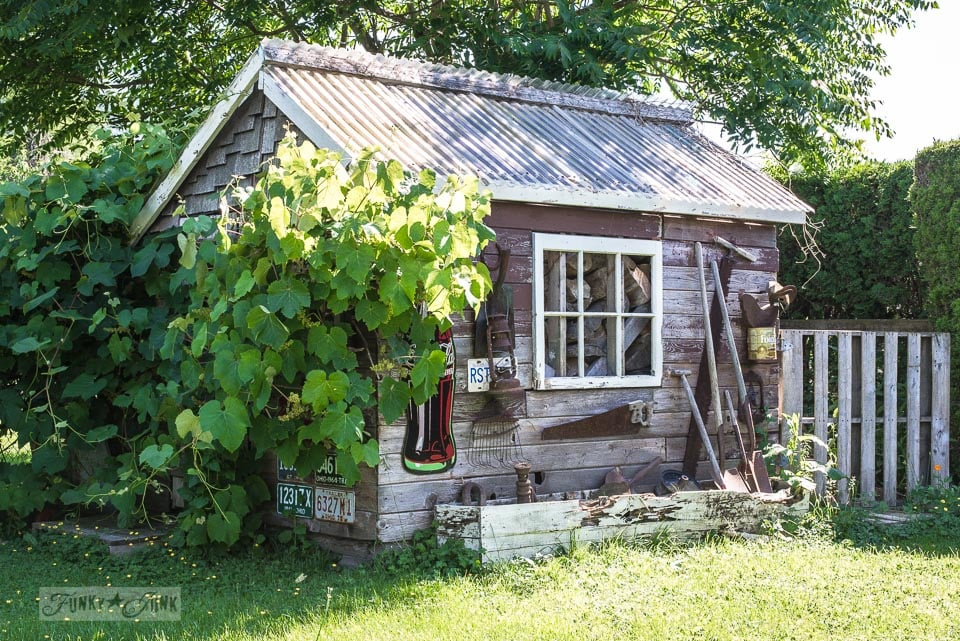 The overgrown rustic shed before… 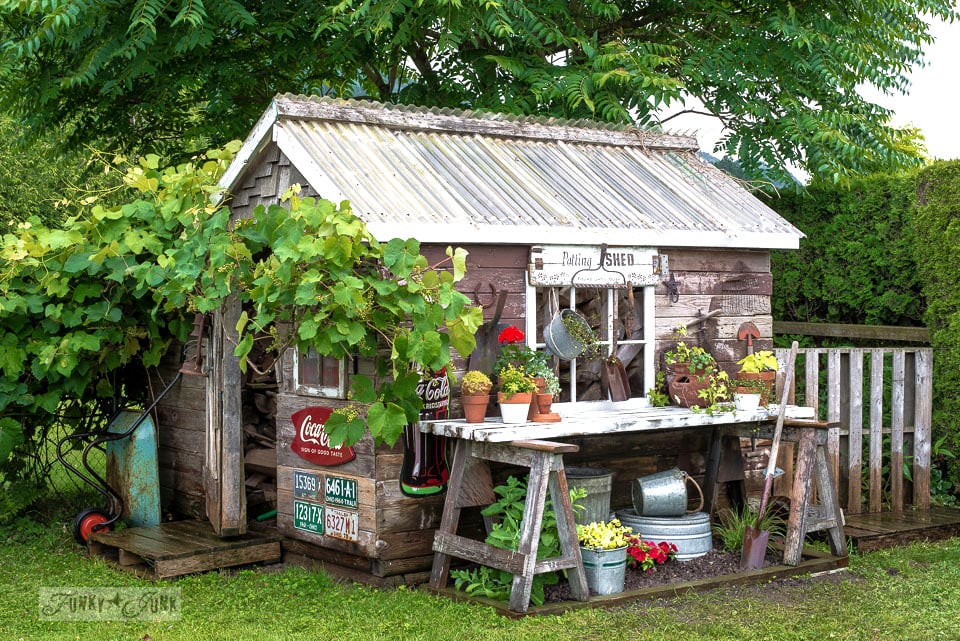 I just love your new summer outfit… and it’s so productive too!

What do you think of the refreshed shed look?

Get Potting Shed stencil from HERE

Other garden projects you may enjoy: 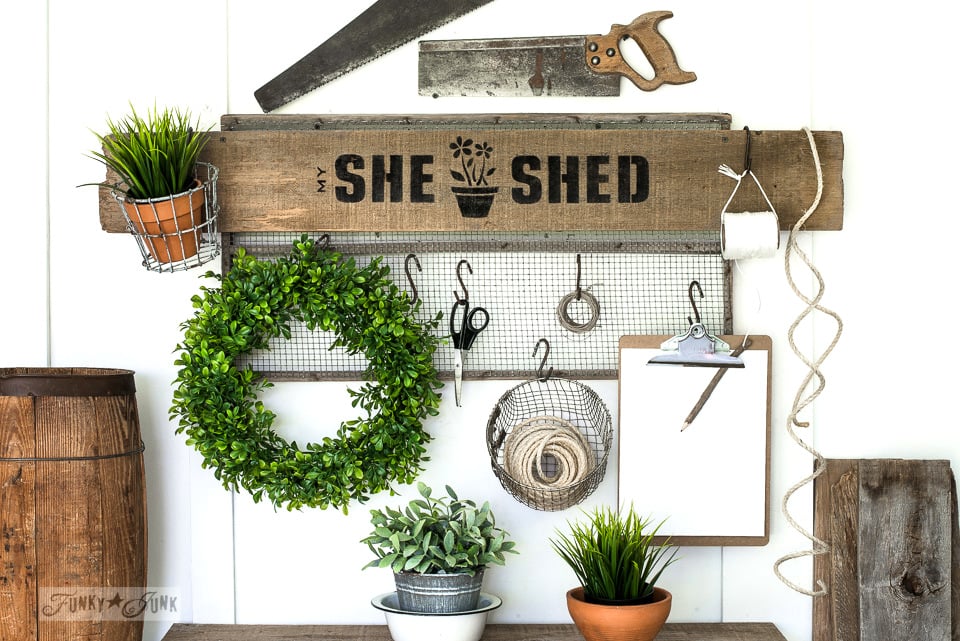 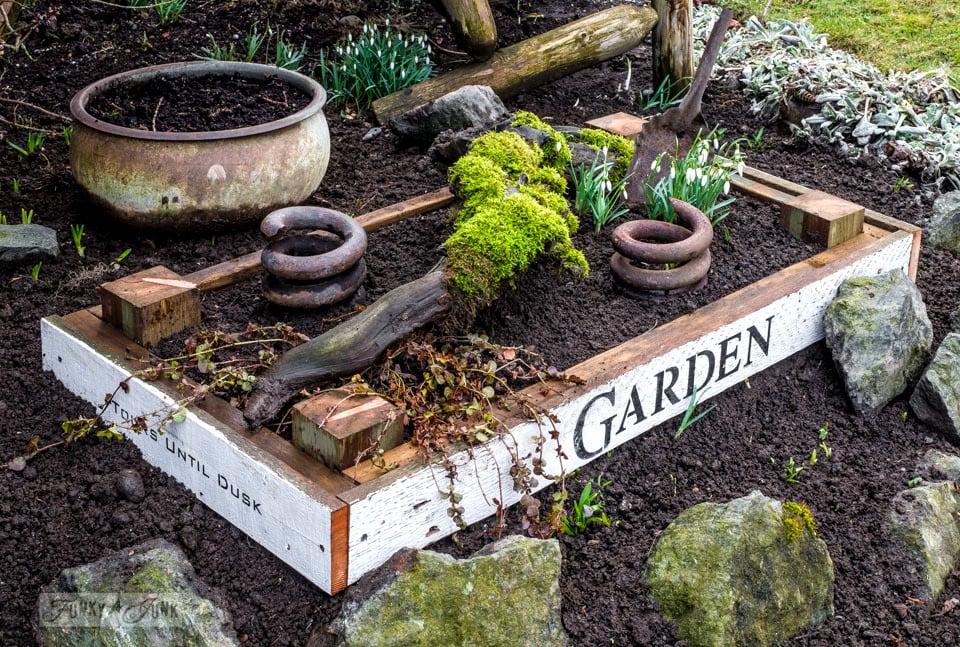 Learn how to make this oversized tulip tray styled flowerbed 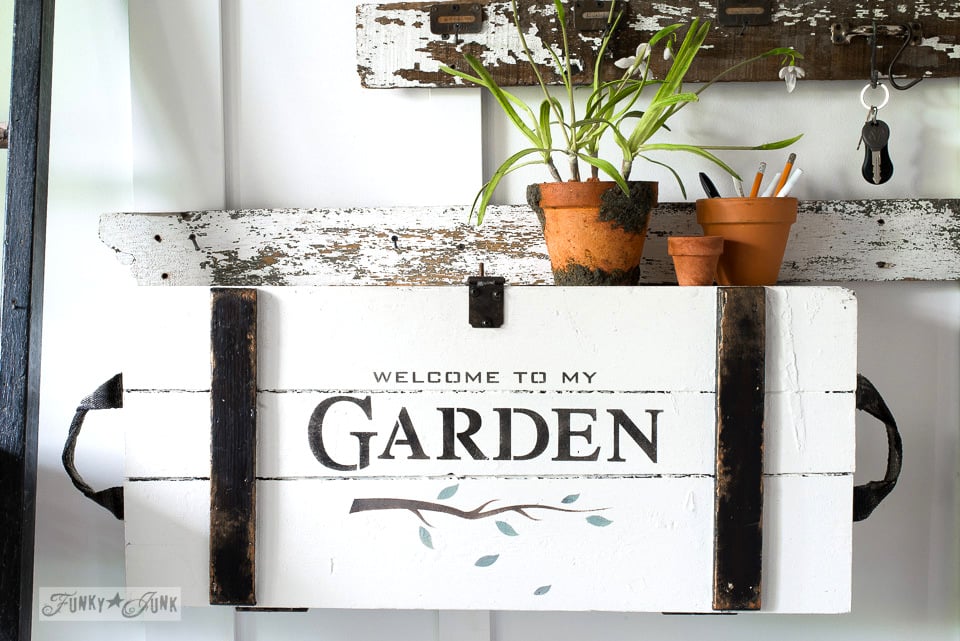 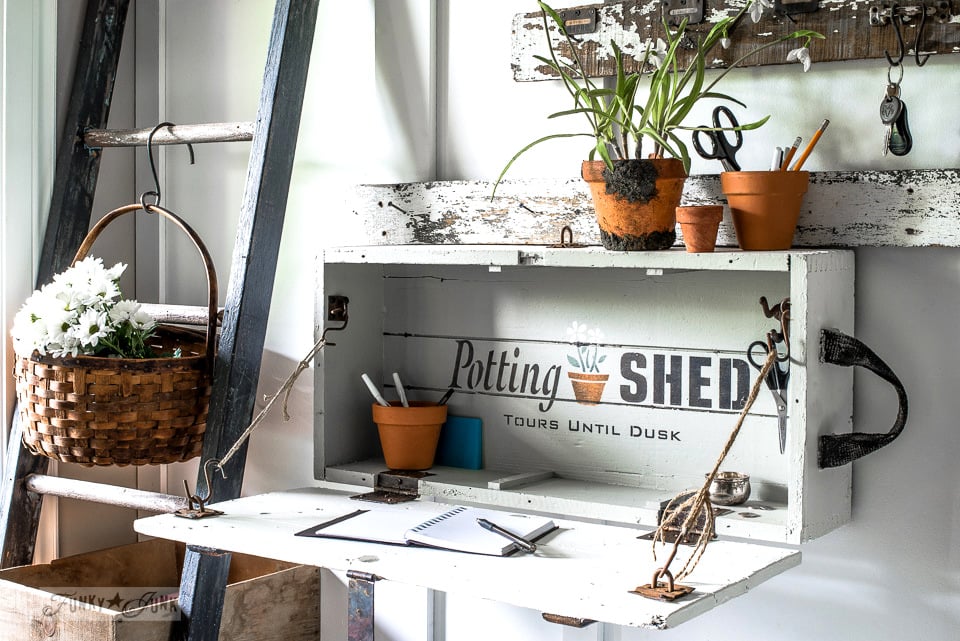 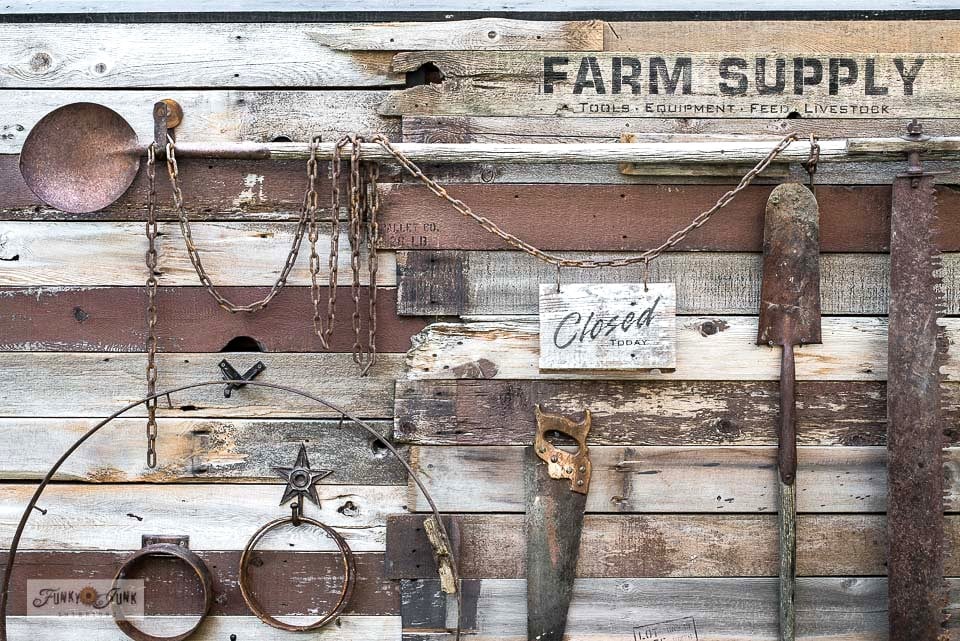 Learn how to make this reclaimed wood fence 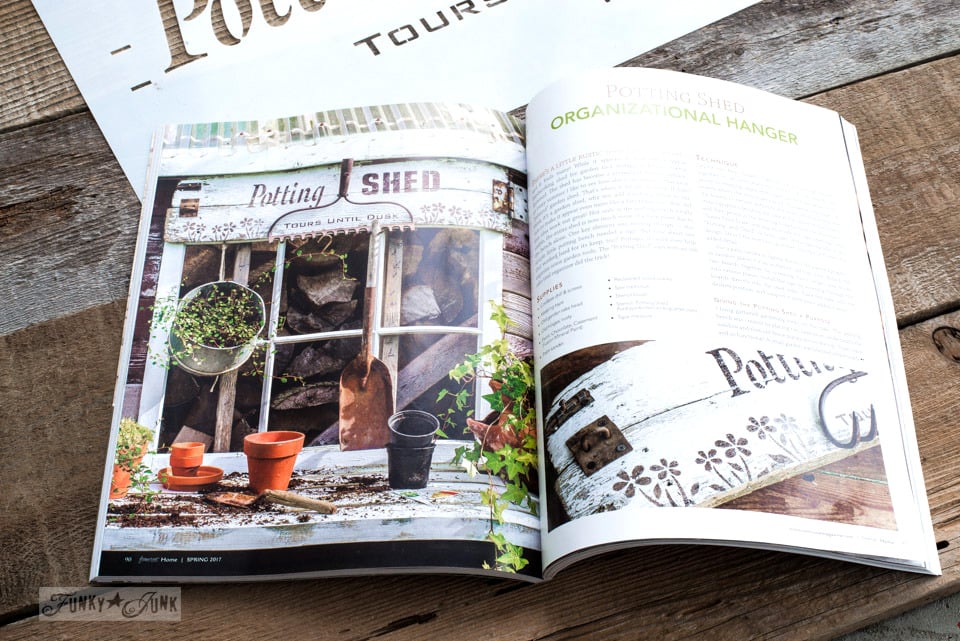 This project has been published in Somerset Home Spring 2017! Read the post HERE