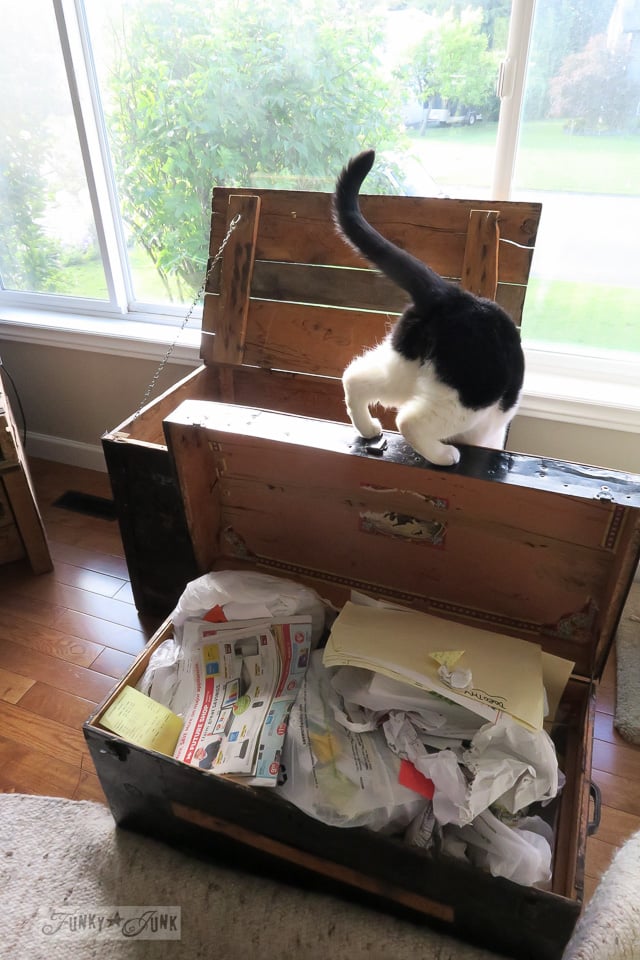 So, we’re right in the middle of summer… and guess what I’m doing.

And it has nothing to do with gardening. Which I should be doing too btw…

It has everything to do with clearing out stuff. I am in the middle of a massive PURGE. But beyond.

Talk about the wrong time of year!

I’m gonna blame / thank my sister for this one.  She just purchased a new house and is moving soon.
When she made a casual comment, “I’m not worried though.”, that caught me off guard. Big time.

The word “move” would have me stressed beyond words.

My own house is far from for-sale ready. From unfinished floor tile, to repairs that need attending to… never mind the extreme purging and packing part that would entail monthSSSSS.

“Do you mean to say, your house is ready-to-move mode? As in, you don’t have to do anything to it? You can basically just pack up and go?!” 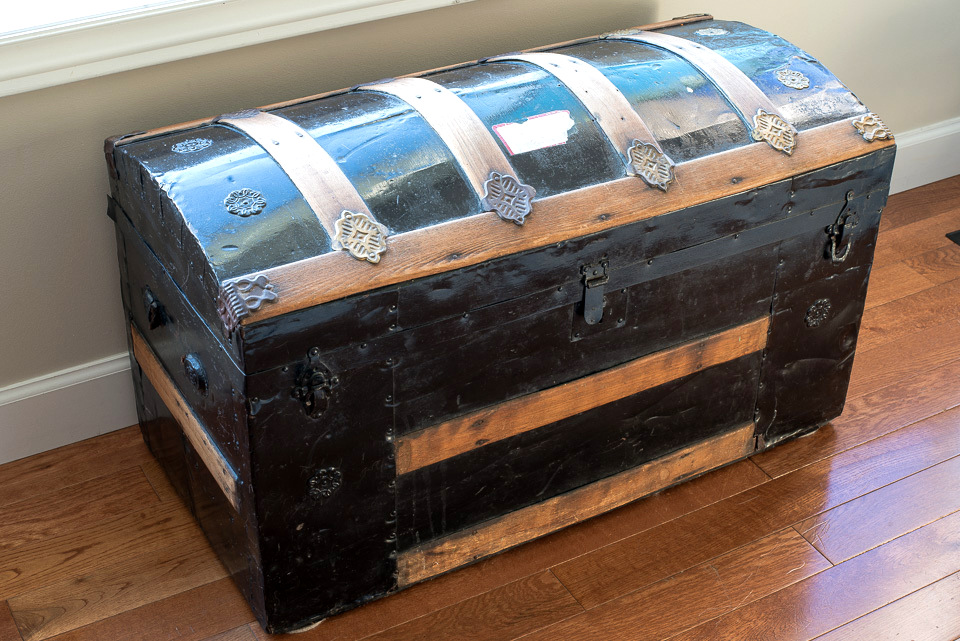 Since that little announcement, I’ve been walking up to every little thing that hasn’t done a world of good lately in the house, and have been selling online.

This trunk for example, is a beauty! But it’s been filled with paperwork needing shredding for years. I mean… come ON. Talk about out of sight, out of mind.

The trunk was also in my way. What makes it not a perfect fit for my home is the fact that the top is domed. It just eats up space which I don’t have. So it’s gone. 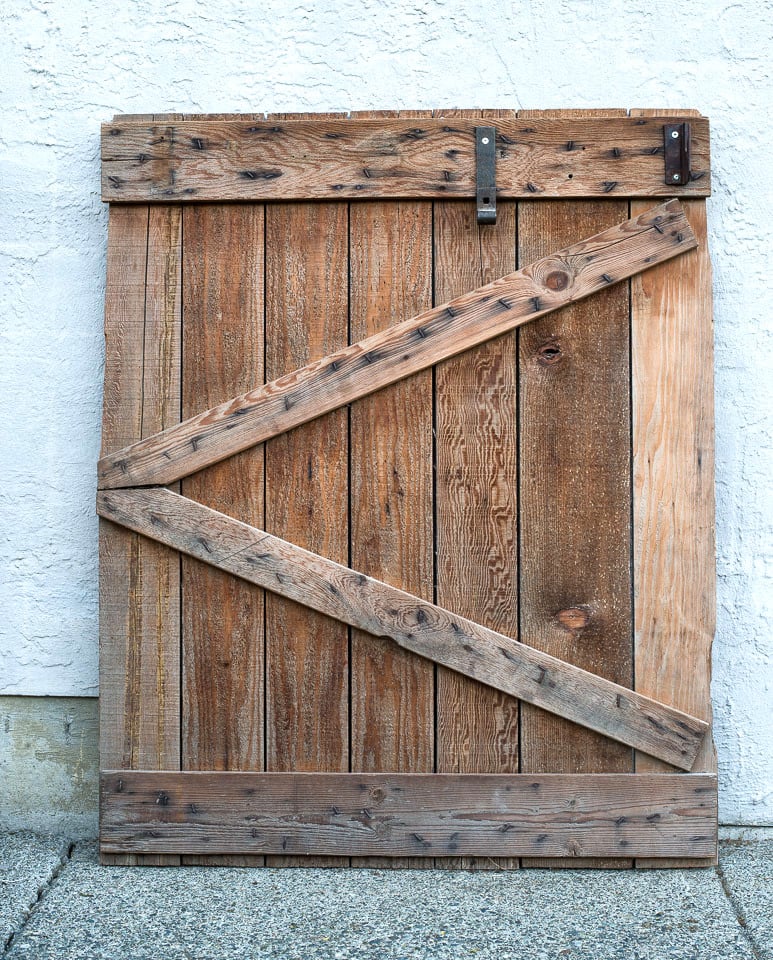 This gate has been in my ensuite forever hanging towels. But it’s always full of dust, and felt heavy in the small space. Since I didn’t have a good place for it and it’s hard to clean, it’s gone too.

As you can see from these two listings alone, I’m digging deep. I’m letting go of stuff I actually love because it’s ran the course of time here and / or lost function.

But this round, I’m scraping every square inch, because the doozy comes within those missed inches. 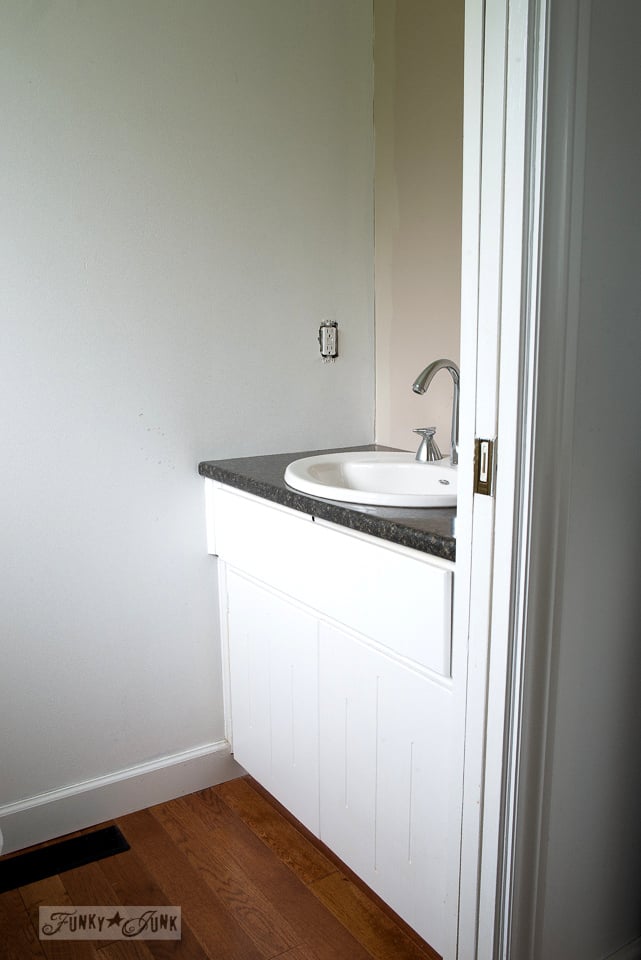 See the vanity? I just hung one of those doors that had been sitting against the wall for… oh, I don’t know… years.

Why? I think my intention had been to replace the doors, but never did. I don’t even remember any longer. The door took 30 seconds to rehang.

Underneath my bed was a vent piece for the front of my fridge. I delayed installing it (for 10 years) because I didn’t have the right screws.

So because I was gutting underneath the bed, I brought the piece to the fridge and layed down on the floor to see what I’d need.

The screws were already in the fridge, waiting for the vent.

My focus for too long has been on surface cleaning. So this round, things are different. 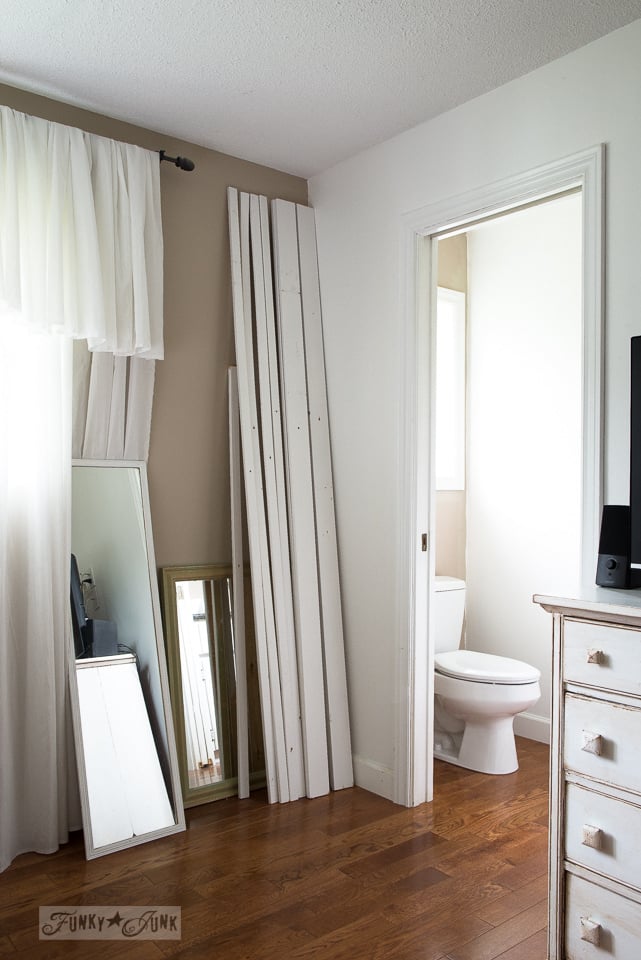 Well… close. You get the idea.

Those crooked boards were removed off the walls, so now I’ll be enticed to repaint. They’ve needed it forever. And now I’ve lost the excuse that ‘it’s too much work’ for when I’m ready.

And now that this corner is empty, I’d love to put that tall mirror to work as a standing one. I haven’t had the space to hang a full length mirror in this bedroom EVER. The walls don’t work, it has to be on an angle. So I’m excited for an excuse to build something new! 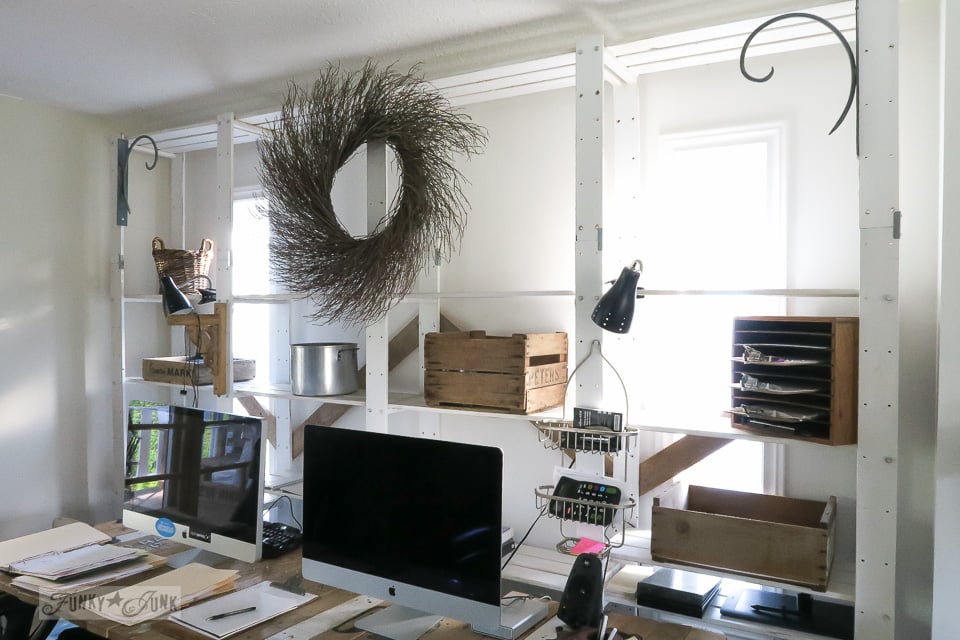 I also ventured into my blog office. It was so messy, I gutted this entire shelving unit and desk area to do a deep clean. Then only put back the necessities. The pretty can come later.

I’m starting to think there is no reason to store stagnant things… it’s really so dumb when you think about it. 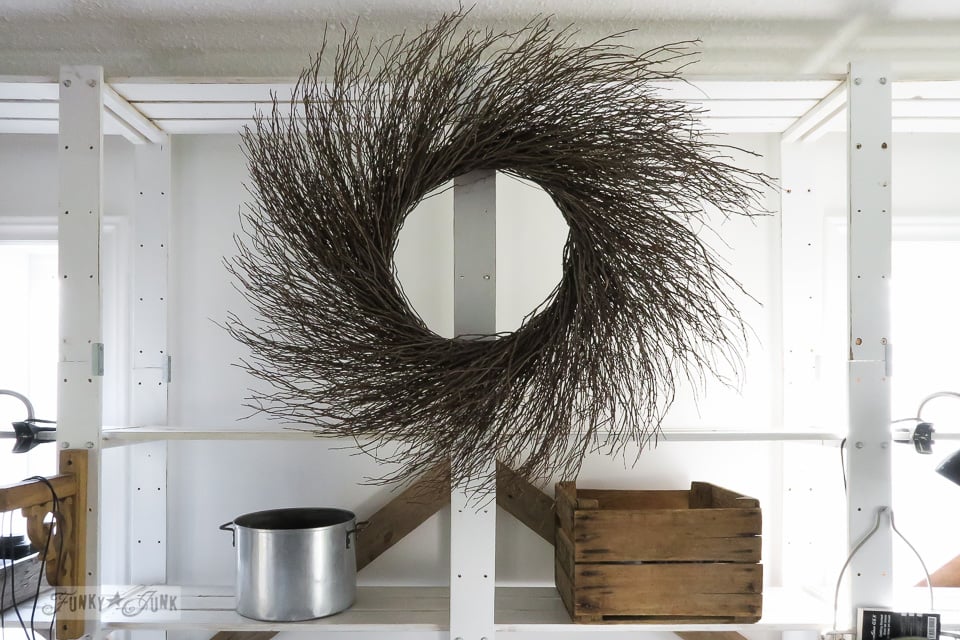 See those empty shelves? They are staying that way as long as I don’t need them for anything.

Speaking of breathing, I had a reason for all this crazy deep cleaning too, which went beyond purging.

I kept coughing in my bedroom, which was reminiscent to last December when I returned from Maui. It was as if my lungs closed up from the dust after living in trade winds for 6 weeks.

So, everything that was cloth in my bedroom got tossed in the wash, hung outside to dry, and no dust was left in that room. The result? No more need to cough. Gone.

If I had left the clutter underneath my bed, I’d still be coughing.

I can now see the huge merits of not having storage or surplus. The dust alone is a killer. A place just has to be loose enough to deep clean upon will without making a big to-do over every little thing.

Empty shelves, corners and trunks. And beyond. That’s my goal.

So this is why you haven’t seen any pretty stuff in the past little while. 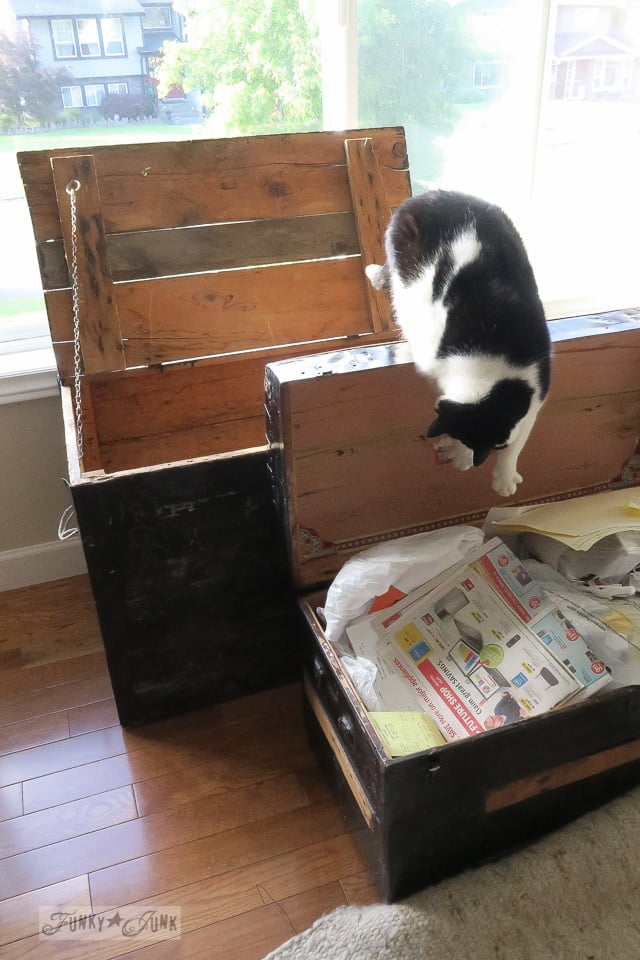 How to clean IKEA sofa covers (and keep them white!)
How to clean pet hair from puzzles
Cleaning accessories and valuables (and windows) Wk 8
How to purge your clothing - wk 2
Purge and clean your homes challenge! Are you in?
Why I'm storing dry goods in a kitchen pantry with containers and bay leaves.
Facebook Pinterest Twitter Instagram RSS

12 thoughts on “Empty shelves, corners and trunks. Plus.”