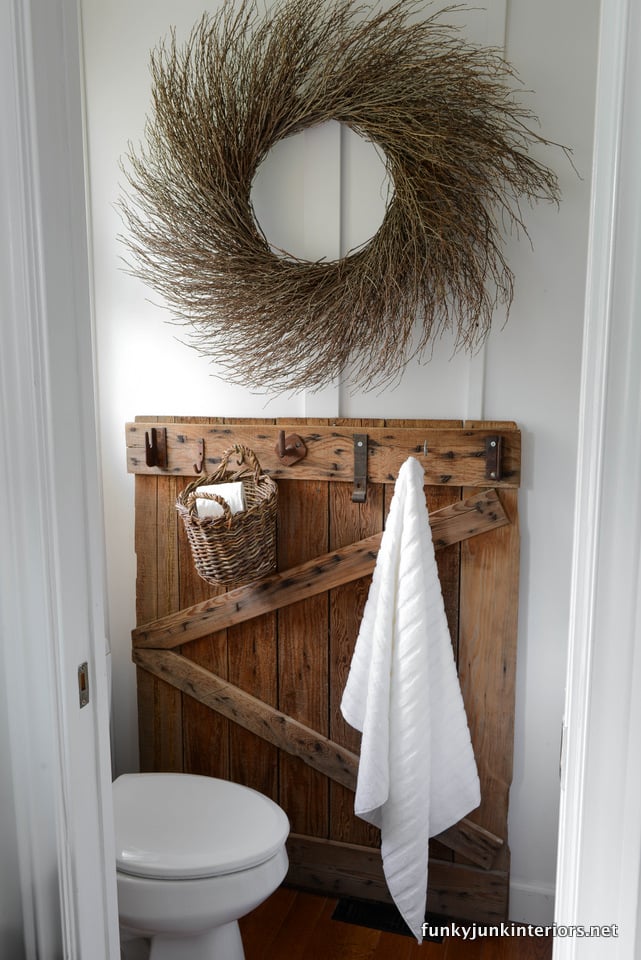 Yesterday I spent a day at the beach. It was so nice to sit on a chair, with a mocha frappucino in hand, facing the gorgeous water and mountains, with the sound of the waves lapping along the shore. I even did a little junk’in at Rusty’s again… (more on my day soon!)

And that’s when I started dreaming again about having my own cabin one day. If only…

It would be so nice to pack up the clothes, then take off to the cabin for the weekend. And naturally my cabin would be very close to junk shops, so I could putz around in my also lake front workshop and make things… 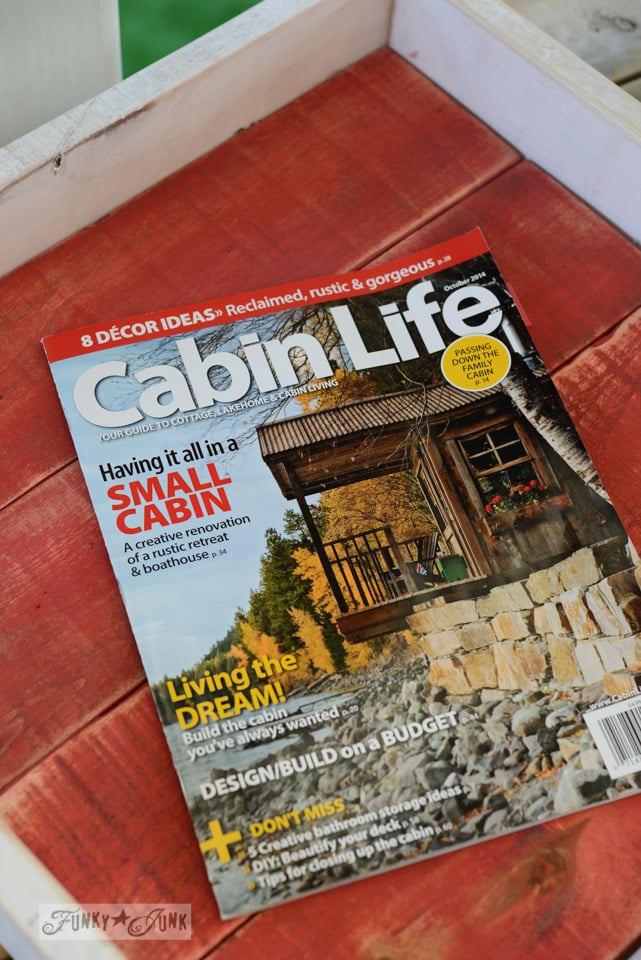 Well, lately I got to do the next best thing to my little dream… Cabin Life Magazine called on me to do a feature for bathroom storage ideas that would be suitable for a cabin.

So I got to work… 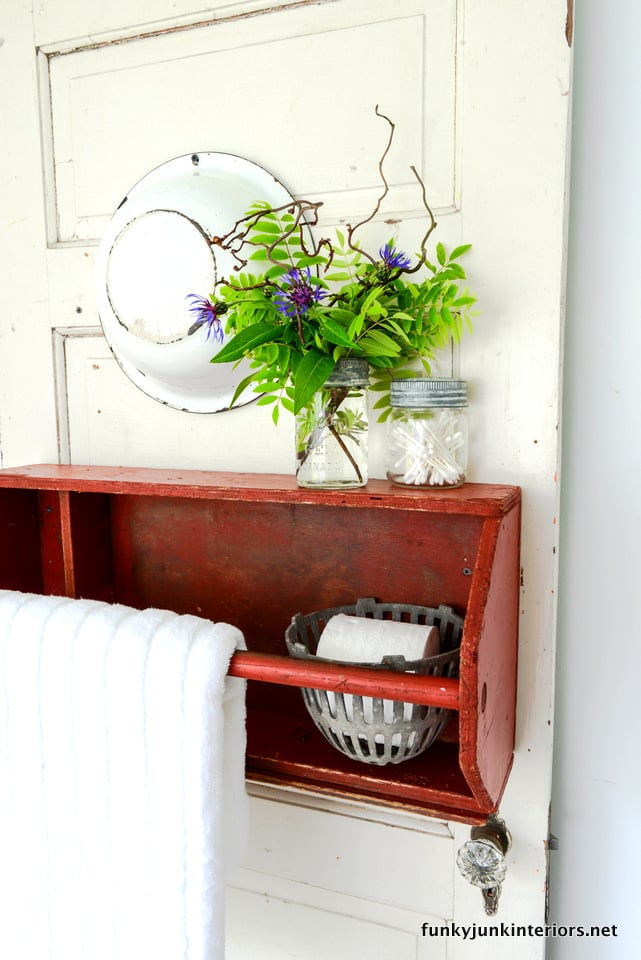 An old toolbox got turned to it’s side, mounted to an old door, and became an instant towel holder. And now I want to take it off that door and put it in my own downstairs bathroom. Maybe I’ll just leave it on the door. I really love it!

It’s a good sign when you sell yourself on your own idea, don’t you think?! 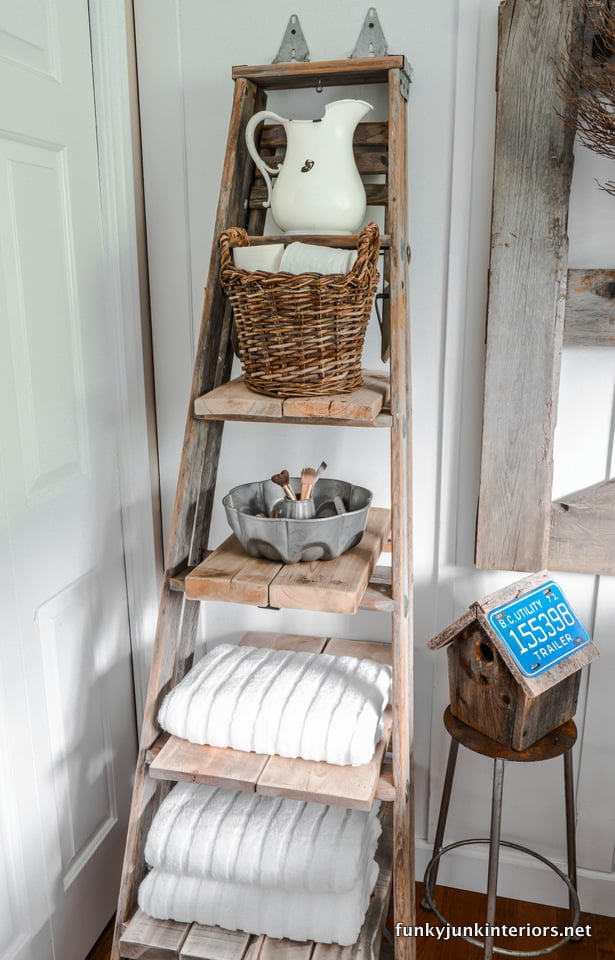 And then I morphed my ladder side table into a towel storage unit. Yes… I think if I had a cabin this would be perfect! 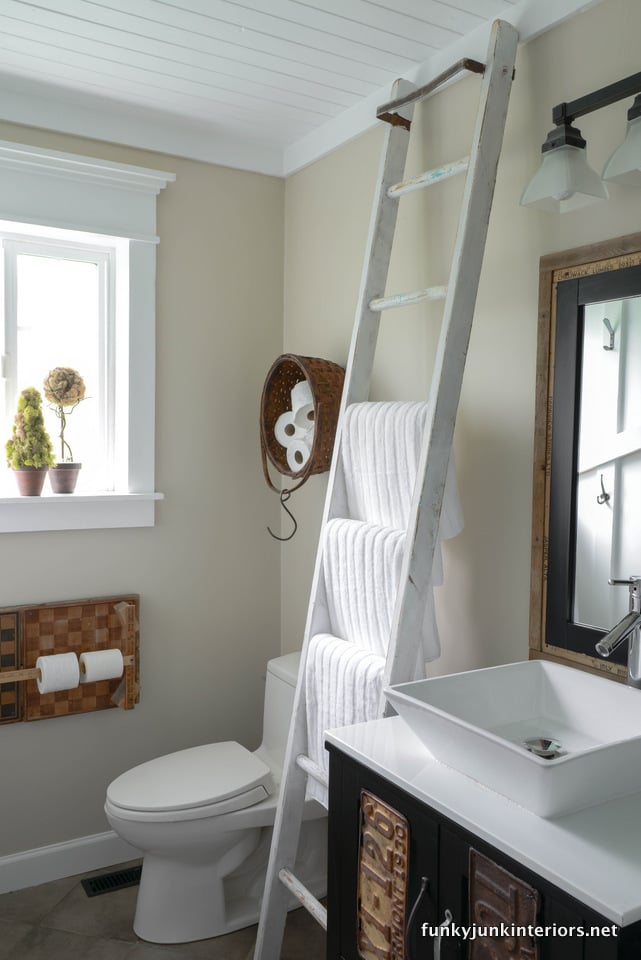 You’ll recognize this bathroom… it’s the way I have it now. But I reshot the room to show the ladder as the most prominent feature. 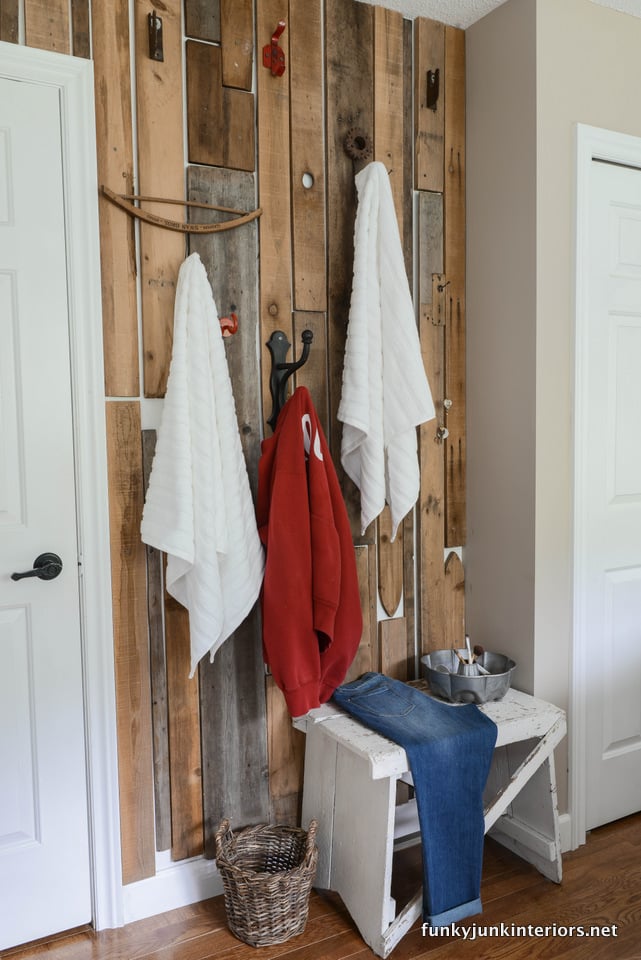 By this time, I was on a ROLL. My pallet wall in my master bathroom became a pretty funky cabin wall idea, with a sauna touch, don’t you think?

It was so fun to morph areas in my home to do something else. And I must have sold Cabin Life on the ideas because… 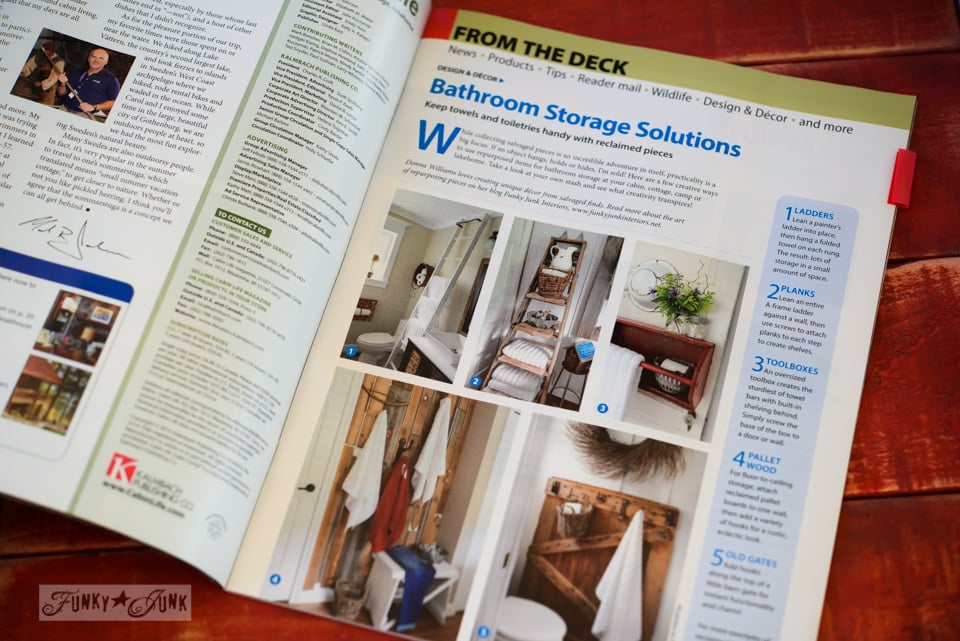 They all made it into the magazine! WHOOOOP! 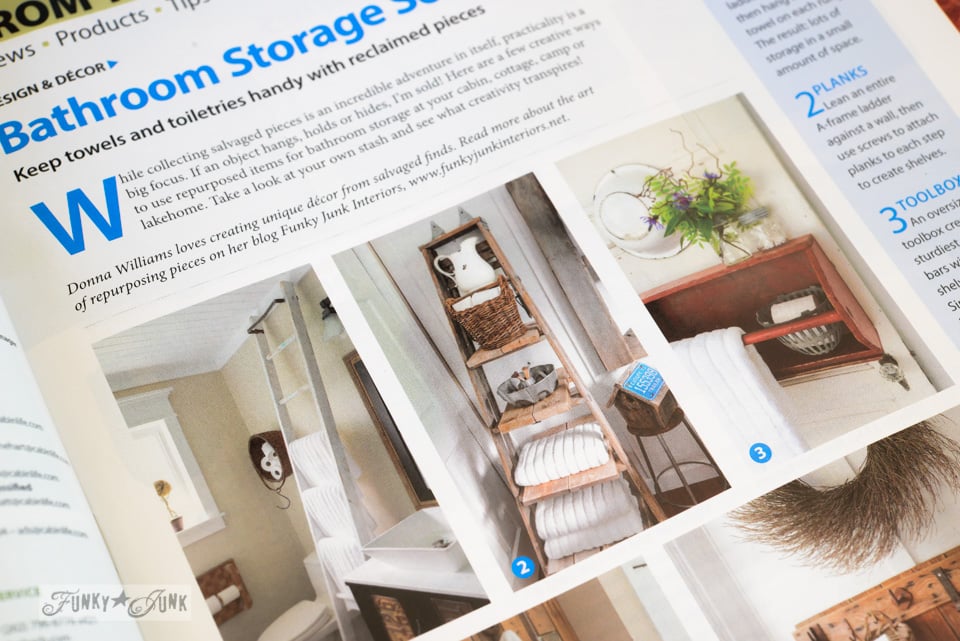 Let’s see… it says right there IN PRINT… “Donna Williams (<—— that would be ME!) loves creating unique decor from salvaged finds…”

Why yes I sure do! And it was so fun to pretend I lived in a cabin for a short while… even if it was in my own home. 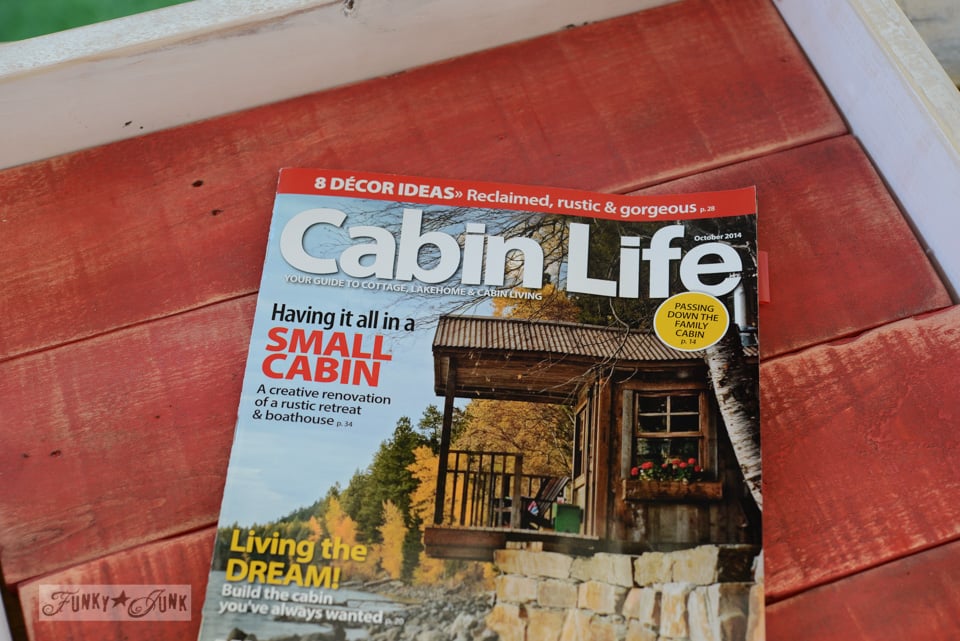 Oh Cabin Life, you make my heart pull so… because you KNOW I had to browse through more than just my own feature, right? 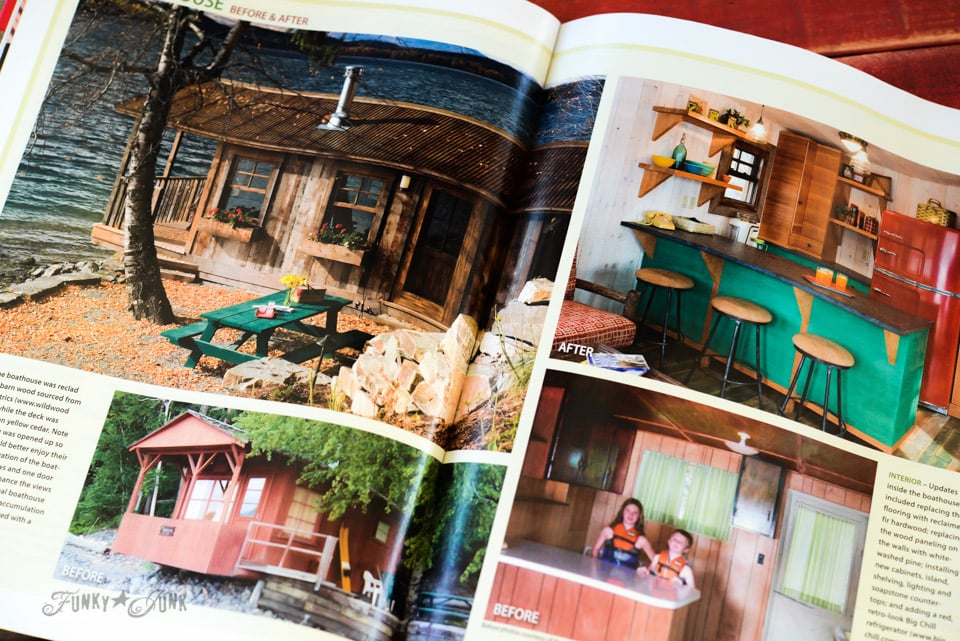 Thank-you so much, Cabin Life, for accepting my crazy ideas, loving my photos, and allowing me to be living (close to) a Cabin Life with bathroom storage ideas. Even if they were from my own home.

Maybe one day I can write for you shooting from my real cabin. 🙂

A girl can dream, can she not?

You can see my other Cabin Life feature of my stairs HERE.

Disclosure / I partnered with Cabin Life for the magazine feature, however the blog post was my idea. I love to show my appreciation to those that feature my work! 🙂

A message for those fearing to be different
The modern vanity that amazingly became so much more
When one simple thing gets published
Somerset Home magazine worthy junk... x 3!
My stencil's 15 min of fame... and a little chit chat
A ladder laundry room shelf for Country Woman Magazine
Facebook Pinterest Twitter Instagram RSS