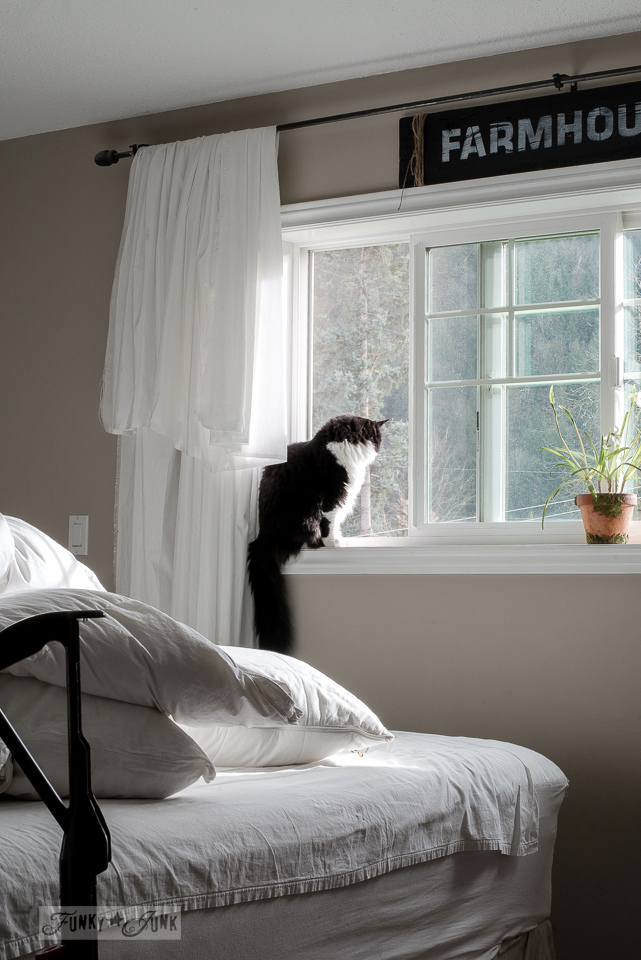 Last week my son moved into his own apartment. So huge!

While I was doing a few dishes (heh), I noted he only had 2 plates.

As I stacked them into the cupboard, I found myself saying, “Wow, with only 2 plates you’ll be needing to do dishes after every meal!” Well now, if that isn’t genius in itself…

After glancing around the rest of the rather sparse-by-most-measures surroundings, it really wasn’t sparse at all. Everything just fit. There was no over abundance of anything. It was functional, and it made his place look bigger than it actually was.

Once I got home, I had Christmas decorating on the mind, however as my eyes scanned my own well lived-in surroundings, my house already looked overwhelmed without one extra thing in sight!

And that’s when I knew I had to pare down. WAY down, before I even attempted to pull out anything additional.

I’ve felt claustrophobic this past year with too much of anything, becoming a junk minimalist of sorts.  I’ve needed to see clear surfaces and  ‘single things’ as opposed to grouped things so they can shine on their own. 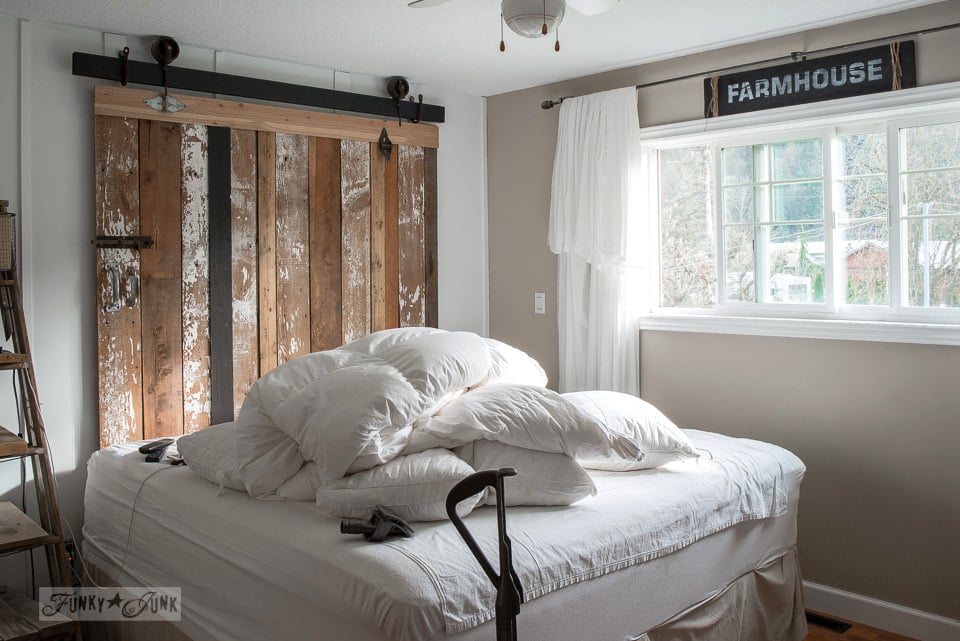 I started with the master bedroom. I think I picked this room because I had surface cleaned it before I left on vacation, so I knew it would be a quicker fix. Instant gratification at your service…

First up, all the bedding was sent into the laundry room. 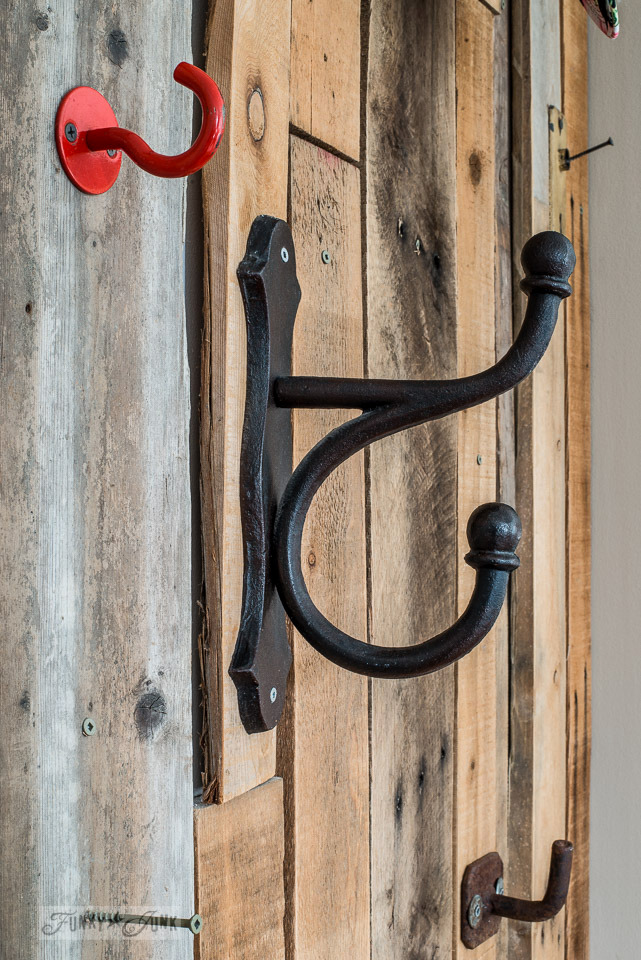 Then every single cluttery corner got gutted. I had a huge TV box still stashed between the bed and wall I forgot about. And then there was that farmhouse light still in a box crammed into the ensuite.

Once everything was out out out, I could start to see the flaws in the room, such as this board that was pulling away from the pallet wood wall. 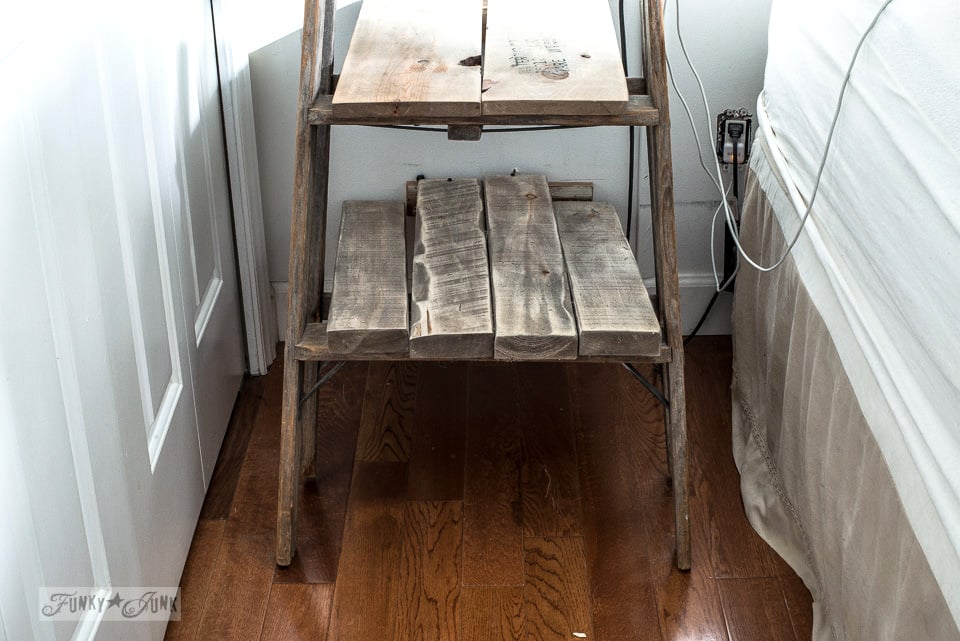 And the dropping boards on the ladder night stand.

Boy this room needs repainting. Next year for sure.

Funny how much we miss while living our everyday clutter-filled lives.

Even stripping the bedding down helped. It forced me to look beyond the piled up pillows and duvet, to potentially see other fabrics and layered blankets come into play.

And find my glasses… and cat. 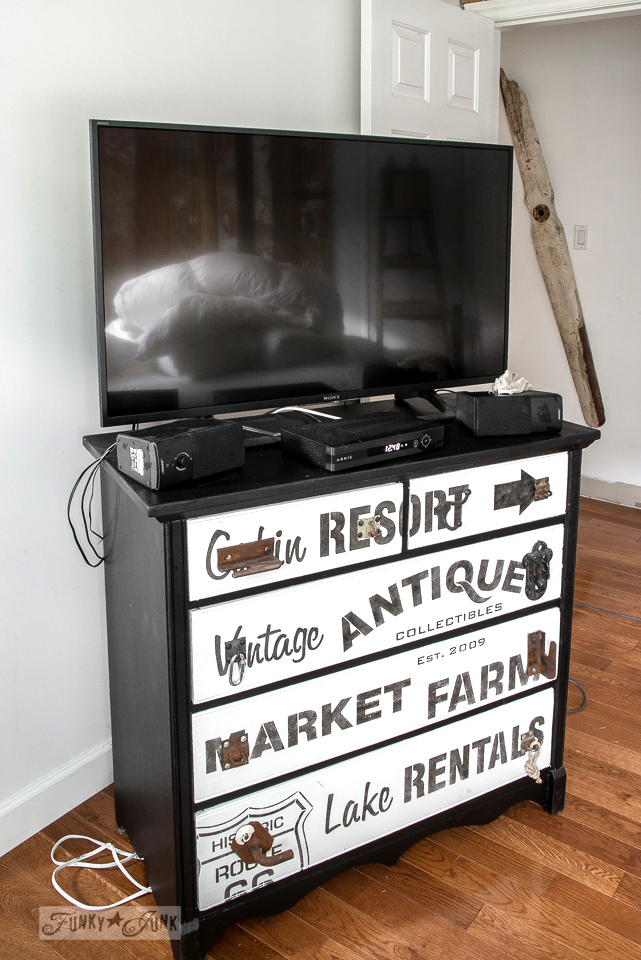 Then every spec of dust underneath the TV subway dresser and bed got vacuumed. Windows washed, walls wiped down, doors scrubbed, cobwebs knocked away.

If you tell yourself to ‘touch every surface’, you will see so much more.

Next, the bathroom got hit, then living room. Gut, clean, rebuilding.

Only then did I feel I had actual permission to haul the Christmas tree upstairs. I even got it lit!

After my little cleaning fiesta, I was ready to drop, so I rewarded myself with an easy crackers, meat, cheese, humus and grapes dinner (did this a lot during my travels).

While watching Stranger Things. Totally hooked, I might add. For those curious, I’d regard it as more creepy than scary. 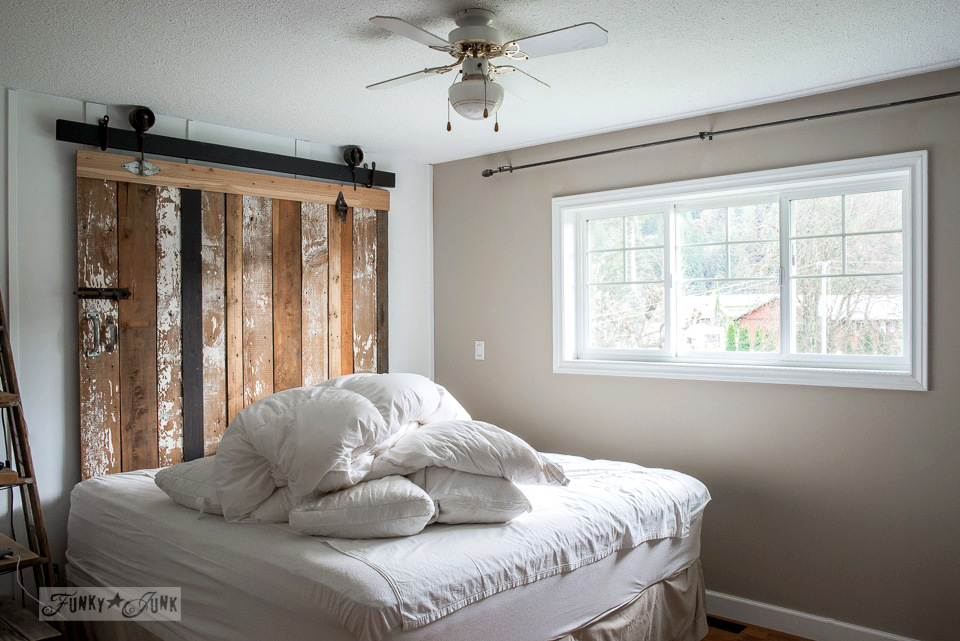 Upon waking up the next day, the first thing I noticed was how striking and vibrant everything was in the bedroom. It was like ‘contrast’ and ‘clarity’ were cranked up. With no dusty out of focus, everything had a brand new vibe, and I actually felt like I could take deeper breaths.

Kinda like in my kiddo’s apartment. That day, I had been jealous of his new living-smaller life. My goal this past year had been to get to that place, and will continue on in the new year.

So if you’re also feeling a little overwhelmed what’s to come over the next month? I suggest to pick a room, any room, then GUT, clean…

… then build up the new improved potential with fresh eyes, and allow the season to unroll at a controlled pace.

Do you clean before Christmas or generally deal with it after the fact?

How to clean pet hair from puzzles
Cleaning accessories and valuables (and windows) Wk 8
How to purge your clothing - wk 2
Purge and clean your homes challenge! Are you in?
Why I'm storing dry goods in a kitchen pantry with containers and bay leaves.
How to spring clean the outdoors with pressure washing tips
Facebook Pinterest Twitter Instagram RSS

17 thoughts on “Back to bones cleaning before Christmas”