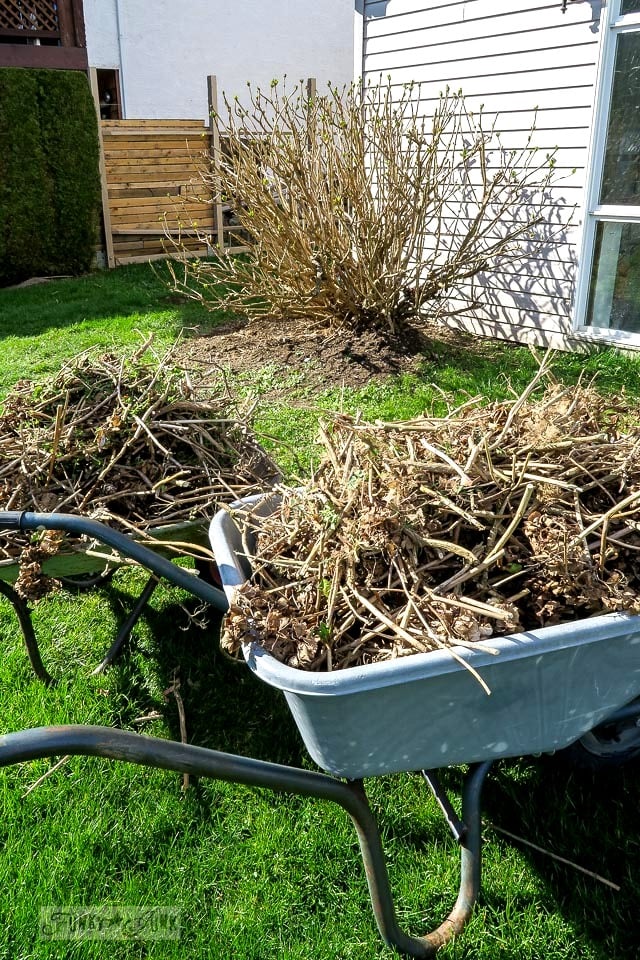 Wish your hydrangeas bloomed more? It may be the way you are pruning them! Learn how and when to prune hydrangeas for the maximum number of blooms each summer!

We’ve been having a few pretty nice days this spring! One was so warm, I could have sworn it was an early summer day.

So I wandered outdoors with my AM coffee, fully knowing what was ahead.

The lawn even needed mowing! Goodness… I was hoping the mower would even start.

However before feeling completely overwhelmed, I decided to start slow… and head over to the most prominent focus at hand. 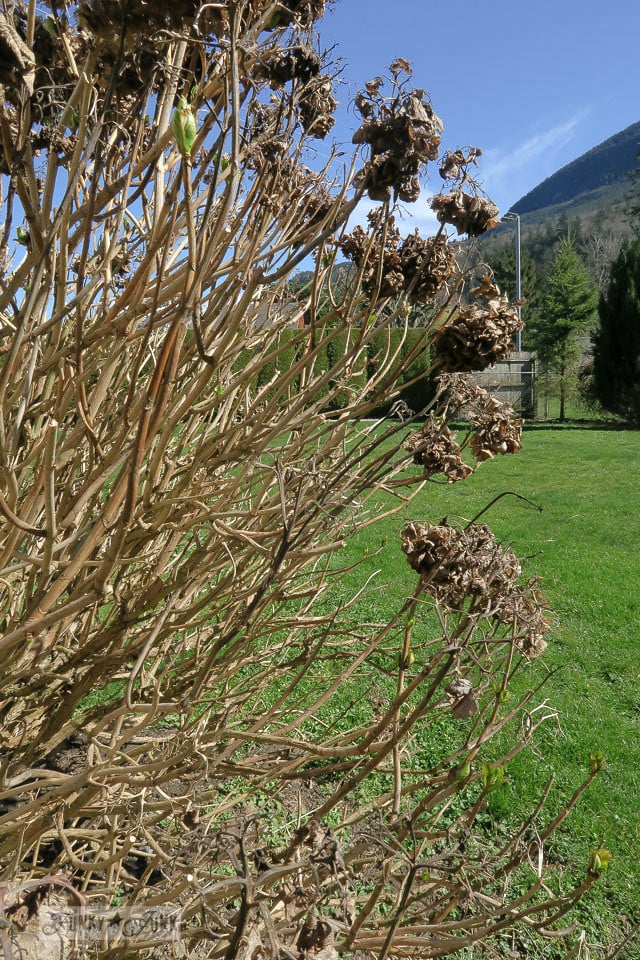 The hydrangea bush needed some pruning as all the flowers were long spent.

It was time to clean this up and prune it right!

But it’s already spring. And there’s a bud showing! Is it too late to prune hydrangeas in the spring? Should they have been pruned in the fall instead?

When to prune hydrangeas to achieve the most blooms may come with the types of hydrangea, so it’s best to check a local source with a clipping of your own if you want to be sure.

However, from my own findings, I have found early spring is the perfect time to prune spent hydrangea flower buds to achieve the most blooms from the previous year. Here’s how and why.

This post contains some affiliate links in which I earn a small percentage from qualifying purchases through these links, at no extra cost to you. Thank-you for helping to support my blog!

When to prune hydrangeas

to achieve the most blooms

Supplies you will need: 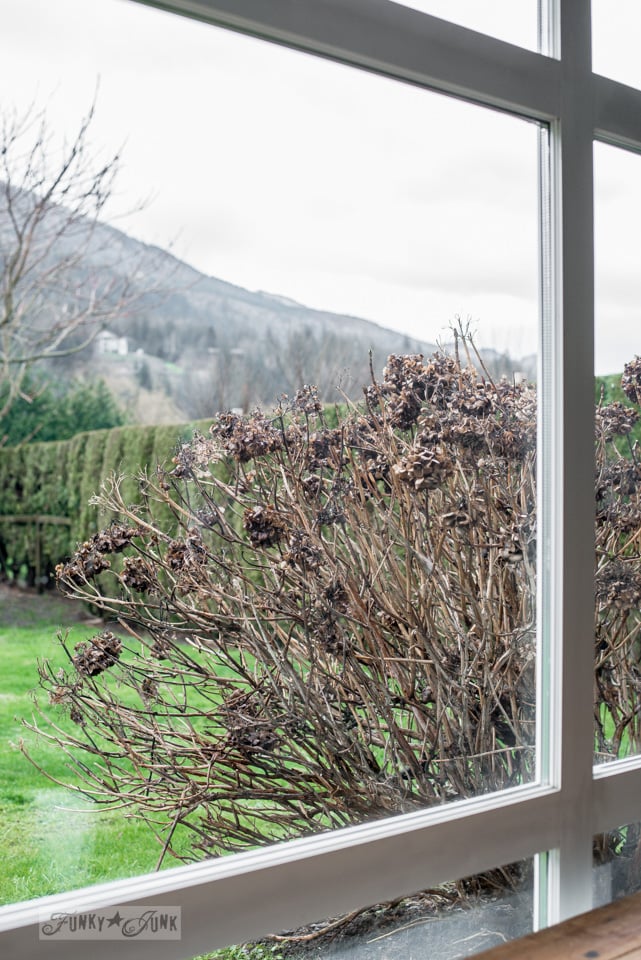 When is the best time of year to prune hydrangeas?

Hydrangeas can be pruned right after they finish blooming. In fact, many do prune them at that time, when they cut the blooms off to display them inside or to shape the bush before the next growing season.

Theory states, next year’s blooms will be on new wood, so one should cut out the old branches, but leave the new shoots.

Since I like leaving hydrangea flowers on the bush well into fall due to their best flower drying harvest time, I suppose you could say I do some pruning in the fall in that way. However, I leave the majority of the pruning until spring. Until the new buds start to form.

I don’t prune to resize the bush. In fact, I’d like the hydrangeas to grow as large as they want!

I prune just to deadhead. The less you prune, the more blooms you will ultimately get.

So let’s walk through the four seasons and I’ll share how and why waiting to prune until spring makes a difference. 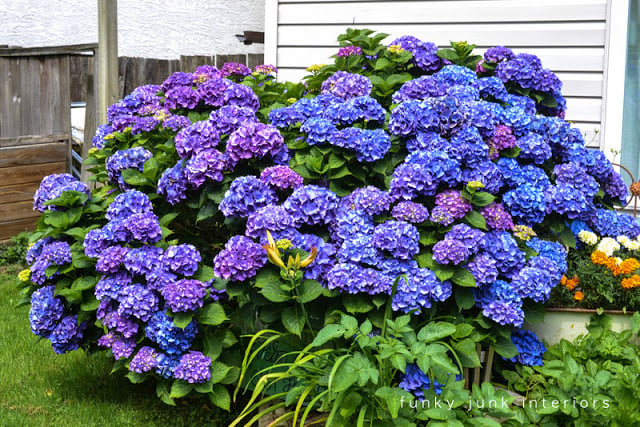 Here is a shot of my hydrangea shrub during summer. This gorgeous bush with very abundant clusters is taller than me. I never feed it nor water it. I feel the success of this hydrangea is the way it is pruned.

The new growth and flower heads are always so abundant, you can barely even see leaves.

And by all means, if you wish to bring a few fresh cut hydrangea flowers indoors to decorate your home, please do!

However, it’s important to NEVER cut a full blooming hydrangea bush back hard. Allow it to do its thing proudly all summer long. 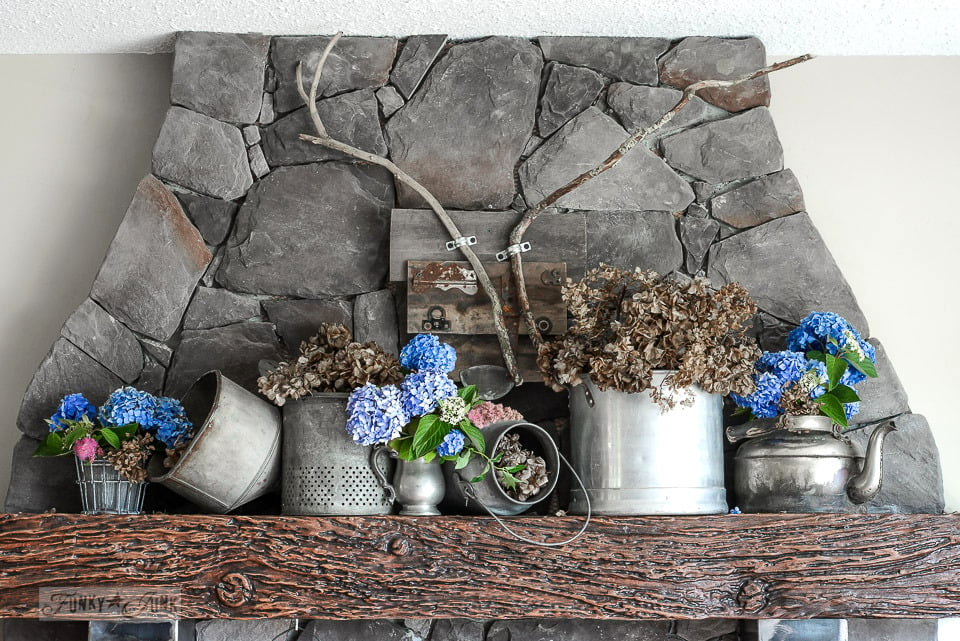 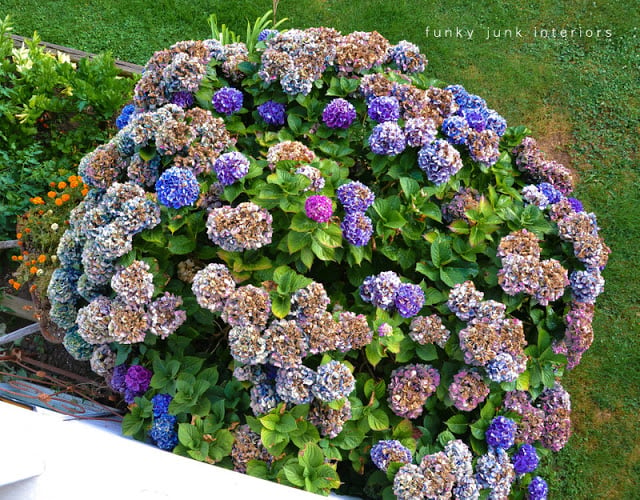 Here are the same hydrangea flower heads in fall around September.

The petals are starting to get crispy, which is the best time to dry hydrangeas for long lasting blooms year around!

So I cut the flowers I wish to dry, then leave the rest on the bush.

Learn how to dry hydrangeas HERE so they don’t wilt! 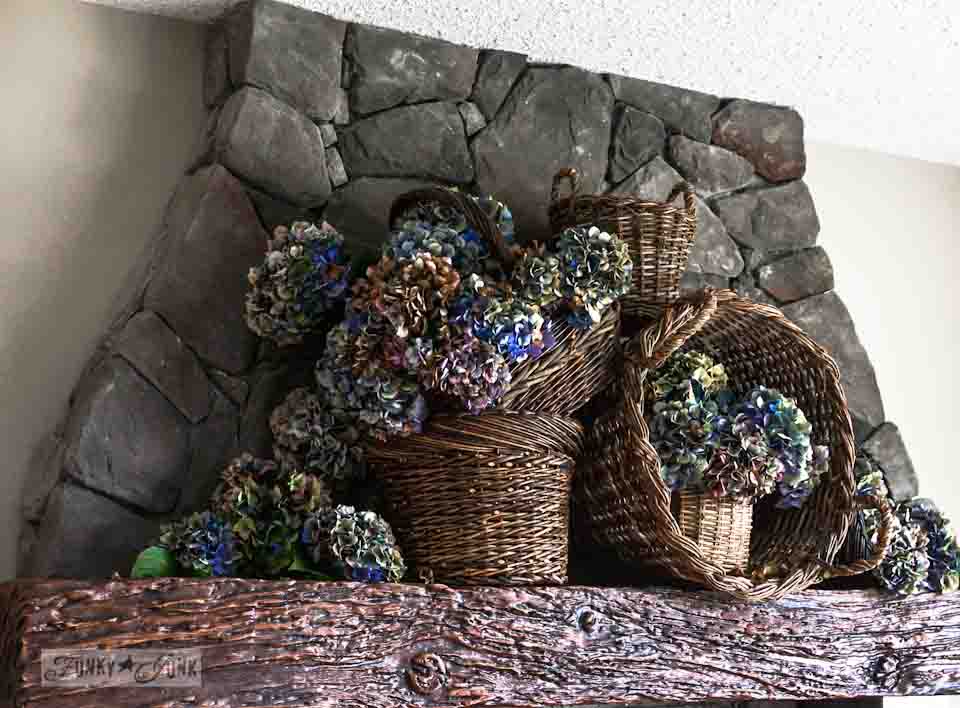 Fall hydrangea blooms often wear multicoloured shades while they age and make spectacular showings in vignettes indoors. And of course, this is their best time of year to be cut to dry too! 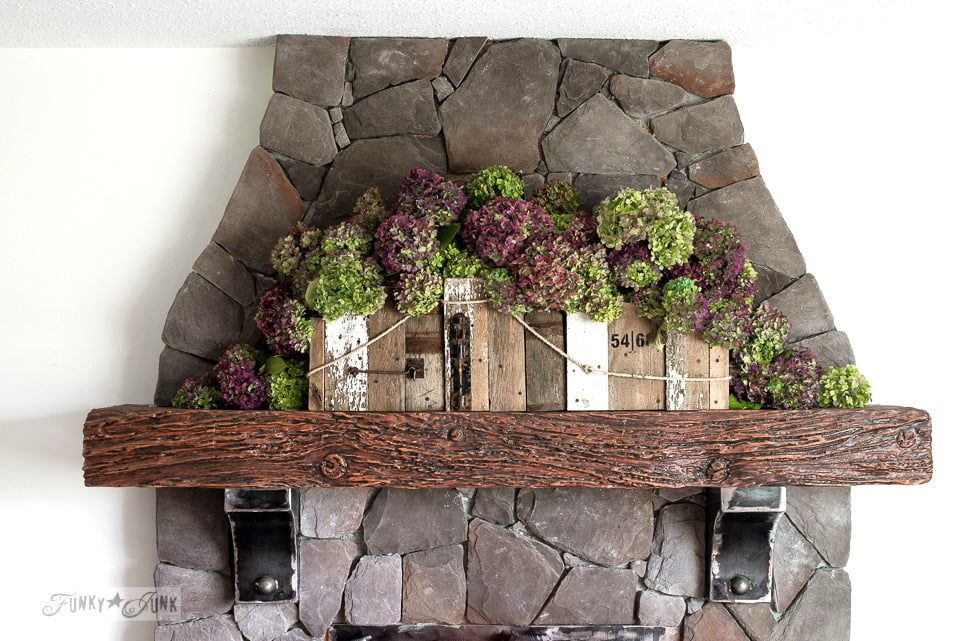 Can you believe the lime and burgundy hydrangeas came from a blue bush? It’s hard to believe isn’t it?

This is how my hydrangea looks in winter. All the flowerheads are completely brown, being LONG past their prime. Plenty of frost and winter has hit these blooms. 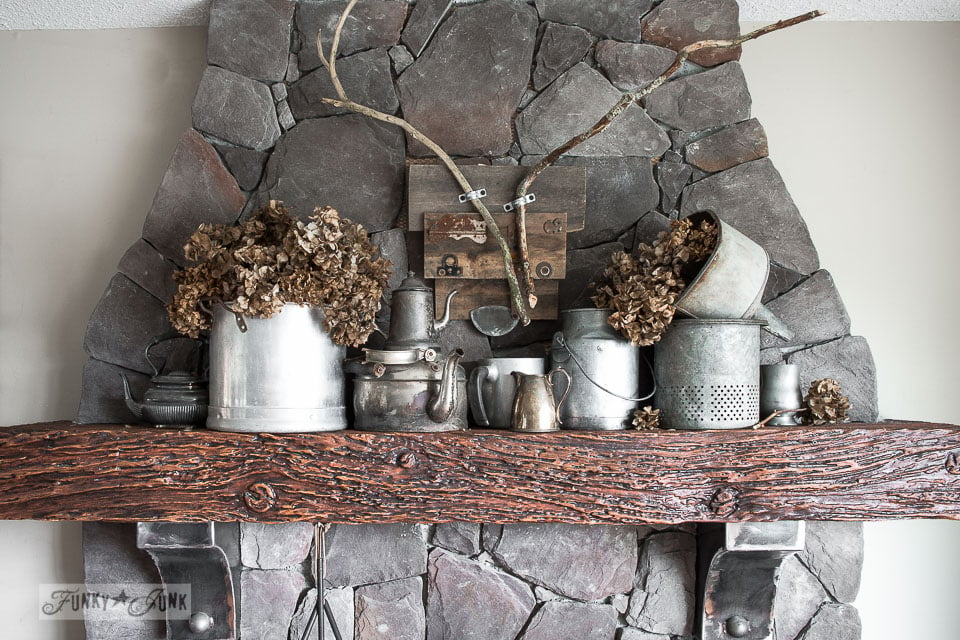 And yes, I cut some old blooms during winter as well to decorate with, because the flower buds are spectacularly neutral and add a very special texture to your displays. 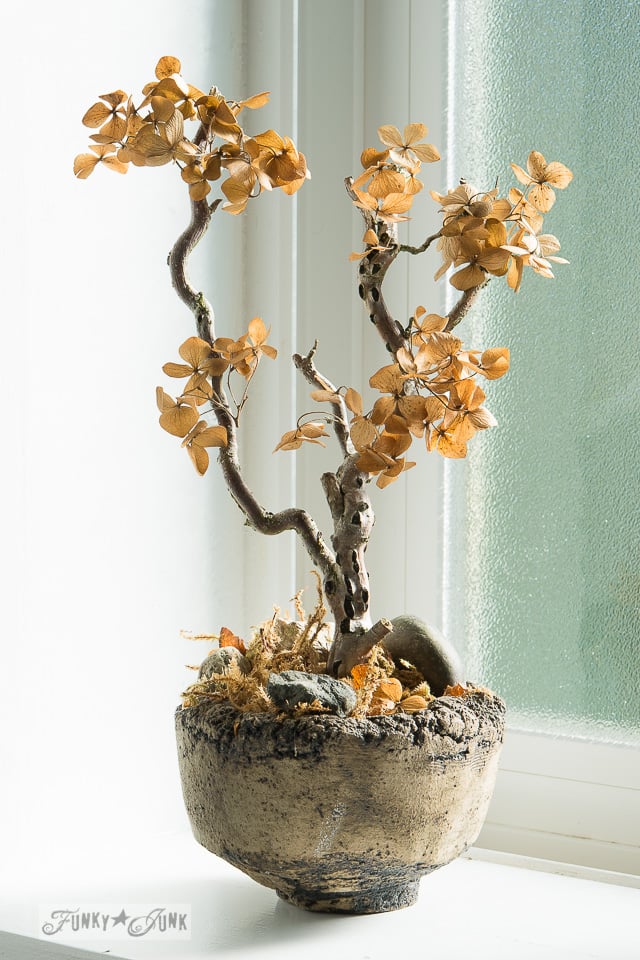 These are hydrangea petals glued onto branches from another plant! 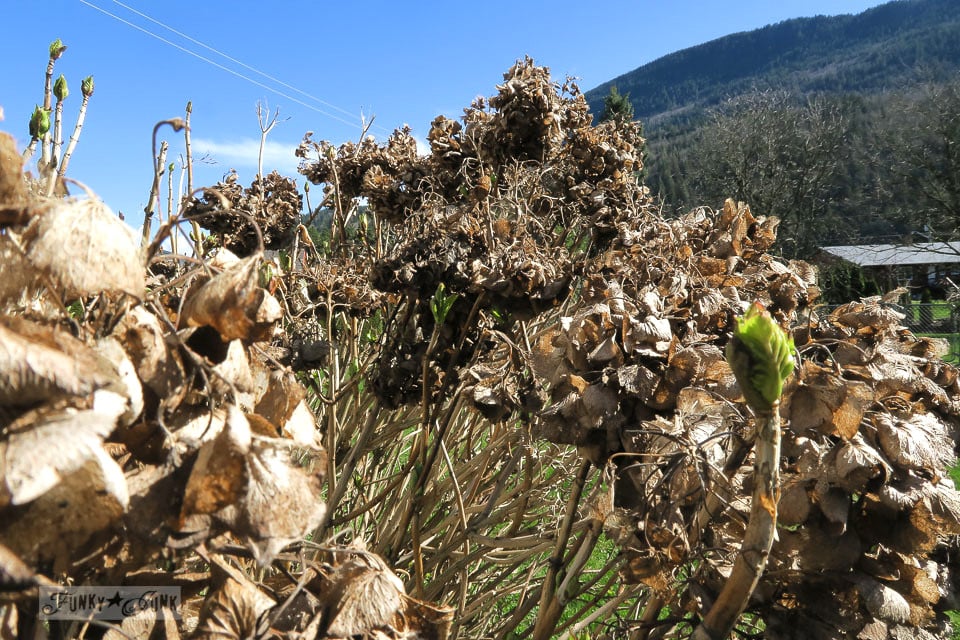 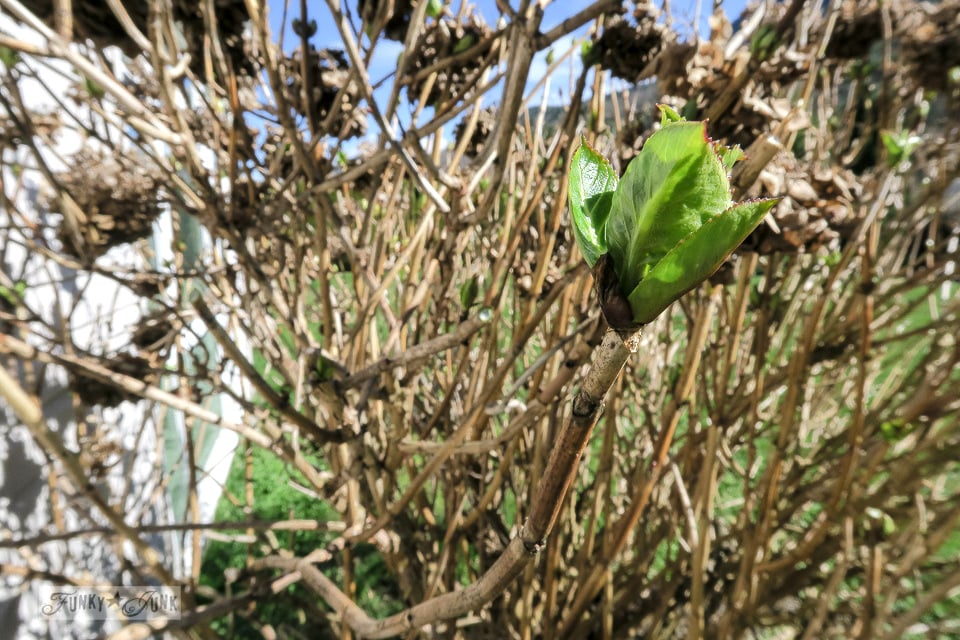 However, the bonus on waiting to prune until spring? You can spot exactly where to cut due to the new buds.

The new buds forming are from last year’s growth you didn’t cut off, which will give you this year’s flowers.

The fresh buds will become the current season’s growth, and provide a gauge where not to cut. I always cut up to a bud. But never cut the bud off. 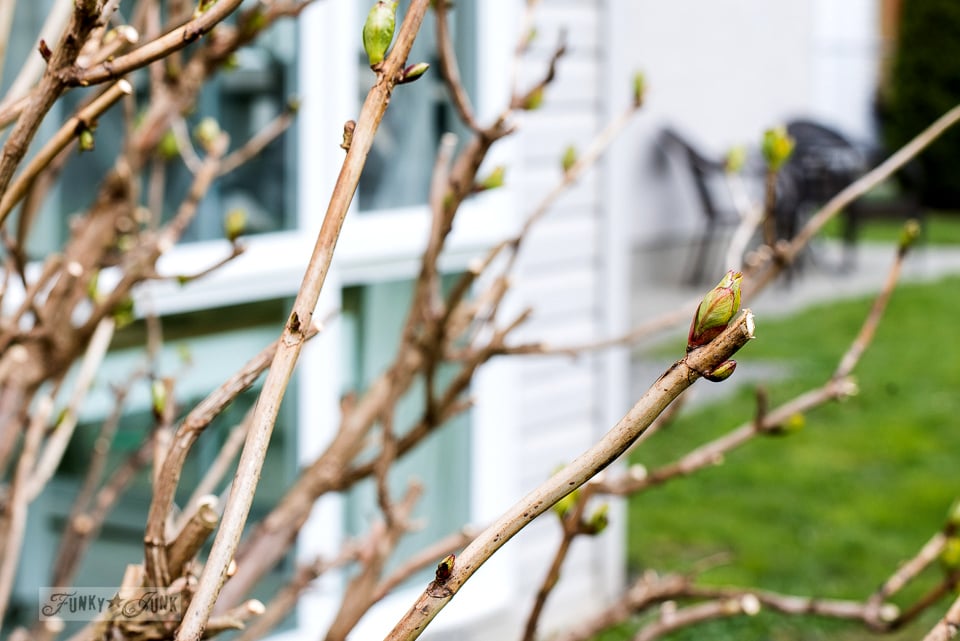 How to prune hydrangeas

Generally speaking, I’ve found hydrangeas to bloom much better if I don’t cut the oldest canes back hard.

Some hydrangeas bloom from old wood. I’ve also read that cutting them to the ground will produce larger blooms.

However, my findings are from my own trial and error. I flat out do not prune hydrangeas until I see buds form in the spring. And my bush has never failed me yet. 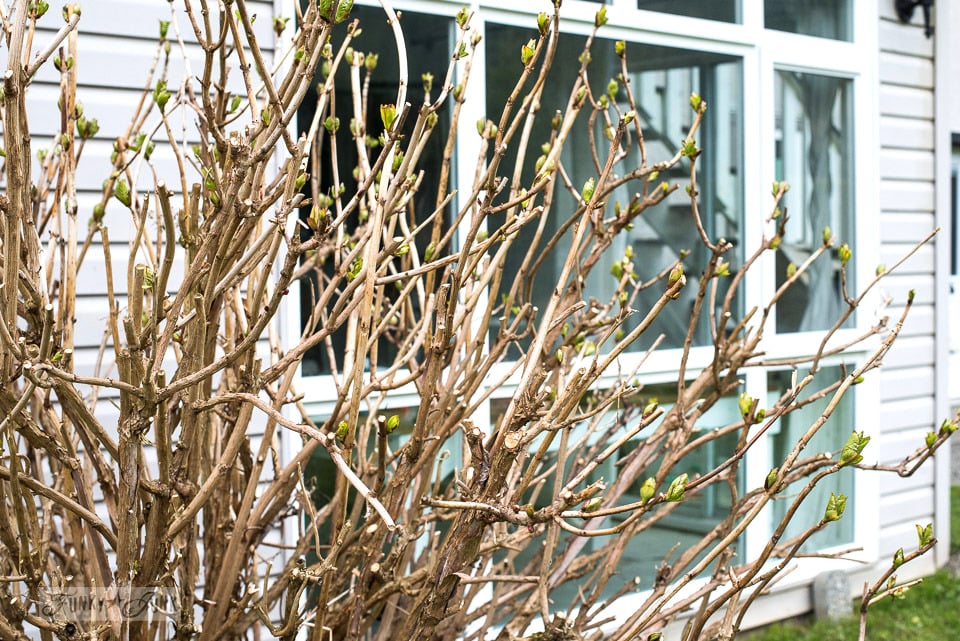 Should all the dead branches be cut back?

Some experts may suggest to do some drastic pruning by cutting out all the dead growth inside the hydrangea bush.

But I vote to leave plenty of crossing branches behind.

When I really cleaned up all the dead wood one year, I found the heavy abundant blooms really struggle to not hang super low to the ground. The dead wood inside the bush provided a built-in garden trellis of sorts, which supported the flower heads. Once they were removed, the heavy flowers lost their support and looked like they needed tying up.

So I now leave plenty of dead branches intact inside, so there’s loads of support when the flowers are in full bloom once again.

Here’s the new cleaned up bush! Some dead wood is left intact, while all the old flowers have been cut down to the first bud.

The hydrangea bush is now fresh and clean for the new growing season! And I haven’t cut one bud off I shouldn’t! 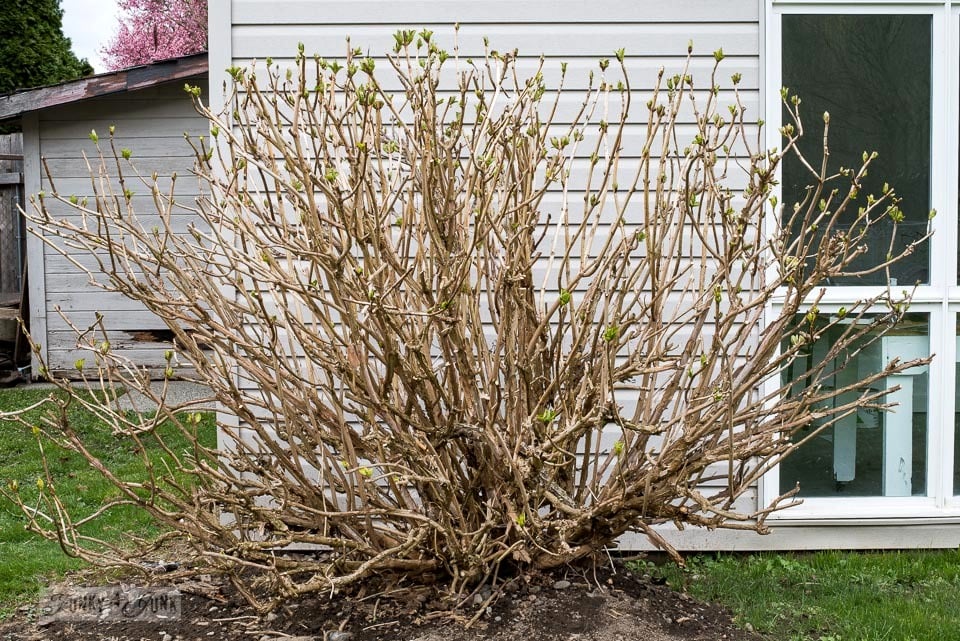 The bush is pretty much the same size, however I do slightly shape the bush so it looks visually pleasing too.

A few buds may be sacrificed for this, however I don’t overdo it. I’d rather have more flowers than a perfectly shaped hydrangea bush. 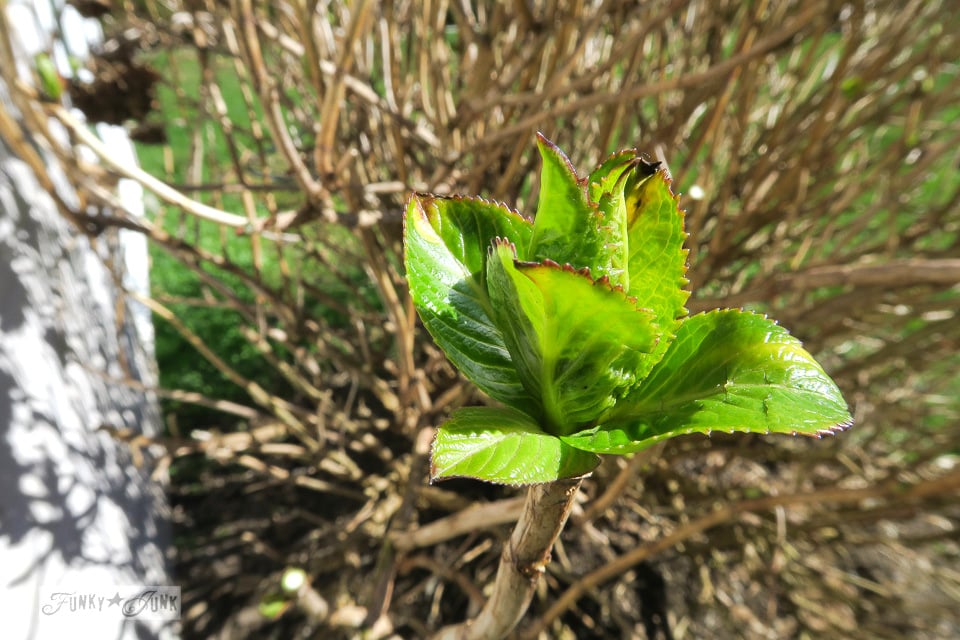 Pruning hydrangeas in late spring may not be the official proper way, however you certainly can’t argue with a bush that loves to bloom! So this is what works for me on the West Coast of British Columbia.

When do you prune your flowering bushes? What yields the most blooms for you?

Hydrangeas in buckets on a ladder stand

Hydrangea mantel all in galvanized buckets

44 thoughts on “When to prune hydrangeas to achieve the most blooms (with project ideas!)”