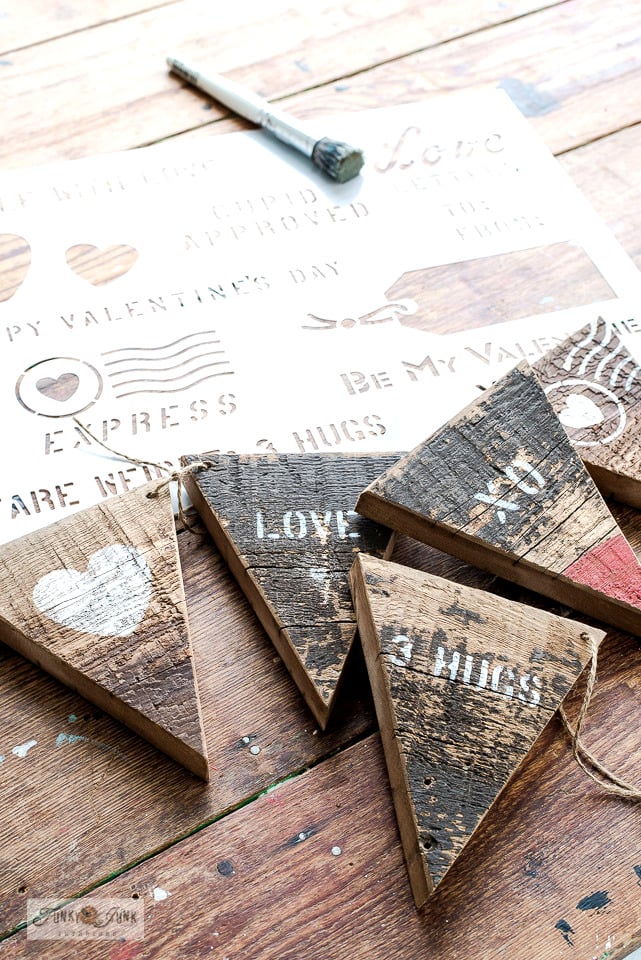 True to tradition around these parts, I love making things for Valentine’s Day, but in my rustic style.

Hmmm… what to make…

And that’s when I dreamed up a reclaimed wood Valentine’s Day banner! 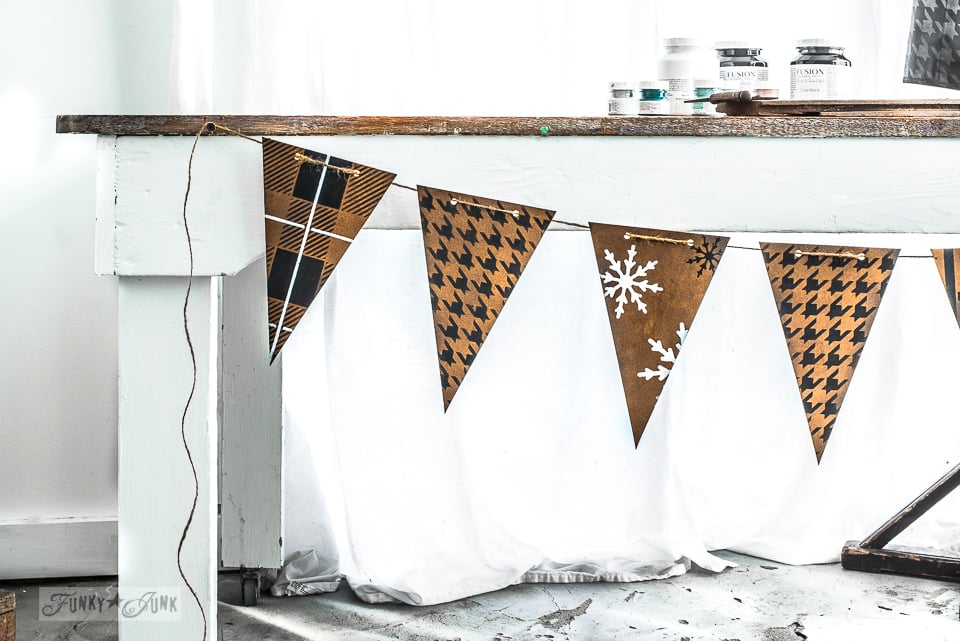 Do you remember the dollar store banner I made while back HERE?

At first, I was going to flip over the cardboard and paint up the other sides.

And I’m confident it would have turned out adorable as the first one did!

But I stalled… I’ve already done this. What can I do that’s different?

And that’s when my scrap wood trees came to mind… 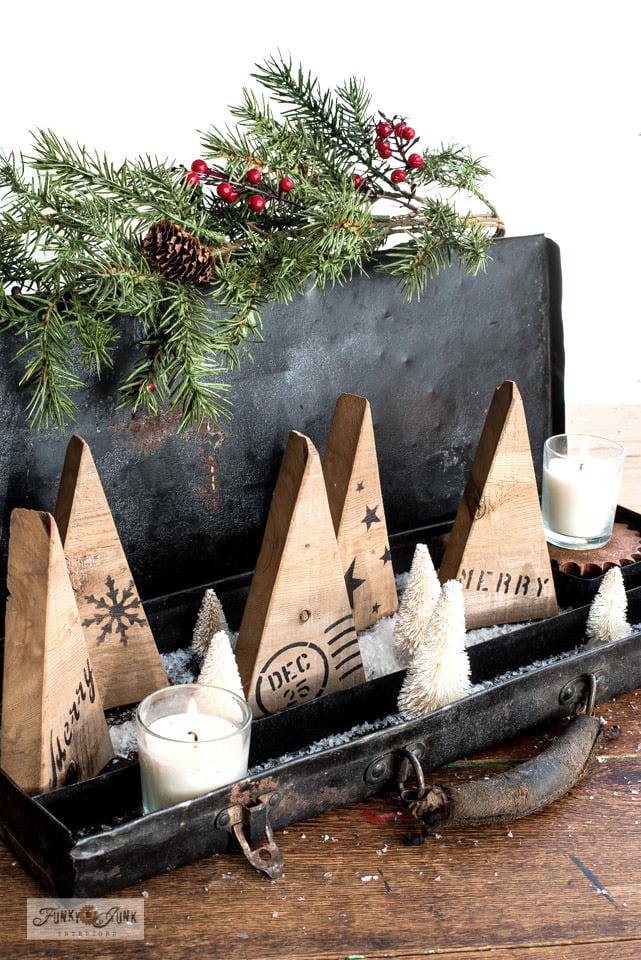 The shape of these trees were relatively the same as the banner pieces, so I reasoned, why not try the banner using reclaimed wood?!

There would be a little weight to it, but if I hung it just so, I didn’t think that would matter.

And it didn’t! The banner ended up turning out totally cute!

Here’s how I made out:

2. The board was then flipped around, repositioned, then recut, and repeated until I ended up with the desired reclaimed wood banner triangles. 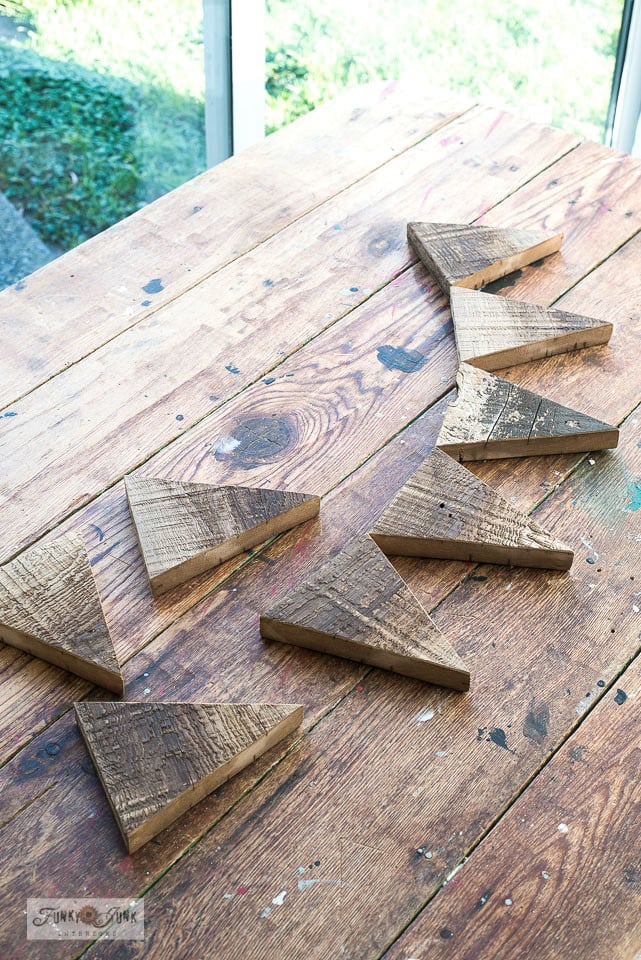 3. Each banner piece received a light sanding with a palm sander.

Aren’t they the cutest?! But they were about to get even cuter. 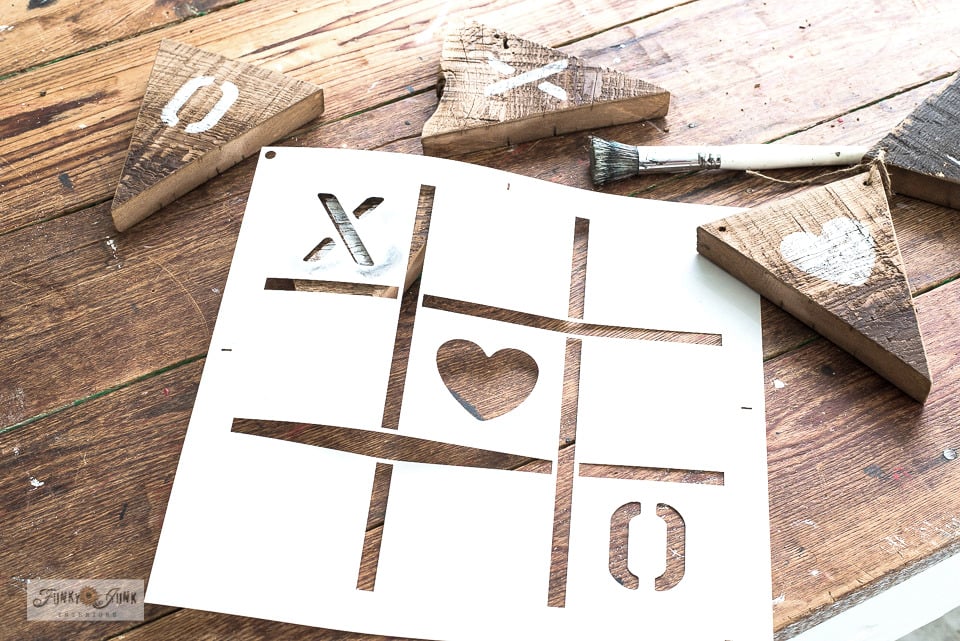 The X, O and heart were stenciled onto random banner triangles as desired. 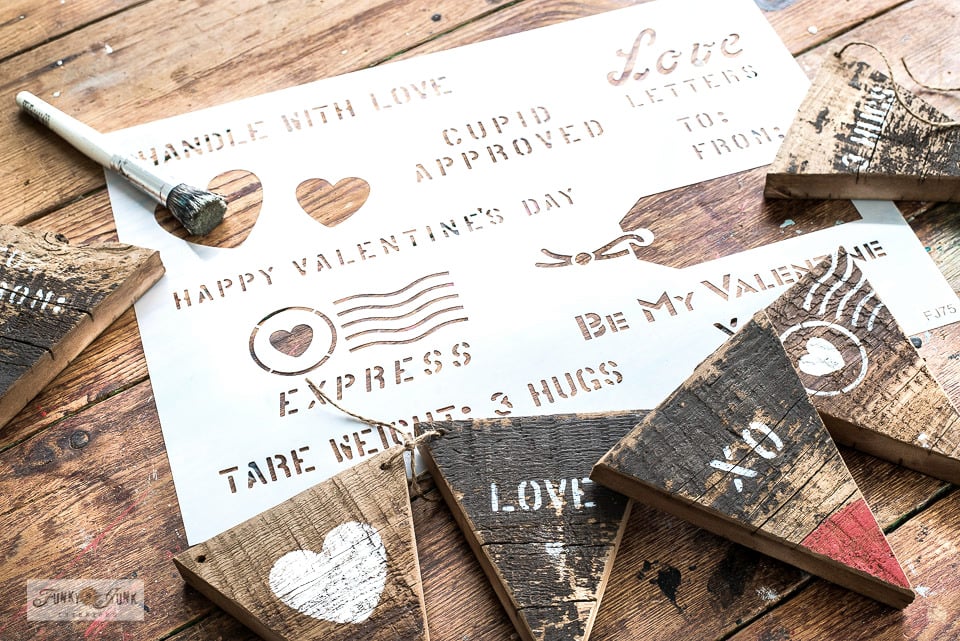 My attempt was to rotate a large image beside a smaller one and repeat so the banner would look visually balanced.

To my surprise, when I flipped some banner pieces over, I loved the tone of the other sides too! They were darker and something red had already been painted on it here and there, so I took advantage of the colour variations and rotated those too!

By the way… the wood for this banner was taken from my farmhouse Christmas tree skirt HERE from last year. LOL

No reclaimed wood is sacred for very long around here! 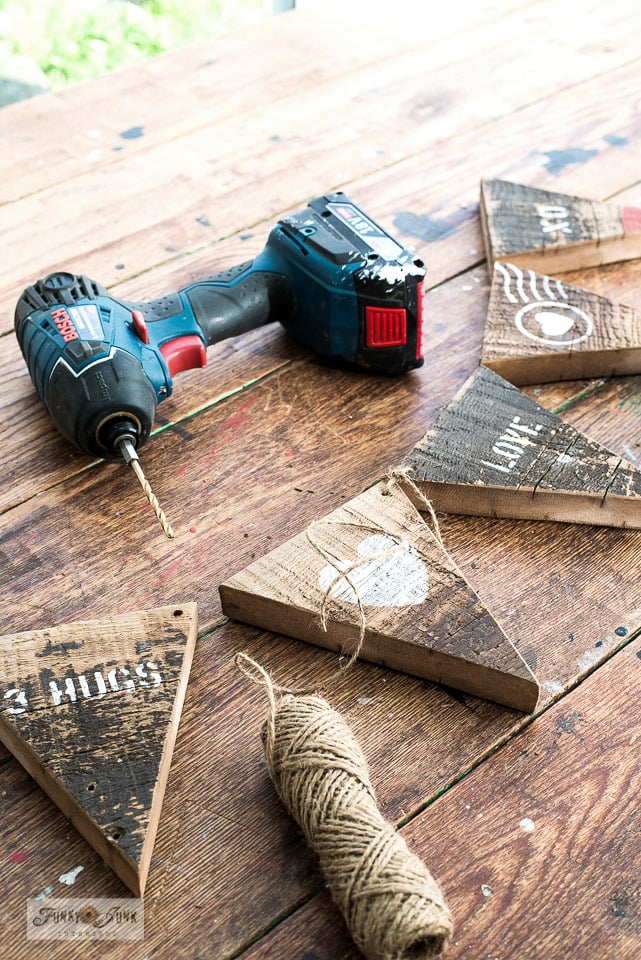 5. A hole was drilled into each corner along the tops of the banner pieces, using a bit just large enough for twine or string to be threaded through.

At this point, I debated on using thin twine… 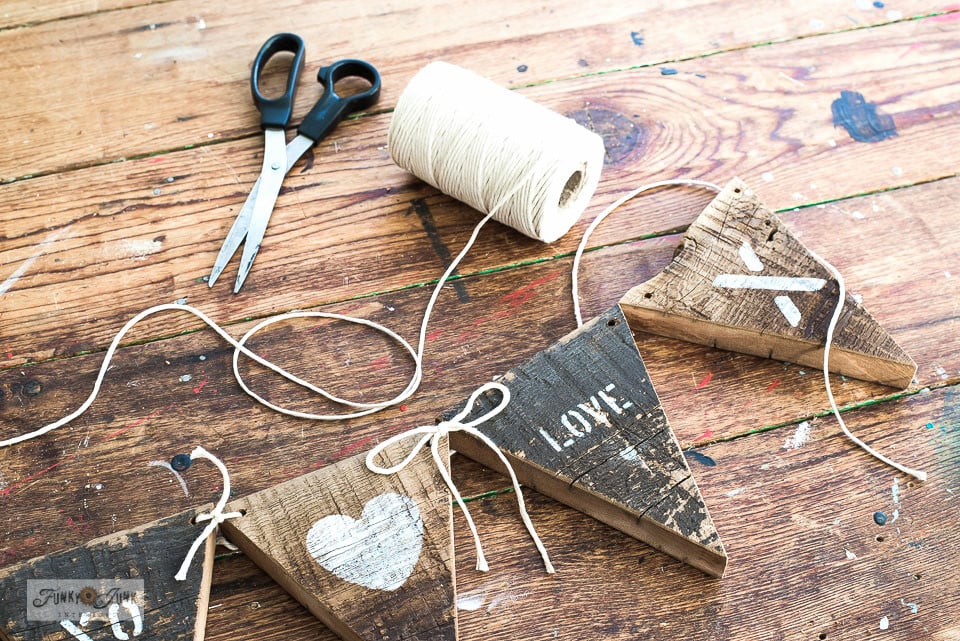 … but ultimately switched out to heavy white string so it would show up a little more. Both options looked cute though!

And another decision… on the left you can see knots, and on the right, a bow…

I decided either would work, but the bow appeared a little more decorative so that’s what I went with. 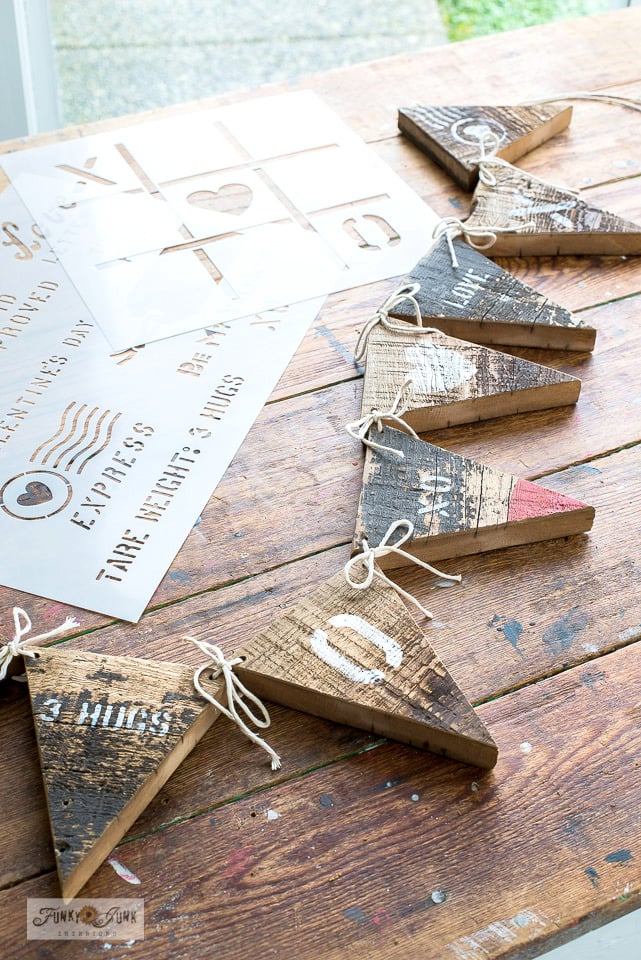 Once all the banner pieces are tied together, this chunky little reclaimed wood Valentine’s Day banner can’t be cuter!

And ready to be hung up somewhere. 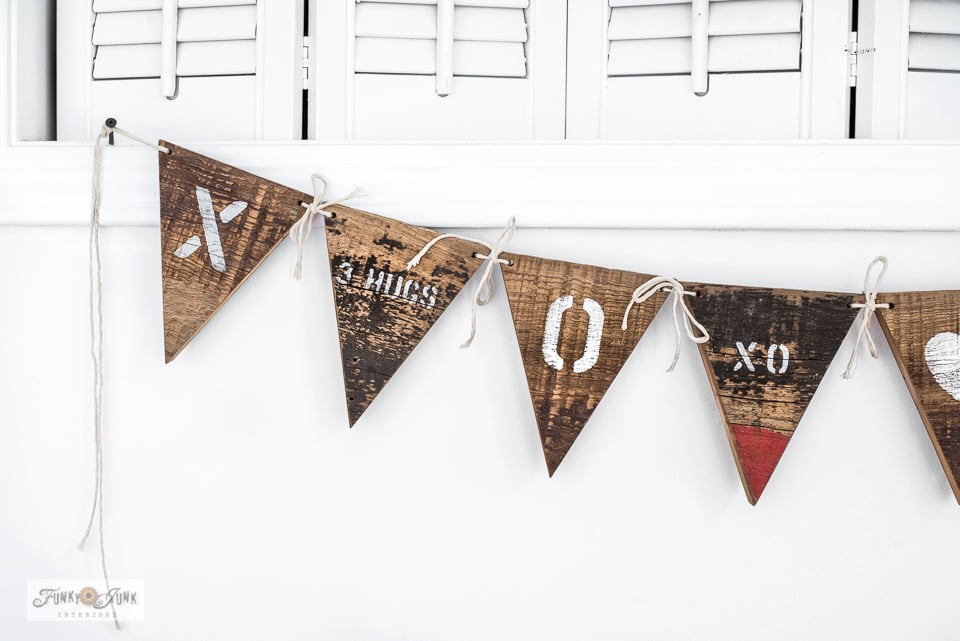 For each side of the banner, a long string was threaded so there’d be lots of tying flexibility where length was concerned. 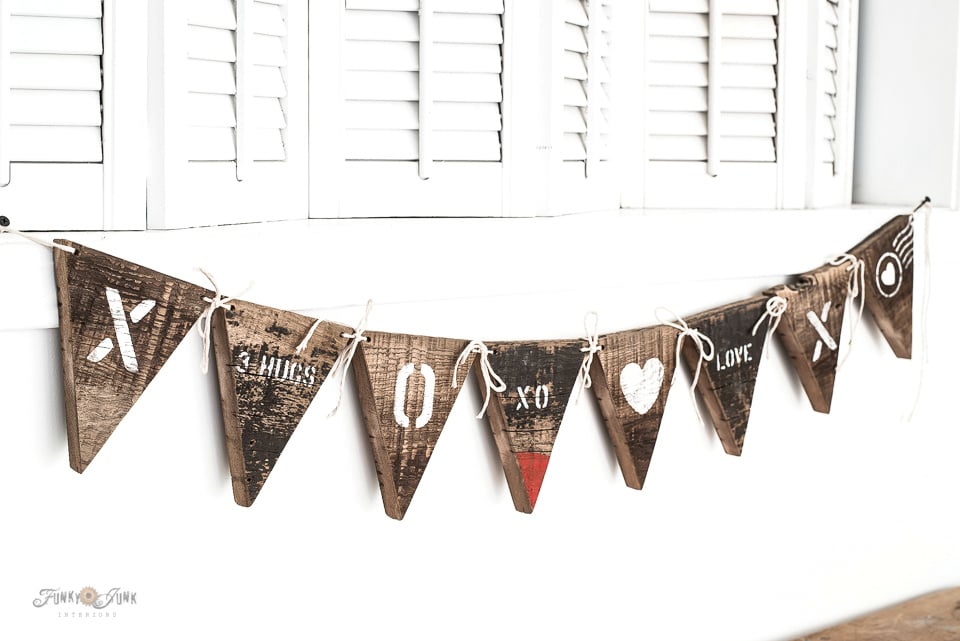 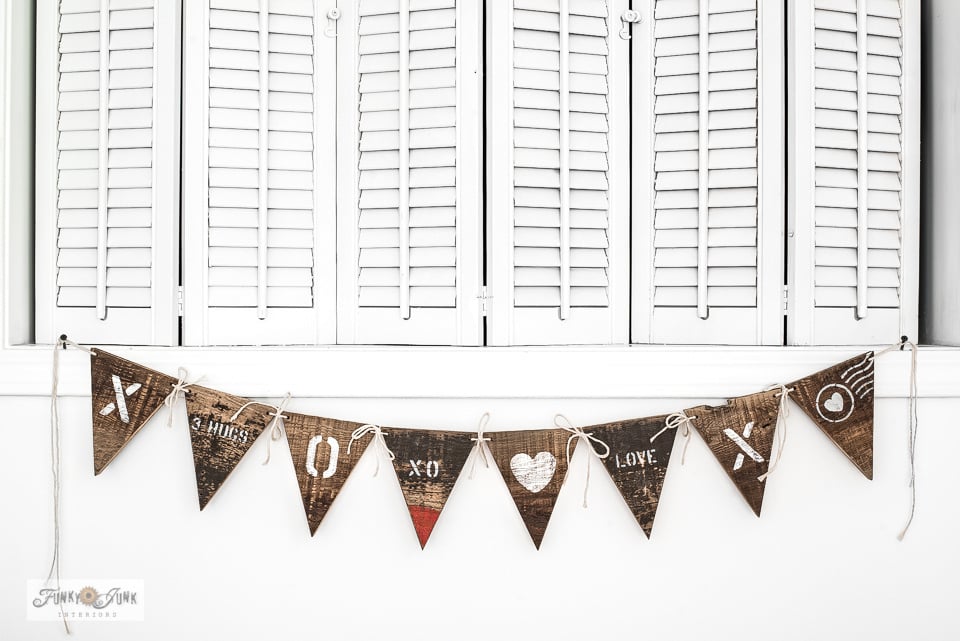 I rather liked the rustic banner hung under this interior window! It’s quite out of the way yet still makes an impact. 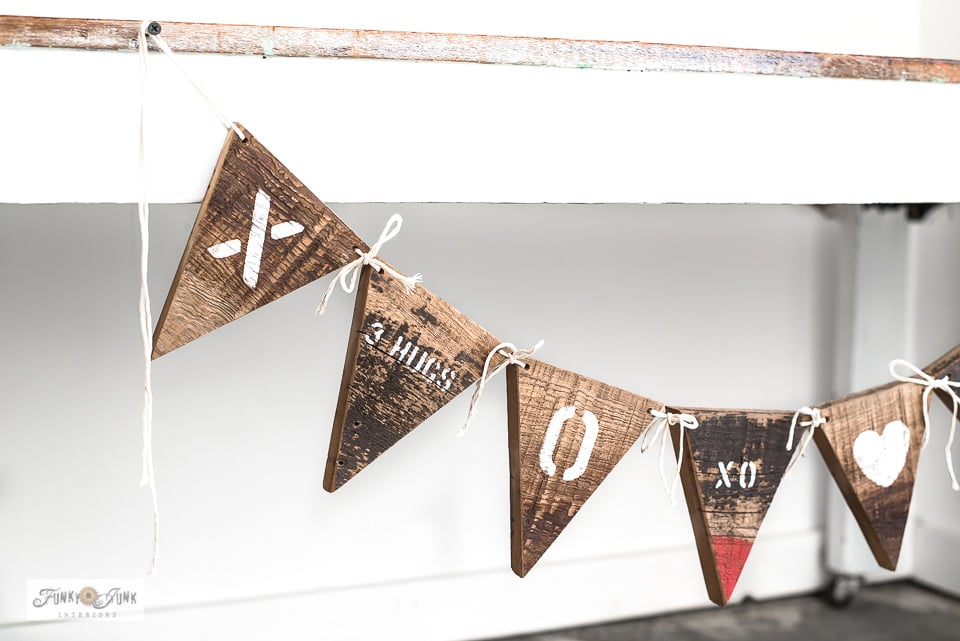 Then I decided to hang it along the edge of the worktable in the photo studio. 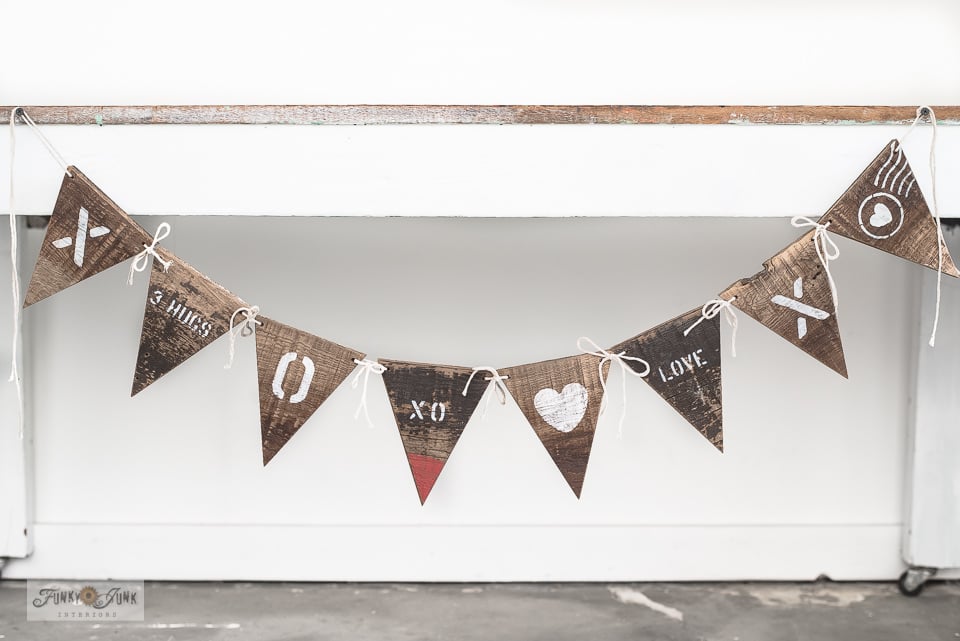 It isn’t going to be hard to find a fun place for this banner!

But I decided to try one more spot upstairs…

At the end of the main hallway is a doorway into the guest bedroom, however the hallway faces a wall before you make the turn.

The spot offers a great visual while you’re walking down the hallway, so maybe there… 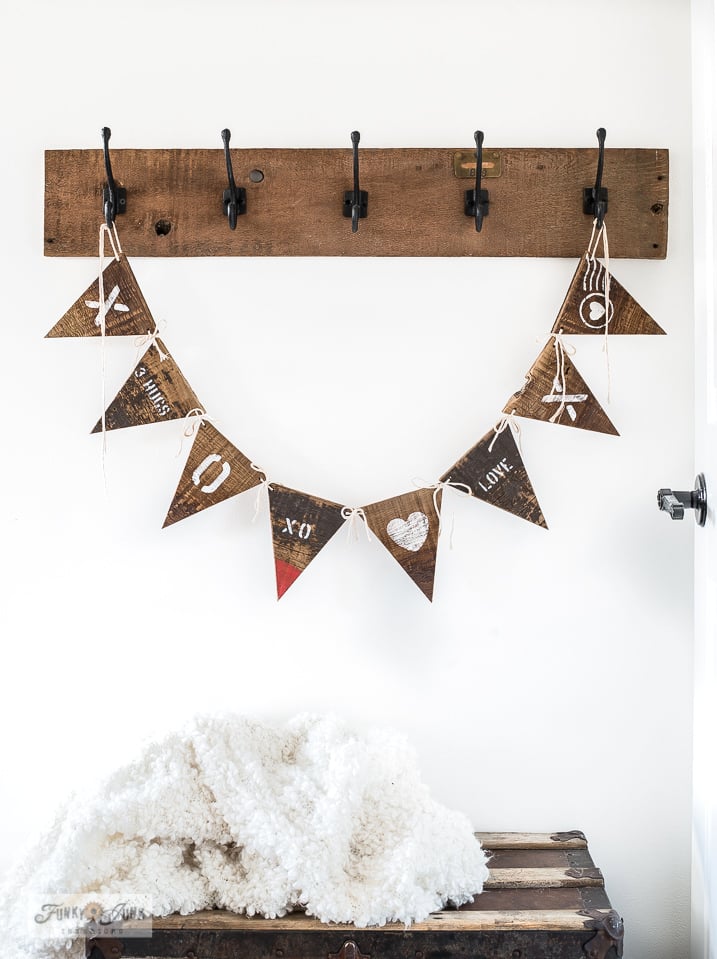 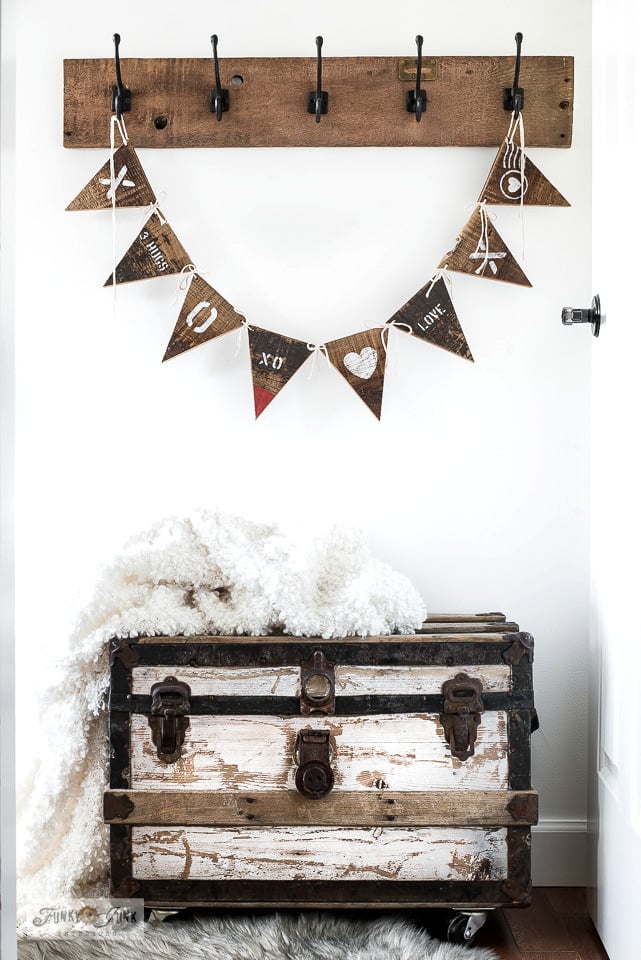 This little spot ended up being perfect for the reclaimed wood Valentine’s Day banner!

What I love about this project is that it can be used for any season in any colours!

I think this banner will be making a return for spring… so those pastels may come out yet!

As long as they are rustic, I think can live with that…

Cute little thing, isn’t it? How would you decorate it up to suit your home?

Visit all my other rustic Valentine’s Day projects HERE