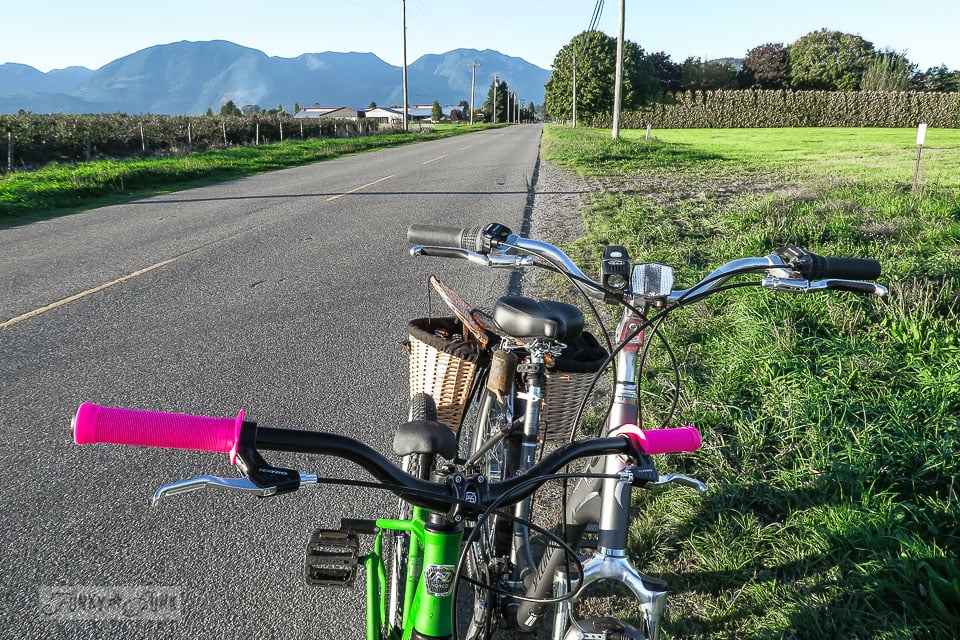 If you’ve been following along my little bike ride adventure stories, you’ll already know how in love I am with this new passion.

First I tested myself. My bike was not cheap, so I didn’t want to make two mistakes!

Since I passed the test with flying colours, there was one more step to make.

And that’s get my son involved. 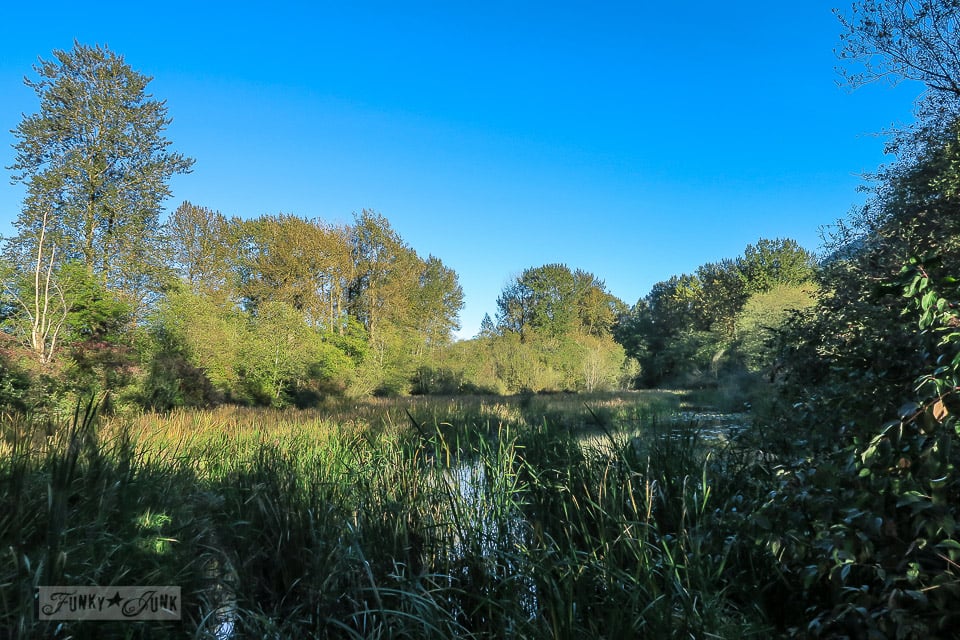 These days he’d rather chat on his phone with his friends. So if this worked, I’d… I don’t know. But I know I should earn something REALLY SUPER BIG.

So I struck up a deal with him.

“I’ll get you the bike YOU WANT, if you come for rides with me sometimes.”

Generous manipulation at its best. 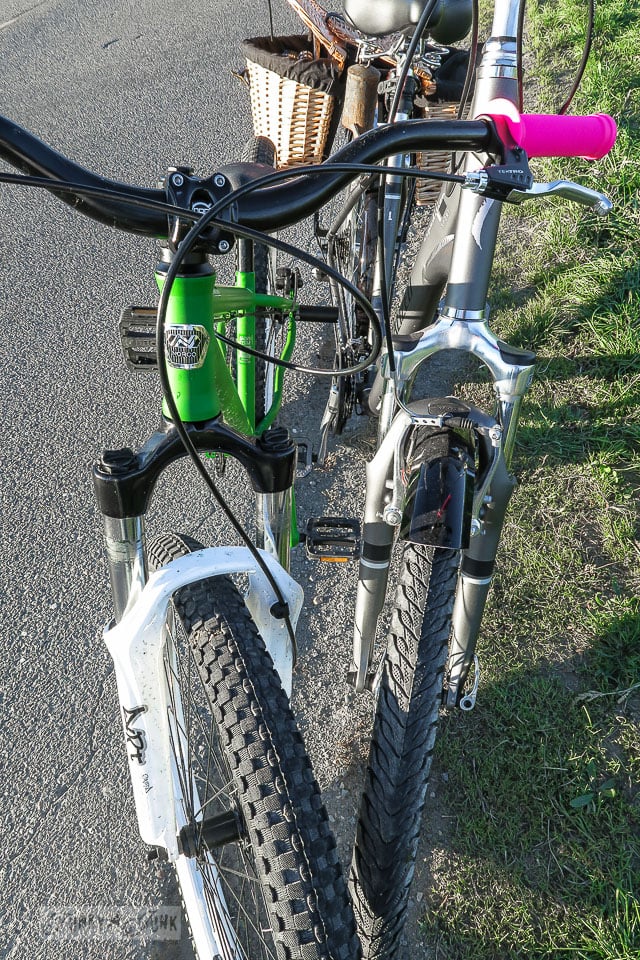 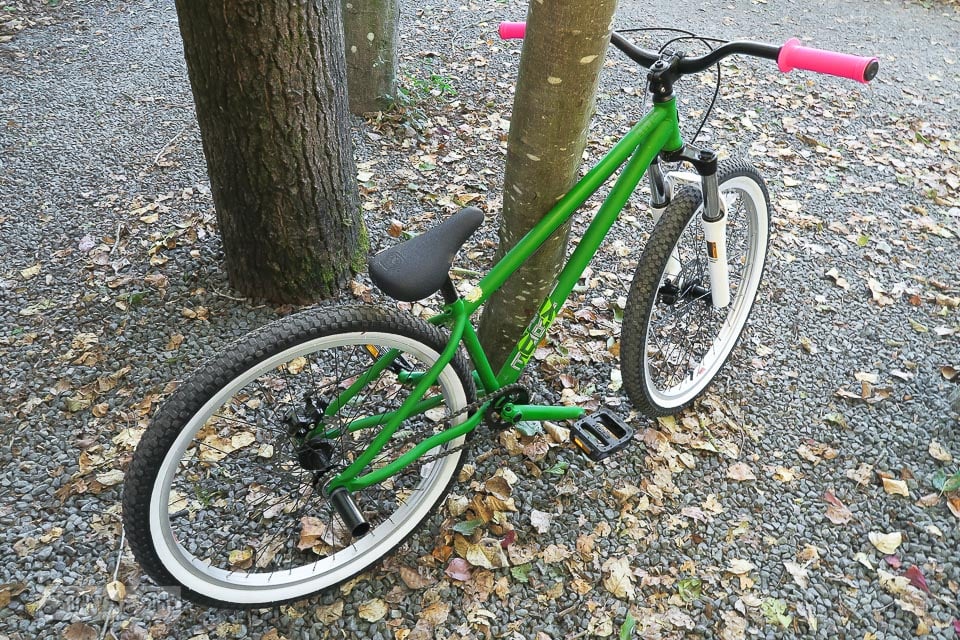 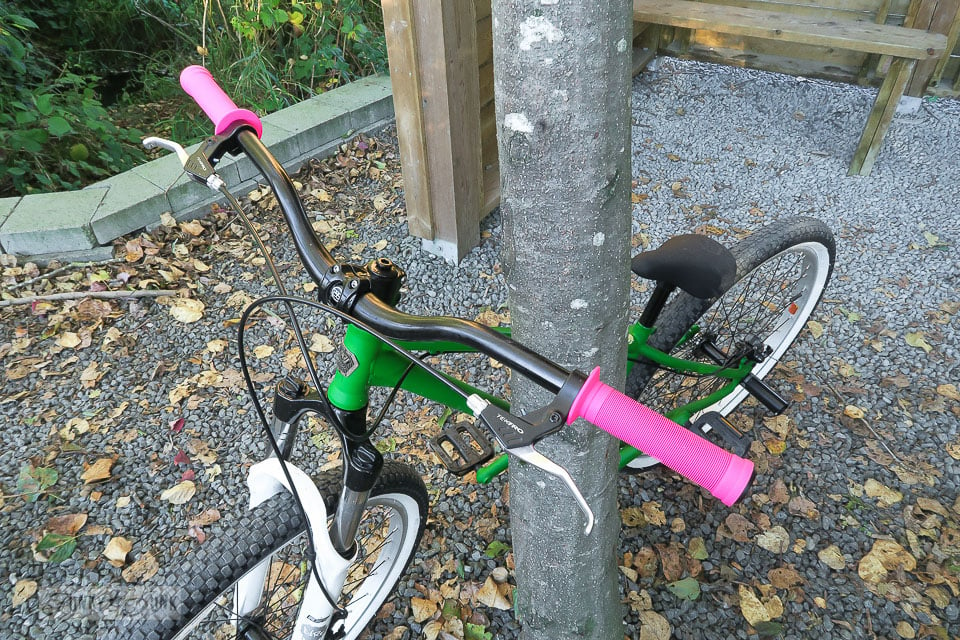 Knowing what a difference a quality bike made in my own world, we went to the bike shop and got him a ‘good one’.

Cody’s bike is a Nordco, which is a cross between a mountain bike and BMX type. I’m sure there’s a proper name for it, but in my world, it’s a low rider green and white, with pink handle bar covers.

It was explained to me in high detail that boys like to ride standing up these days. Seriously? I’d die in 10 minutes! But it appears to be true.

The bike will allow a few tricks at the skateboard park, to pop wheelies and stuff, as well as coast down the road. He’d apparently ruin a cruiser type, and since he didn’t want that anyway, it’s all good.

He loves it and that’s all that matters. Standing up and all. 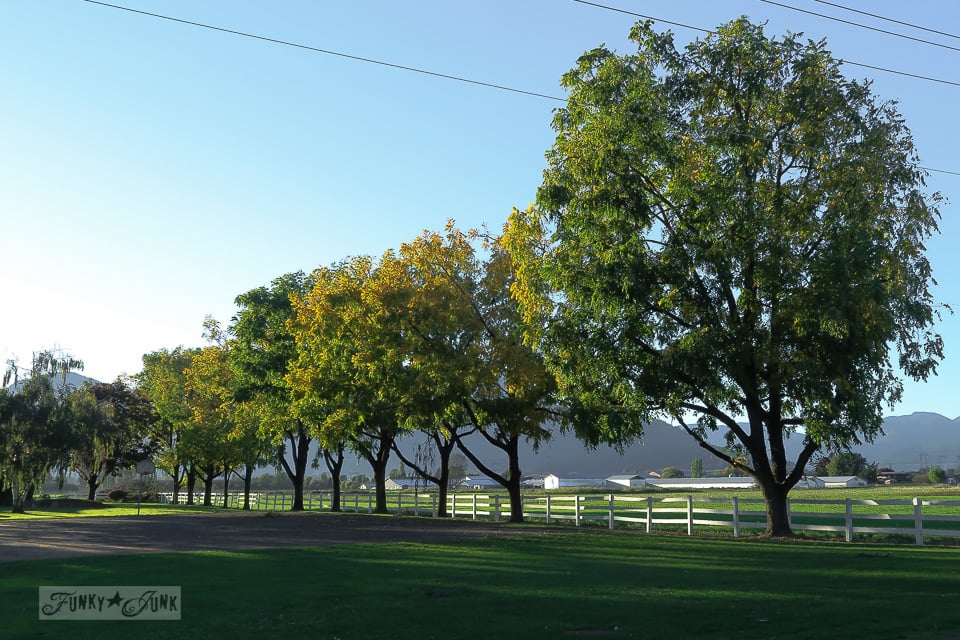 So today was a BEAUTIFUL day, and I encouraged him to try out my fancy train bridge route.

Well, after we ventured outside of the heron reserve, we hit country. And this is where my stomache does weird things. In a good way.

It’s hard to explain what transpires once I coast down the hill from the reserve. The wide open fields are like open arms, welcoming me home. This is the neighbourhood I grew up in, so it’s unbelievably familiar, yet a little frightening all at the same time.

Maybe because I don’t want to get sad? I miss my parents desperately, and being here feels like I’m nearer to them. But it’s to the point where I feel a little anxiety, in a good way. Like, something amazing is about to happen. I can feel it. It surrounds me completely. Like just maybe I could live here again some day kind of amazing. Or something.

So we were coasting along when I looked over to my right, and my heart did a lurch.

“I’m taking a picture!” I yelled up ahead. 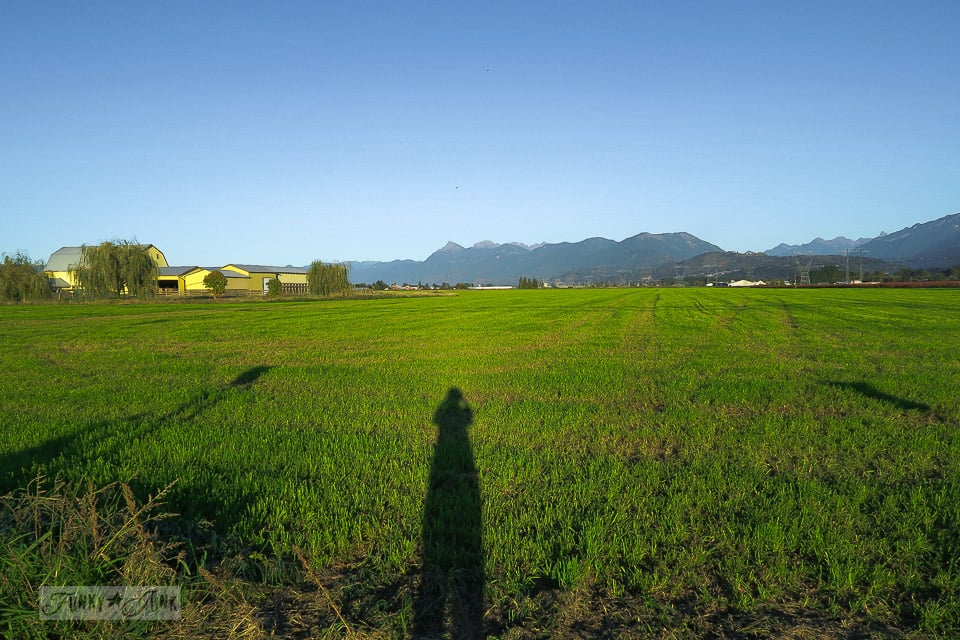 Way in the background? The red just to the right of the yellow barn, is my childhood farm.

This land is my land.

It was so close, yet still too far. But this felt like a safe distance from it. So maybe I wouldn’t cry.

My eyes stung anyway. I yearned to be there so badly.

But I’d NEVER be able to convince the boy to go THAT far. 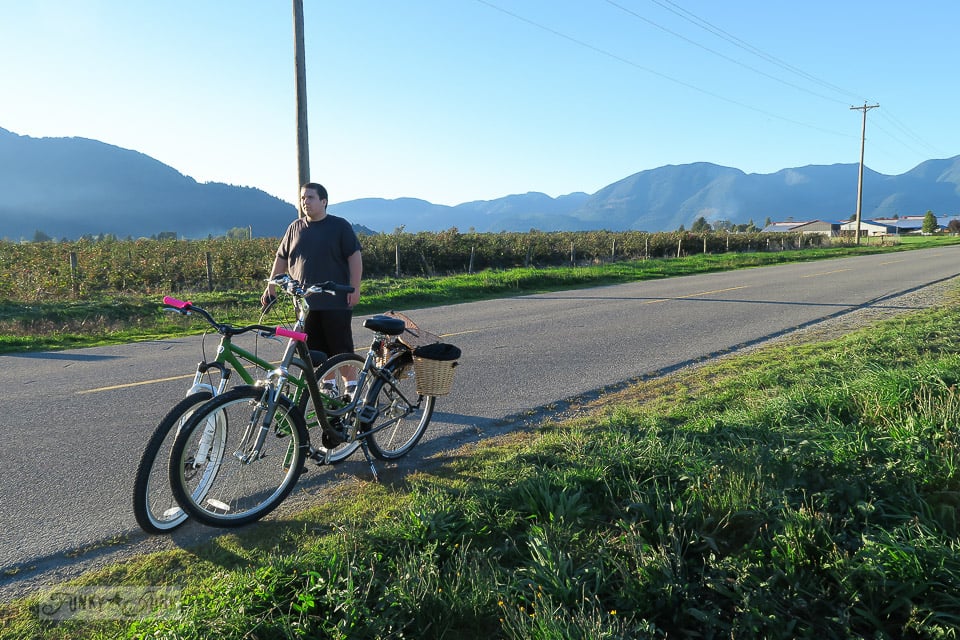 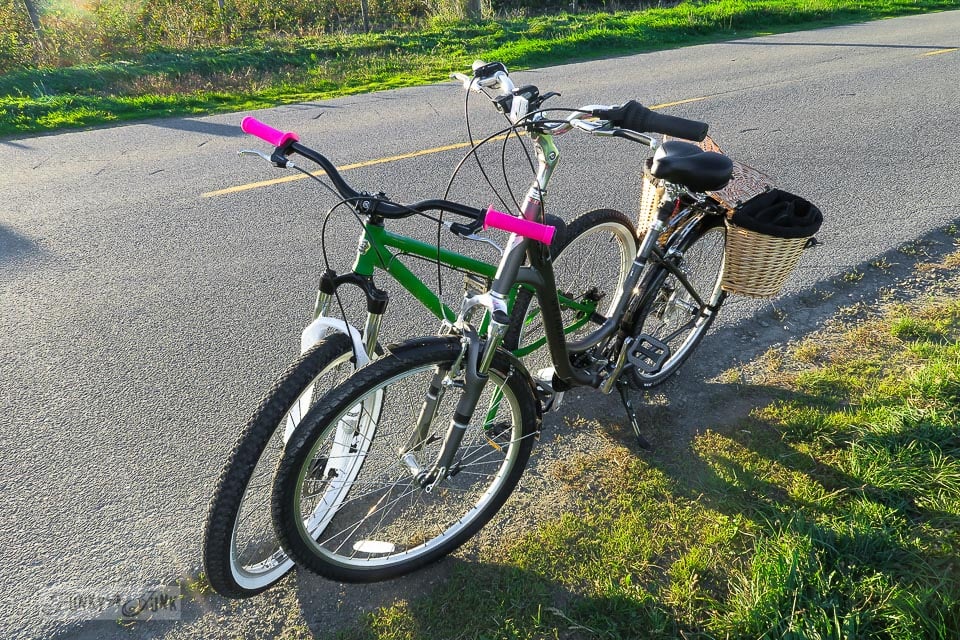 We took a short water break, then we hopped on the bikes again, hoping the nearby store would be open for a coffee and a coke.

I followed Cody’s lead. He’d never been down these roads before, and I was astonished how far he wanted to go.

Which would ultimately lead to ‘the farm’.

Oh my gosh…. I held my breath with every peddle, hoping he wouldn’t realize ‘how far’ it was. 🙂

We ended up chasing the sun. It was starting to set, and we were already in the shade.

How ironic that we were riding towards the only place I’ve truly know as home, towards the sunshine? 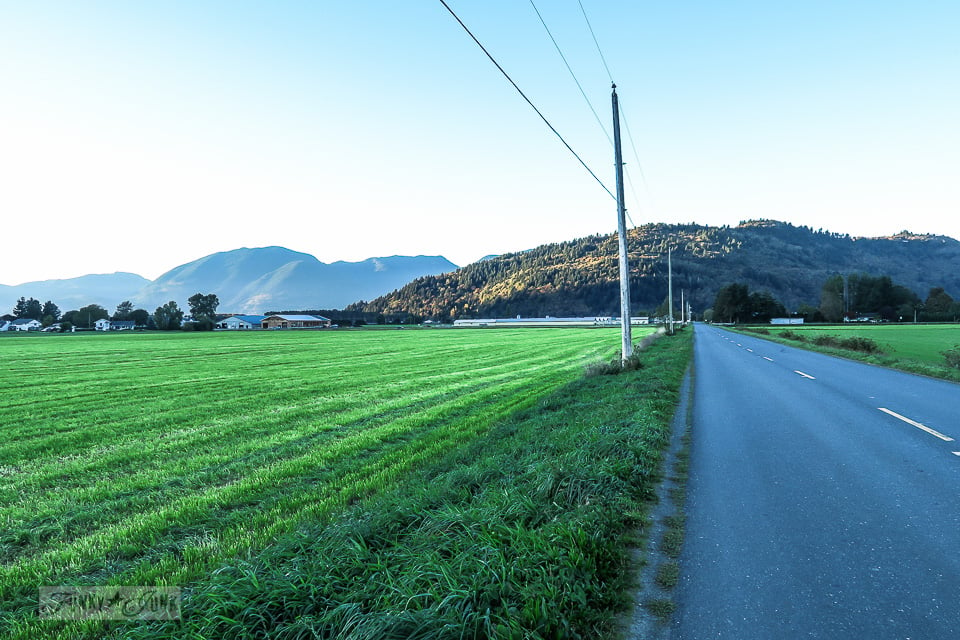 Going past all the familiar houses and farms, my heart felt so full! I’ve wanted to bike all this way but just hadn’t yet. And now I got to do it with my son!

And then we approached the farm. Giddy, as we rolled towards it, my eyes grew WIDE.

Since my mom left the farm, it had gone downhill badly. Two owners eventually ran it into the ground, so it was always so heart wrenching to see again.

But the last time I had been there, new owners had taken over and were doing massive renovations.

But what I saw today, was completely jaw dropping amazing. And I can’t wait to show it to you… coming soon!

I left there feeling REALLY good. But…

What is it about an area or a lifestyle that calls you back? The calling is very loud. It’s been there forever, but got VERY loud after I got home from Maui. It’s hard to explain. But I feel it in every fibre of my body.

All I know is, I feel like we’re being led to something or somewhere completely amazing to the point of I’ll want to cry every second of every day amazing.

And I have faith that whatever ‘that’ is, it’ll materialize when the time is right.

Don’t you love a good story that never seems to have an ending?

Now up!  Part 2 / A major farmhouse reno at my childhood farm

Categories: About me, Family, Rambling, Sights where I live
Tags: bike riding adventures, my childhood farm
32

32 thoughts on “A country bike ride to my land, with a new partner”