It’s been awhile. So while things are ok at the moment where sitting upright in front of a computer screen seems feasible, I felt it would be a good time to share a health update on my recent tooth pulling foot surgery story.

I initially had hopes to share journal style during my downtime, however the entire healing process hasn’t gone as swiftly and painlessly as I had hoped. Most moments are still just better spent against too many cushy pillows in my bedroom, watching happy country scenes from Heartland on Netflix. 9 seasons of it! Highly recommend if you like light and fluffy shows.

So, let’s start at the beginning. I’ll break up the stories in segments so the blog posts don’t get too long.

I am hoping by going into a little higher detail, that some of this info can help you in similar health crunches.

Back when I was in Hawaii this past November, I was chewing on something and felt a sharp jolt in my jaw. I immediately put the macadamia nuts down (heh) and sat in silence, wondering what just transpired. So I felt my teeth with my tongue, and felt a sharp jagged filling threatening to cut my tongue.

I called my travel insurance agent to figure out the right protocol. I’ve always carried special insurance when travelling but have never used it.

Always call your insurance before any next move. You must follow their protocol to the LETTER if you wish for coverage.

This became especially important when I also lost my glasses on the beach. Turns out, insurance would cover it only if I replaced the glasses while still in Hawaii. Talk about a hustle to gitter done…

Next, I made an emergency dentist appointment for the next day, where they filed down the jagged filling until I could get home and get it replaced. Done! Or so I thought.

Once home, I went to the dentist for chipped tooth which resulted in a new crown. However after tapping around all the other teeth, it was discovered that the tooth BESIDE the new crown was the one that resulted in that jolt of pain.

Two issues at once. Perfect.

Being that the painful tooth was an old root canal, I was then sent to a specialist, which resulted in rescue efforts to try and save it. Twice over. In which a throbbing pain was still left in its quake.

Goodness, I was so over babysitting one lousy tooth! But it appears this was only to be the start.

Due to the root canal specialist not having tooth pulling as part of his mandate, I was then sent to yet another specialist who also does implant work, which I’ve delayed big time, due to so many other teeth issues that took priority.

2 more trips an hour away from me later, the tooth was ultimately pulled two days before my foot surgery. I didn’t even feel it coming out. Thank goodness!

I had debated on holding off pulling it until well after the surgery, because if there were any ongoing issues, I wouldn’t be able to drive for at least 2 weeks to get things fixed. However the specialist encouraged pulling it sooner than later to attempt to get back to my healthy old self again.

So why would I even anticipate issues?

Dry socket is a painful condition, in which a bone is exposed to air. A normal pulled tooth bleeds to form a blood clot over the area. However if the blood clot for whatever reason doesn’t transpire or dislodges itself, (caused by ie: using a straw) the only treatment to relieve pain is to go back and get a socket packed with a medicated clove treatment. This brings instant relief, however may require several treatments before healing transpires.

Since I am not much of a ‘bleeder’ and have had dry socket before, it was a legitimate concern.

Incidentally, I have always asked for extra freezing, however my brother gave me a great recommendation. Request 24 hour freezing, so you can ensure to get a good night’s sleep. Which I did.

The next day, my jaw was squawking big time, however armed with reg strength advil and tylenol as needed, and soup made ahead of time, there was nothing else I could really do other than endure a little bit of throbbing and… 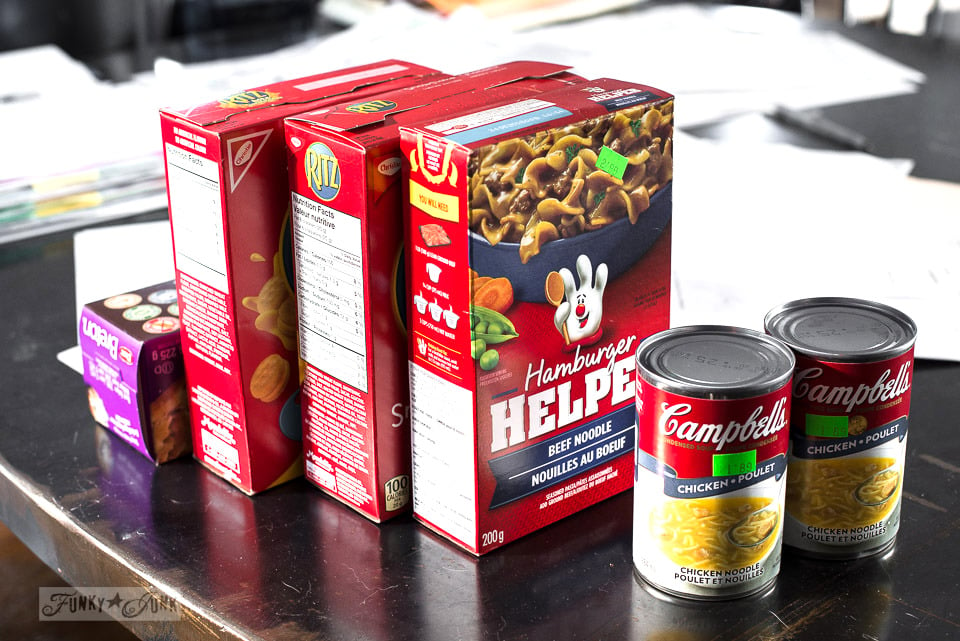 My foot surgery was yet another project long in the works. My feet do have bunions but they haven’t really altered my quality of life so nothing was really required. However one of my feet seemingly overnight grew an extra bony growth on top, as if it was yet another bunion. This one started to effect my walking.

Canadian heath is actually well run out here, however the pay back can be very long wait times for surgeries. I waited nearly a near just to see the foot specialist never mind another 6 month wait for surgery after the fact!

Over that year, the pain gradually increased. Walking for exercise was definitely out of the question. Thank goodness for my bike riding adventures, as that didn’t seem to give me any issues.

While in Hawaii, I kept my walking to a minimum and simply took frequent rests when I could. So while I was burying my feet in the sand and enjoying the view, I was also resting up a pesky ailment that wouldn’t leave me be.

Anyway, once the Dr. visit finally transpired, he moved the surgery update from 6 months to 6 weeks, in case it was something serious.

Grateful or scared? I hadn’t decided quite yet!

I don’t like being in pain, and don’t do well with any meds, let alone heavy duty ones I’d likely need after the fact. My family also has a history of getting really ill from the anesthetic, so this greatly concerned me too. I had never been put out this way and the unknown was super unsettling.

Then I investigated online as to how they may put me out. A mouth tube?! No one told me this part! I couldn’t even open my jaw yet! I called in, and they assured me there were other ways to put me out with my type of surgery, so not to worry.

So, with a looming surgery date 2 days away, and the promise of no driving for 2 weeks ahead, I started on my long list of food (including a LOT of soup ingredients) to hopefully tide me over. And it kept me busy enough to have little time to worry even more.

My doctor had mentioned I’d be outfitted with a ‘heel shoe’, allowing me to put weight on the foot right after surgery, so walking shouldn’t be an issue. However the little warning in my head told me otherwise.

Being that I live on my own, I wouldn’t have anyone at my beck and call if needed, so I debated if I should quickly visit a thrift store and pick up some cheap crutches.

And that’s when my blog buddy Breida read my post on 4 Brave Things, and she messaged me immediately, shooting me a picture of a scooter.

While I ultimately scoffed at the idea, (read about it HERE) I took it totally seriously the next day by visiting a discount medial rental store. Just in case.

Turns out, this was the single most important decision I could have possibly made. More on that soon. 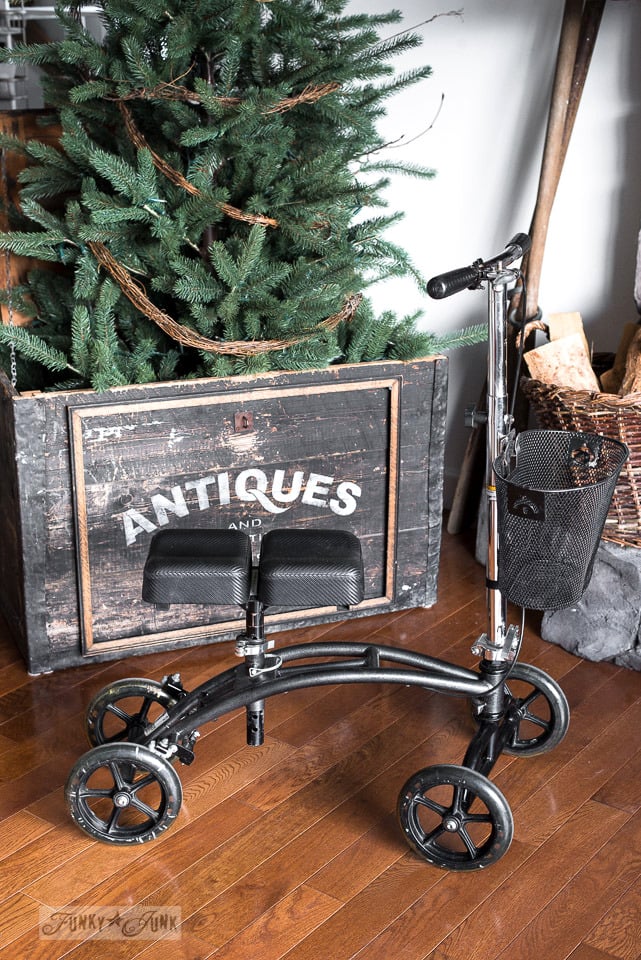 My foot doctor told me I wouldn’t need any helpers after my foot surgery other than a strap on heel shoe. I’m glad I didn’t listen, because THIS scooter proved to be the best decision I could have ever made!

A knee scooter is a smaller scooter-like device that provides light duty help for helping you get around when you need weight off a foot. You place one knee on the seat, and push-glide where you need to go. WAY easier on your body than using or a cane, although a lightweight adjustable cane is also recommended so you can get around in tighter areas.

It pays to visit a local medical supply place to try one before purchasing. I debating purchasing until the cost of one was prohibitive in Canada (over $400). So I chose to rent one in stead, which cost me $75 for one month.

I found the more affordable ones to be really flimsy and somewhat unsteady. As luck would have it, my medical rental place had a Drive, a better quality one hidden in the back stock room WITH a basket. Quality = sturdy!

The added basket also ended up being a MUCH needed perk.

Although all knee scooters claim to be indoor / outdoor, I would not trust anything light duty on anything other that perfectly smooth floors.

Below is am Amazon Affiliate link showcasing the Drive scooter I rented. While there are others more price efficient out there, I don’t recommend a lesser quality than the one I had. They were too unsteady.

I also had a printed-out document on how to prepare for surgery. So armed with my list, I also picked up a couple of special washing sponges, double checked my rides to and from the hospital, ensured all food was topped up, and with a clean house, I went to bed with my bad foot one last time, reciting one thing in my mind, over and over.

All you have to do is show up.

I mean, when you think about it, it’s true. We can only do so much. Our part is to assess what ails us, seek pro help, then trust others with more knowledge than we have, and pray hard that the end result will be a success and we can live life to the fullest. Right?

Why would a pro want to do this for no reason? They wouldn’t.

By this time, I had relinquished fear, and replaced it with trust. I am stunned to report, I felt at peace.

But little did I know, how a jaw that refused to open was about to save my surgery day… and how a calmed down tooth would turn into my worst nightmare at the worst possible moment… more soon!
.

Read all entries to date on Foot to Mouth story HERE