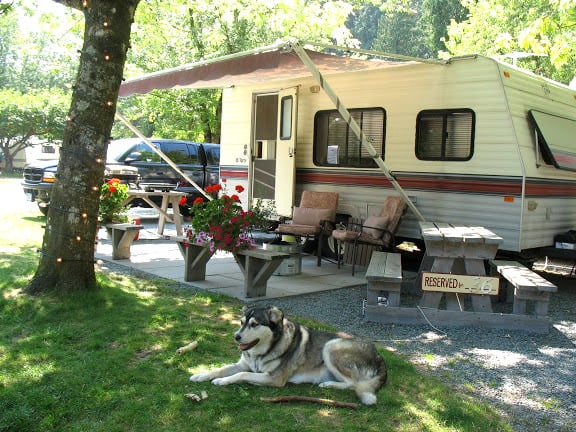 How I sold my travel trailer privately.

We’ve been camping in our travel trailer for many years. In fact, my son grew up on Harrison Beach while we basically lived part time in a travel trailer while we parked full season at Harrison Hot Springs.

You can read more about Harrison Hot Springs from their tourism website HERE. It’s a gorgeous beach front town with the prettiest views and lovely walking trails.

It was a good life. A very VERY good life. For that season in time for certain!

Then we started to get stirrings to travel on jet planes to far off places instead. Knowing I couldn’t swing both camping full season and international travel, it was becoming increasingly obvious that one day we would likely need to let camping in a travel trailer  go so we could do international travel instead.

Then suddenly I became ill, putting the camping adventures to an abrupt halt! You can read that story HERE. 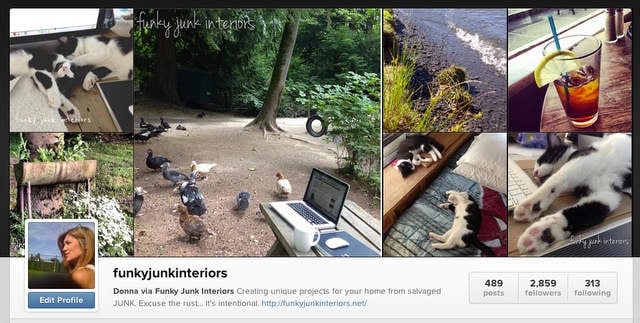 So the trailer sat in my yard. We played with it while it was parked there, and even eventually camped at nearby places for a night or two. But it was very different. Campsites were always booked so far in advance so in most cases, spots were full before we even decided we wanted to head out.

And that’s when we started to travel internationally to Hawaii instead. We started flying to Maui which ended up being an every summer habit for a good long time!

But after each trip, we’d come home to a parked travel trailer that was use to lots of beachside fun and campfires. Yet here it sat.

Until Walter paid a visit… 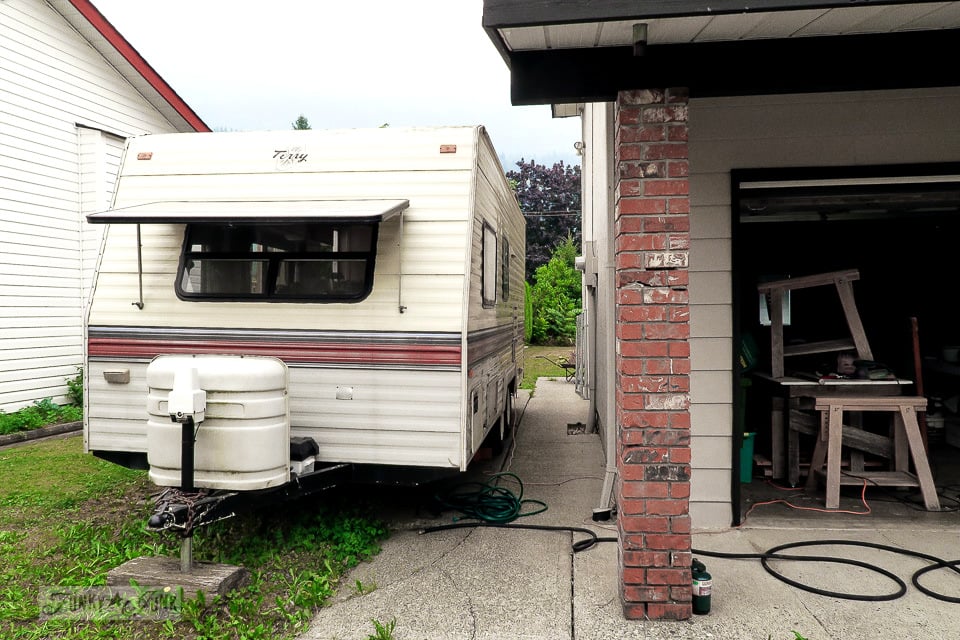 The parked trailer… in my way.

.
During my yard cleaning sprees, my eyes kept landing on that parked trailer. It sat pretty lonely looking on top of a once gravel driveway that I was now weeding now and then, and wasn’t keeping up with in a real hurry.

In short, the trailer was becoming a liability.

I’d mutter to myself, “One day I have to deal with that…” but always walked right past it. It was stuffed to the rafters with camping equipment we hadn’t touched in a few years.

Even though we were no longer using the trailer, I wasn’t in a big rush to get rid of it.  I always thought perhaps we’d camp one more season, or park it on some lake front property that I bought for some screamin’ deal of a miracle price. Then I could renovate it!

But then I reasoned our flying vacations would probably end. I wanted to jump on a plane MORE.

But the trailer being there was a constant reminder that we WEREN’T using it. Travel trailers deteriorate if they aren’t constantly used and fixed along the way. So I seriously debated on letting it go. One day, I mused…

Until Walter showed up. 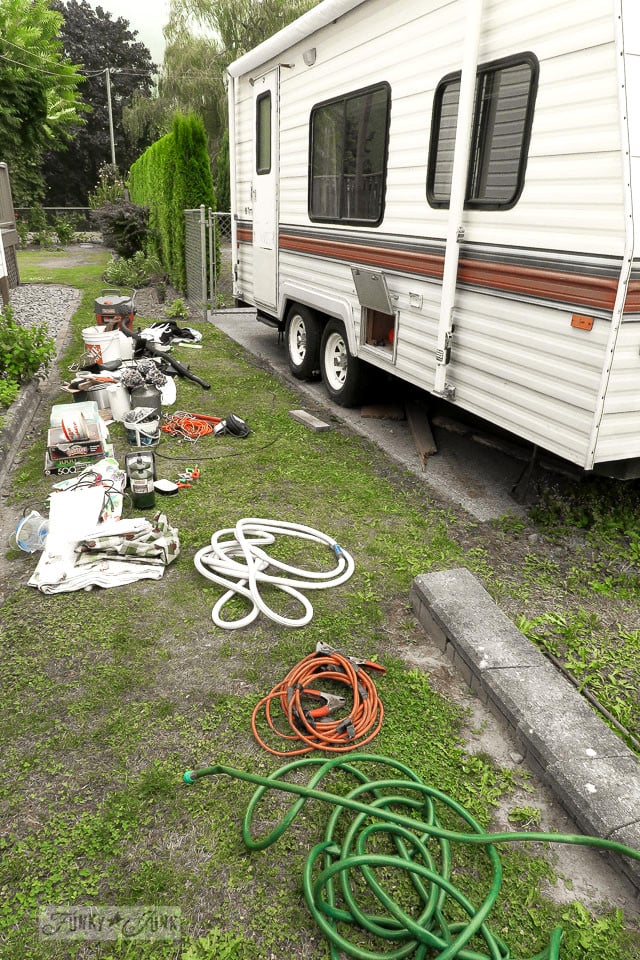 Then Walter paid a visit.

Walter my pruner arrived late in the summer for an explosion of new tree pruning we prearranged. He was actually hugely delayed due to being so busy. So we had more than ever to clean up PLUS the addition of removing all the flower beds in the backyard to free up my yard workload. It was a massive 2-3 day job ahead.

This would mean that we’d need to get his excavator in… which meant moving the trailer.

That’s when Walter turned towards the unit and said, “Ever have thoughts on letting it go? We’re after something just like that…”

Oh goodness. I wanted to scream a high pitched YES but dug in my heels HARD.

This was a baby book on wheels after all!

Besides, my son’s ice cream bucket filled with rubber apes was still in the trailer. You read that right. My baby grew up camping and this would be a hard one to relinquish.

I honestly was caught off guard with the question, however I HAD been wishing it was just gone so I didn’t have to keep worrying about it!

So I told him I was open to the ‘idea’, and for sure, bring his wife over for a peek…

“Can we come this evening?”

That meant 3 hours. I was thinking more like, ‘give me a month’s notice..’

That trailer’s been sitting for 4 years fully loaded (and then some) and I need to get it camera ready for a viewing in 3 short hours?!

And then he left.

What had I just done? 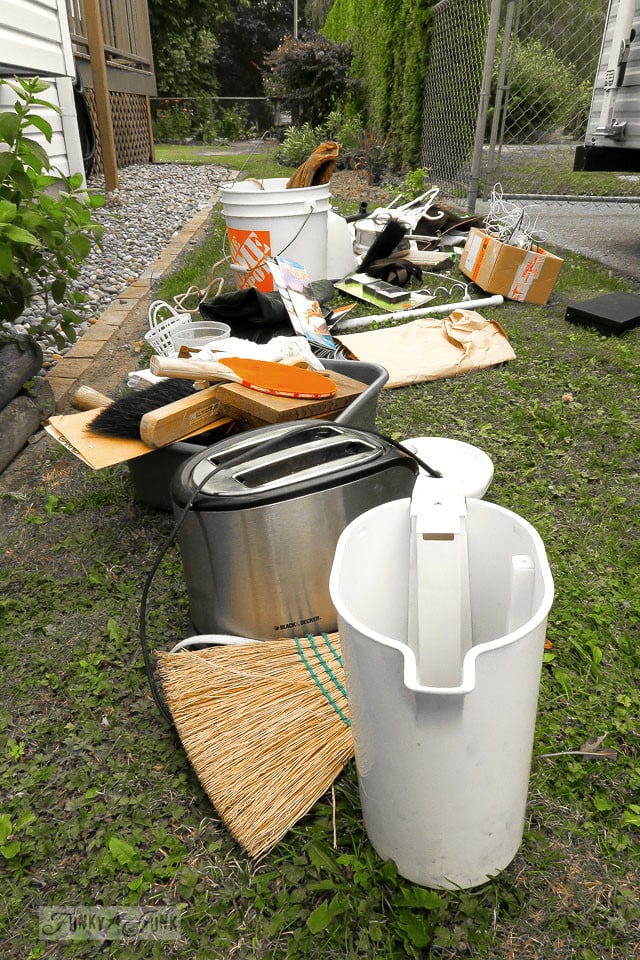 So I entered the trailer door, and was greeted to stuff piled to the ceiling from every surface.

Shaking my head, the needed adrenaline (I had been missing all summer I might add!) kicked in high gear and I started heaving camping gear out the door onto the lawn without even thinking twice.

There was no time to think even once! 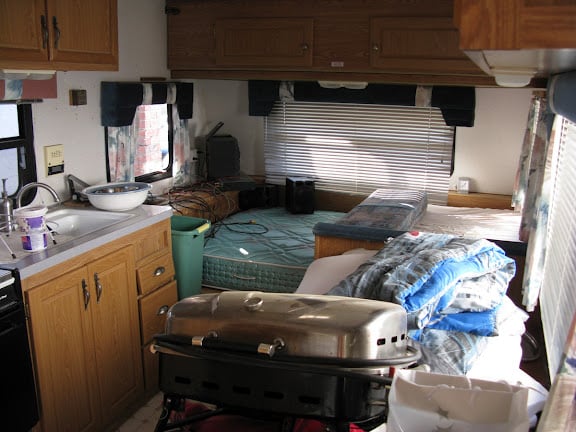 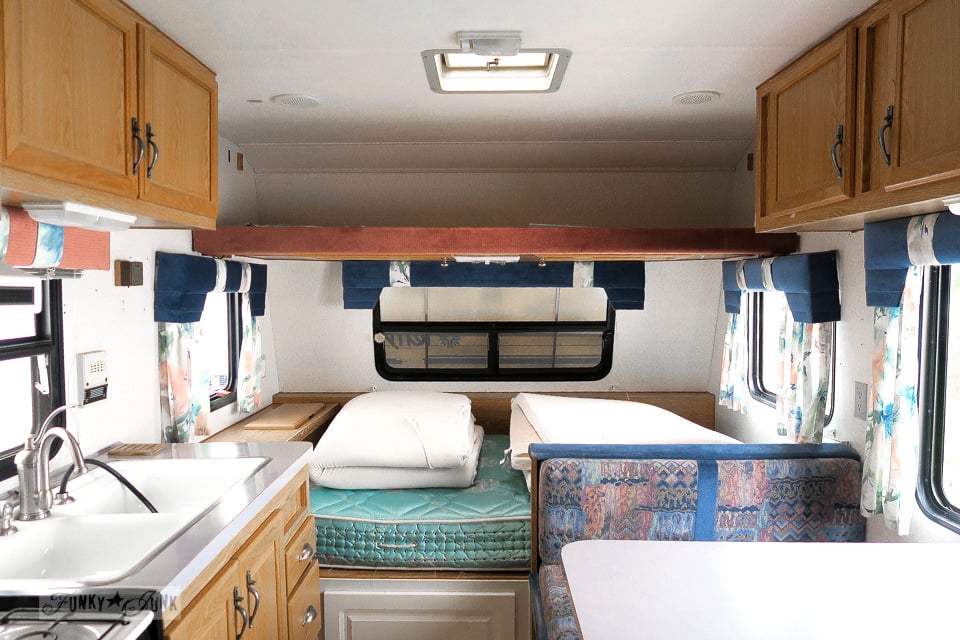 .
I focused on just the junk you could see. Everything got carried out, then all the surfaces got buffed until they sparkled. I attempted a few cupboards but ran out of time.

Later that evening, I heard them drive in as I was filling up a galvanized jug with water for some fresh cut hydrangeas for the trailer table.

As I carted out the flowers to meet them, I was happy to see they brought their two girls!

So we all clamoured into the trailer for ‘the tour’.

In a nutshell, they loved it.

I will never forget the vision of those sweet girls bouncing from one bed to the next, giggling and chatting about their vacations to come. And their beautiful Mom running her hand along the surfaces, appreciating everything she saw.

They looked good in there. SO good.

But…gulp. My mind put on the brakes.

I wasn’t sure I was ready.

But where did they go?

Turns out I didn’t have to be ready quite yet. That’s when things got super weird. Walter had a bunch of family things transpiring and our communication just stopped.

I honestly thought they changed their mind. The ‘how I sold my travel trailer privately’ story was obviously not meant to be, right?

So during that lull, I had plenty of time to relive all the what-ifs. Again. And the cons rose to the top much much higher than the pros.

Pros to keeping the trailer

Cons to keeping the trailer

So before I heard back from Walter, I resolved it was time to let it go even if they no longer desired it.

But my gut said it was theirs. Even if they couldn’t swing it then, I resolved I’d hold it for them until they could.

Because it was them or nothing. I wouldn’t likely have the guts to do it if they didn’t want it.

That finalization was so strong it was like the words were audible. “IT’S THEIRS.”

Then the phone rang. They were still in!

And not a minute before I came to that conclusion, the phone rang.

It was Walter. They were still interested, and Walter wanted to know if he could take one more look around to test out a few things. Sure thing! He came that day.

And after viewing… we agreed on the deal.

Then he said, “Can we do it tonight?”

I didn’t even do anything else to the trailer since the first viewing! It needed HOURS of work.

But that’s ok, it would be another real push, but I already knew it was theirs, so why not?

No time to cry, right?

MADNESS I TELL YA.

Naturally, I did make it (and the big camping gear pile in the backyard proved that point well) but believe you me, I pushed so hard I was numb.

And I think that was a very good thing.

Next up, we met at the insurance place to swap plates.

Grateful for a moment to finally sit, I didn’t want to think too hard. I may have to schedule some crying in but not right then… please oh please…

But when I saw Walter’s new plate, my world STOPPED. 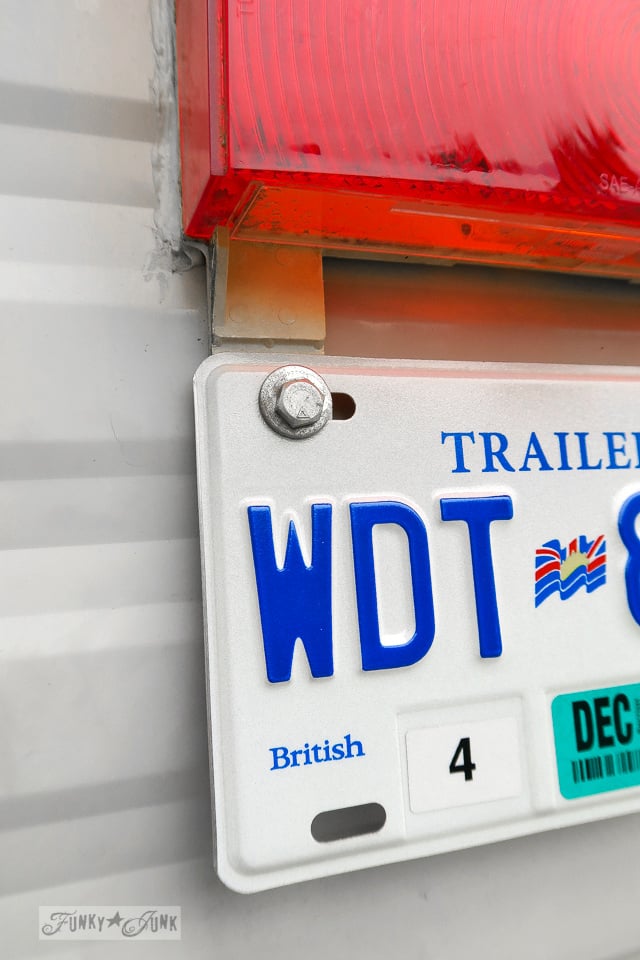 The license plate that changed everything.

WDT…. “Walter D’s Trailer” I mumbled to myself.

I blinked back happy tears.

This is when I think I may have frightened the poor man. I turned to him, absolutely BEAMING mad woman style, and squealed, “The plate! It’s your initials. This was meant to be your trailer all along! I KNEW IT! I JUST KNEW IT!”

I’m not sure he ever recovered, but I know I sure did! 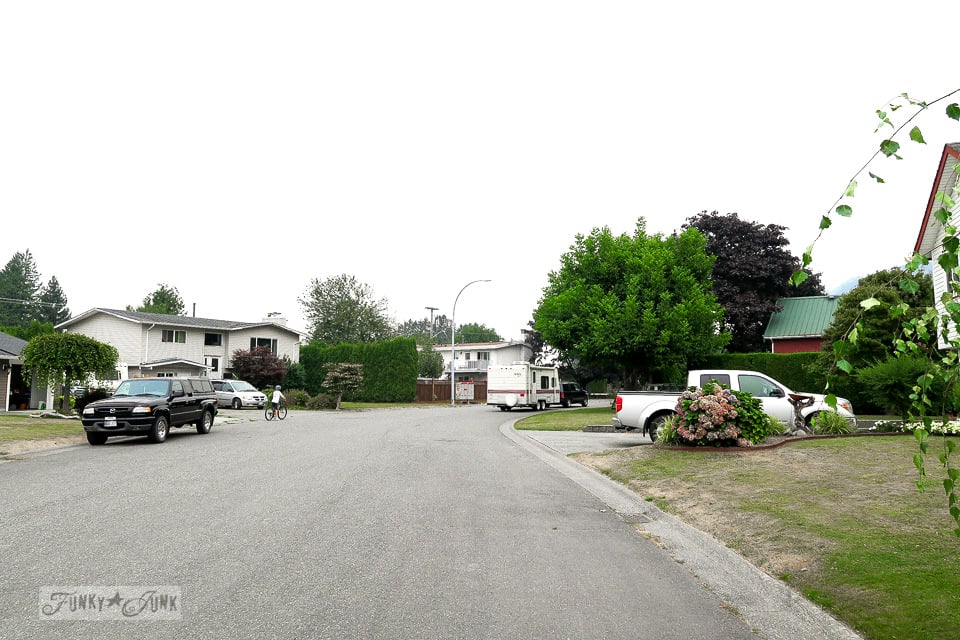 The trailer leaving the yard for the last time

.
Instead of tears flooding my cheeks, I wore the BIGGEST grin ever as I watched the trailer being pulled out of my yard for the very last time.

It made me think of Toy Story where the toys come to life once Andy leaves his bedroom. They gather around and plan things, then go limp once Andy shows up again, where they have the time of their lives together.

That trailer was about to embark on the best time of ITS life! Thanks to that lovely family that helped me through this massive hurdle that needed dealing with.

THEY HELPED ME. By me helping them. Really, really cool trade. 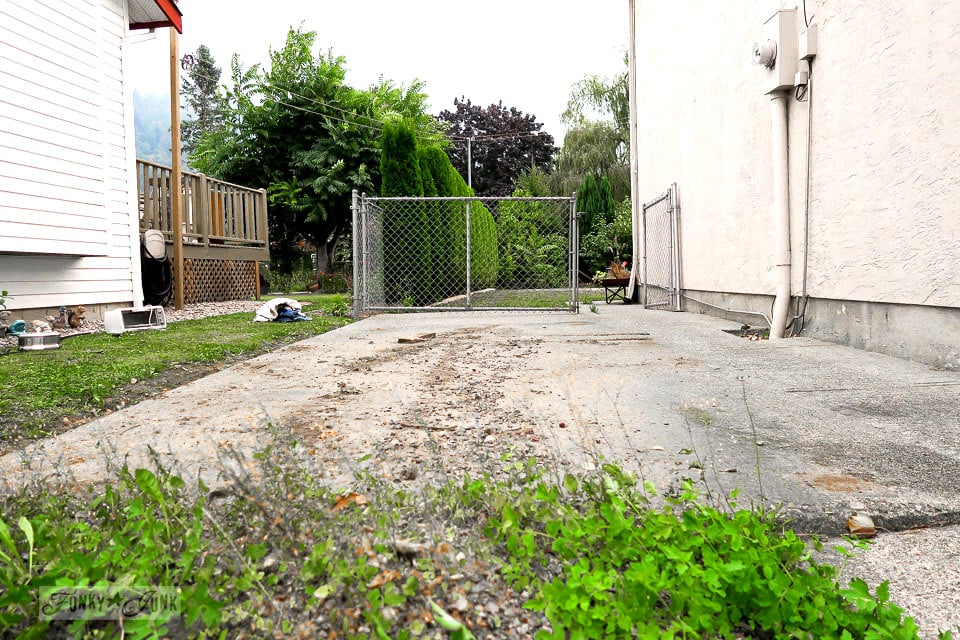 The empty parking space… that made me smile!

When I turned around to stare at the now vacated parking spot, I felt such relief!

The burden of yet another big in-your-face decision was lifted.

So if you ask me how I sold my travel trailer privately?

It was because I needed pruning done.

So if you have something to sell, hire out some help! Ya never know if they’re the one to help you make it happen… even if you weren’t quite ready.

Do you currently live the travel trailer life or do you travel internationally instead? I’d love to hear about your own adventures! 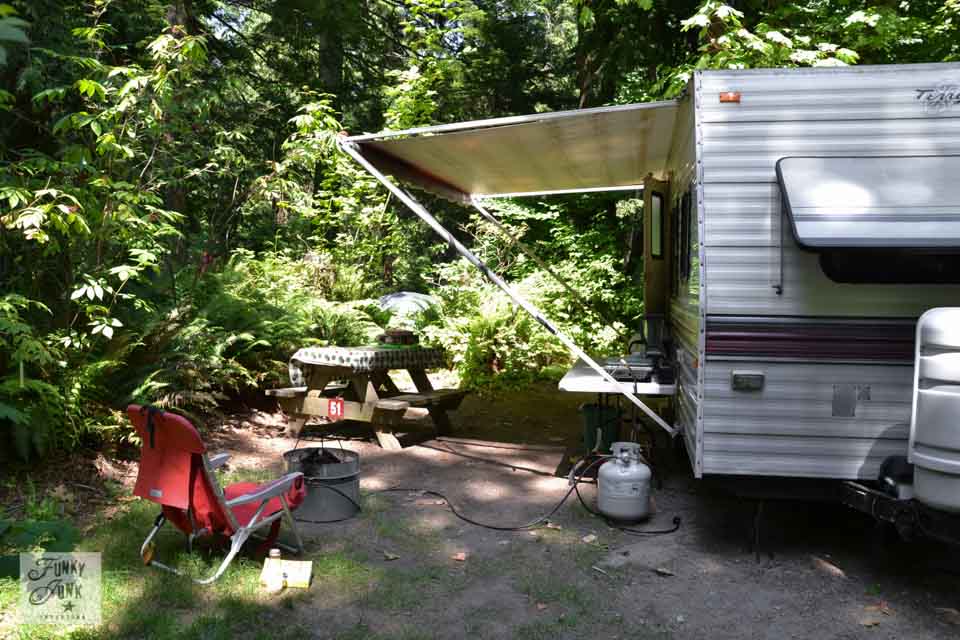 And to celebrate the trailer’s departure, here’s a few popular past posts…

Camping in a travel trailer – my best tips

Winterizing a trailer by blowing out the lines

Summer Changes 3 part series… about the mysterious illness that changed everything.

24 thoughts on “How I sold my travel trailer privately.”