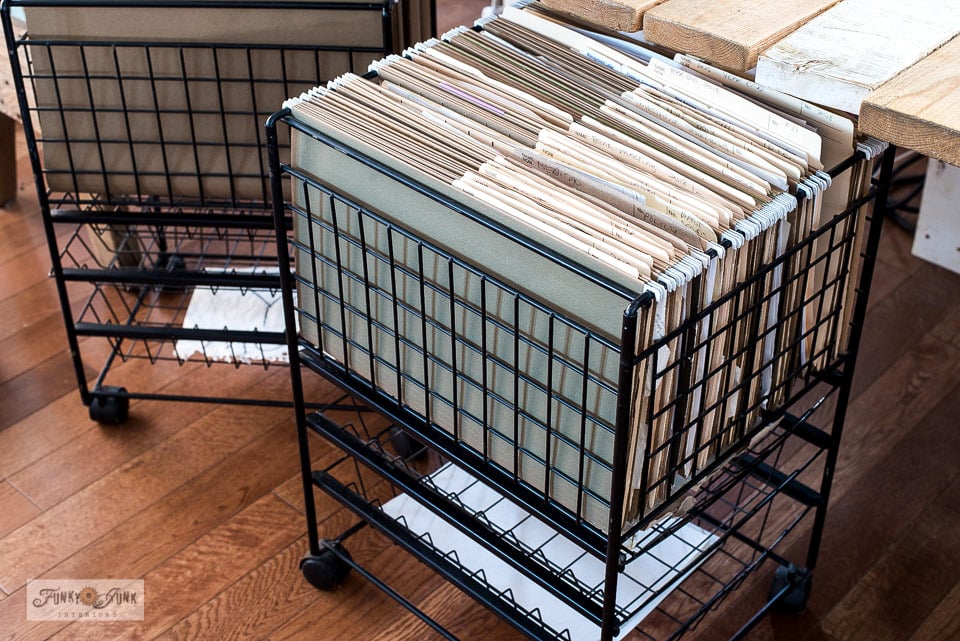 Read about the paperwork challenge HERE

This past week, the challenge was purging paperwork.

So I promised myself that by week’s end I’d have purged EVERY. SINGLE. PIECE. OF. PAPER. in the whole entire house.

I had mused what that meant, but it ended up meaning a whole lot more…

This post walks you through what I got done and how, but the best part is the video at the end! 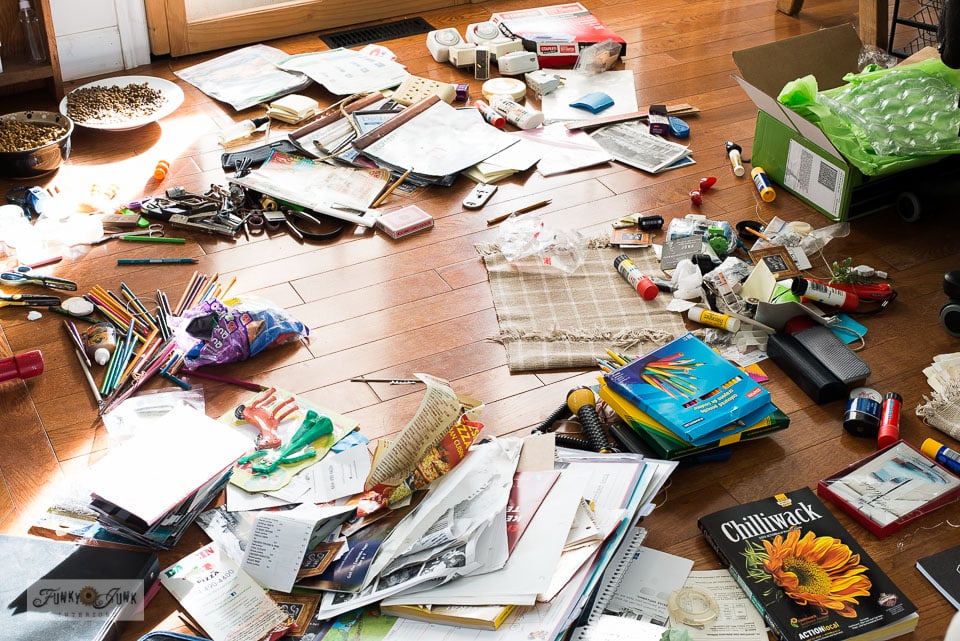 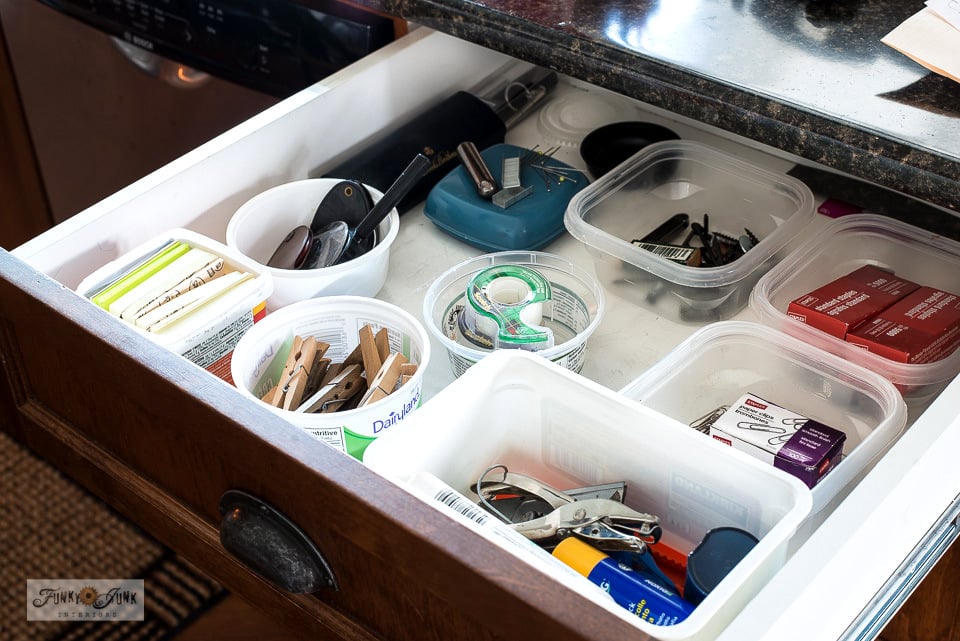 The first thing tackled were three very deep drawers in the kitchen. They were more than junk drawers. It was a massive medley of stuff I didn’t want to deal with. And being that I found a 2014 calendar in there, it had been quite some time since those drawers were empty!

I attempted to clean one drawer at a time, because honestly, I couldn’t even close one any longer. So it all had to come out in one MASSIVE pile so I had a chance to make sense out of it!

So yeah. Purging paperwork was indeed part of this. Along with so much more.

Everything first got grouped into categories so I could visually see all there was, which worked into a keep / purge effort.

The drawers are now so empty, they look strange!

Next up, I have 3 rolling files underneath my blogging office that were overstuffed. Purging paperwork was an understatement.

Because the 3 files were 3 separate categories, I purged one file basket at a time. And managed to get quite a bit out of them for shredding and recycling. MUCH more roomy now!

As I searched for the rest of the paper upstairs, I quickly realized I had already dealt with most of it this past year. Well that was a happy realization! All those long evenings spent last year paid off big today!

And the only thing left to do was head downstairs. Which proved to be the biggest challenge of all, even though everything was already boxed and ready to go. Funny now that worked… 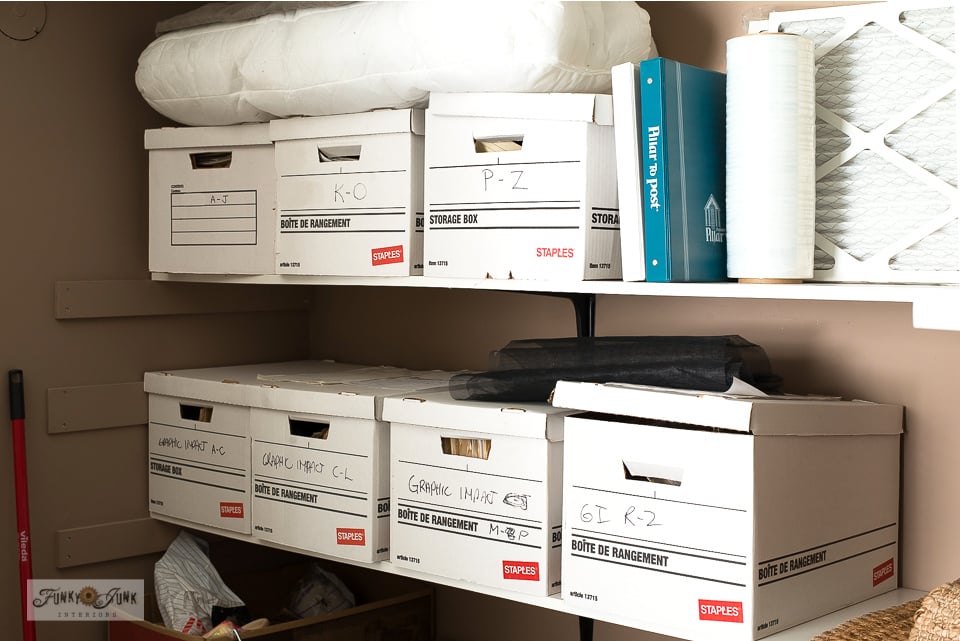 In my laundry room, there are storage shelves that house paperwork from my past sign company (that I no longer run!) BOXES of files were still there as if i was still open for business.

I suppose my reasoning was, what if one of my past customer wants to know details of a given job?

Not sure why I was looking out for them more than myself! I’ve gone through those files about 4 times in the past 10 years…

So it was really a no-brainer. Purging the paperwork here would require faith that this was the right move, and the guts to go through with it.

I first called around to find a local shredder, then made the decision that what I plunked in the front entry would go as soon as I could get it there.

With a reward. If I moved the boxes to the entry, I’d reward myself with a movie theatre experience. And this girl loves her movies and popcorn….

… so I bit the bullet and did it! And enjoyed Frozen 2 shortly after.

Purging paperwork tips that helped me:
.

.
My realizations this week:

A  strange feeling overcame me as I started emptying shelves and drawers and floors that hadn’t seen the light of day in quite some time. It was as if I let them go, my life may change. The newly bare spaces everywhere resembled a house being packed up in order to move. Which is a topic that still scares me.

It became quickly apparent that by holding onto all this stuff, I was stalling progress. All this time, I think I was digging in my heels to ‘feel safe’.

Relinquishing for me had become a mental wall that needed to be broken down. This was so not about tossing stuff! It was all about what may come after.

But here’s the thing. After the stuff was gone, the dread was replaced with hope of what could be.

Do you remember my travel trailer story? It was like that. I fought this sale tooth and nail, then as soon as it was gone, it was a relief!

A few lofty dreams even floated to the top. It was as if the door of hope officially unlocked so it could swing wide open when I was ready.

Below is a short video of the book cleaning process and extra room cleaning (and mumbling LOL) this past week!

.
According to Marie Kondo, miscellaneous covers just about everything else, but in an order.

It’s suggested to only keep things you use and love. And to toss out all the rest. Most things are accumulated just because, which isn’t a good enough reason to crowd your space.

I realize that’s generalizing because some collect things so they grow worth and such… but I suppose it comes down to, how much do you really want to hang onto if you want your house back as well?

So it’s suggested to go through your belongings in this order of categories, so the task becomes much simpler. 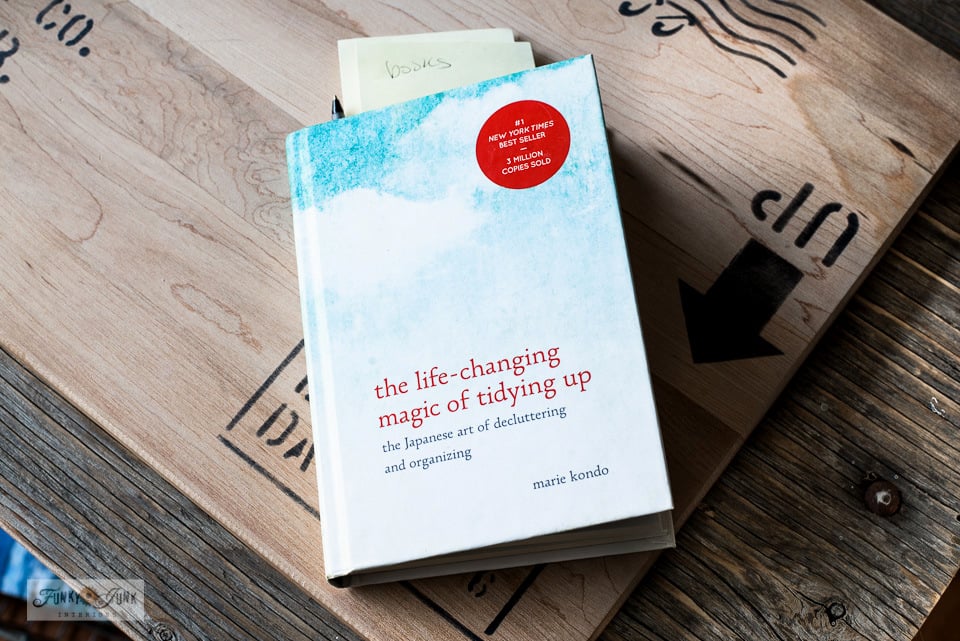 Marie’s book continues to break each category down which gives really encouraging advice. But she does heed the warning to save sentimental things for last, because they will likely take you the very longest.

So I’m going to tackle the list in the order she suggests and see what happens. The aim will be for at least one (if not more) of the suggested topics each week and see how that goes.

One thing I’ve come to realize is, if you work in the order the book suggests, everything seems to get touched. And ultimately done!

Which is the entire point I guess!

Are you following this challenge?

What did you work on last week?

How did you make out?

Join us on From Crap to Clean on Facebook if desired!