Do you make lots of mistakes?

Get ready to laugh AND feel good about it!

Because the blogging world’s greatest storyteller just wrote a feel good story book that celebrates the blunders in life! 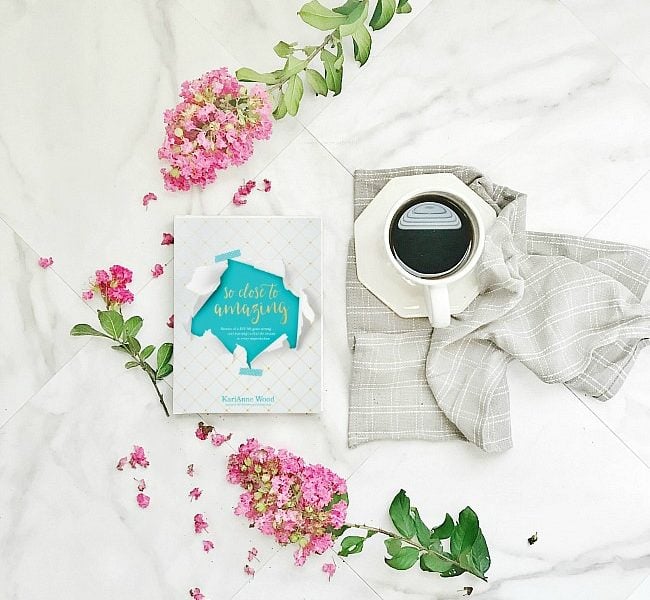 I’m referring to KariAnne from Thistlewood Farms and her new book, So Close To Amazing.

Have you read KariAnne’s blog? Beware… her stories will glue your eyes to those pages for hours.

And in true KariAnne style, her book does the same. It’s her story, filled to the brim with easy read hilarious constant mishaps.

Are mistakes funny? I never use to think so! But she’ll change your mind. This book had me laughing out loud… and actually appreciating my next blunder!

You’ll also be happy to know that off topic ramblings actually have a name. They are apparently called Total Asides. Huh! This book appears to be extremely educational too. 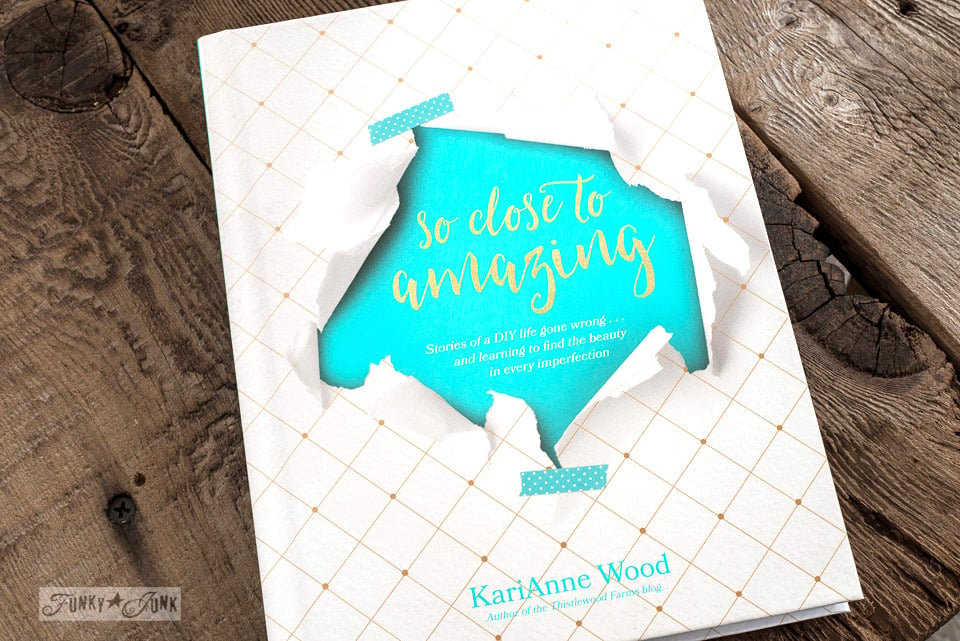 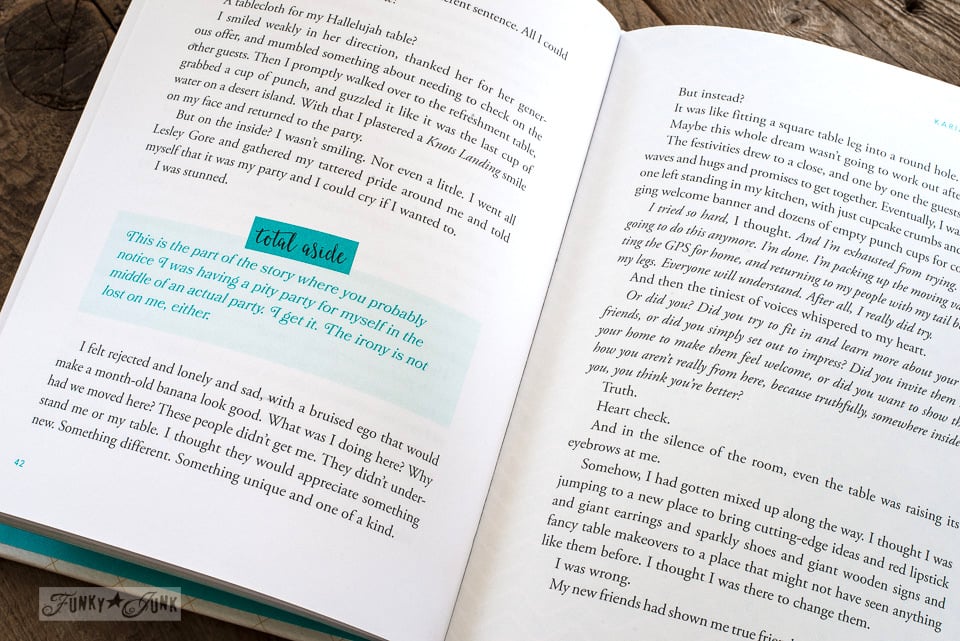 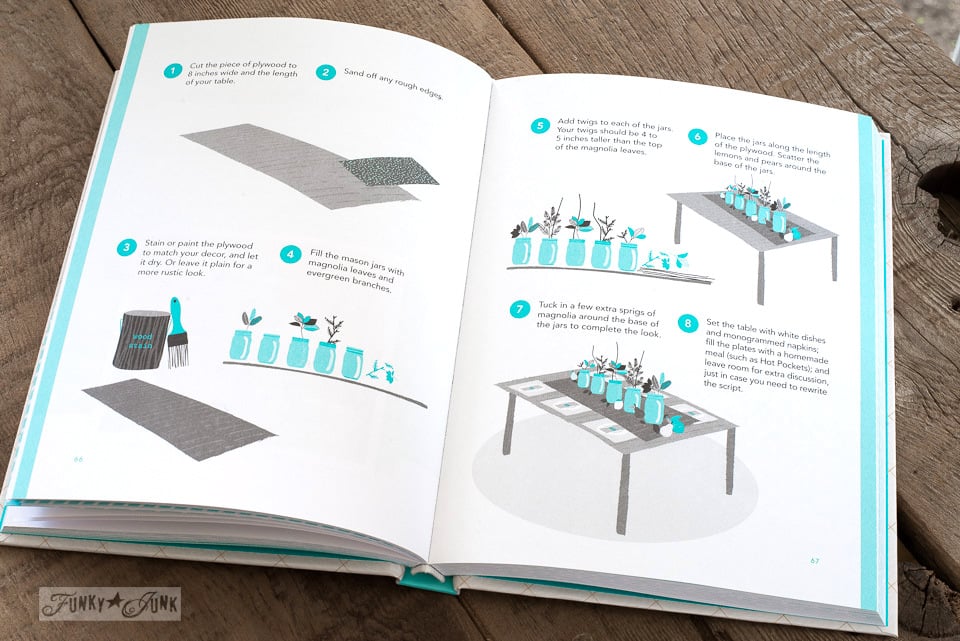 So it came as NO surprise whatsoever that her book, filled with her hilarious stories gone wrong along with some pretty fun DIY tutorials along with Total Asides that have you heading north, south, east AND west… had me gasping for air.

It is funny! But you’ll also learn just how so close to amazing those blunders are. This book encourages you to celebrate you just the way you are.

So when KariAnne asked if I’d like to read / review her book, then share one of my own stories, well…

Perfection is so overrated anyway. So a big fat YES here!

The modern bathroom vanity that became so much more

I was sent a brand new vanity as part of a sponsored post, challenging me to marry it with my rustic style.

My stomach flipped. In all seriousness, I wasn’t sure I could pull it off. But I desired a more productive vanity than what I had. 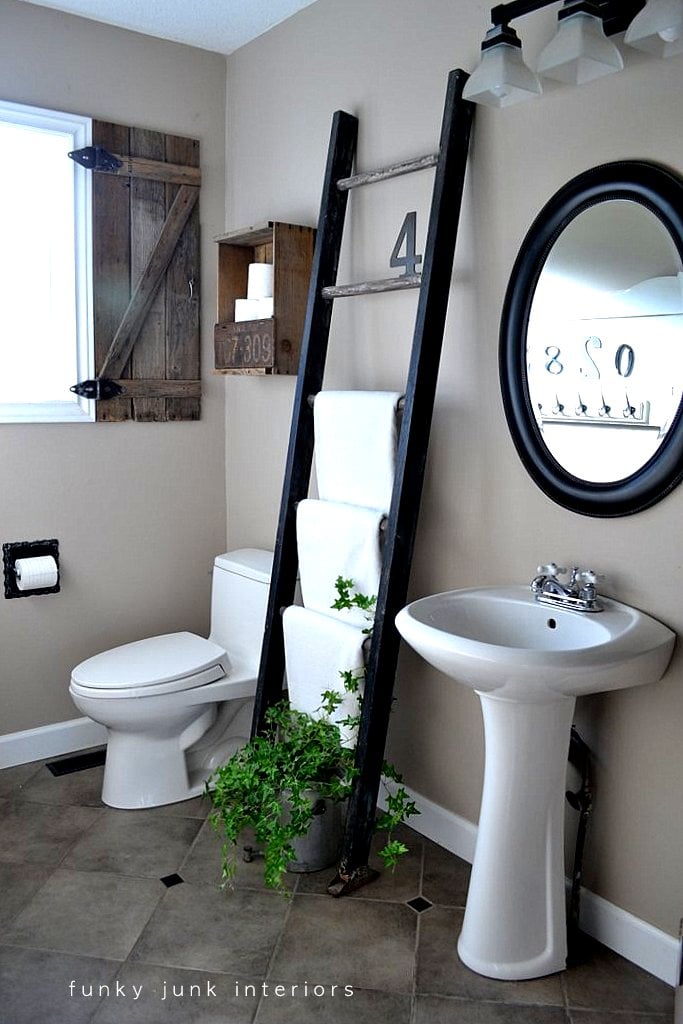 The pedestal was cute and didn’t eat up a ton of space in my smallish bathroom. However, when your only place to put the flat iron is on the floor… yeah.

So when this challenge came up, I jumped on it. I chose the vanity I felt I could work with, crossed my fingers , and hoped I could make my sponsor proud. 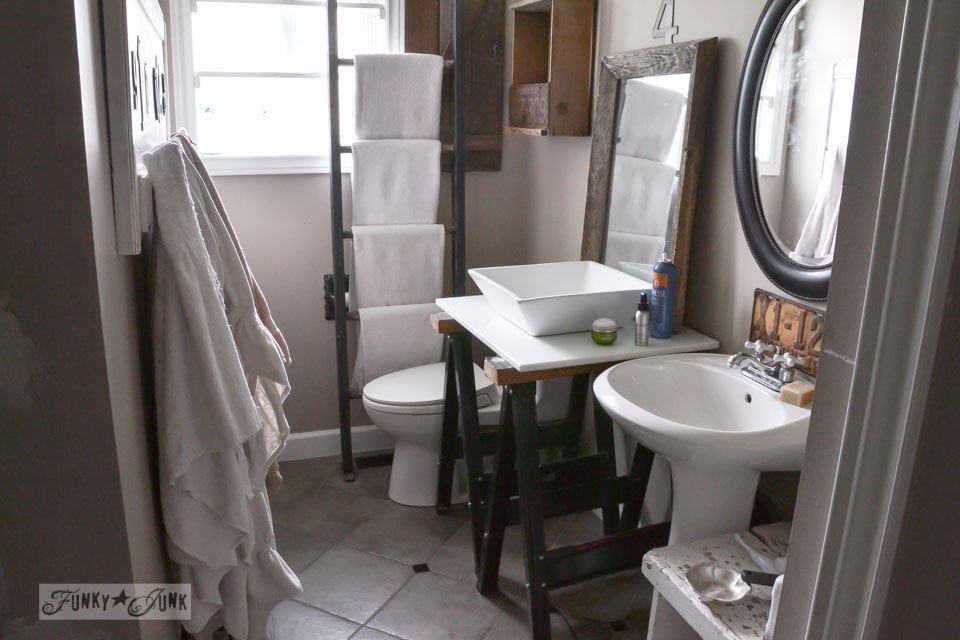 Once the vanity landed on my doorstep, I was hesitatingly giddy. It was modern alright.

So I played the visual game of dry fitting stuff together to get a handle on where I’d take it.

That’s when I started feeling deflated. I felt I could maybe do the vanity part ok, but I just didn’t love the rest of the room.

I mean, a popcorn ceiling and very boring window for a start. Bleh.

So I did the ultimate and most craziest thing I ever did. I decided to make over EVERY thing I didn’t like.

What could possibly go wrong? 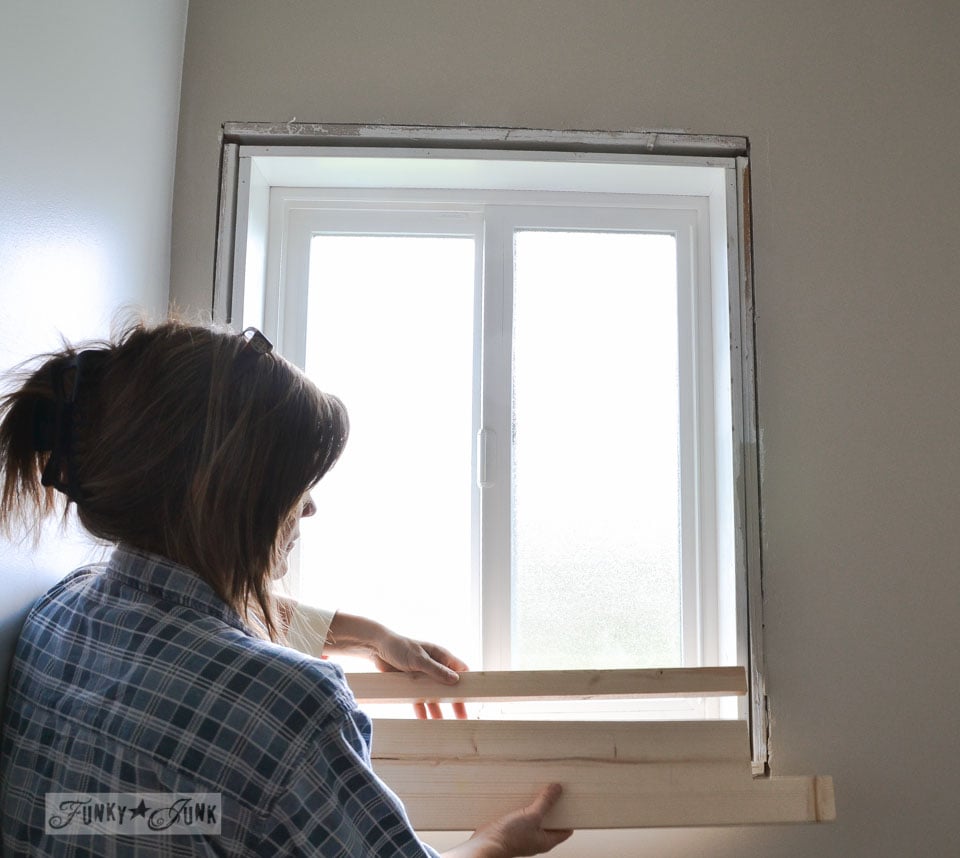 First up, that boring window moulding had to go. I grew up in a farmhouse and by golly I wanted a taste of that back, even if it was just one window!

So I looked online and wasn’t prepared for all those fancy miter cuts and expensive wood pieces.

But when my eyes fell on a simpler style that utilized stock lumber and straight cuts, I could do that!

Well, it had been awhile since working with the air gun. First I had to figure it all out again. Patchoo patchoo patchoo! Jamming gun. Splitting wood. Not fitting. Recutting. LOTS of caulking.

I remember sitting on the ground looking at all the strewn wood pieces. “Well, if I turn it just so, it’ll hide that nail and cracked warped board…”

I left the nail and warped board in the picture. Whatev.

Let’s just say, it’s a good thing I had a sense of humour. 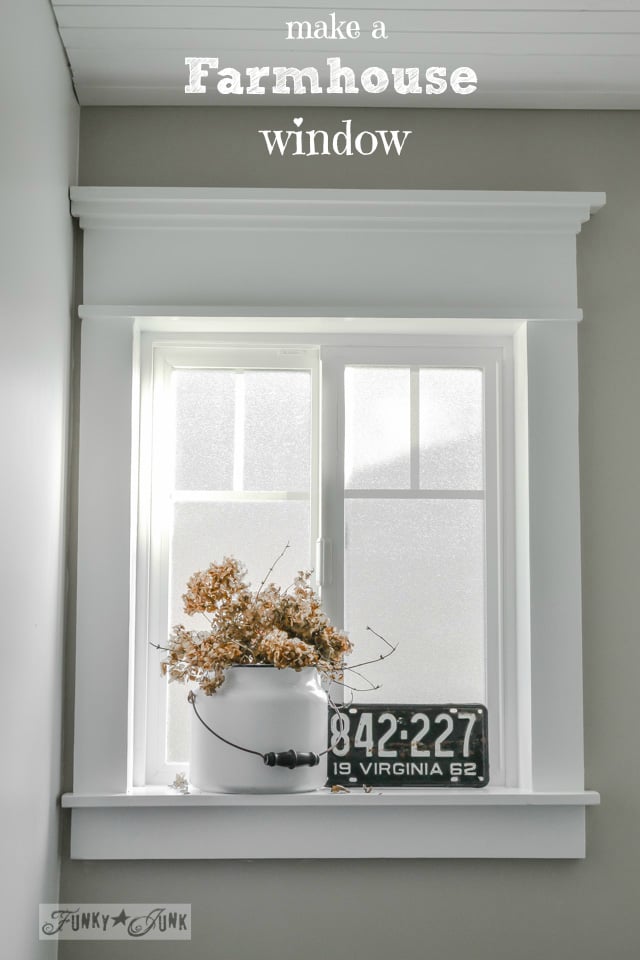 How to create a farmhouse window HERE

Because I eventually ended up with this! My little one room farmhouse was officially started…

p.s. the 2nd time around a door was an absolute breeze! Will share soon! 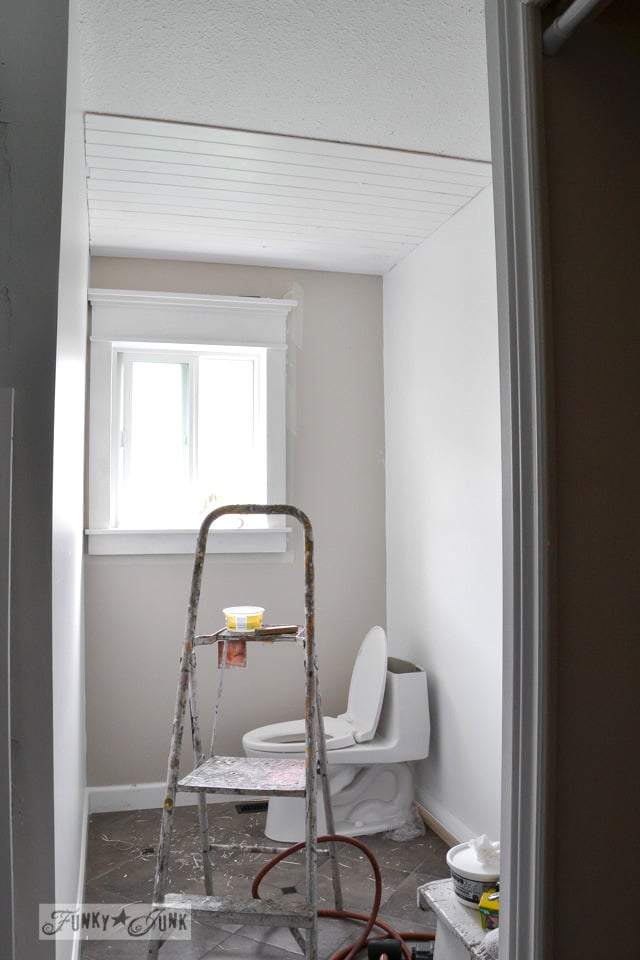 Next, that popcorn ceiling HAAAAD to go.

Every day I looked at it and turned away, much like experiencing burning retinas while staring at an ugly Christmas sweater.

Being that I had never planked a ceiling before on my own, NO PROBLEM. Let the late night pizza dinners begin…

So, I was gonna be really smart and paint in between each board. Because we all know eventually wood shifts and I didn’t want gaps like some of my other ceilings got over time.

Well, do you know what happens when you paint tongue and grooves? They get thicker with paint. Which really means, none of them would join.

One more pizza dinner and a sharp exacto blade later I cut off all those paint globs and gotter done!

p.s. And thank goodness for caulking. 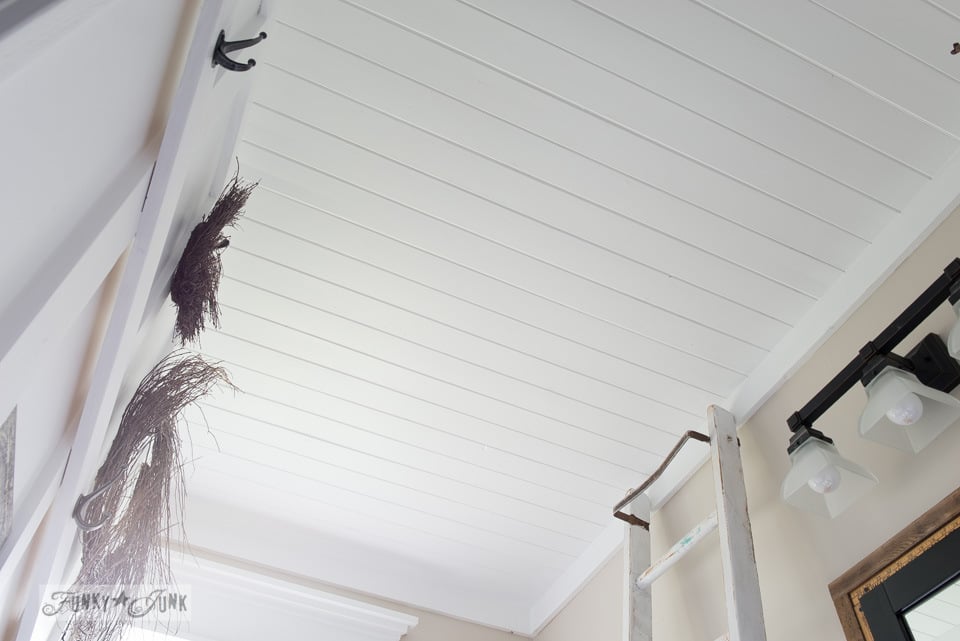 How to plank a popcorn ceiling HERE

And the result… swoon!

I may have sweat buckets and lost a few years off my life, but by golly that ceiling ended in perfection.

Next up, I needed more towel hanging options.

I loved the board and batten look, so I went with that at first.

But then I just felt the pull to do something a little different. Putting one board on an angle on top of it all… would that work? 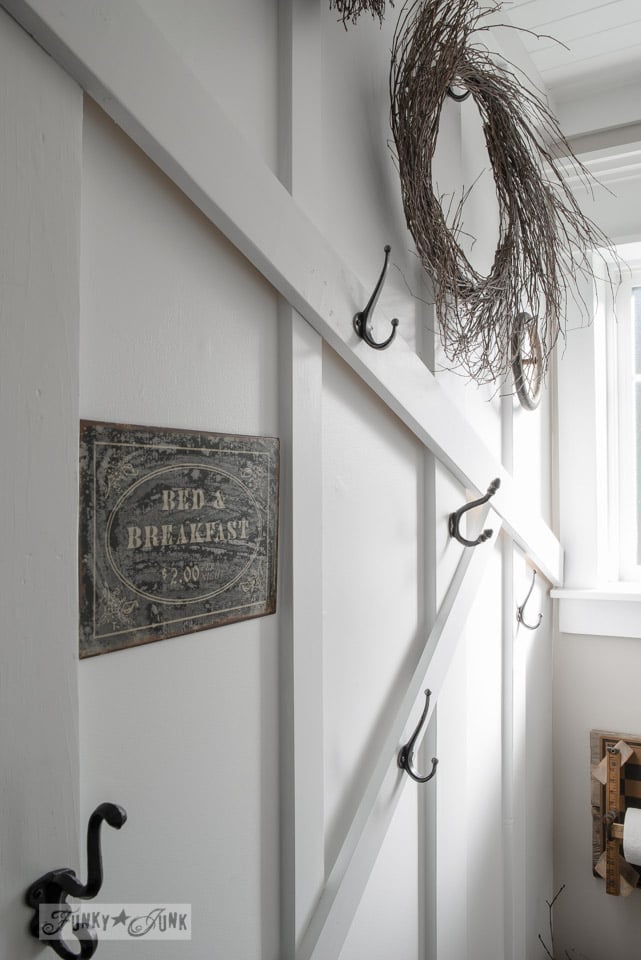 How to create a boarded attic wall treatment HERE

Well, yes, design wise, it worked wonderfully! It ended up resembling an attic wall of sorts.

However… to some of us, miter joins will never be our BFF. Never. We’ll just leave it at that.

And now for some REAL drama… are you ready?

Because of all the extra work I put into the bathroom, I was running super late for my sponsored post deadline. I needed to shoot THAT day before the sun went down because the post was to go up the next AM.

What’s another pizza at this point?

So I touched up the last bit of paint, then before it was even dry, quickly set up my camera on the tripod inside the tub due to my tiny awkward bathroom, when…

CLUNK! <— pretend that word is screaming at you. 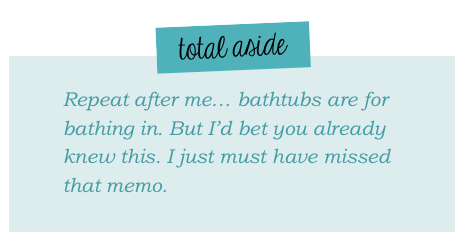 All I could do is stare in total silence. My camera and tripod were laying on the floor. Face down. The TILE floor.

I already knew. Picking it up, I flicked the switch on. Radio silence.

So let me get this straight. I finally got sent a really NICE product to work with, AND I pulled out all the stops to make it sing, but I can’t share the finished result…

After a small (big) vertigo (not really but could have been) experience, a wicked smile grew on my face like I was the Grinch on Christmas Eve.

I yelled at the boy to “get in the truck cuz we’re going OUT to eat!” (and I’m getting a camera while you chew)… and off we went.

Two months prior I had been dreaming of upgrading to a full frame camera. But for thousands of dollars more, I wasn’t ready to pull the plug on a camera that still worked for free. 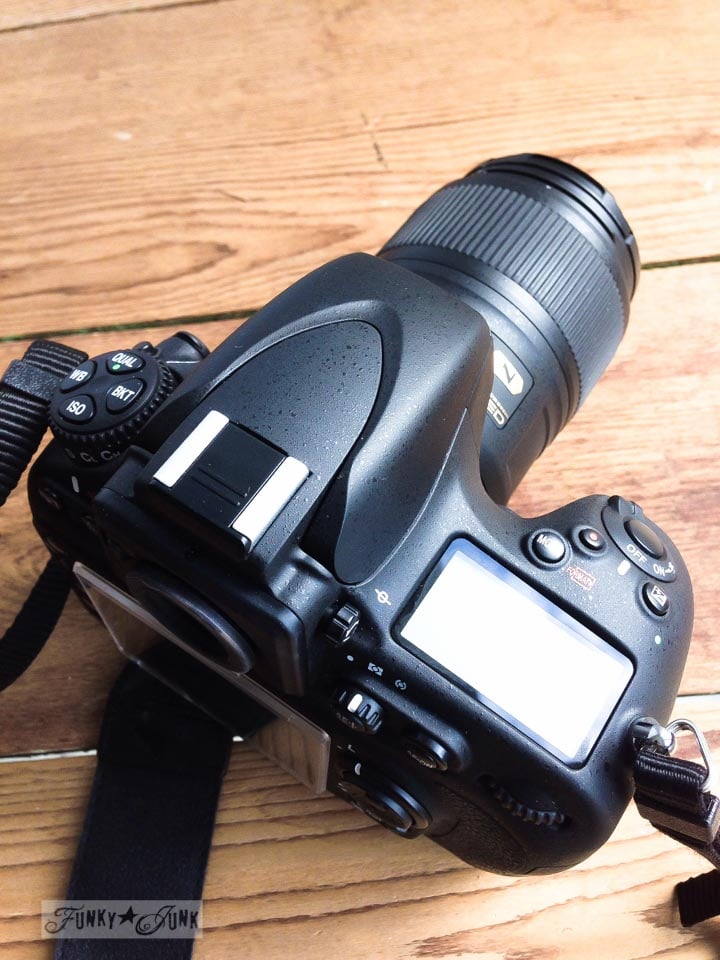 The camera equipment I use

Pretty sure that’s why credit cards were made. So I bought my dream set up within 30 minutes (my kid didn’t even have time to complain), then sped home.

To a dark bathroom. The sun had vanished by that time. NOOOO! But I had to try. I had no choice.

No manuals were harmed in the shooting of this camera. Because they didn’t even get opened. The camera got plunked on the new tripod and I started snapping in minutes. 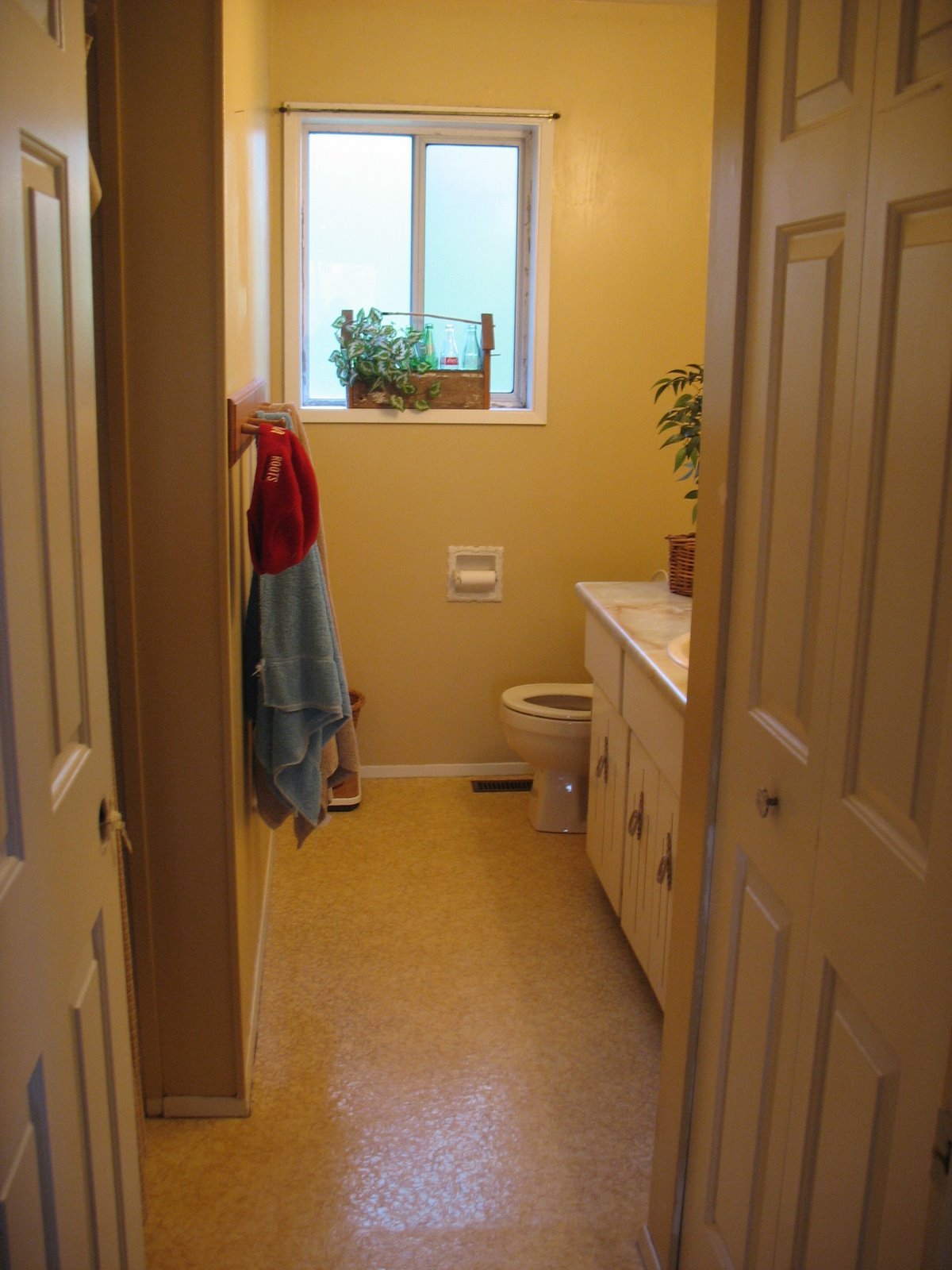 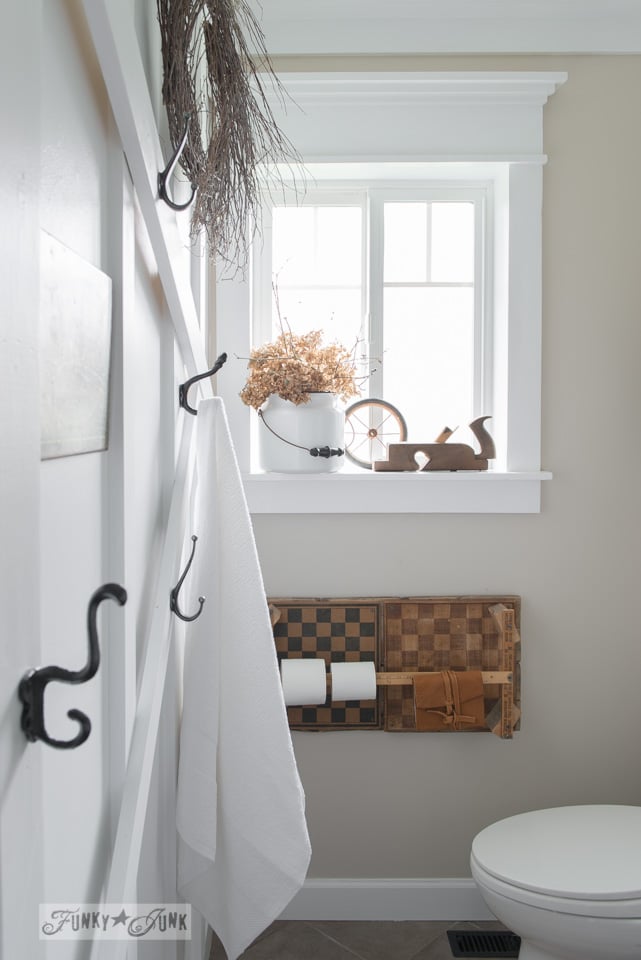 Well, I was stunned. This room was DARK! But that new improved camera showed me a thing or three!

Full frames are amazing for low light interiors which had become a common problem with my old camera. So honestly? After I saw these photos, I was all like ‘funeral at 2:00, party at 2:01!’ No regrets whatsoever!

The post ended up being a success, thanks to all the extras that were done with the room.

But I myself became the biggest winner of all. Because…

I got a pretty cool vanity I fell hard for.

I got a new bathroom I LOVED every square inch of.

I learned so many new skills!

I even got my dream camera!

But can you handle even one other REALLY GOOD THING? 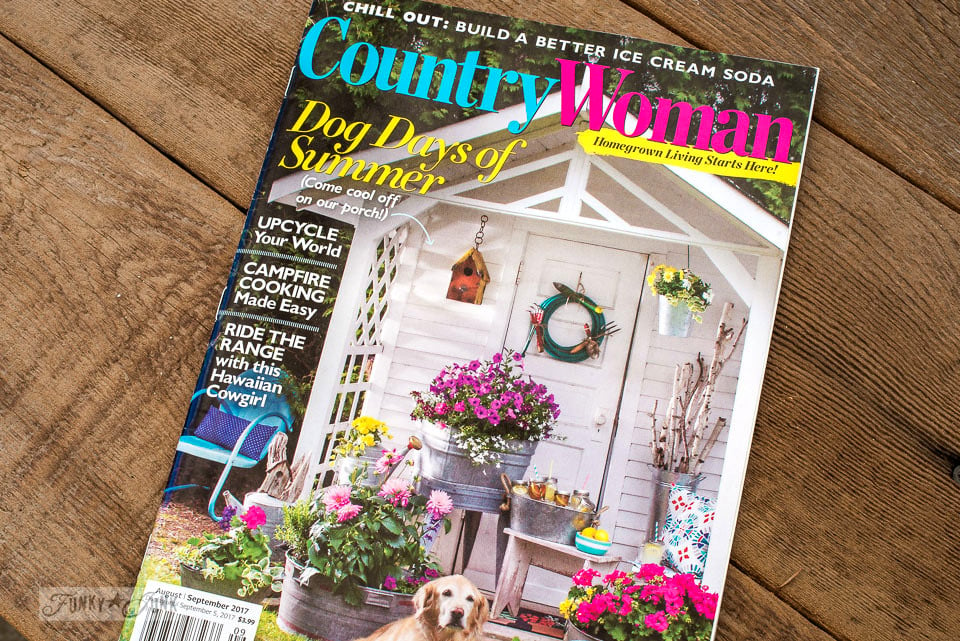 The good folks at Country Woman Magazine loved the outcome so much, they printed it in their Aug Sept 2017 edition! 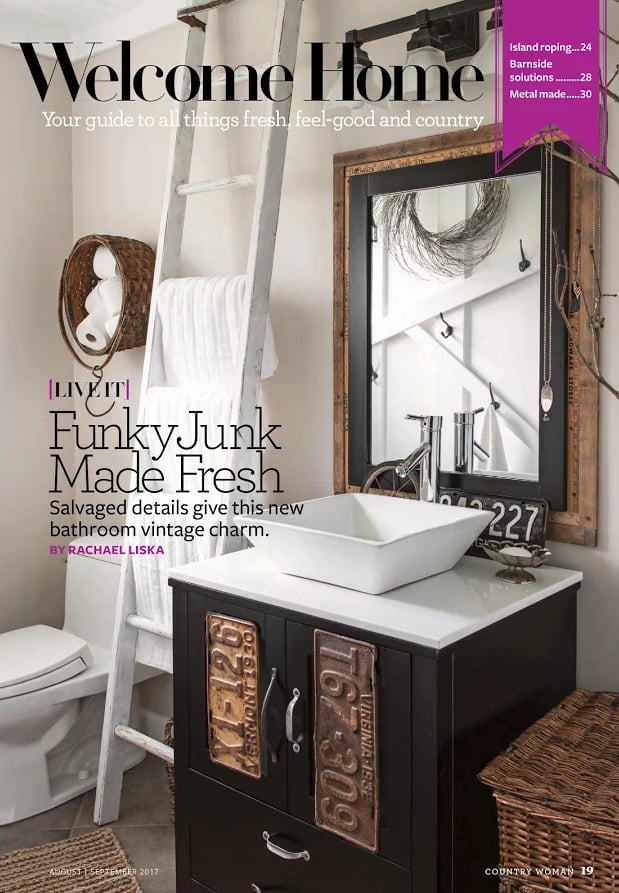 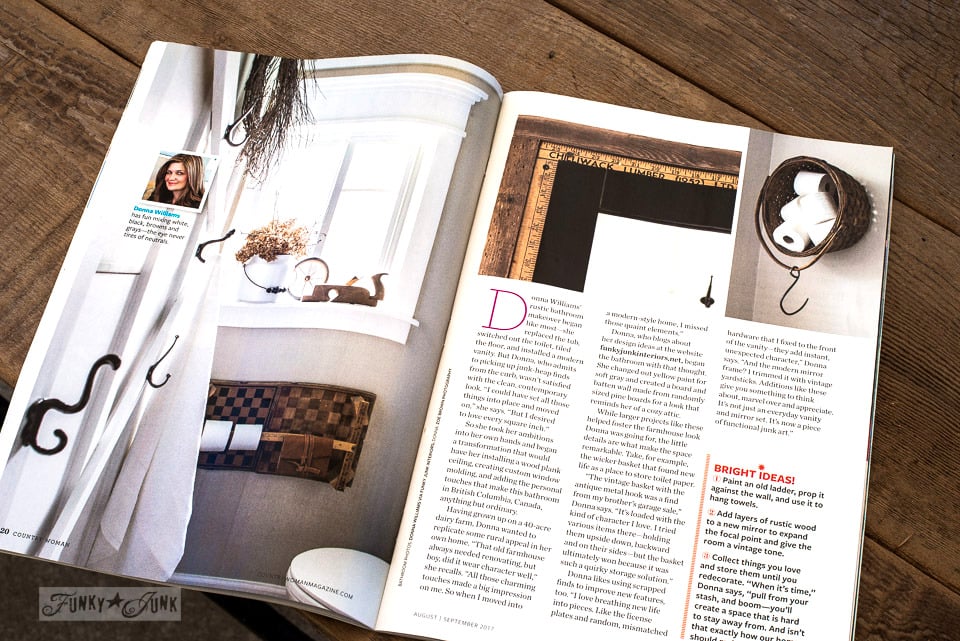 WELL NOW IF THAT ISN’T ONE AMAZING KUDOS…

So often as a blogger of DIY projects, I showcase finished results appearing to be effortlessly whipped out in minutes like on TV. But that is NEVER the case.

Things go wrong for me all the live long day. And sometimes I can really feel the defeat monster.

Well, things are about to change. This little KariAnne-in-your-pocket book will leave you pondering what else you can MAKE go wrong… because, where’s the humour in everything gone right anyway? 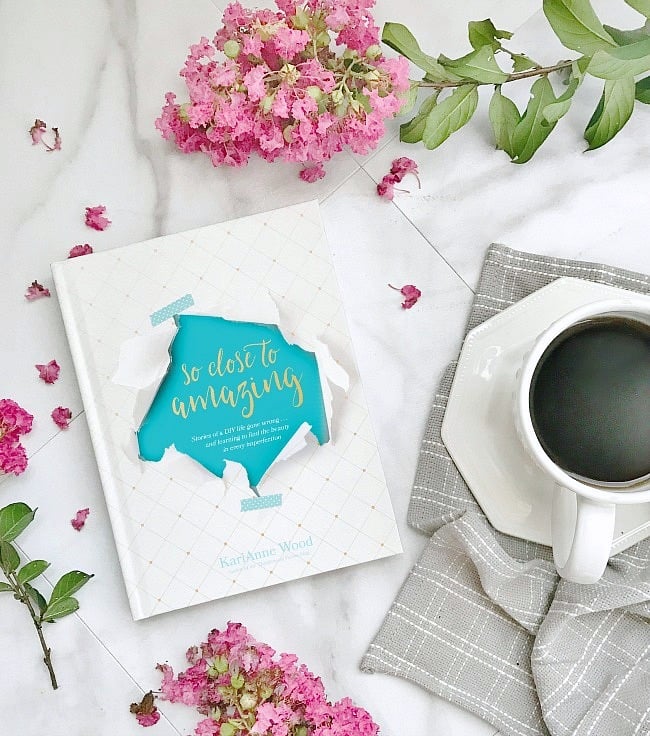 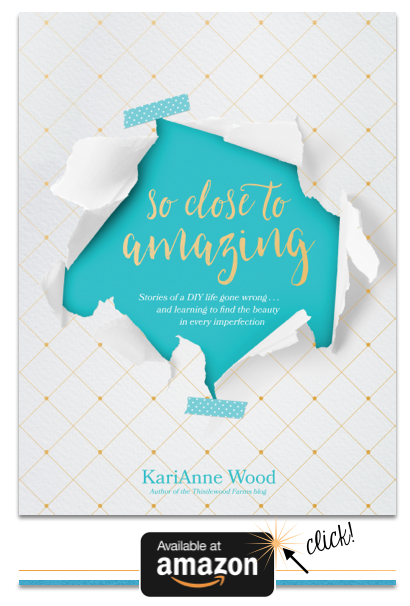 You can order / read a little bit of So Close To Amazing on Amazon HERE. (affiliate link)

Thanks KariAnne, for being so blunderfully amazing!
.
.
Care to share your own story of something gone so comically wrong, it couldn’t help but become a right? I’d love to hear it!
.

Disclosure: I was gifted this book, and honestly enjoyed the upbeat writing so much! Therapy if you will. Highly recommend. While I was not compensated for anything in this post, it does contain Amazon affiliate links.