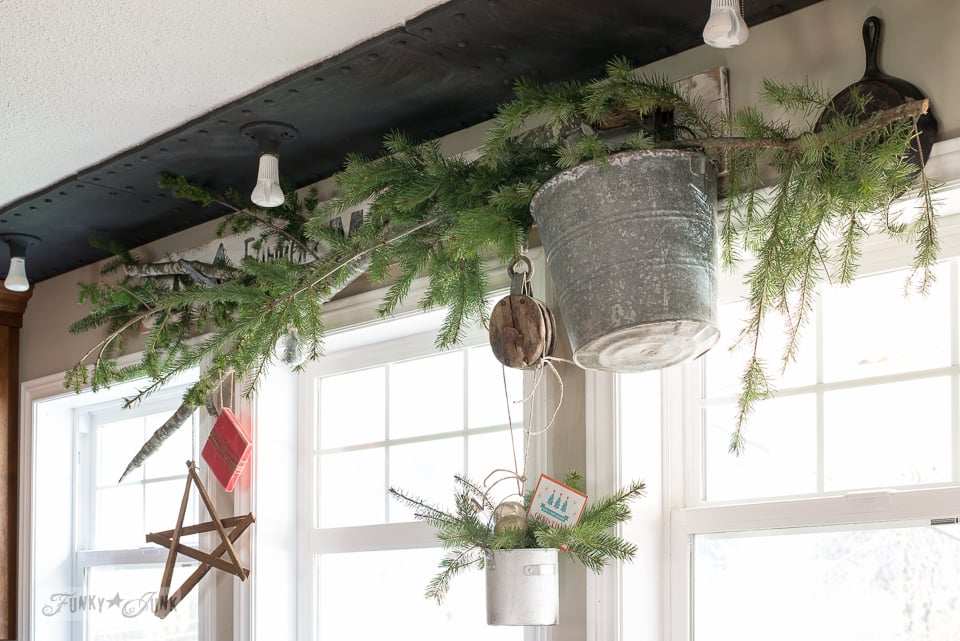 Our lead up to Christmas had the strangest twists this year.

All kinds of things happened, that required my time in other places other than decorating and preparing for Christmas properly.

So when Christmas Eve arrived, I decided to gift myself with a clean, company ready home, even if no one visited it but us. Every paint can and brush and tool went downstairs, and every square inch was taken care of to sparkling perfection.

But I will admit this. Starting From Crap to Clean before Christmas back in September paid off in spades! Working in freshly painted rooms and emptier spaces really made the difference.

There was only one thing lacking.

I had done the fireplace mantel and put the tree up, but that’s it.

So as I cleaned one room at a time, I started added little 5 minute junk inspired Christmas decorating ideas to each room, to chime in with the season.

So… if you ever run late, never fear! Maybe some of these more minimalist approaches would work quickly for you too. 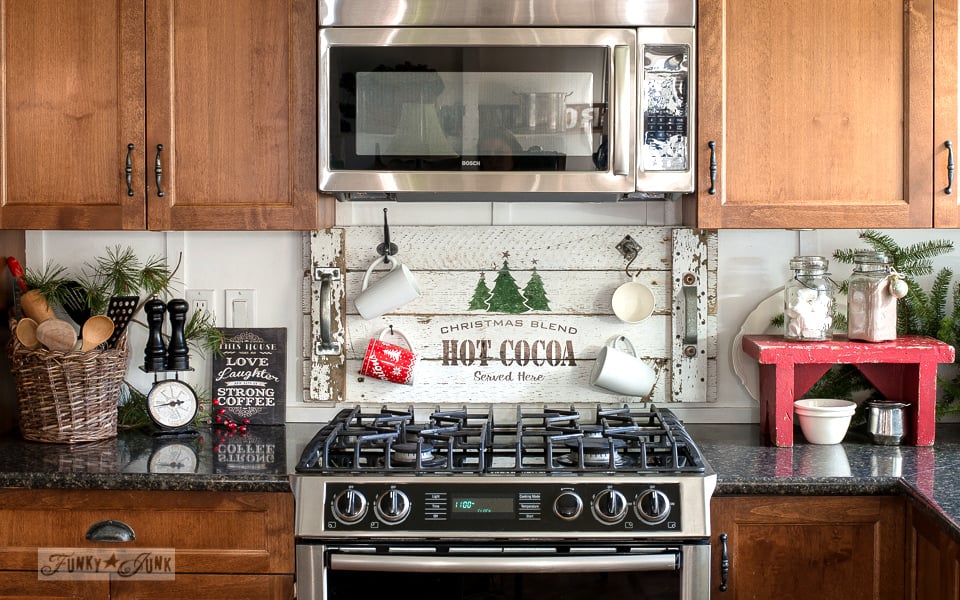 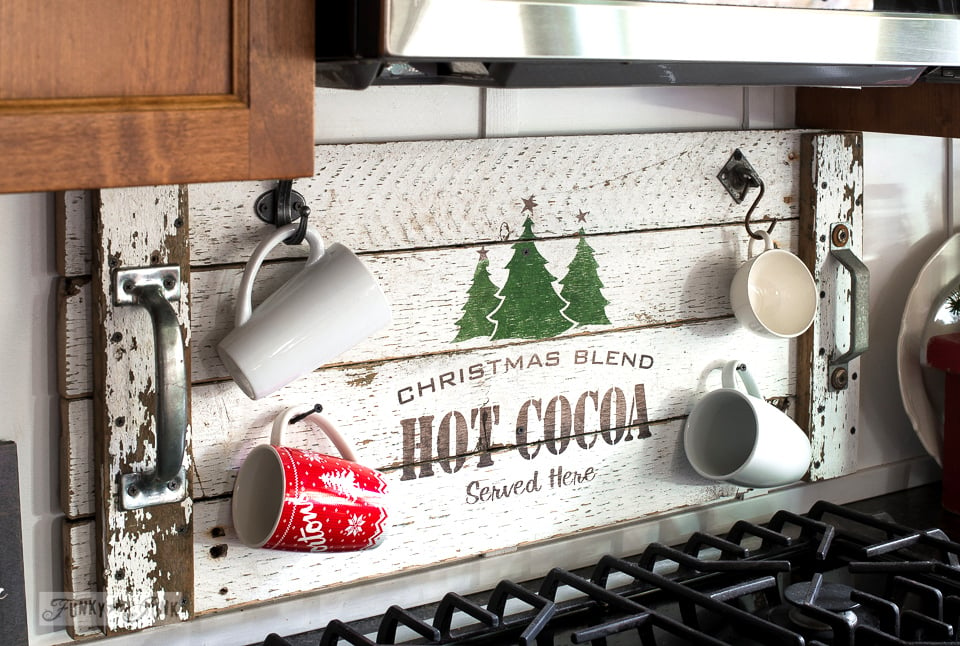 Think easy, like hanging up a Hot Cocoa Christmas tray and turning it into a festive cup holder behind the stove.

The fit was perfect! 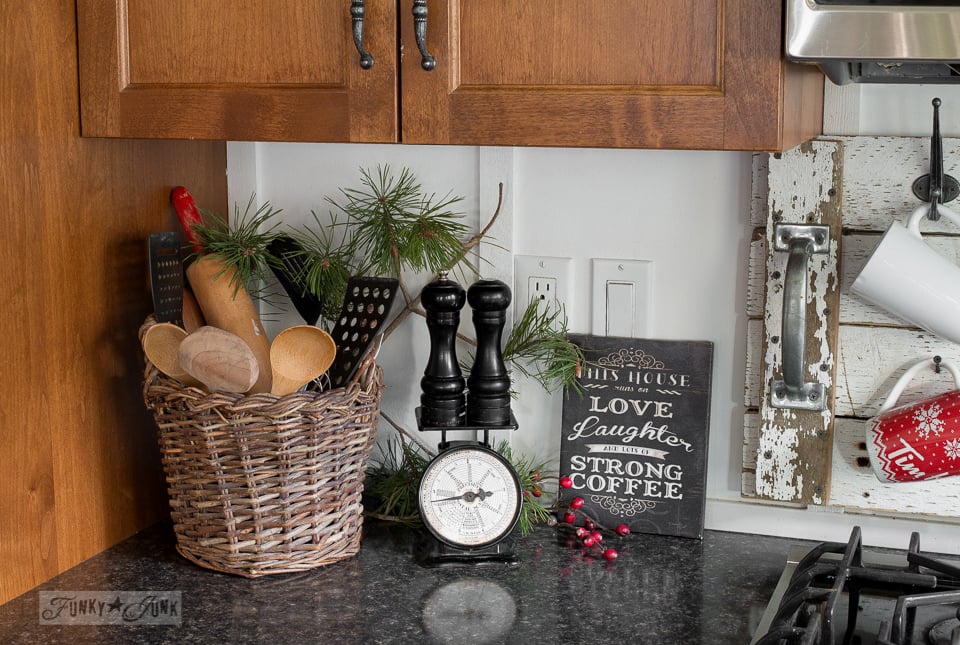 The strong coffee sign was a Christmas gift from neighbour Janette! Isn’t it perfect? 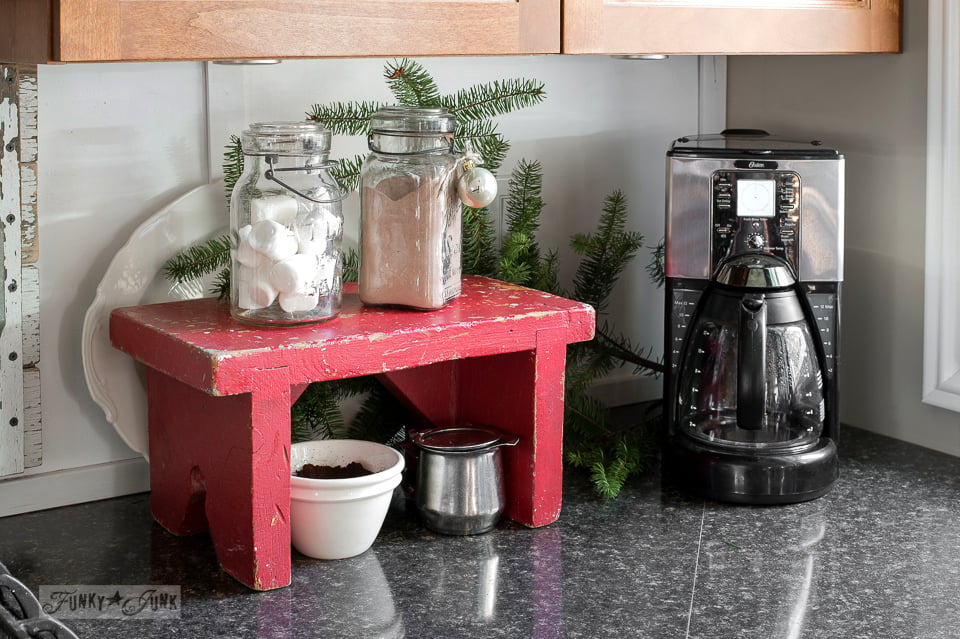 One evergreen branch placed behind stuff that’s normally always there was truly all that was needed.

With the addition of hot cocoa fixings of course! Which worked well on my chippy, red vintage coffee station bench. 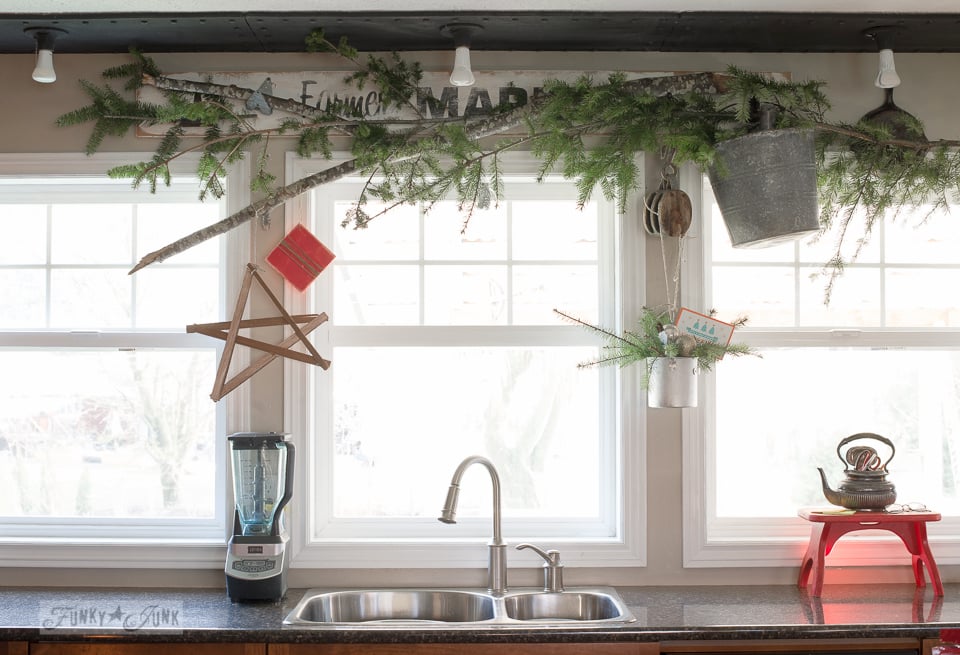 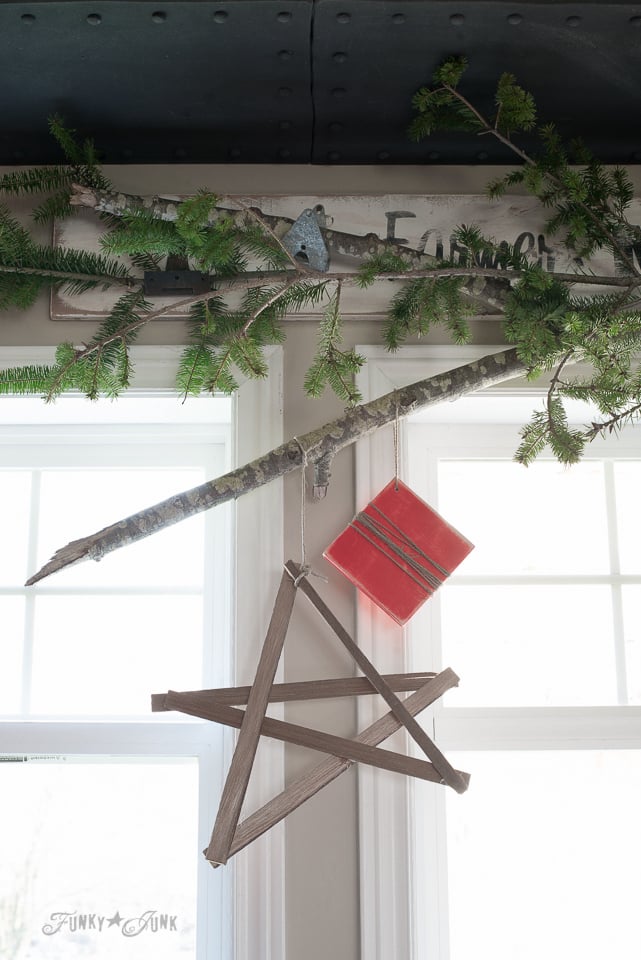 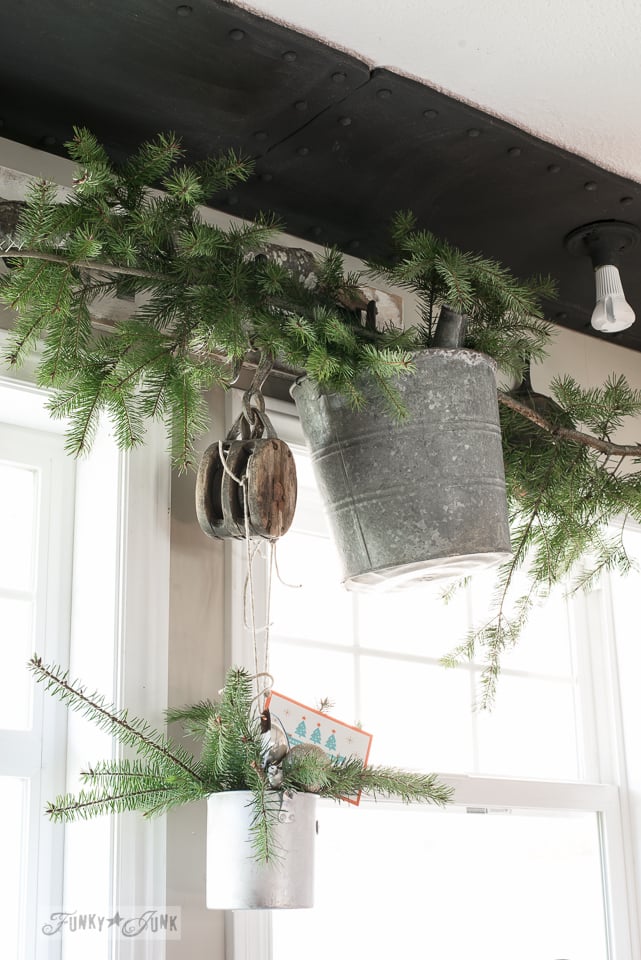 Three branches were hung above the kitchen windows, one just wood, the other two evergreen, offering a forest styled valance.

I left the blender in place, because that’s the reality of this season. With my son’s wisdom teeth removed, this blender is important. 🙂 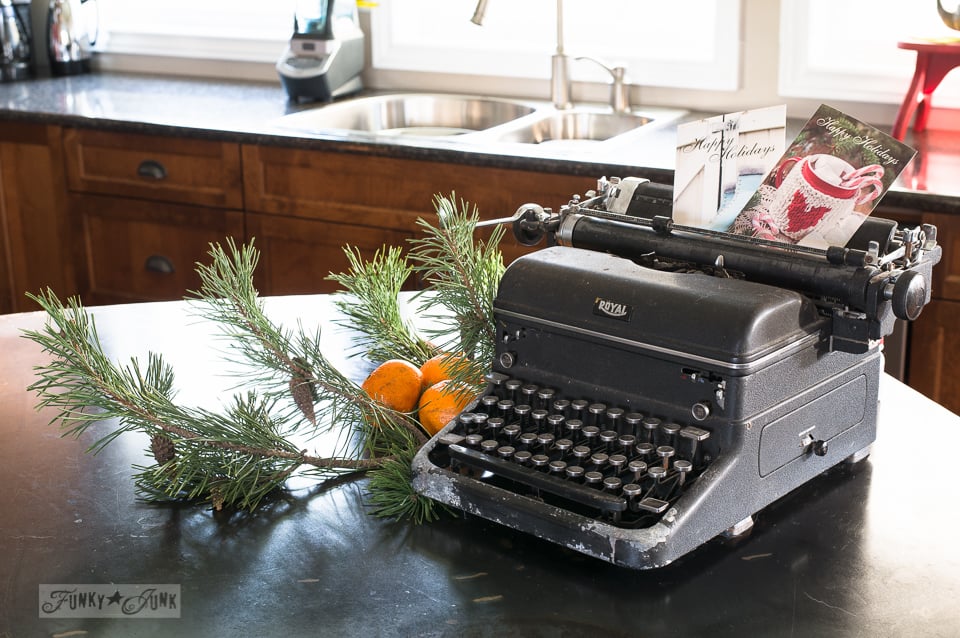 The old typewriter vignette happened out of pure laziness. It’s HEAVY. And was sitting on a chair upstairs for months, waiting for a willing set of hands to give me a hand. It was just forgotten.

So I plunked it on the kitchen island, and dressed it up with one evergreen branch, oranges and a couple of Christmas cards. 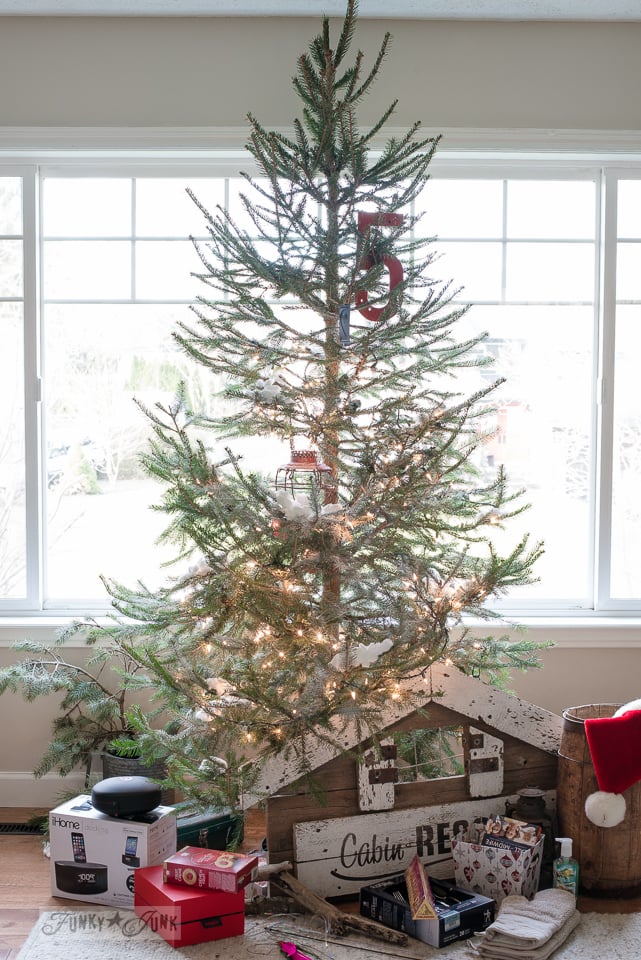 This year’s Christmas tree going up.

Here’s the aftermath of Christmas under the tree, with a few gifts revealed.

We always leave them under the tree until the works is cleaned up after New Year’s at some point. The tree is not in our way, so it’s welcome to stay as long as it decides to keep its needles. 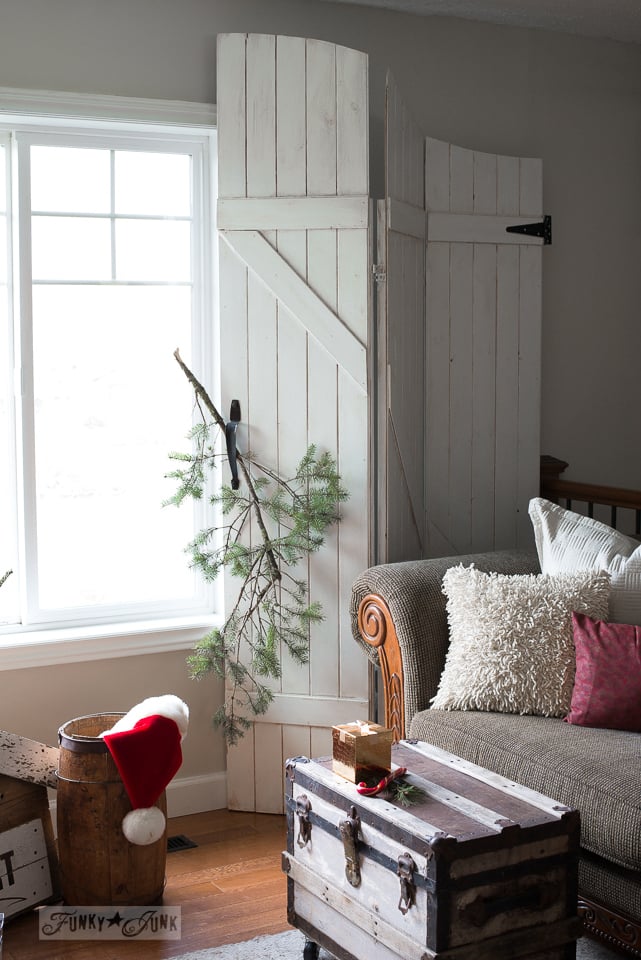 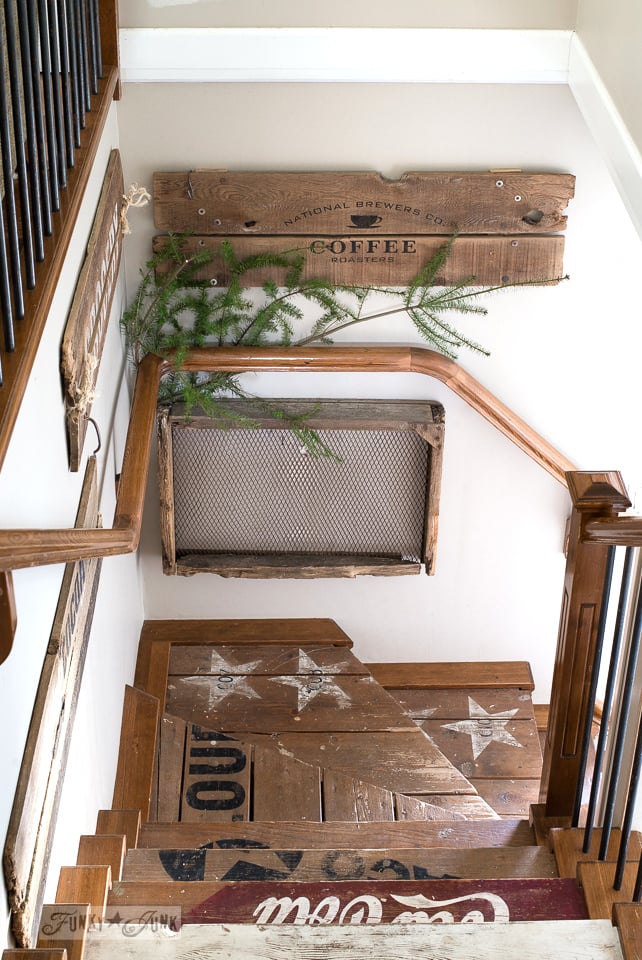 The stairway is so simple, clean, woodsy, rustic. Just the way I like it. I think it’s my fav Christmas stairway decor thus far!

Boy, did things get a whole lot simpler… 🙂

The area just feels bigger and brighter, and is super easy on the eyes. 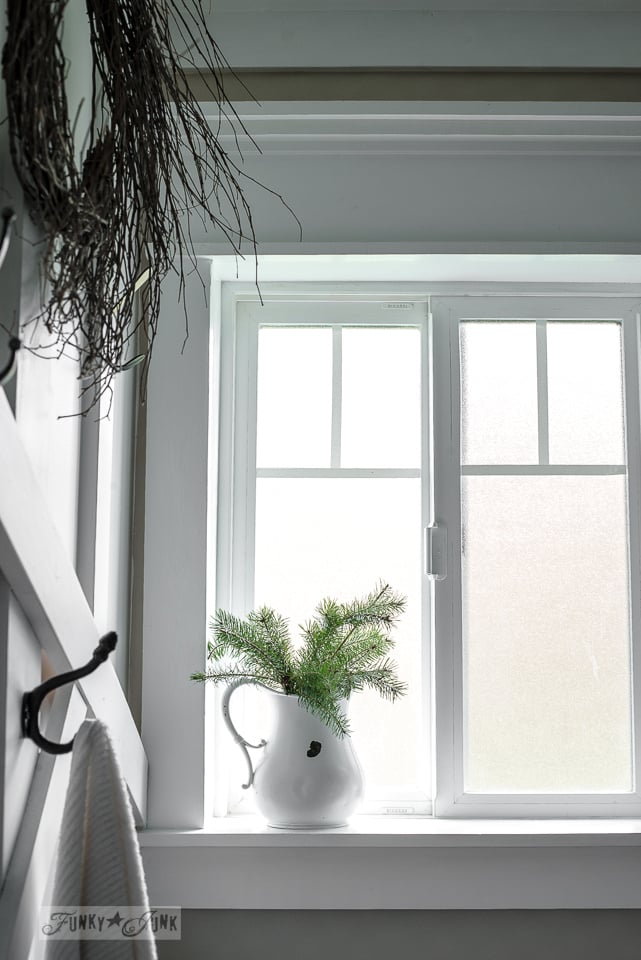 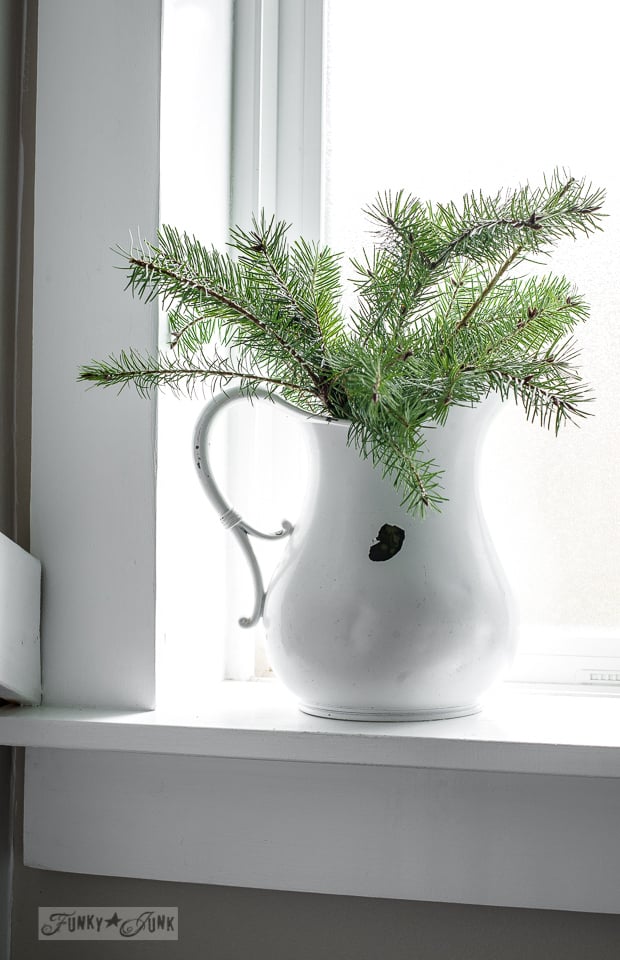 My son doesn’t like stuff on the window sill, so it gets moved frequently. One white pitcher of greens will be more than enough for him to handle. 🙂 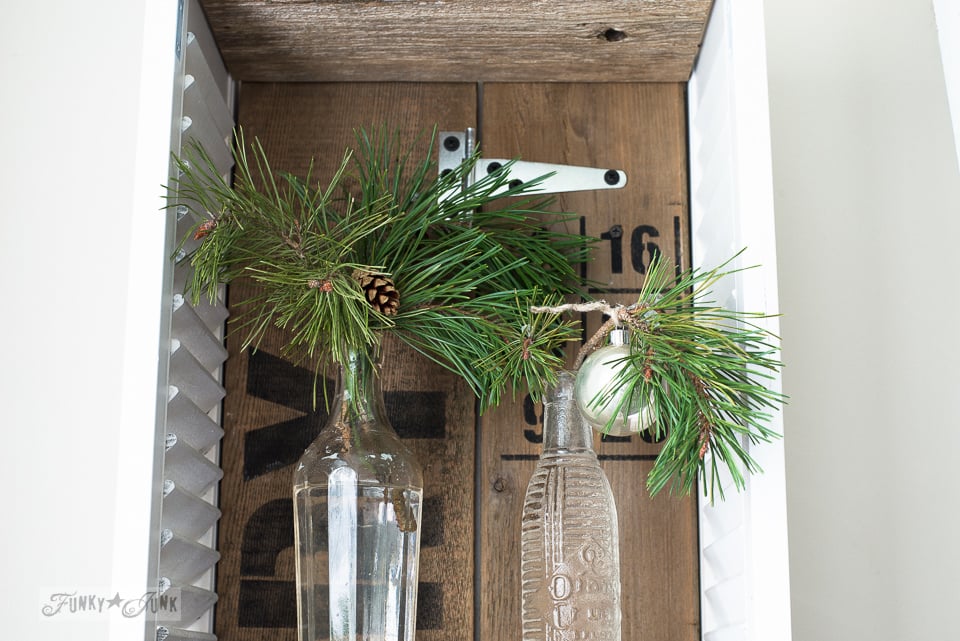 The shutter shelf hanging from the toilet faced wall was the perfect place to get a tiny bit fussier. 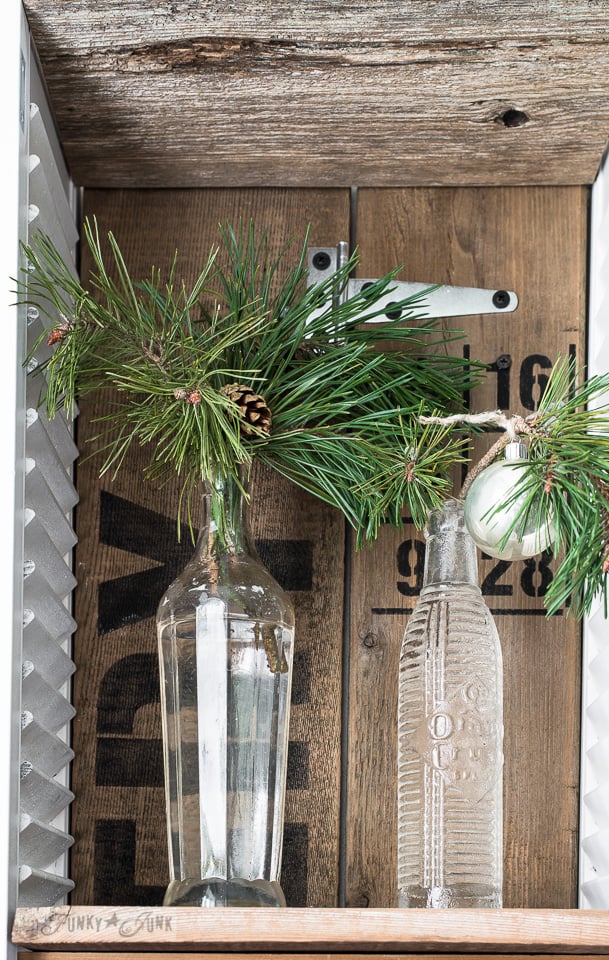 Two water filled soda bottles and greens, and it was deemed done. 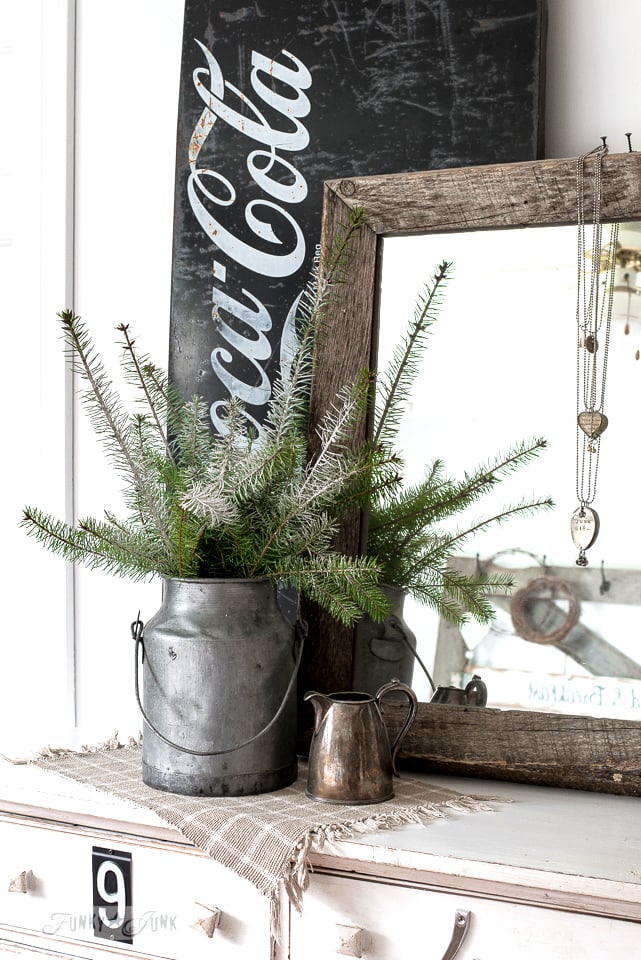 The master bedroom is where I love to spend time when my son currently rules the TV with either a game or his kinda show.

The hydrangeas on the dresser were simply swapped out for evergreen branches, lightly misted with snow spray. 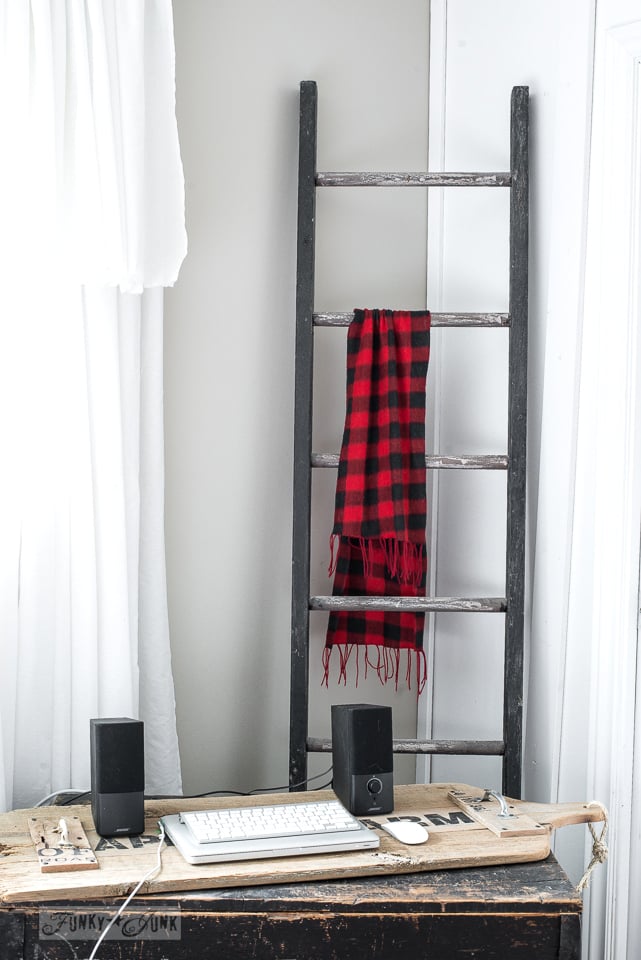 Since this is my escape to a chick flick Netfix fix, my movie gear is sitting on my oversized cutting board tray, ready to roll. 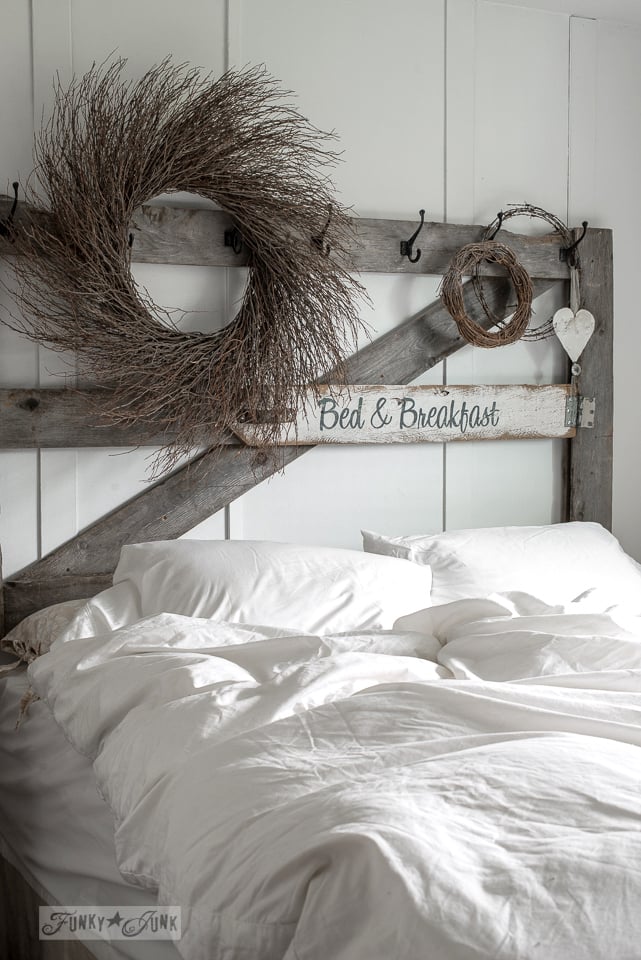 Don’t laugh… ok, laugh. 🙂 But I leave the bed relatively unmade (or made messy) to rumply crumply white on white perfection. It’s like a ‘welcome to dive right on in!’ any time I desire.

I never did make those Christmas pillows or pick up a pretty red plaid blanket I had in mind. Maybe next year! 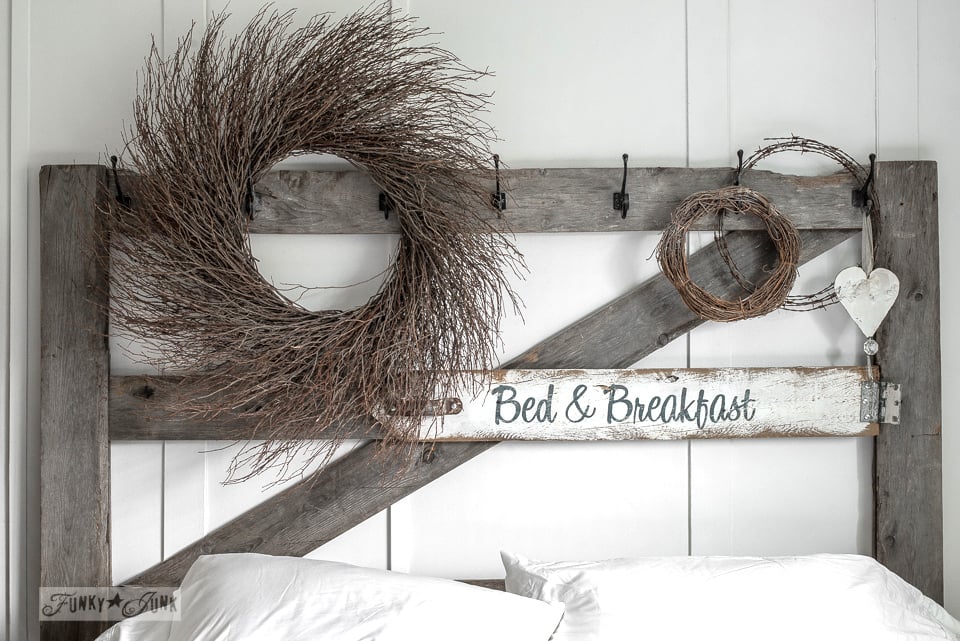 The bed and breakfast sign was a 5 minute decision back in summer that I’ve never shown you. 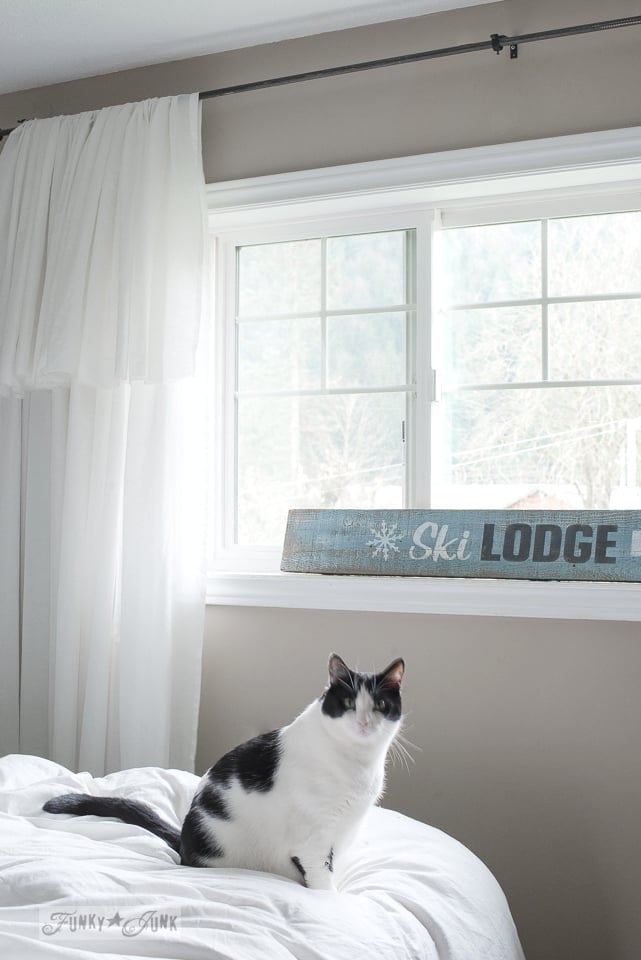 And my fuzzy-kitty-slow-shutter-pic caught a little simple Ski Lodge sign action on the window sill.

I will say this. Decorating for ‘me’ on ‘my own time’ for Christmas was a welcome, much cleaner, and less stressful treat.

We are still living out the season for another week, so I don’t yet know what it’ll all hold.

I was alone yesterday, so I hopped on the bike and went for a chilly trail ride and even found a little snow. (will show you soon!)

I’ve been snacking on Toblerones and other things we generally never have in the house.

I think I’m simply healing from too much busy. So I’m not going to rush a thing and let time evolve.

But first, I think it’s time to reheat some homemade soup, while I catch another Fixer Upper rerun… and hopefully get inspired into action myself!

How early do you do your decorating? Ever go this last minute before?