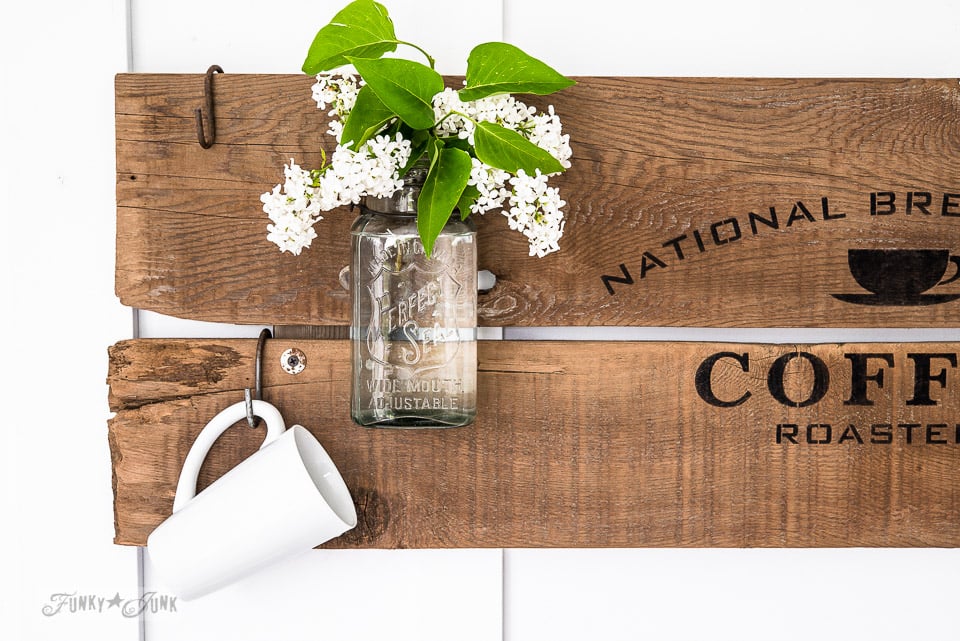 Ahh!! I am home from my travels! And as you can imagine, I have a little catching up to do. And so much to tell you.

But honestly, I missed creating so much, I got right into it my first day home. Why hotels aren’t yet outfitted with workshops I do not know.

BUT… new towns come complete with antiques… so I’m showcasing one souvenir today that I picked up from Nevada!

I’m trying to think up new ideas for all that fence wood I hauled home awhile back to get ready for The Olde Farmhouse Vintage Market.

And today, I ended up with a reclaimed wood old sign coffee station that would compliment any farmhouse kitchen decor.

Wanna see? It’s really cute! And so easy to make! 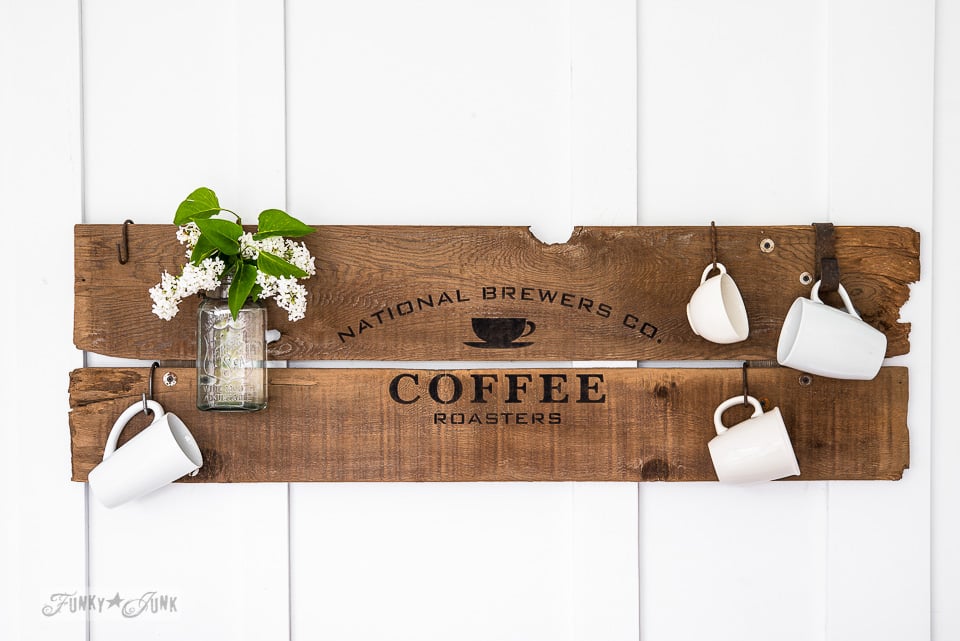 An old sign with a twist… on two planks instead of one!

But there’s also a reason I spaced out the boards… look close. 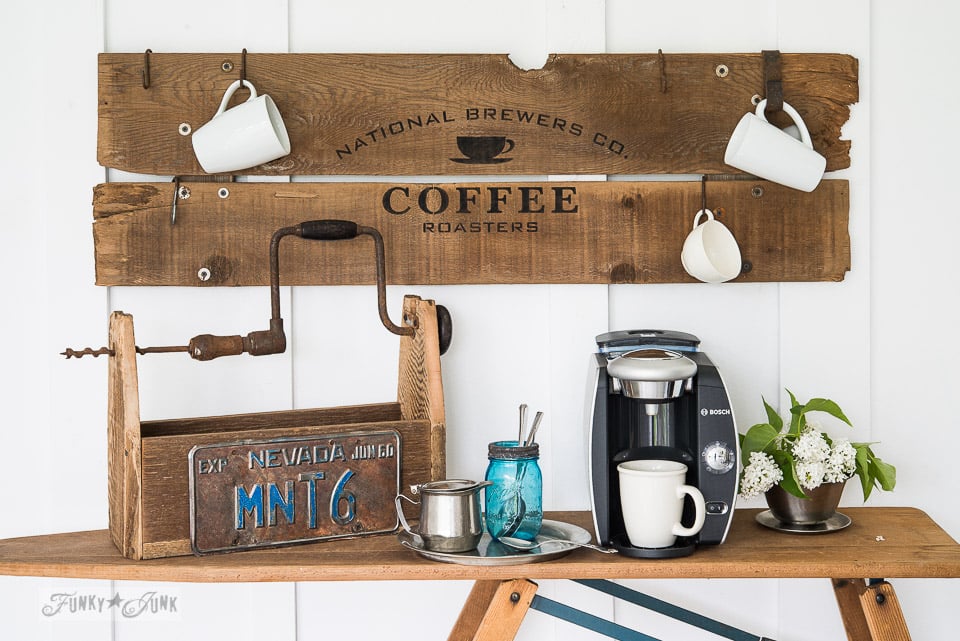 The gap allowed for S hooks so you could hang mugs. Or other stuff. But in my house, it’s mugs. Dunno why…

So I threw together a little coffee station idea using my own National Brewers Coffee stencil, that is so easy to make, you’ll want 2! More coffee for all! mmm….

Here’s how I made it: 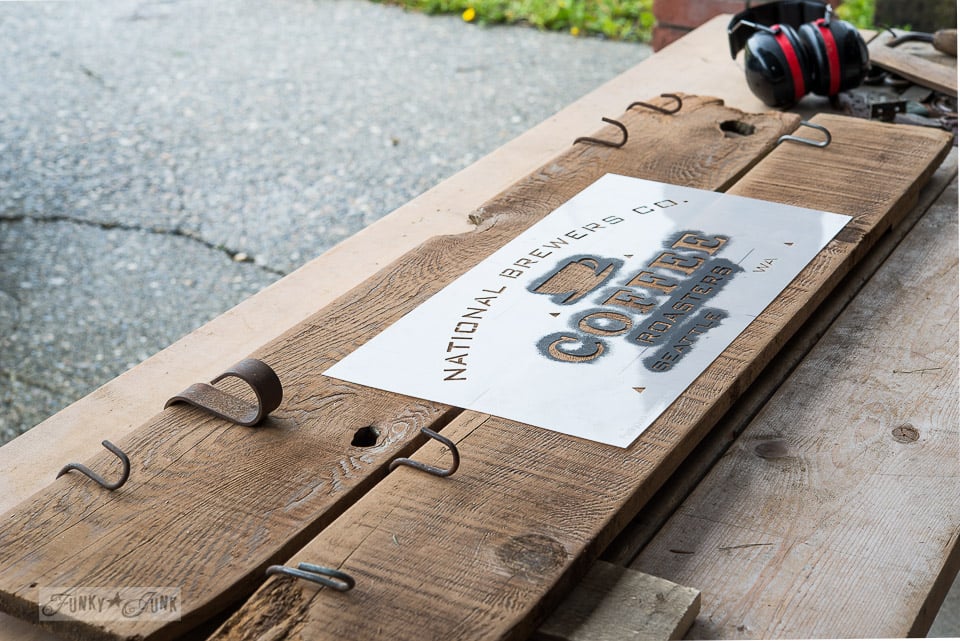 Here’s how the boards are structured.

The plans above took me nearly all day to draw, so don’t lose them now… 😉

I’d love to learn how to draw in a 3D program one day. One day… 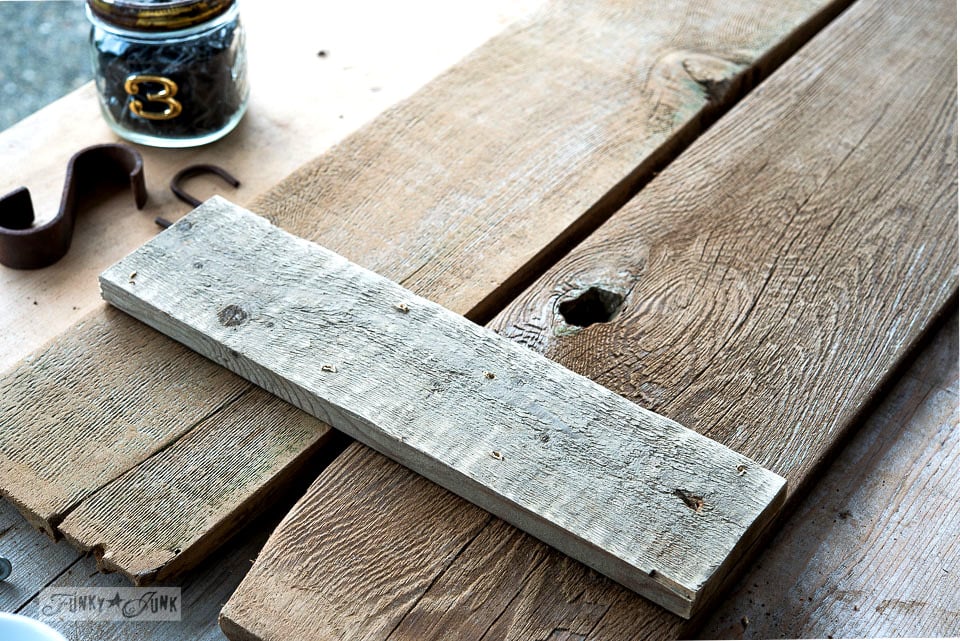 Here are the cross planks from underneath that will hold the sign together. 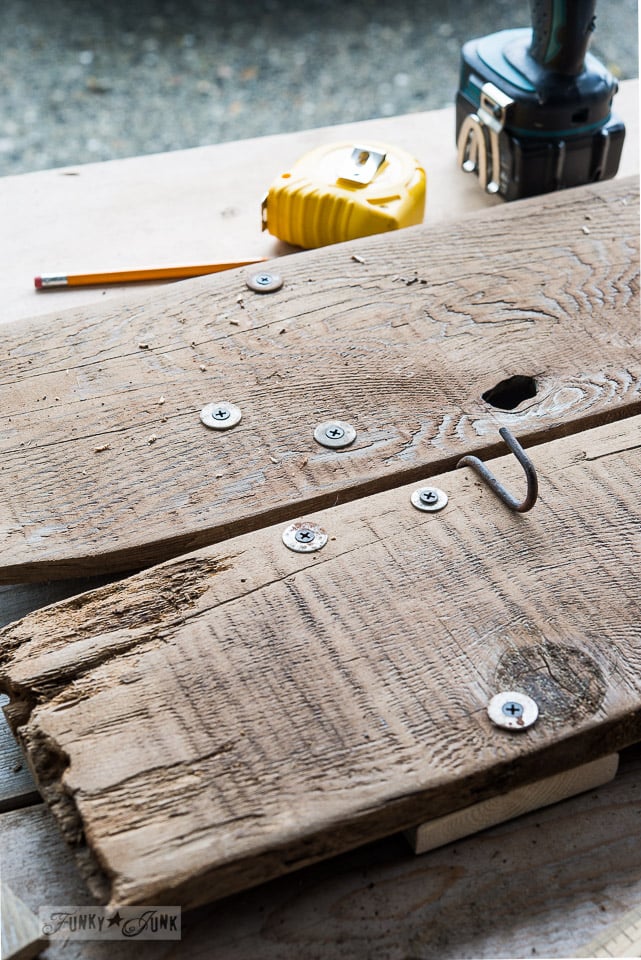 But because I don’t do anything really all that predictable, they were screwed together in a rather random method.

So if you EVER land a bucket of rusty washers, don’t bypass them. Ever.

Better than diamonds I say!

I still like diamonds though too… in case… of no idea what. Just playing it safe here. 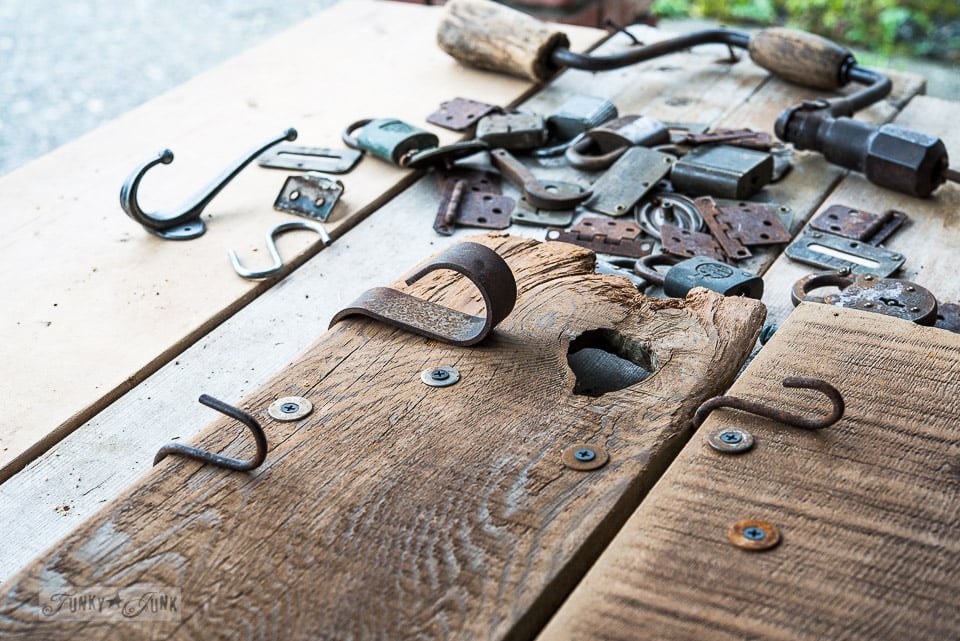 The support boards were placed on the back so the sign projected off the wall to allow for the rusty S hooks.

I know. It’s weird, but I go to great lengths to think this stuff up so it’s new to me, and hopefully new to you.

Or maybe it’s all the caffeine… 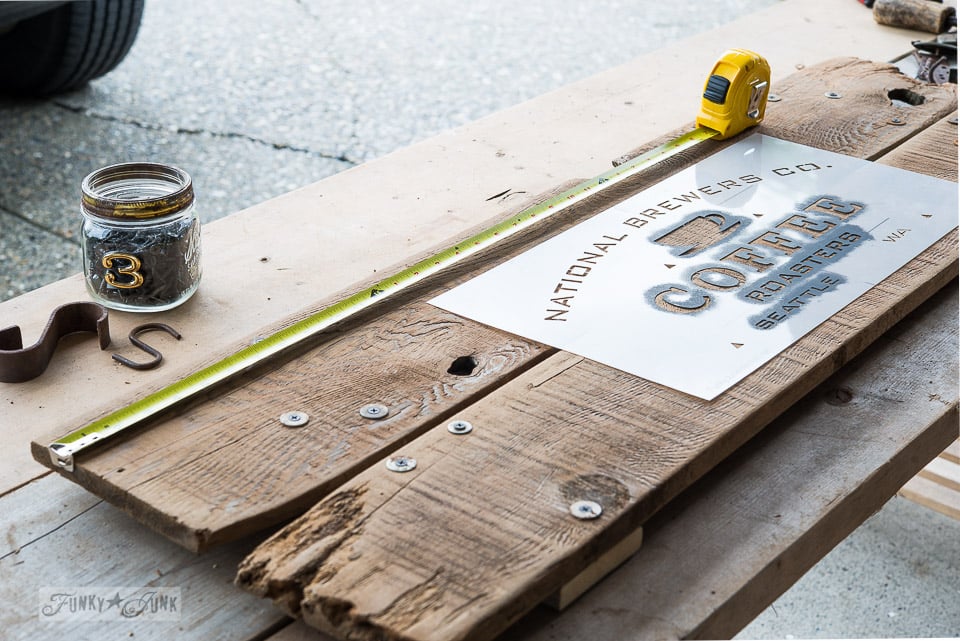 So now that ‘the intense’ build is done, it’s time to centre the coffee stencil. 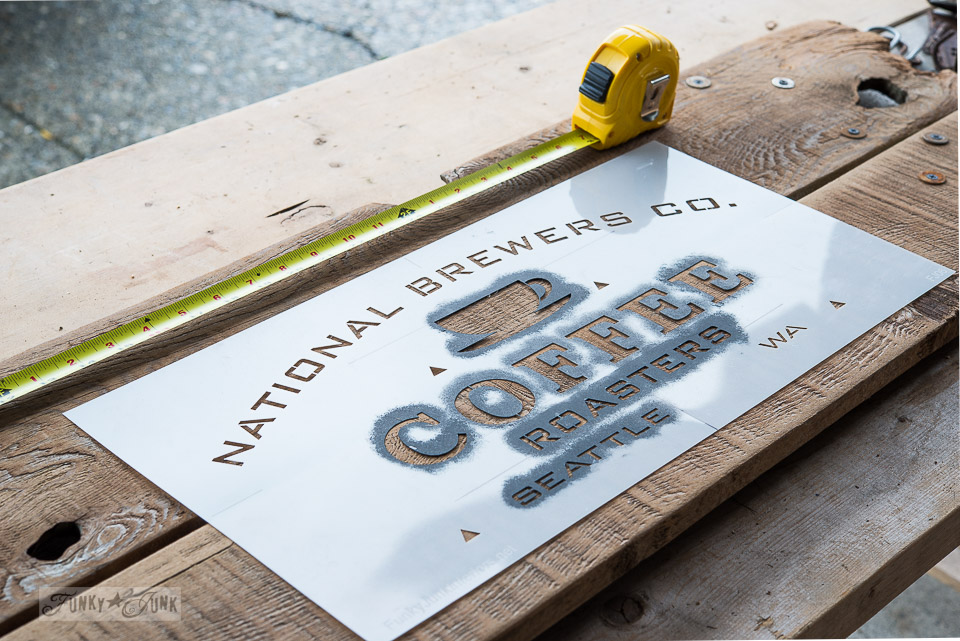 Mark the centre of your board and you’re done, because there are also centre marks on the stencil. 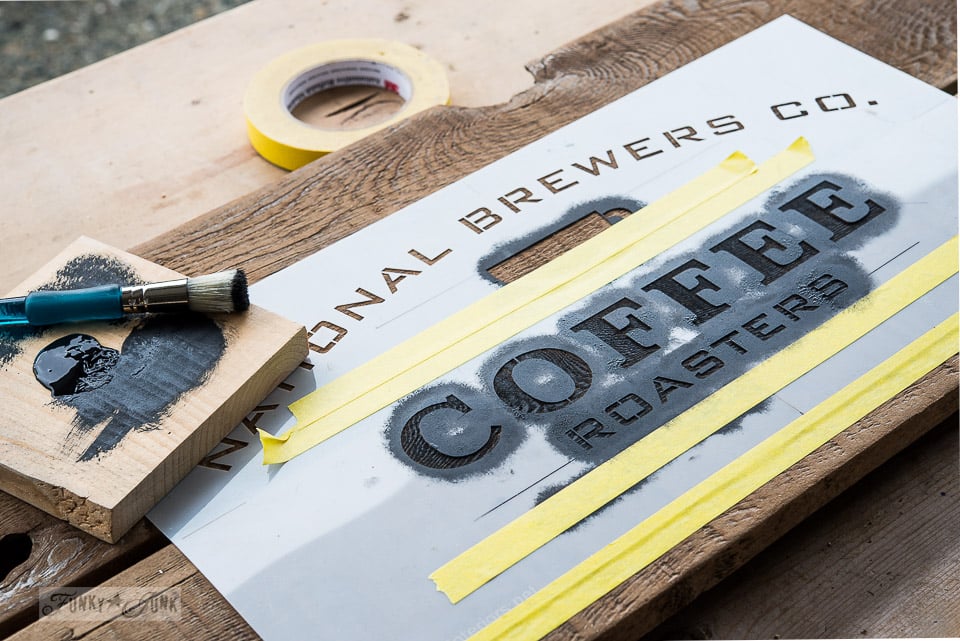 The less math, the better, don’t you agree?

Because I split the sign onto two boards, I needed to separate the stencil design.

So I taped off parts of the stencil I decided not to use, in order for the lettering to be all nice and evenly spaced from the top and bottom on both planks. 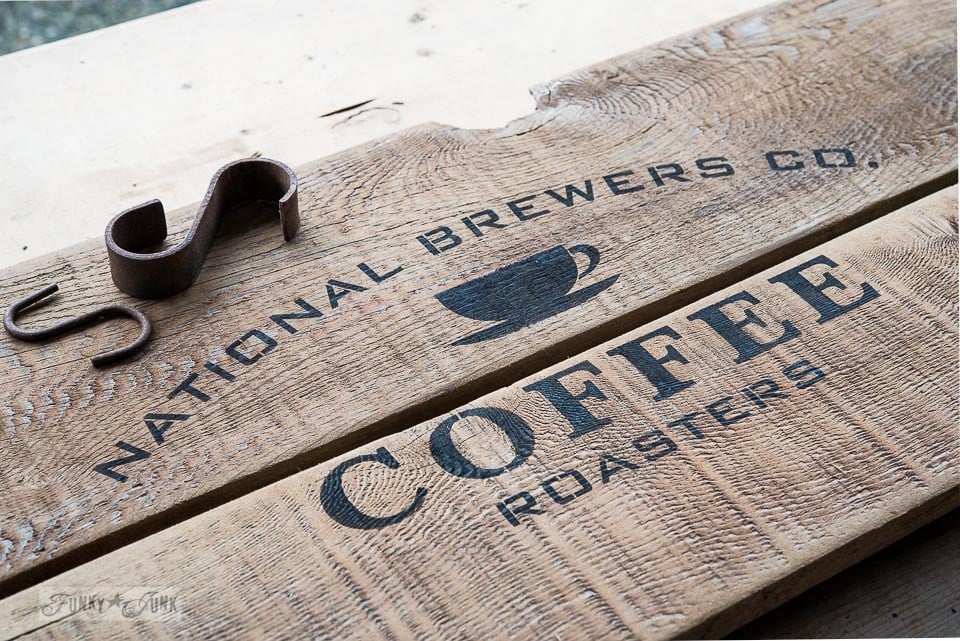 My beloved trademark crate markings of black on wood won once again.

Sigh… there’s a whooooole lotta love goin’ on in this picture! 5 of my favorite things. Can you guess them all?

I’ll tell you (crate markings) at the end (rust) of the post (coffee) so you have time (reclaimed wood) to (old sign) guess. 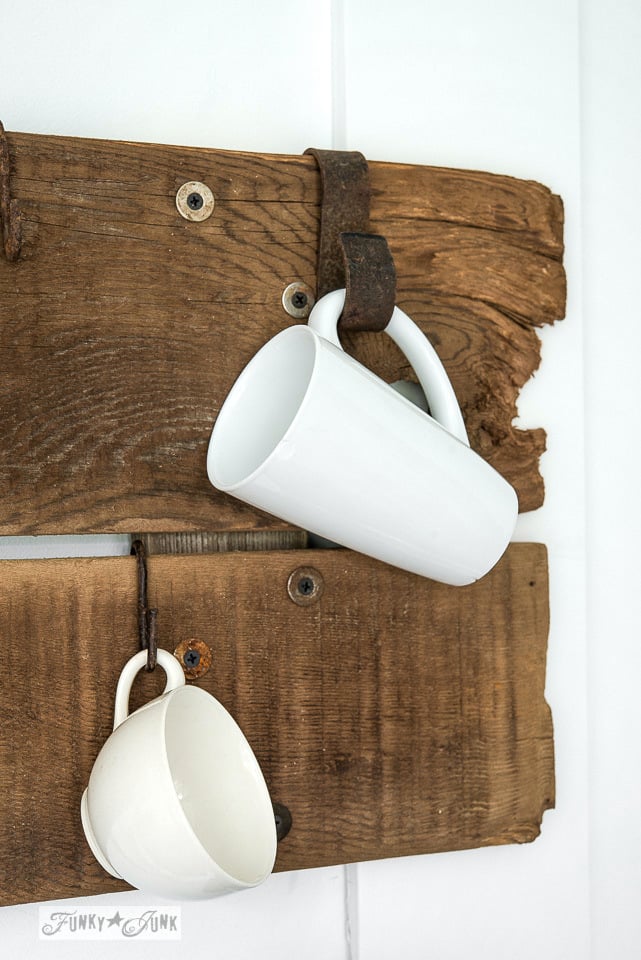 To be more food safe, a light spray of clear sealer on the S hooks would be a good idea.

I personally left the S hooks and wood untouched.

This simple, yet cute little coffee station on a vintage ironing board was a snap to put together! 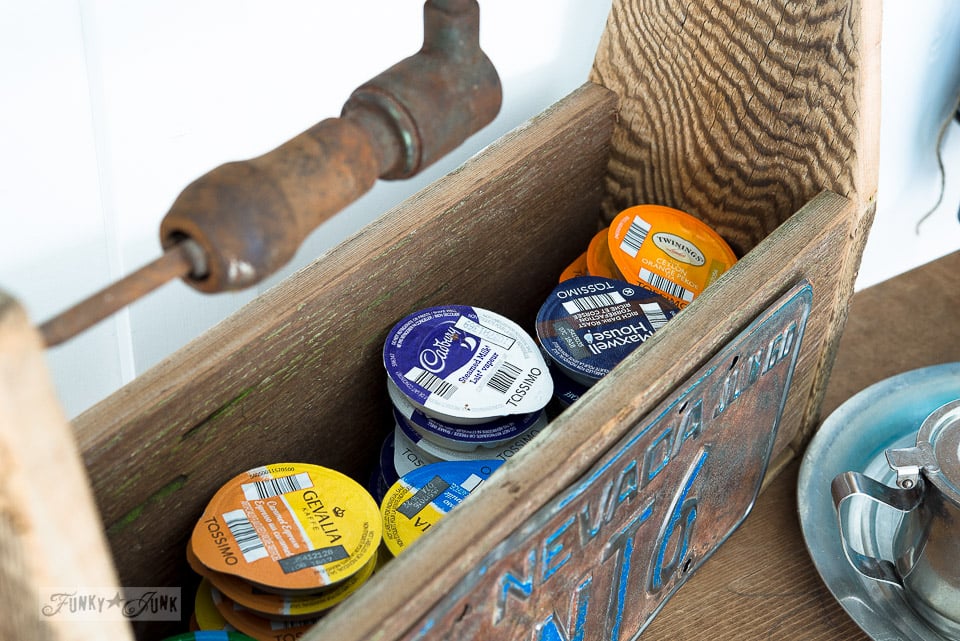 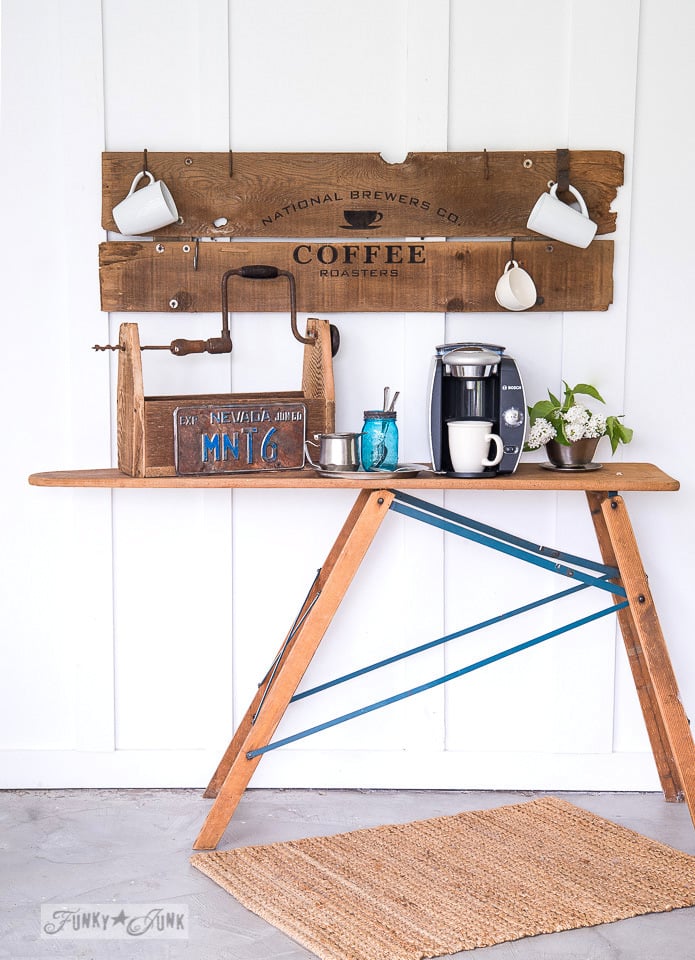 But then again, isn’t it always? 🙂 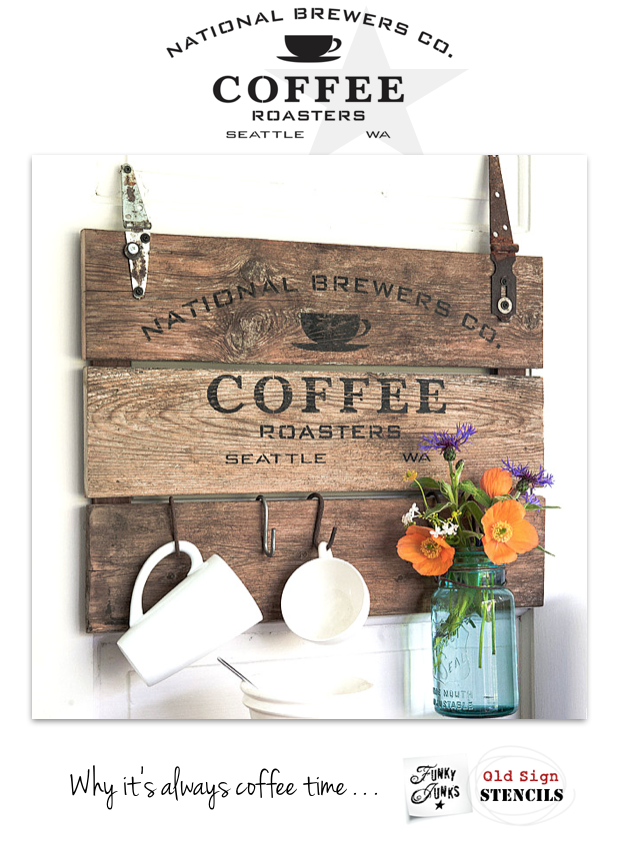