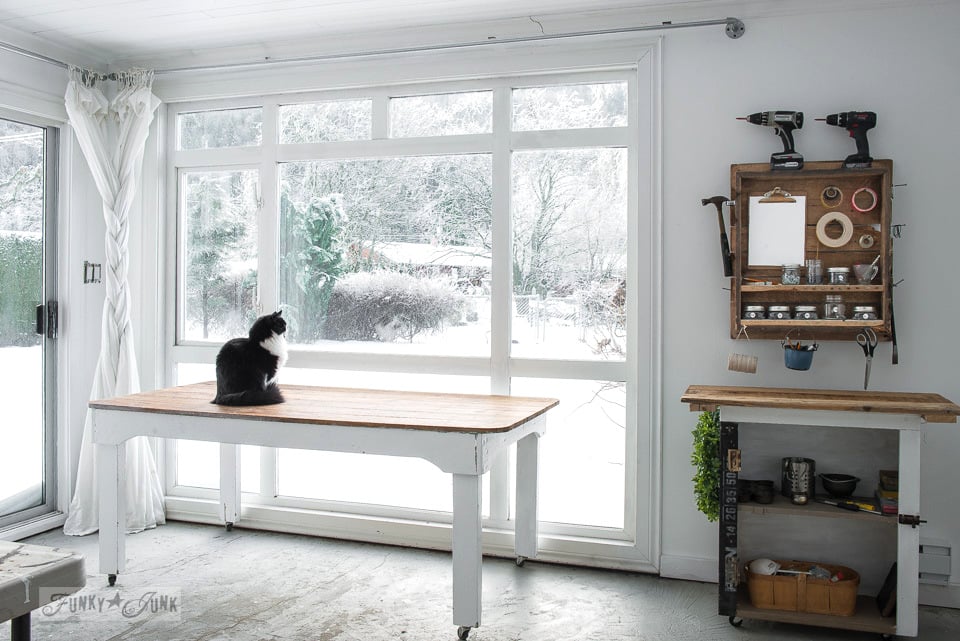 Right before Christmas I went on a rampage to make my son a gift.

Who builds 1 week before Christmas?!

While you were wrapping and baking and shopping, I was tripping over power tools late into the evening in this very room, building, painting, then finally staging said gift. Coming soon.

After that was a done deal, I packed up his gift into my truck, then made a beeline for the kitchen to do what was needed there.

Did I forget to mention I was working on all this the entire week before Christmas INCLUDING Christmas AM?

After the big Christmas storm blew over, I had full intentions of playing with family for the rest of the week.

And then we were hit with a massive ice storm I showed you in THIS post.

Well! That changed a few things because I was going nowhere anytime soon. So with a big massive sigh, I faced the after-Christmas wrath I left behind in this space. 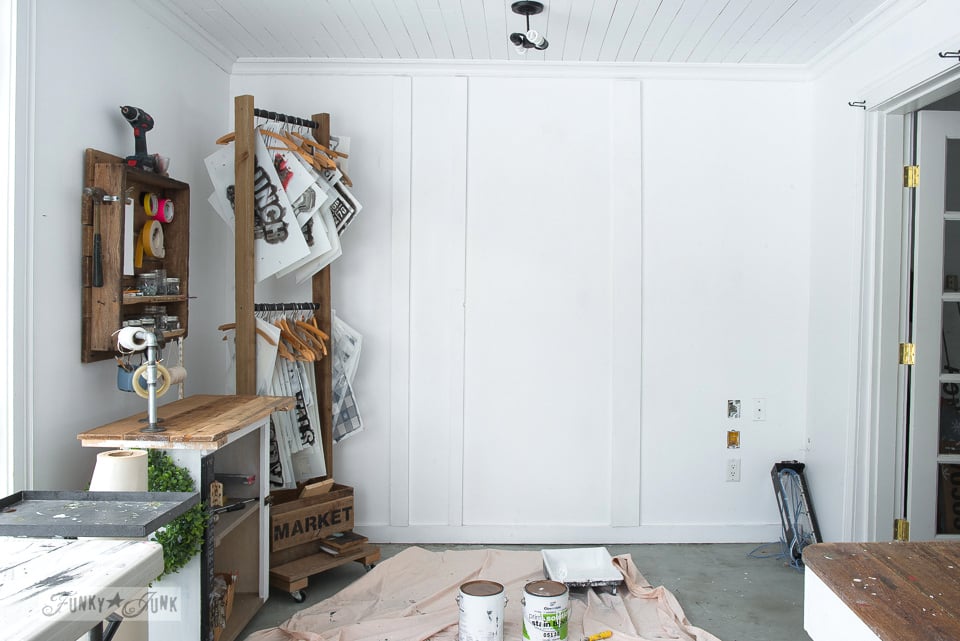 And it was bad.

It was actually SO bad, I couldn’t even bring myself to take a picture of it.

Inch by inch, I started putting things back where they belonged while enjoying the big snow storm outside.

Everything seems more fun when it snows out, doesn’t it? Thank goodness for small miracles.

Once the room was clean, it was ready to use again except for the long back wall.

This wall is where I stage most things. And it was riddled with holes, so it needed repainting.

Filling the holes, the wall was rolled. So nice! And that’s when I decided to keep going juuuust a little further. So I moved EVERYTHING into the middle of the room, and went for it. 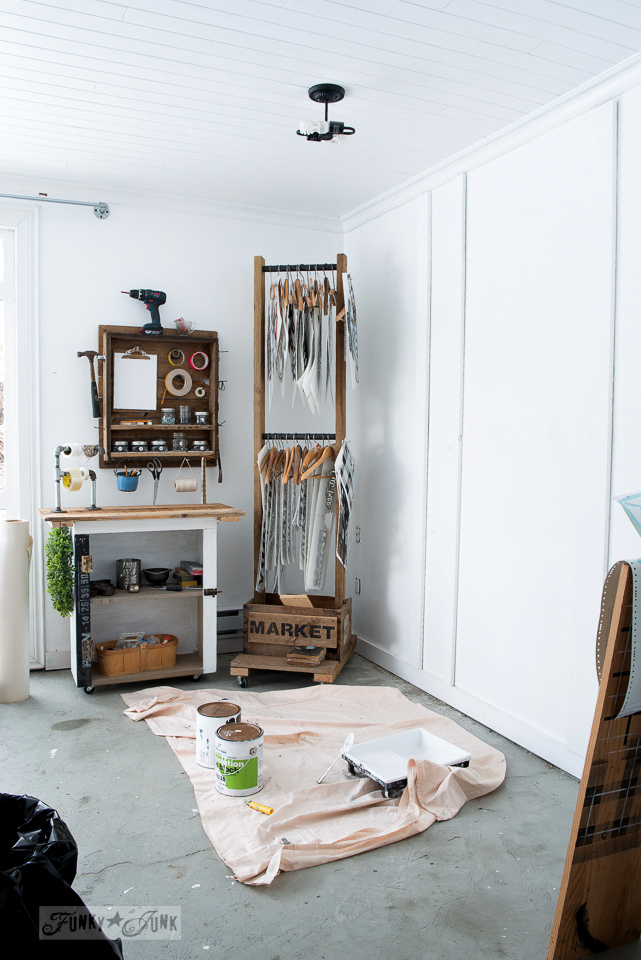 Once the entire room was finished, I pulled everything back into their places and… hated it.

The problem? It was still too cluttered.

When I need to shoot something along that big white wall, the stencil trolley is almost always in the way. So when I move that, I have to move the cupboard too. Too much moving!

I had just completed a silly little Insta Story clip on my cat howling upstairs while I worked downstairs. Once I found him, I filmed him asking what his problem was.

But that wouldn’t have made much sense if I didn’t keep going. So I told myself to finish the story. I then filmed him hopping on the kitchen island eating from a half empty bowl. Pretending that was his BIG issue, I then filmed shaking the bowl to fill it again and ended the story. Mission complete!

So taking on that finished story theory, I reworked the room hoping for a more productive ending. 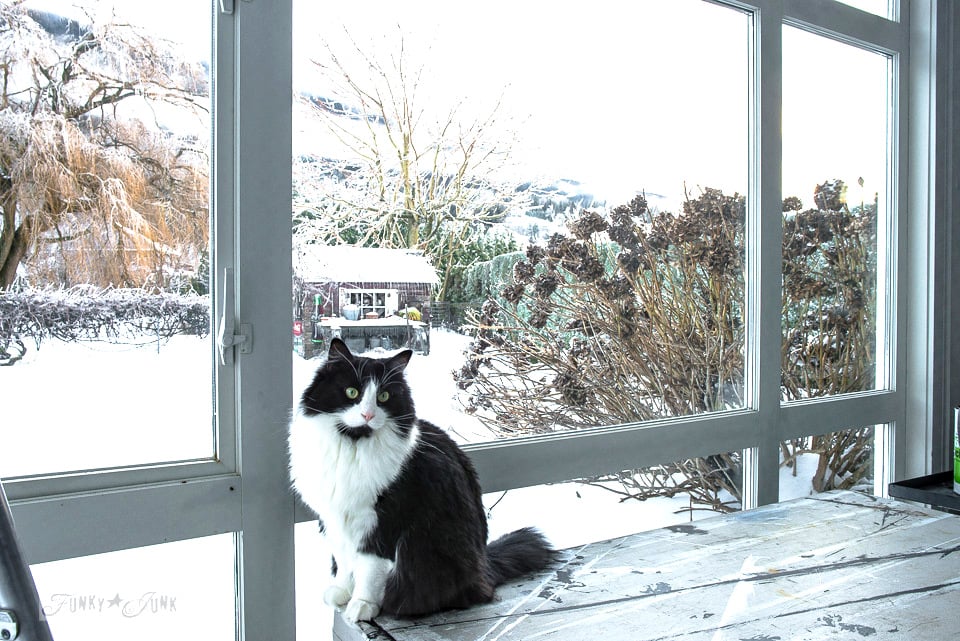 Sorry kitten, but I’m swapping out your beloved paint table for the prettier wood table. You’ll look prettier on it too! 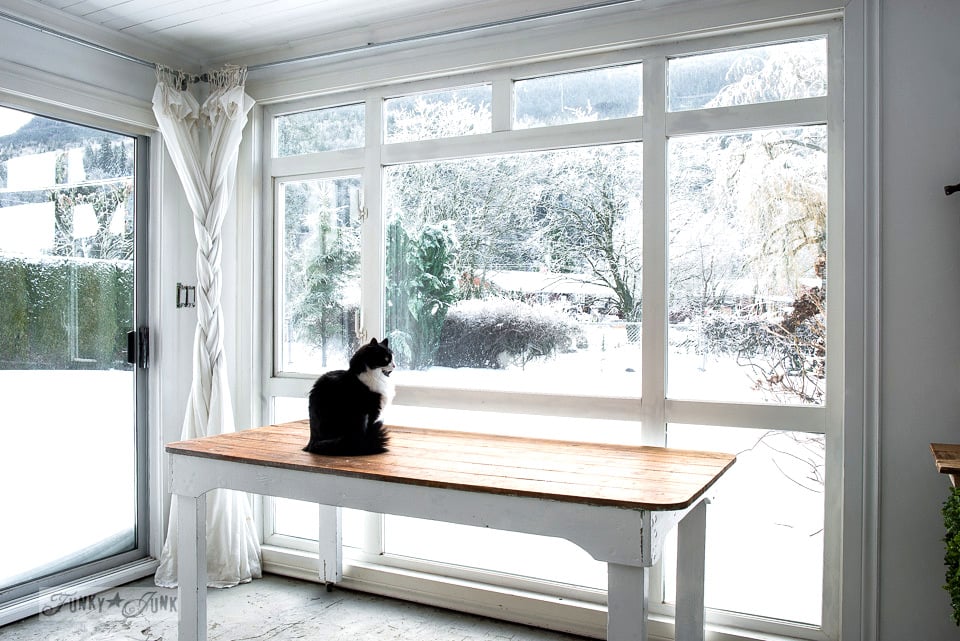 And in about 30 seconds, Skye forgave me. It fit perfectly and the lighting will be fabulous when shooting small objects on it. 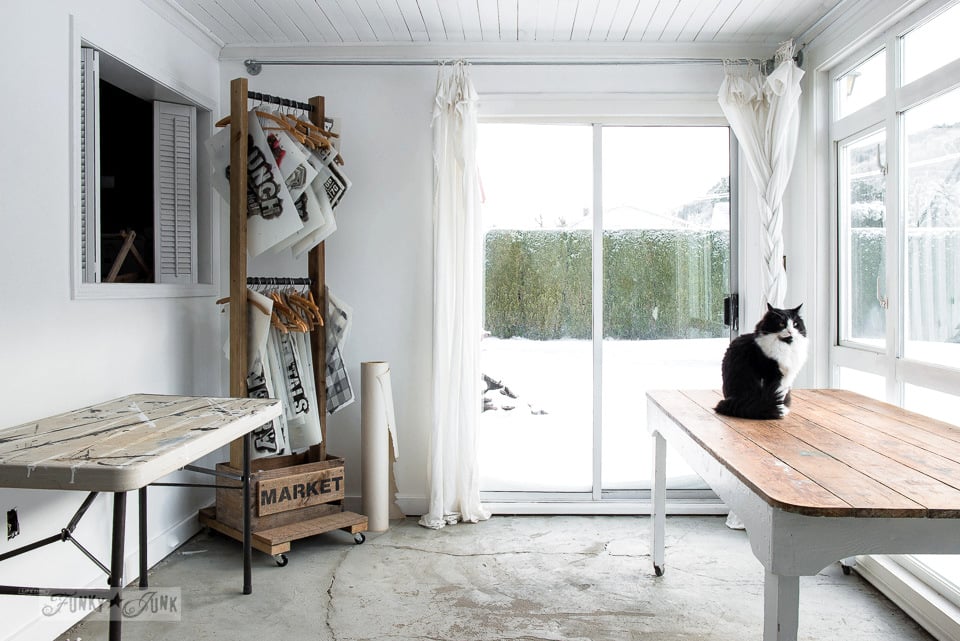 Then the stencil trolley got moved to the far corner of the studio, which fit perfectly alongside the paint table. 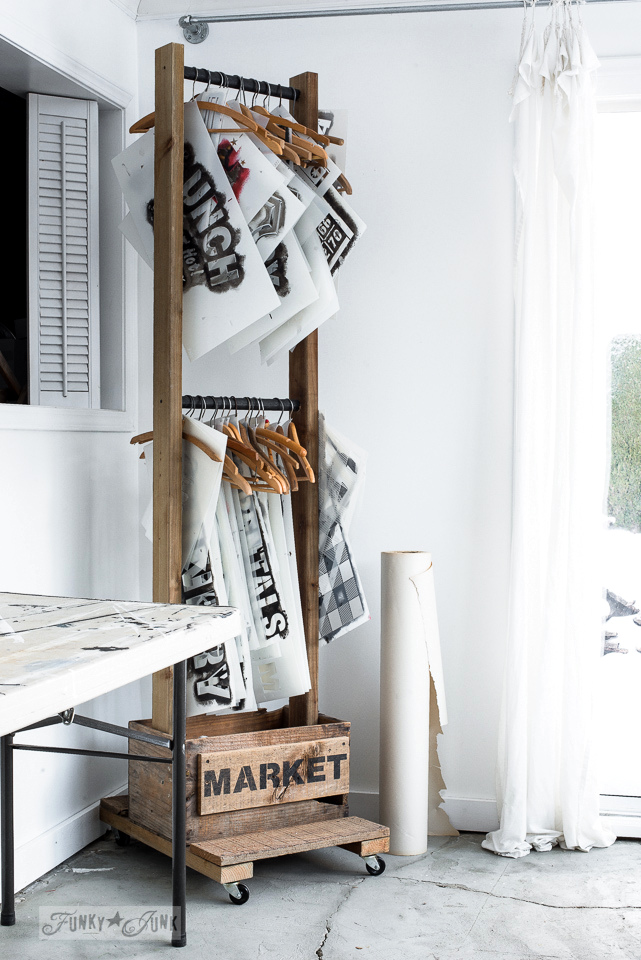 In a pinch, the trolley and table can both be moved if I wish to use this area for a backdrop as well. Which I rarely do, so this was a good place for the tools of the trade. 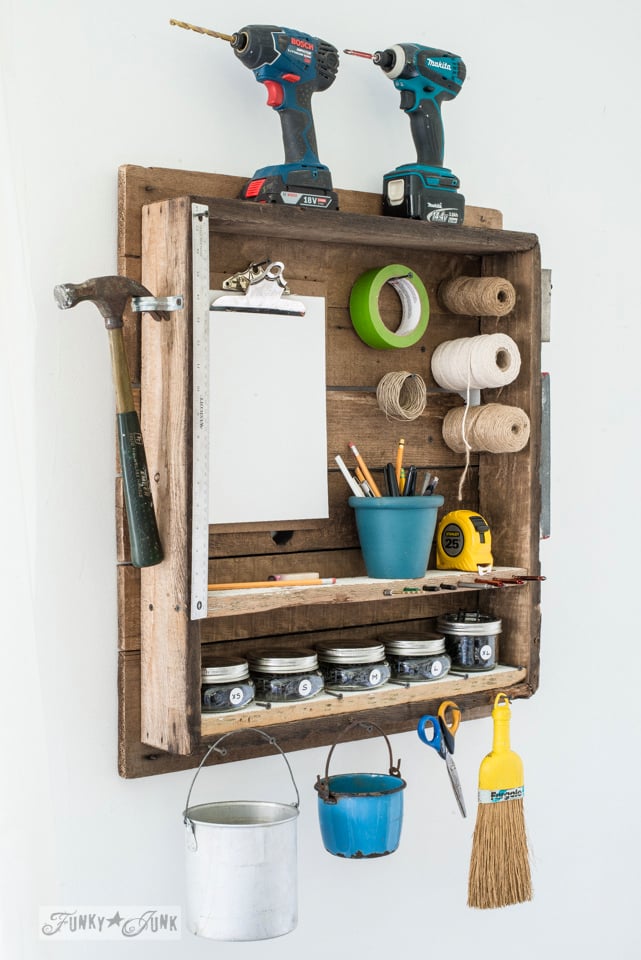 To the right of the farm table, I left the tool station for now because it’s needed and not totally in the way.

I’m still deciding if I should make the shelving section larger. I always seem to gut the little cupboard to use for shoots, so that doesn’t help much for storage! 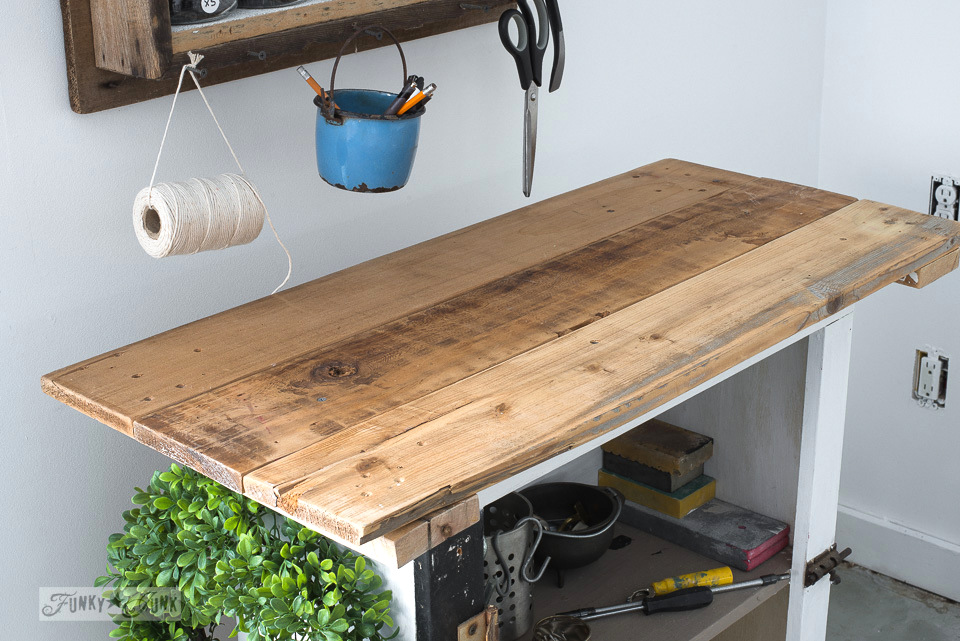 The cupboard’s top was a little small for true productivity, so I just added an upside down reclaimed wood tray to instantly gain a little more work space. 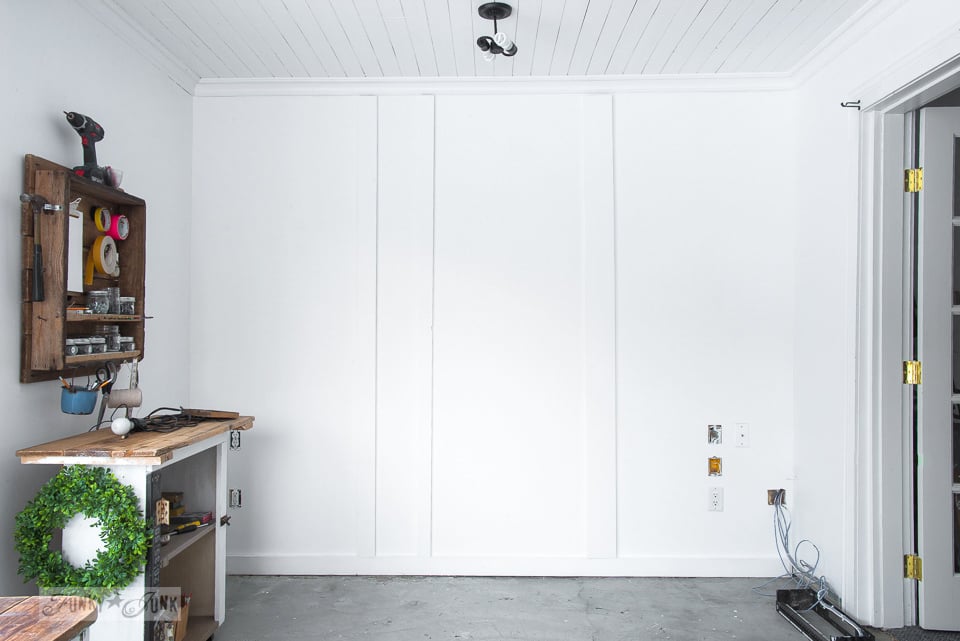 All that said, the big shuffle ultimately gave me the big white wall back!

I’ve since added a vertical board to cover the plugs on the right as well.

As for those wires and box thing, they have always been the bane of my existence… one day I’ll figure that out too.

I’m just glad to have the wall back without all that shuffling chaos. 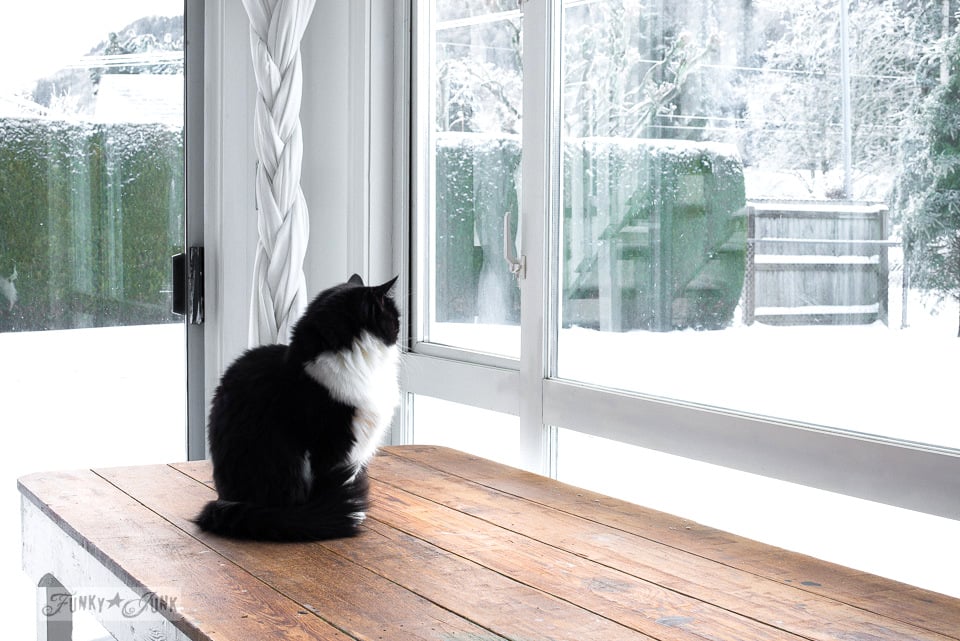 I don’t mind some partly written stories. As long as they are left in a somewhat productive state.

I think it’s when we cut off those short stories a little too short and start too many others, that’s when true chaos reins.

Cordless phone lost again? Yep. That’s why corded phones will always have a place in my house.

I can’t cook! But I guess it would help if I stirred the pot instead of running to the computer…

Getting home without your cell phone… that is still sitting on the bank machine. (that was fun) 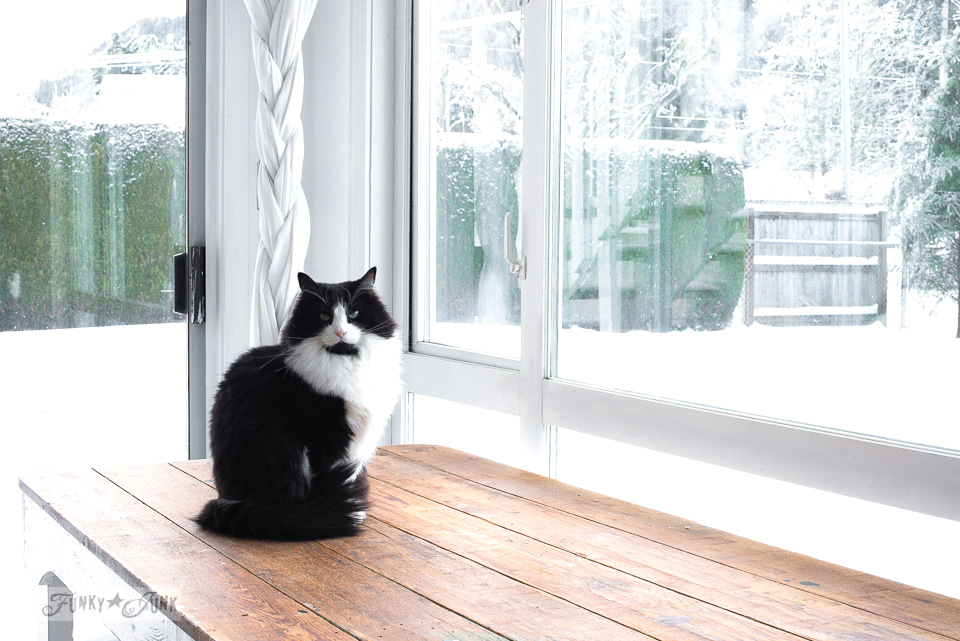 Here’s to finishing more of our short stories… for a chaos free new year.

Do your stories tend to end a little short too? What’s one you seem to tell over and over?

34 thoughts on “A finished story through a photo studio reshuffle”